Now in came the animals two by two, hippopotamus and kangaroo

The week fell a little short of being a full, post-a-day on my mathematics blog. That's a bit odd for the time during an A to Z sequence, but I've been doing two a week rather than three, so there's slack time and publishing space. You can have your Reading page show the articles as they're published. Or if you prefer you can put them in your RSS feed. And if you were just waiting for me to gather them here, then here's the result:

And don't you want to know What's Going On In Alley Oop? Who's Writing Alley Oop Now? September - December 2018 was all reruns, but they're surprisingly timely reruns considering they're set in a world set into poverty and starvation and social unrest by climate disaster that the characters ... aren't doing anything about or even facing directly. Um.

Well! Here, I've got a bit under a week's worth of Kennywood 2017 pictures left. 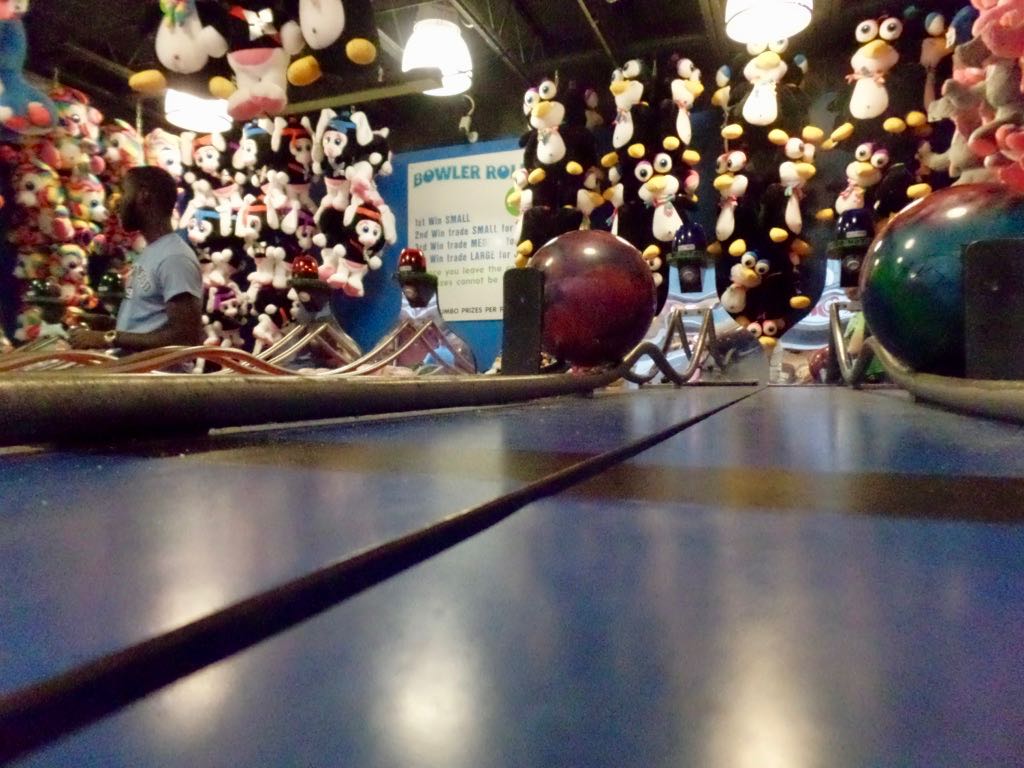 Another attempt at the Bowler Roll game! And another attempt at an arty angle that makes ``roll a thing'' look suspenseful without motion. Unfortunately I think the ball had already rolled back to the stopping post here. 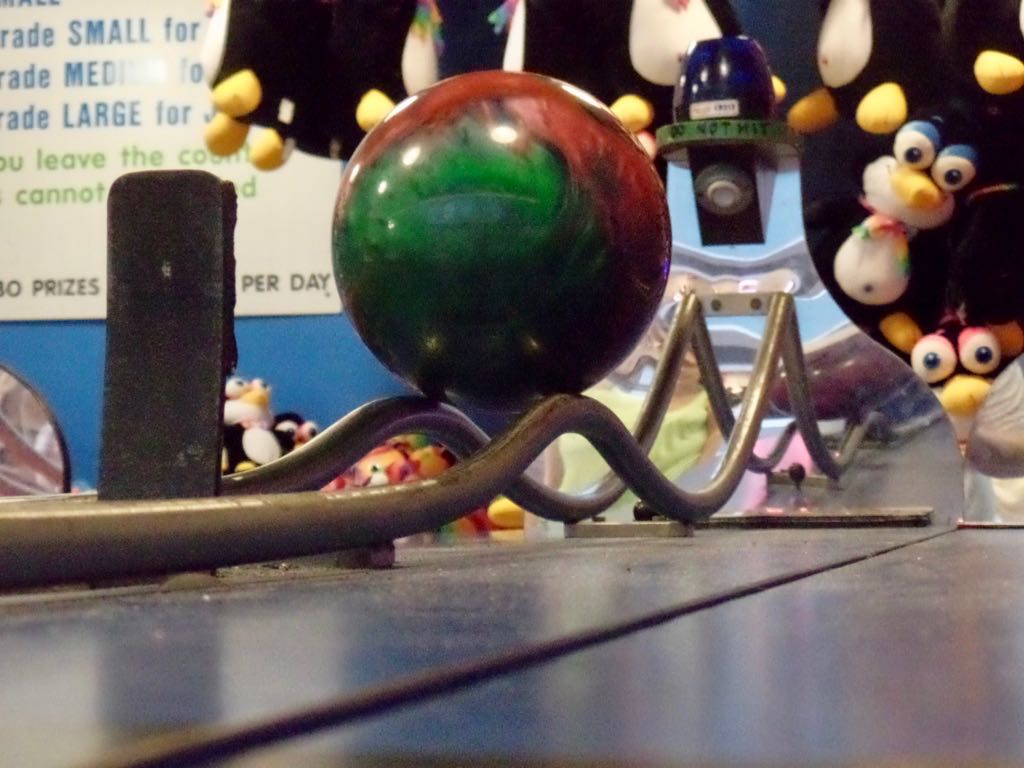 There. How's that for suspense in the Bowler Roll game? 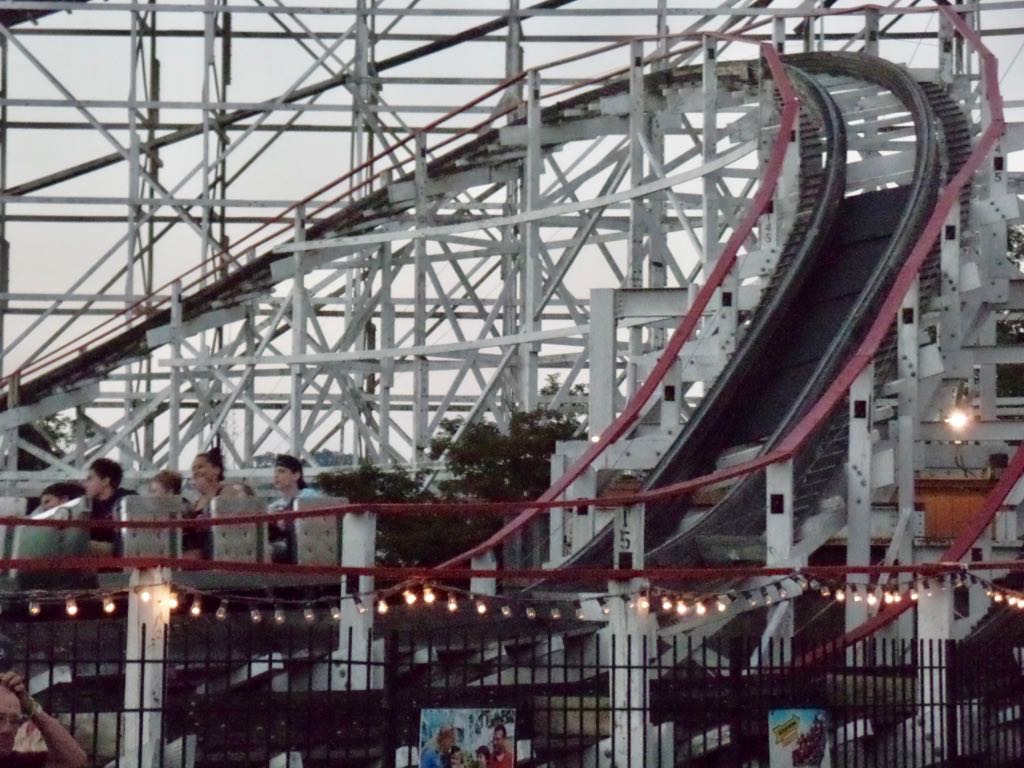 Thunderbolt! This is part of the 1968-era expansion of the Pippin roller coaster, and a part that you have to walk under in order to get to the launch station. Also part of the many turns to the right which make the ride forbidden for single riders (they'd be thrown around like rag dolls) and demand the larger passenger ride on the left. 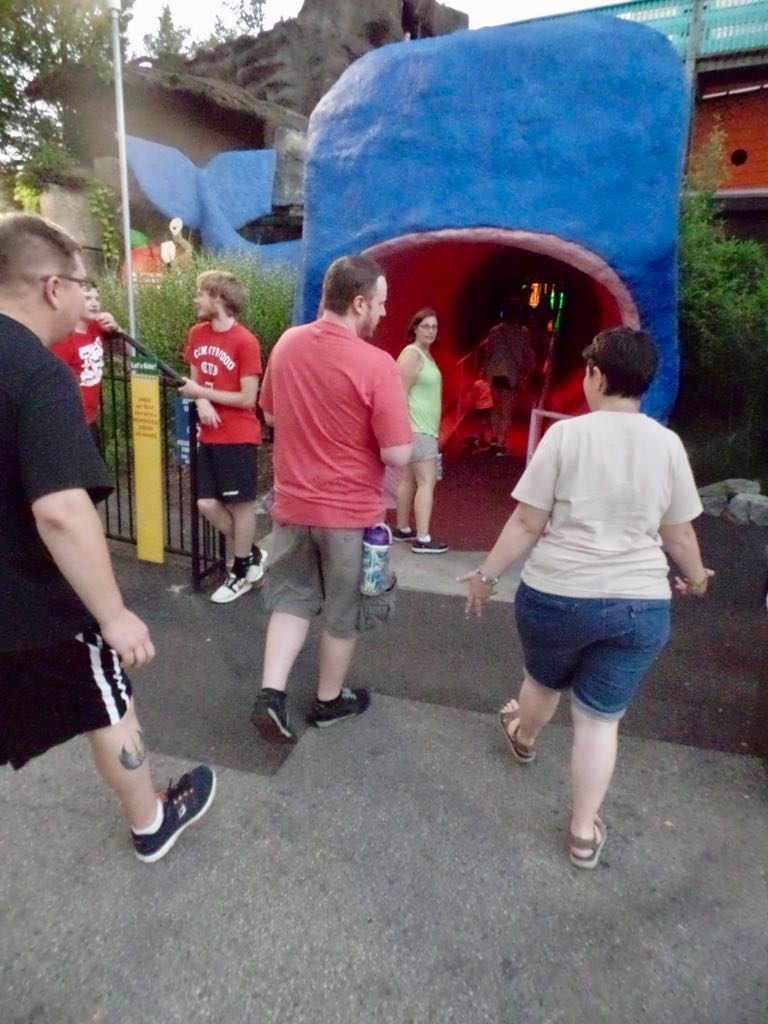 Noah's Ark, since its renovation, has you enter the rocking funhouse-style ride by stepping into a whale's mouth. The 'tongue' is a spongey soft matt that doesn't feel secure to step on. (The ride originally had that too, but in the 90s was renovated away to a cave opening.) 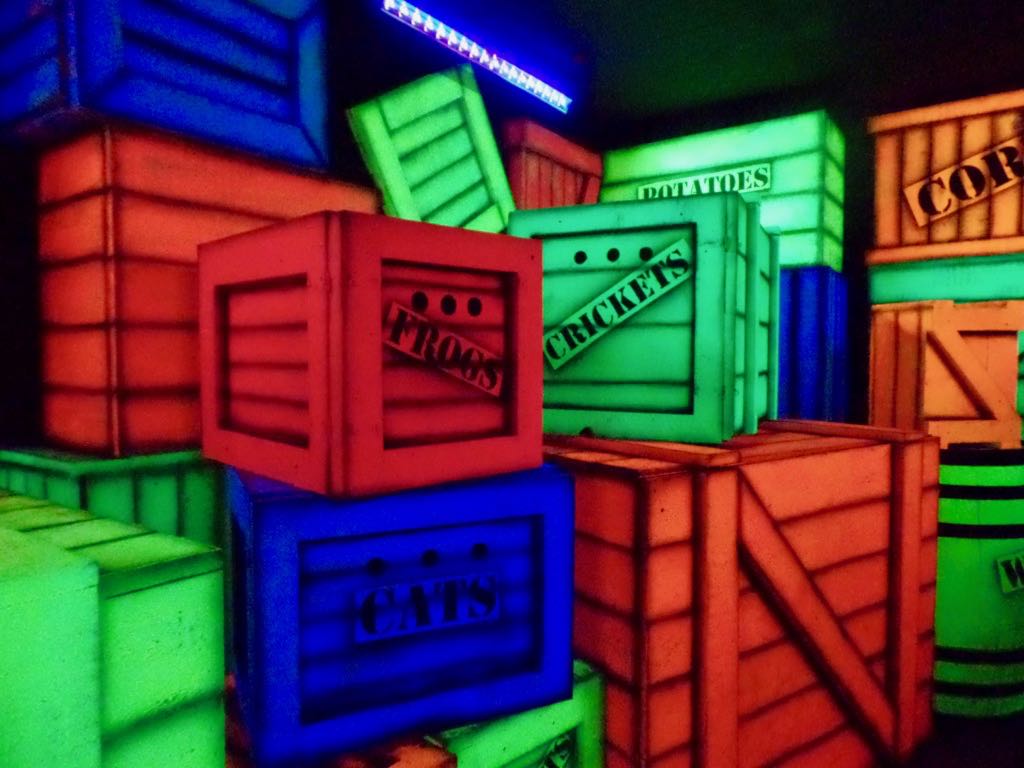 Fluorescent boxes in the anteroom of the Noah's Ark. 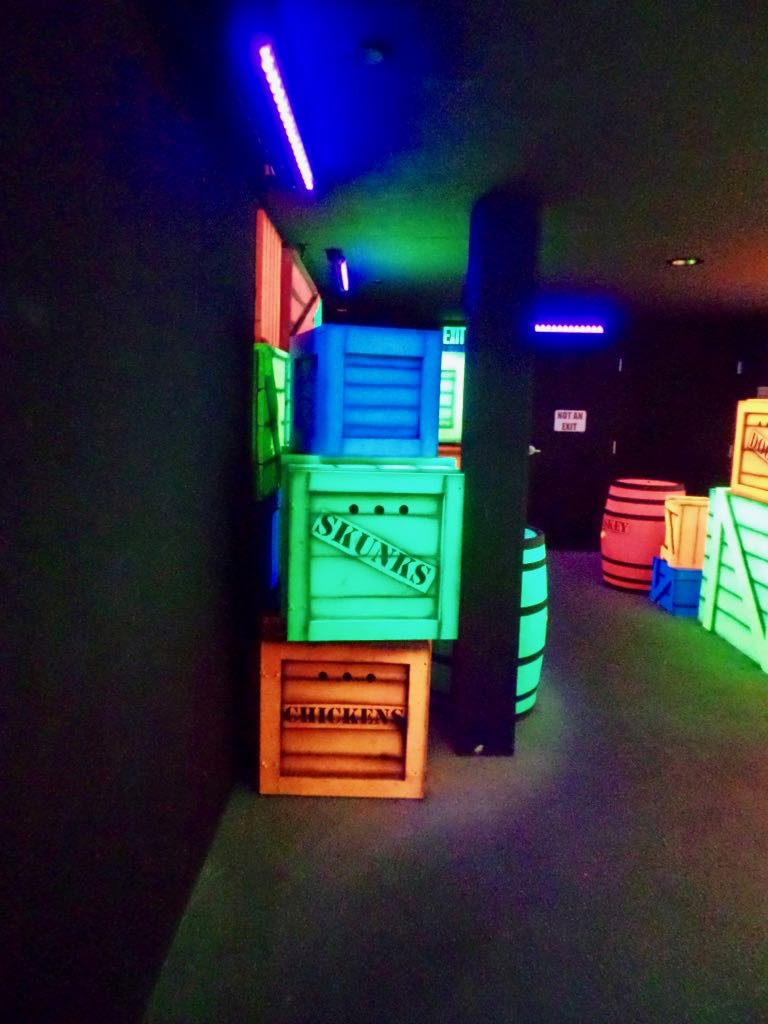 More of the fluorescent boxes. Many people did put their noses up to the airholes in the Skunks box but I could not tell you what their fate was. 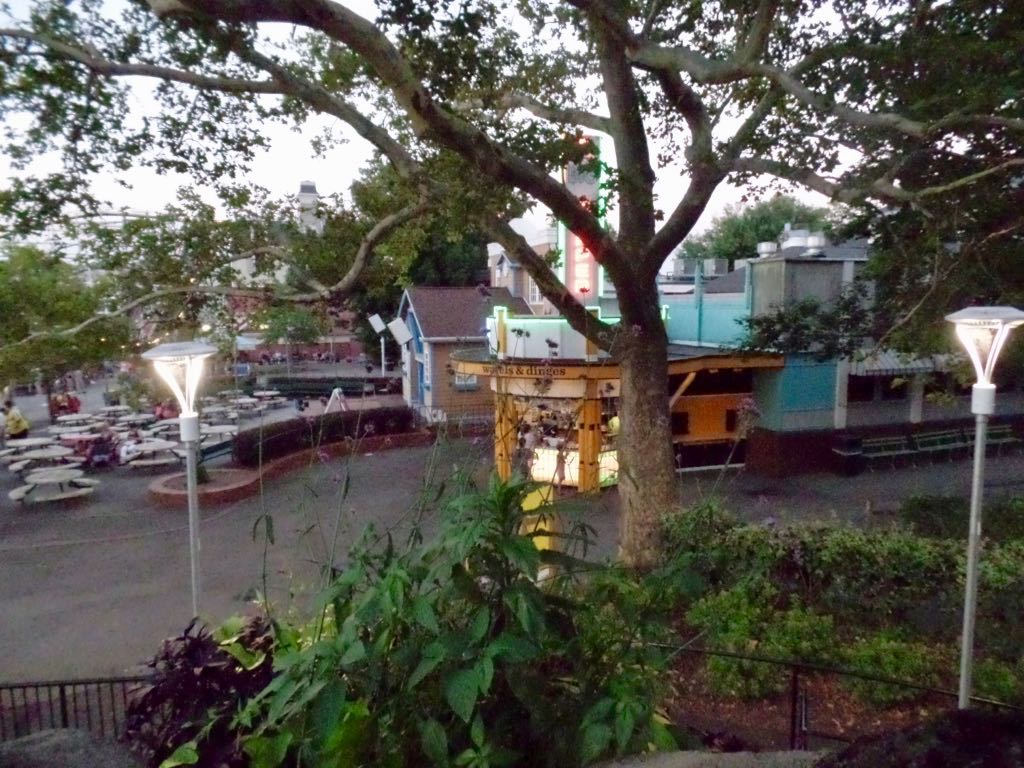 After the fluorescent-box room there's a couple stairways and displays and such, and you climb up to the top and emerge into the open air some. Here, a look from the top of the attraction. A tree obscures the Big Dipper stand, which used to be an ice cream parlor and is now a ``wafels and dinges'' stand. 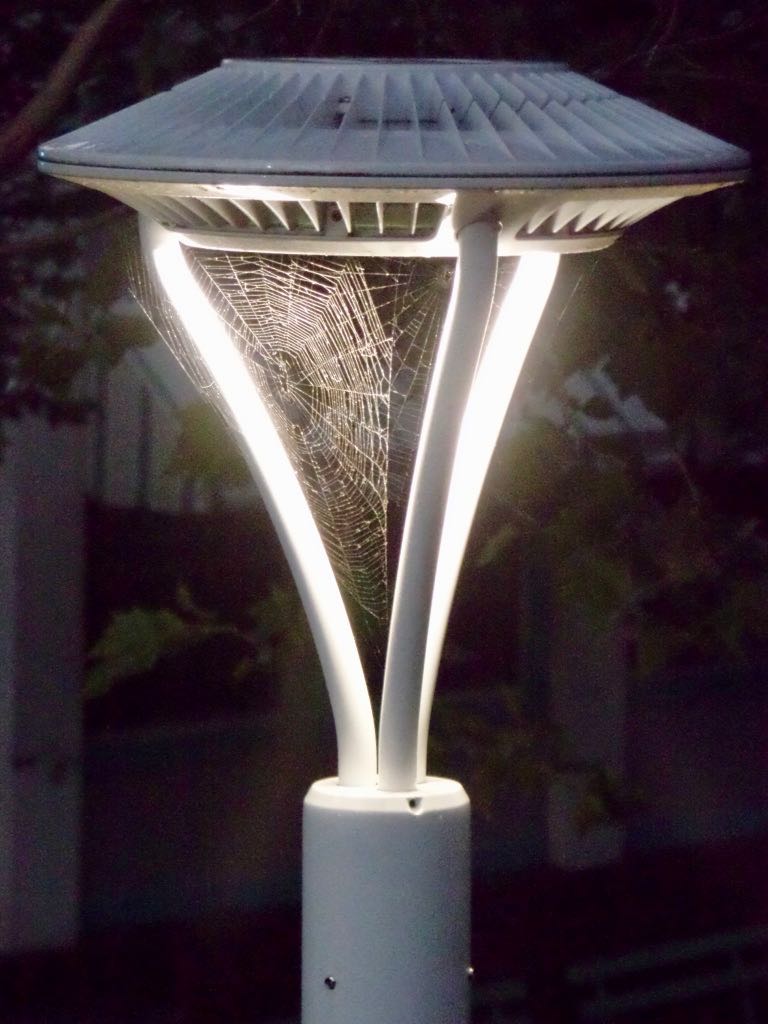 Not an official part of the Noah's Ark attraction. But if a spider's going to go building a web in such a photogenic location I'm going to photogene it. 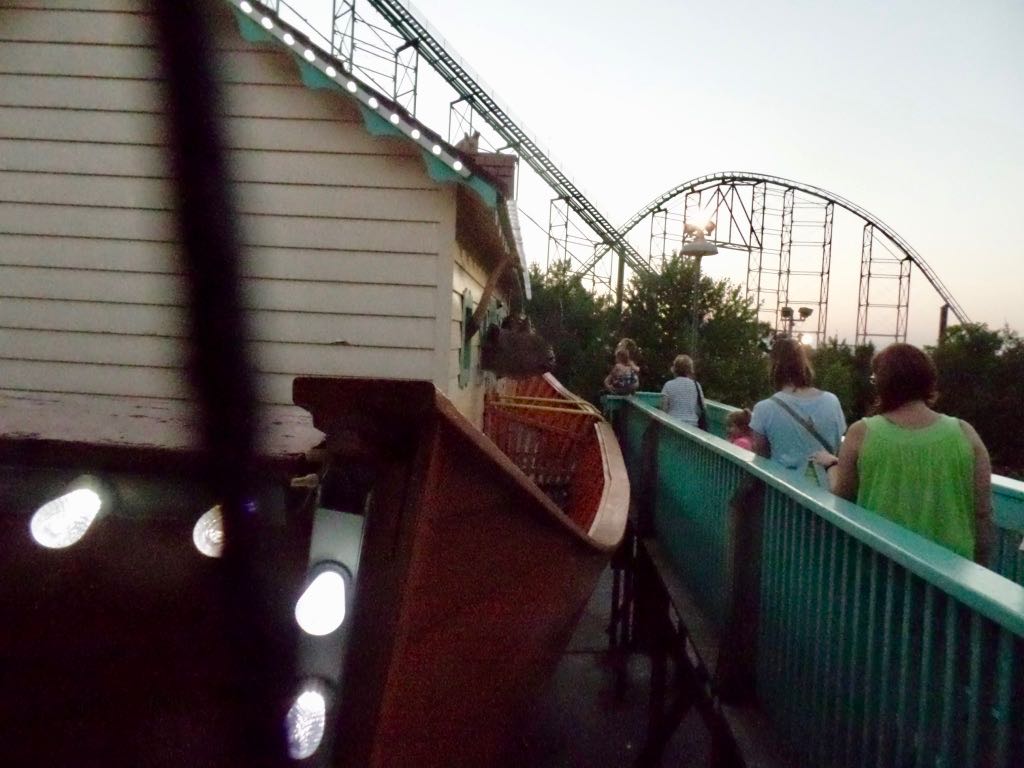 The gangway between the entranceway, which doesn't rock, and the main part of the boat, which does. It's along this gangway that there's the chance to go photograph ``wafels and dinges'' and stuff, such as in the background here the Phantom's Revenge roller coaster.

Trivia: By February 1862 the Nashville nad Chattanooga railroad had no less than 1,200 broken rails, reportedly; other railroads withdrew their rolling stock from the militarily critical but damaged track. Source: The Railroads of the Confederacy, Robert C Black III.

Currently Reading: Step Right Up, Folks!, Al Griffin. Griffin gets so weirdly snippy about apparently minor things or really judgemental. Like, he's crazy annoyed with Disney parks, for example, which is weird considering how he likes dark ride attractions. Disney was about the only amusement park in the United States putting any money into them. And he lists three dark-ride manufacturers, naming one ``overpriced'' and another ``ho-hum''. This is really funny in retrospect since the one names as ``ho-hum'' is Pretzel Amusement Rides, generally today considered to have been the best maker of such. It's kind of sad he was born too young to make a living being petty and snarky on the Internet.