Girl you just don't realize what you do to me

First Friday of the month is usually time for pinball league at Marvin's Marvellous Mechanical Museum, near Detroit. But they weren't having a league meeting this week; it's postponed to next Friday. This left us with an open night. So instead we went to a pinball event. This one in Frankenmuth, the town with Bronner's Christmas Wonderland and all that. We didn't have the time to go prowling around there, though; I'd had too much to do for work and stuff.

This was at the arcade at the Bavarian Inn Hotel, a place whose existence we knew about but which kept evading us in previous visits. It turns out to be a hotel that's near the Bavarian Inn, which we knew pretty well, but across the river and this modest covered wooden bridge. The Hotel is about the size of Connecticut, and getting around it involved about fourteen different hallways and a stairwell that, when we tried to leave, was closed for the night. The event ran pretty long and it was mostly my fault.

The pinball event was run by AJR, a past state champion and always a strong contender for champion this year. He was just running, though, not participating, which gave the rest of us a chance. The format was Progressive Strikes, which has been slowly taking over Strikes tournaments. In a Strikes tournament you take a strike each time you lose a game, and you stay in the tournament until you get some number of strikes. Progressive Strikes is designed for four-player groups, worth more ranking points in the International Flipper Pinball Association's eyes. In this, the winner of the four-player group gets zero strikes, the second-place person one strike (as they lost to one opponent), third-place two strikes, and fourth-place gets three strikes. To balance this you have more strikes; this tournament would play to nine.

bunny_hugger hopes to run a ten-strike Progressive tournament later this month and so was eager to see what it did play like.

The place was a fun setting. Not many pinball games, but all of them fresh pinballs of the last couple years and in good shape, playing pretty well. The game area of the hotel was a bunch of arcade venues with mostly redemption games, but a fair number of arcade games and of course the five pinball games. One was Jersey Jack's The Wizard of Oz, the first one I've been able to play in non-timed mode since the one left Grand Rapids. Marvin's Wizard of Oz gives you three minutes of play, and redemption tickets for various objectives.

The pinball machines were also set to redeem tickets, interestingly. And were paid for by using magnetic-strip swipe cards. This led to the question: well, in a multiplayer game who gets the tickets on the card? AJR believed it was whichever card swiped the last credit used. Or maybe the first. Hm.

And how was the playing? Well,

bunny_hugger started out as a stone cold pinball wizard, winning outright two of the first three rounds and coming in second on the other. She even put up high score #3 on the Stern Star Wars game, which is really amazing because the highest of those scores requires not just good play but good manipulation of this complicated score-multiplying feature. She didn't manipulate the score-multiplying feature, though; she just set it and left it where, it turns out, it was exactly right for her game.

Unfortunately it turned sour pretty fast. She was struggling with Grauniads of the Galaxy but had a fair chance to make up the difference, when the ball kicked out of a scoop and into the drain. But the ``Ball Save'' light was flashing, so I even said, ``It's coming back''. It never did: she lost the ball and with it the game. This sort of stroke of bad luck hits everyone, yes, but she was sour about that. And then The Wizard of Oz --- a game I love, but that she wasn't having much luck working out --- smacked her down hard, with a game that was not just low-scoring but which lost third place to someone else on the bonus. The difference was a couple dozen points, and her mood was soured further by everyone wanting to remark on how close a loss that was. In almost no time she went from the person with the lowest strikes to being on the brink of being knocked out, which did happen the next game, on another round of The Wizard of Oz. And that after somehow the swipe card she'd had, with a couple of dollars and all the tickets she'd won so far in the day, vanished.

And me? I didn't do as well as

bunny_hugger the first couple rounds. But I did win the raffled-off prize of a Stern-logo illuminated lucite pinball topper, a sign to put above a pinball machine. And I kept getting drawn to play The Wizard of Oz or Grauniads of the Galaxy, two games whose flow I just somehow had. I was even able to put up high scores on the tables, which always feels great in competition play and has strategic advantages. It can rattle your opponents so they play worse in future games.

And then somehow suddenly ... there were two of us left, me and someone we sometimes play with at Marvin's. Both with five strikes. We would have to play at least four and maybe up to seven more games to decide the winner. AJR offered the option --- as is common in Progressive Strikes tournaments --- to manually add strikes to both our standings so we'd be in sudden death. This is a great timesaver. But it does mean the tournament overall is worth fewer rating points, since there's fewer games played by the champion. It seemed to me, well, we spent an hour driving here and would drive as long back. With that investment in time, why not play as much pinball as possible? The answer is that I play worse as I get tired, but I figured, who doesn't? It might work out.

My opponent, who lived ten minutes away, was up for it. And so, after I got a pretzel and soda from the concession stand, where the slowest people in the world were making buying food difficult, we started a repeated head-to-head match which took us to all five tables at the venue, some a couple times over.

Throughout the tournament we got assigned playing order randomly. Weird thing is during our head-to-head play, it kept turning out that the first player won. Not sure what's going on there. But it did make the tournament drag out. If the last player in a match has a blow-out ball, the match can end early. But if the first player does? The second player has to slog his way through, even if there's not a realistic chance of catching up.

Well, in the end, I lost. It took six of the hypothetical maximum seven games. And we both had a lot of really great playing, too. I took home a cue plastic loving cup, and possibly even enough IFPA ranking points to cover the tiny gap between me and the person ranked just ahead of me in the race for state finals. (I'm all but certain to qualify for state championship. I could plausibly move up one spot. If the rest of the month sees the best sustained play of my life, I might move up two spots.)

The tournament took a long while. This would be an ominous sign for

bunny_hugger's tournament except that much of that bulk was people wandering off for food, which will be tightly controlled. And the rest of that bulk was me and my opponent playing out all our strikes; that's prohibited by her rules.

Afterward, it was past 11:00, and stuff was shutting down. We explored the gift shop a bit and I spent a lot of silly time untangling a marionette with a knotted bunch of strings.

bunny_hugger pointed out, yeah, they're not going to pay me for that. But I felt good about it until I noticed one of the strings was broken so the head couldn't be moved anyway. I did finish the untangling.

bunny_hugger picked up a cute little souvenir for her father (don't tell him!) and we only regretted that it was too late to do anything else in town.

Despite the disappointments, it was a pretty good little night out. Might do it again sometime. The tournaments are once a month; we'll see what we can work out.

Currently Reading: One Time Fits All: The Campaigns For Global Uniformity, Ian R Bartky. You know this is a book designed for me, and me alone, when the introduction has Bartky explaining how he wants to overturn the conventional wisdom that the International Meridian Conference of 1884 was a success. And yet the Due Date sticker clearly shows this book was taken out no less than five times before I ever touched it! So weird. 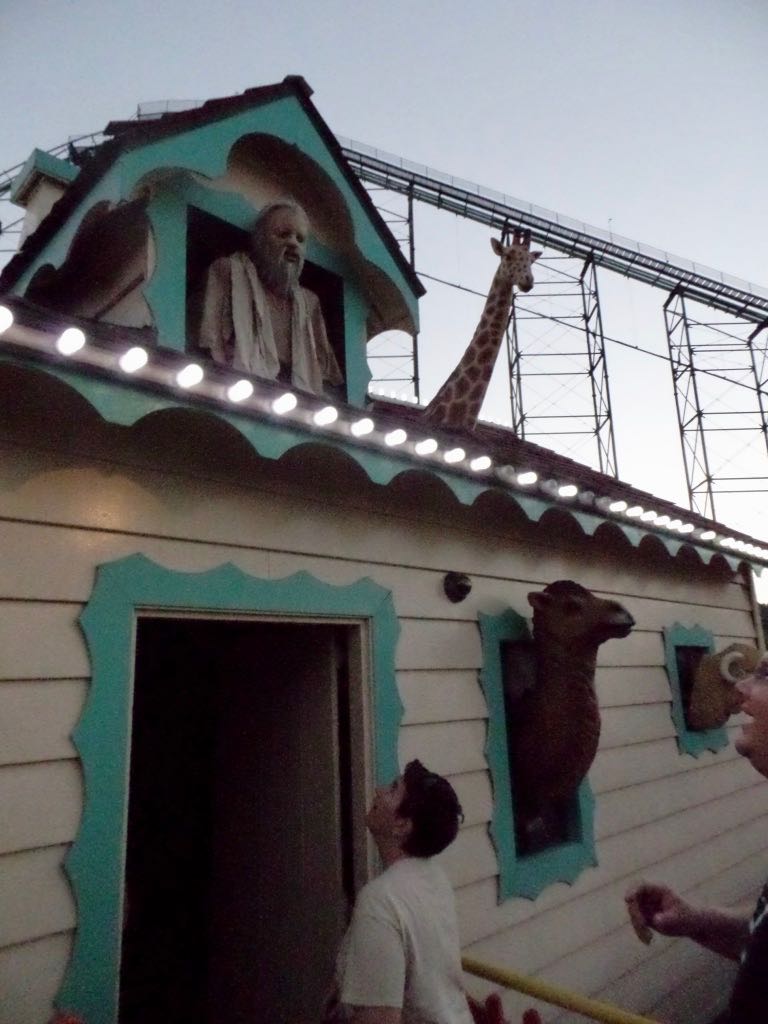 bunny_hugger gives a quick headsup to Noah before entering the second half of the Noah's Ark, an indoor funhouse that does rock steadily, even when you're on the steps. 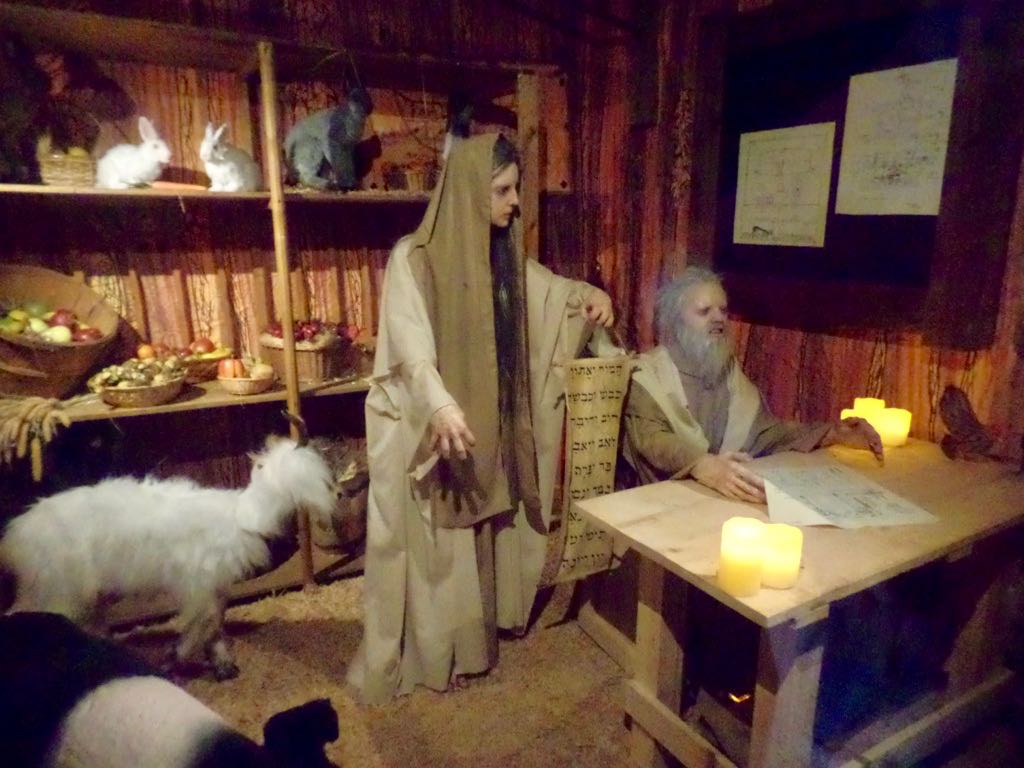 Noah and wife, along with architectural plans for the Ark. It's one of the many interior scenes of the Noah's Ark ride. I'm supposing that at least a lot of these are taxidermy animals. I don't know whether Noah's Wife is holding a scroll that parses legitimately. 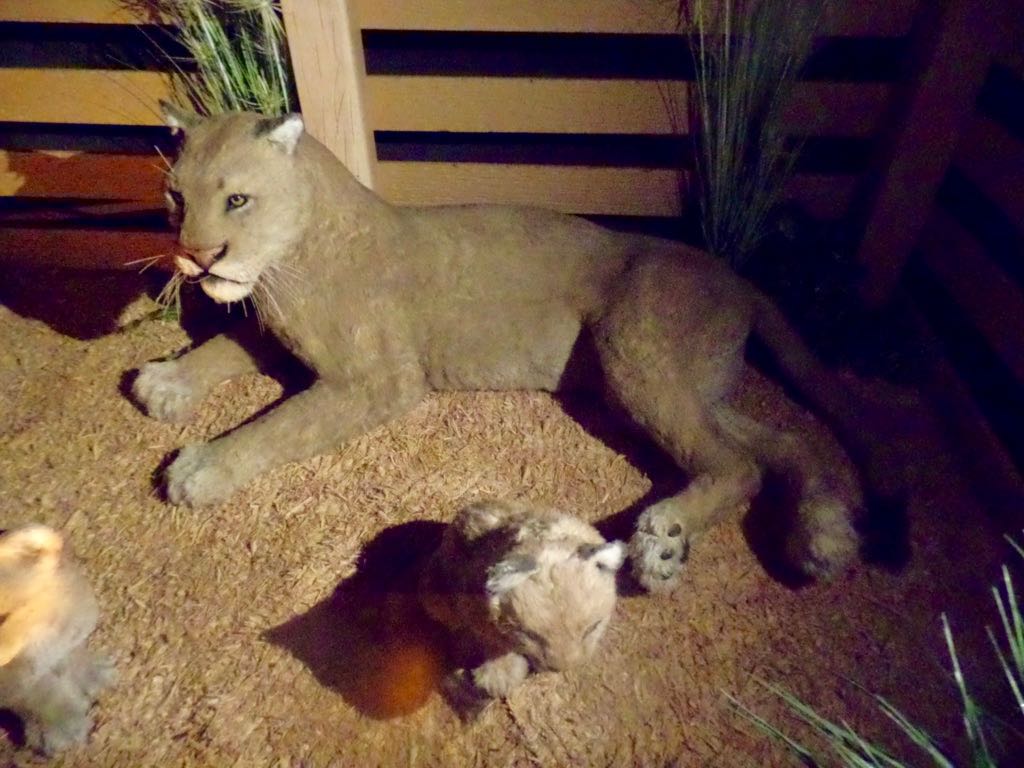 More animals on display inside the Noah's Ark. Given that the place is almost entirely dark and behind glass and rocking I'm amazed I got a photograph this good.