That Thanksgiving was so early this year presented a problem of when to get our Christmas tree. We leave the tree up until after Twelfth Night, correctly, but this does mean too early a tree might be in sad shape come Christmas. In retrospect the weekend of the 1st might have been great to get a tree anyway, since it was quite warm. On the other hand, it might have been madness to go to a Christmas tree farm the 1st of December when it was like 55 degrees out. When we did go, this past Saturday, it was much closer to freezing.

Also apparently all the pines we might have gotten were gone. We couldn't find any Scotch pines tagged as permitted to cut down. And few that were tagged at all. We could find more white pines, but few of them tagged and none of a size we cared for. This sent us on a journey of exploration of other tree types which took us over an hour and ended up in the blue spruces. Which is funny as along the way

bunny_hugger had rejected some concolor firs as ``too blue, not green enough'' and here I nominated the blue spruces. But we did find one that was pleasantly green. It was shorter than what we'd figured on, but it was so cute as to more than make up for the size gap.

bunny_hugger's parents, waiting patiently in their car. They had come to the same Christmas tree farm, as ever. And had bought a tree from the precut lot, as they always do. We had told them we would happily cut them a fresh tree, as we always do. The pre-cut trees stop drinking water too fast. This one hasn't been reported to have dried up yet, but give it time. I said next year we should get there a half-hour before the time we've agreed to, so that her parents won't be able to decide it's too much trouble to have us cut down a tree on us. We make this resolution every year too. Anyway,

bunny_hugger's brother had called them, so they were able to pass the time talking with him.

Then we went back for the other tree. We like to have one upstairs and one downstairs tree. While waiting for the tractor to take us back to where there were no pines, we'd seen a great candidate for the small upstairs tree. While walking back with the blue spruce, we saw even better ones. Making two trips seemed like the less troublesome one.

I cut down our first tree, using the saw we'd gotten for those weed trees that turned out to be some odd kind of cherry. The saw's good and sharp, despite the bend it got from the cherry-tree clearing. It cut through that blue spruce in less time than

bunny_hugger took to get her camera out, so there's no pictures of me felling it. This second tree was harder, though, owing to the many tiny branches and vines growing around it. The saw motion got diffused among useless cuts. Well, a couple false starts and I got a good notch going, and from there was able to get the tree down fast enough.

bunny_hugger's parents brought the trees back to our house, where we were able to set them up nicely now that we have the drilled-center-post stand for both upstairs and downstairs. They wouldn't stay, though, not for a fire or dinner or anything really. They said they needed to get back to the dog, true enough, and maybe worried about being driving after sunset. Still, it was a short visit.

Sunshine showed no interest at all in the tree as it was brought in and set up. Later, she still avoided going to the tree, possibly because she would have to cross the slick wood floor rather than the safe rugs. Finally yesterday she started hopping carefully up to it, using the fleece of her area as a staging area. And she's spent some time hiding on the far side of the tree from us, nibbling at branches. So that's progress then.

Trivia: Soy sauce was available in New York City in 1750. It was an import from England, like black pepper. Source: Eight Flavors: The Untold Story of American Cuisine, Sarah Lohman.

PPS: Let's prowl around indoor places of Kennywood some more. 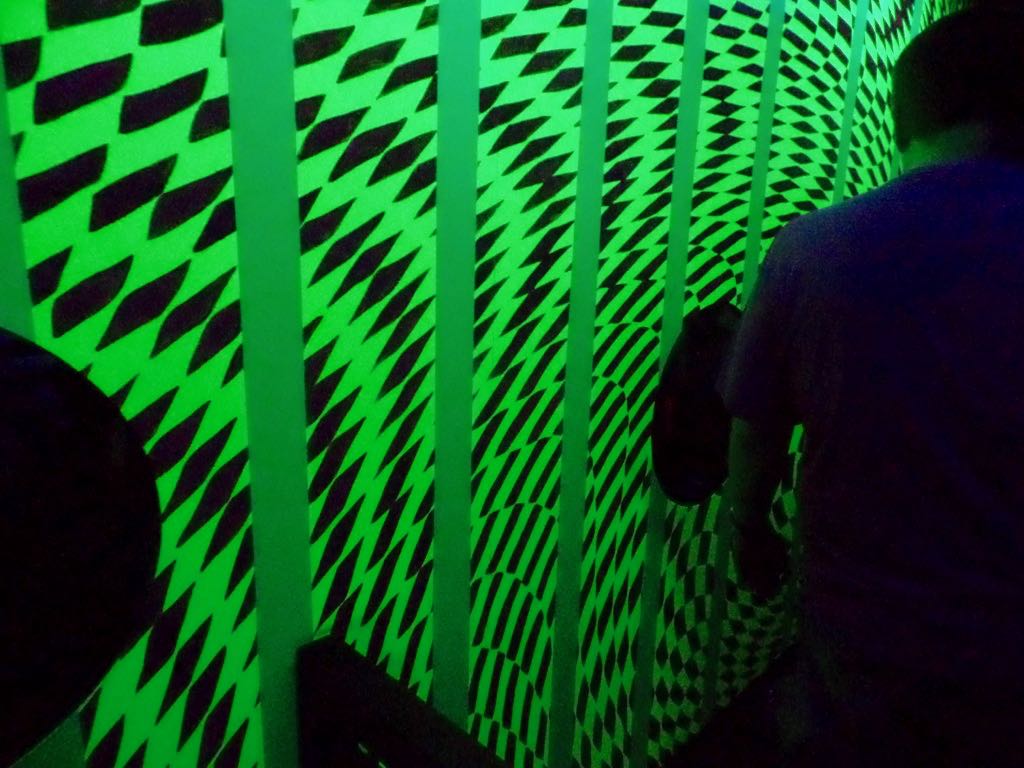 Tunnels! Part of the Noah's Ark attractions are optical-illusion and disorienting pathways like this that photograph quite well, considering. 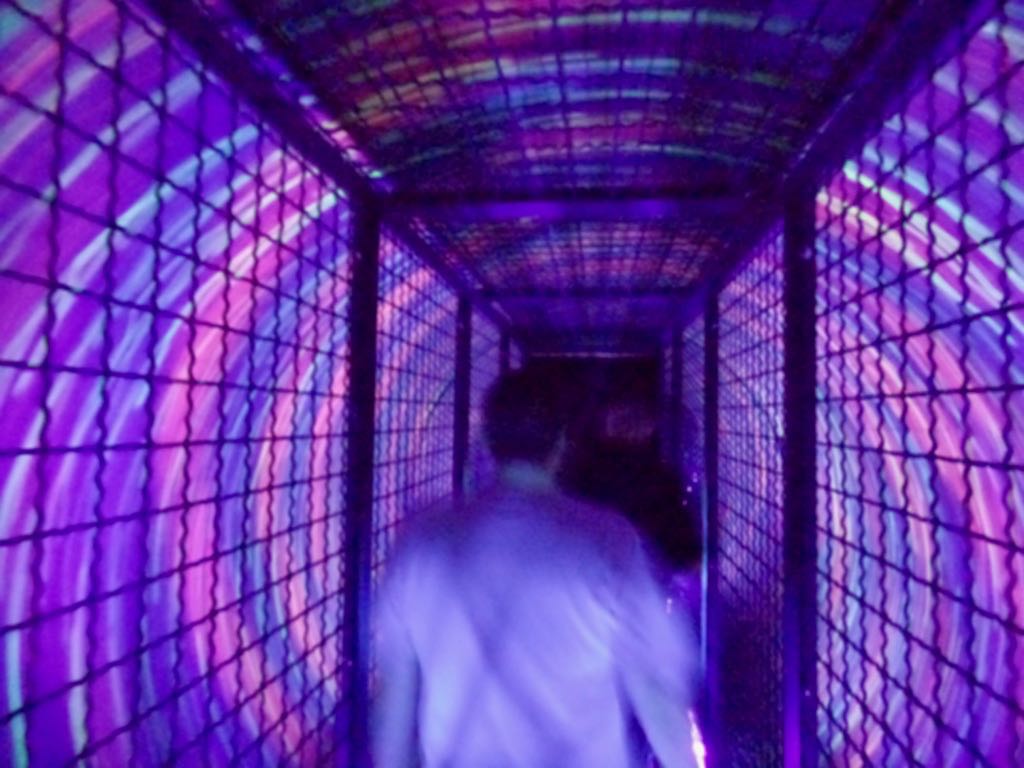 And here we wander down a tunnel, with illuminated tumbling barrel outside, and people inside warping into another dimension. 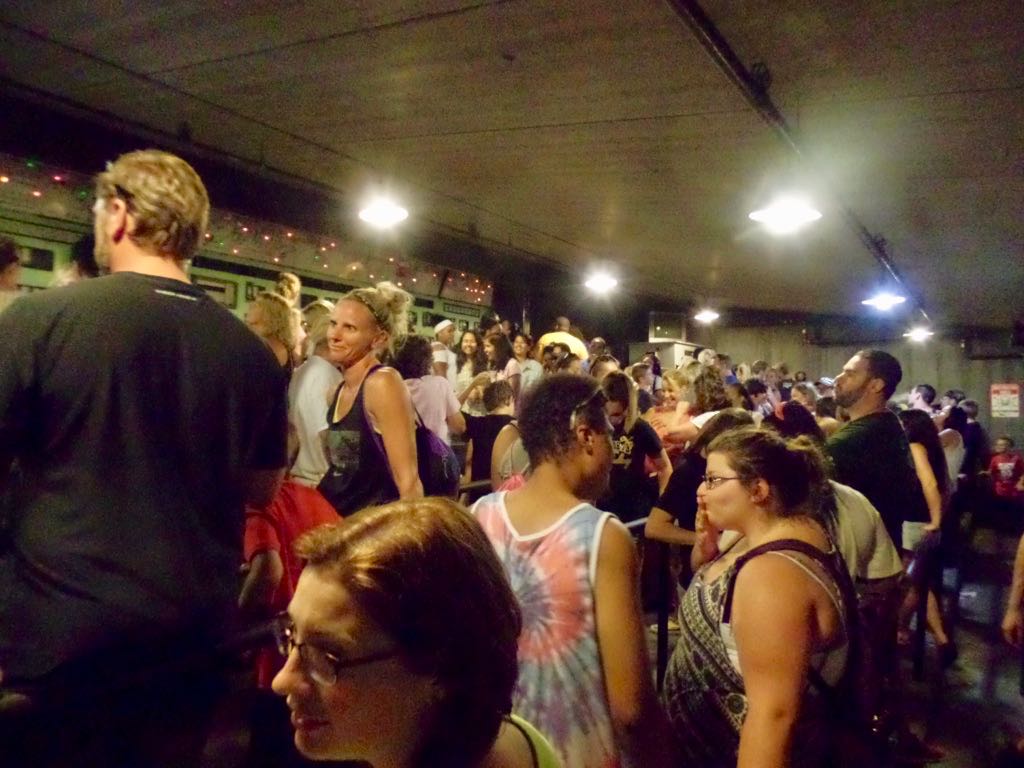 That's as much Noah's Ark photography as turned out well. Now for here? A return visit to The Exterminator with a more typical queue length.