When you hold me in your arms so tight

Oh yeah, the other pinball thing recently was the last week of the Grand Rapids Pinball League's October-to-December season. That's run as five weeks of mostly four-player groups going head-to-head. Since all the games are head-to-head they don't need to have a separate finals week. They will have one, next week, but that's considered a separate event. We might get to it, if our time allows.

Really the finish of pinball league for us this season was settled the fourth week, the one after Thanksgiving. I had a bizarrely good night, trading off first and second place in our group with RLM. RLM's the organizer of the league, the maintainer of the games, and, as it turned out, winner of the season. He hadn't yet locked in a sure win the fourth week, but he was close. Anyway my performance launched me from 11th in the league to 3rd place, for the last week of play.

bunny_hugger meanwhile had a catastrophic night, starting when a fantastic game of Batman 66 was upstaged by the fourth player. And then a bunch of last-place finishes, several of them by whisker-thin margins, as her mood got the more and more foul. She dropped from nearly tied to me in the league down to 25th.

I insisted on seeing the good for

bunny_hugger: that she would be undervalued in her group and so ready to clean up. As it turned out she didn't. She started out with a game of Medieval Madness that cheated her of a multiball, and so sank what should have been a second or possibly first-place finish down to third. And while she recovered for Scared Stiff and Twilight Zone, she had another third-place game on Total Nuclear Annihilation --- one of her strong games --- and then a second-place on Congo. She bounced up again, but not quite far enough to undo the damage of her catastrophic fourth night, and finished the league season in 17th place of 44 players, maybe 35 of them active.

I insisted on seeing doom for myself, though. Being in third place meant I was playing with RLM, with ADM, and with MSS. ADM's a past winner of the state championship. He's a good candidate for winner this year too. Certainly he'll be among the final four. RLM and MSS I'd bet will be final eight, maybe final four. And then there's me. Barring a major surprise I'll be invited to the state championship, yes, but to make it out of the first round? Hrm.

So I was preparing for a catastrophic night of five last-place finishes. And figuring out whether I'd be better off not attending: missing one night in the Grand Rapids league gives you a penalty score that's a fraction of your average the rest of the season. Four third-place finishes and a fifth would be worse than I'd get staying home, and a lot less painful. But, eh. I've never strategically skipped a league before; why start now?

Because it all went kind of daft is why. I mean, the night started like I figured, where on The Simpsons Pinball Party I put up 18 million points, one of my five strongest games ever, and was still 13 million points out of third place. But then on Star Wars --- a game that players like ADM, RLM, and MSS can really cream B-level players like me on. It's got complicated rules about shot multipliers that can make nearly the same play yield a score of 60 million (for me) or 60 billion (for them). Except that I did mess up and end at 60 million, and then ADM went and tilted at about 54 million. I didn't bottom out for the night! The next game was my pick, and I decided what the heck, go for the one I'd like to play even though they could cream me on it. Guardians of the Galaxy it was. And, sad to say, I kept bobbling the ball. But I didn't bottom out either, thanks to MSS tilting two balls out of three. And reminding me of why MSS hasn't been state champion before: he plays aggressively, and will tilt often. And get into a spiral where he plays more aggressively as he's struggling harder.

Then the fourth game, Lord of the Rings, where I put up 46 million points --- in any other group a winning score --- on the first ball while everyone else put up garbage. Second ball RLM put up 46 million and a hundred thousand points, so that when he did that I had to go over and ask him, ``Seriously?'', cracking him up. Anyway, I had a great second ball, too. I was fourth player that game, and didn't have to play my third and final ball. ... Which was a running theme of the night: after Simpsons (when MSS technically had to plunge, but his bonus took him to winning) player four won the game on a walk-off. And somehow in this killer group I had a first place.

The last game was Metallica, which allegedly has some brand-new code that makes scoring crazily higher. (And the existence of new code is funny; it's been years since the last code update was published.) I haven't really seen that happening. MSS put up like 188 million on two balls, but then, I've done that on older code.

So I had my worst night of the season. But in the toughest group of the season. One that was playing the longest games of the night. Seriously, when MSS picked Lord of the Rings --- always a long-playing game, and here with three people who could play it forever --- RLM thought it was a prank. I dropped to seventh place; that's as good as victory.

For those curious, by the way: the International Flipper Pinball Association records

bunny_hugger and I as having played in sixty events so far this calendar year. I've beaten her standing in 36 of them, and she's beaten mine in 24 of them. We haven't tied. I keep saying we're about equally good. We just keep getting into events that magnify the slight difference in our playing.

Trivia: The Eastern Penitentiary, opened in Cherry Hill, Pennsylvania, was at over $700,000 the costliest building ever constructed in the United States when it opened in 1829. Source: Waking Giant: America in the Age of Jackson, David S Reyolds.

PS: Getting to the end of Kennywood, and our whole Pinburgh 2017 journey. 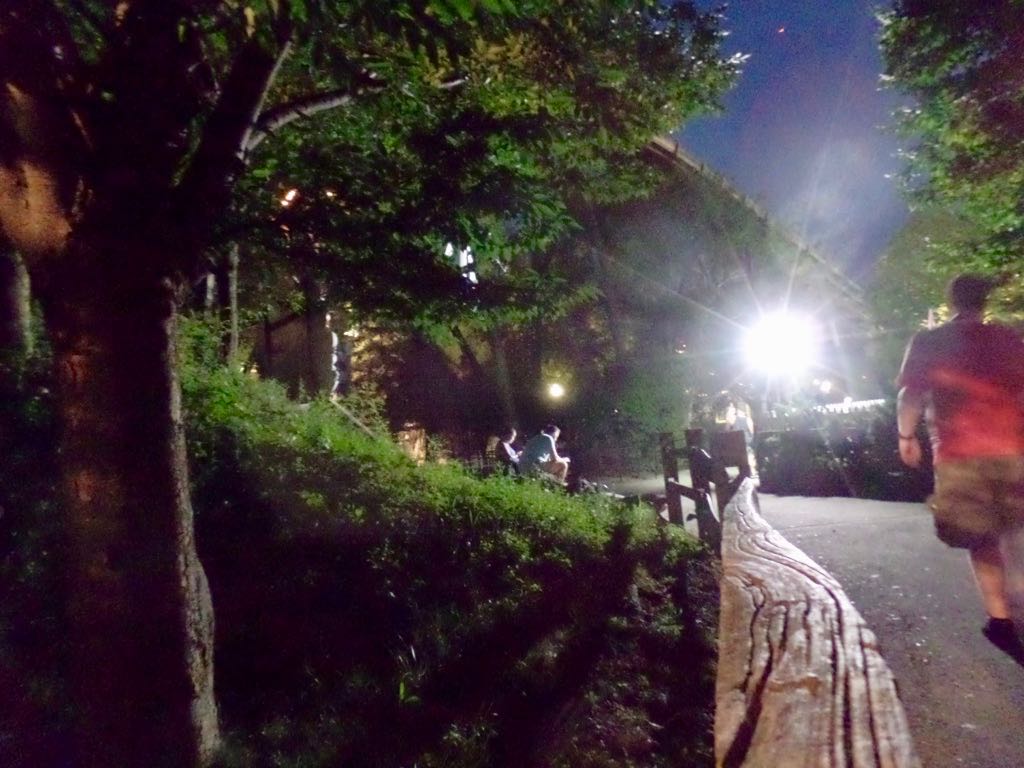 And the view outside The Exterminator, just as night's fallen. The Whip is underneath that brilliant light on the right. 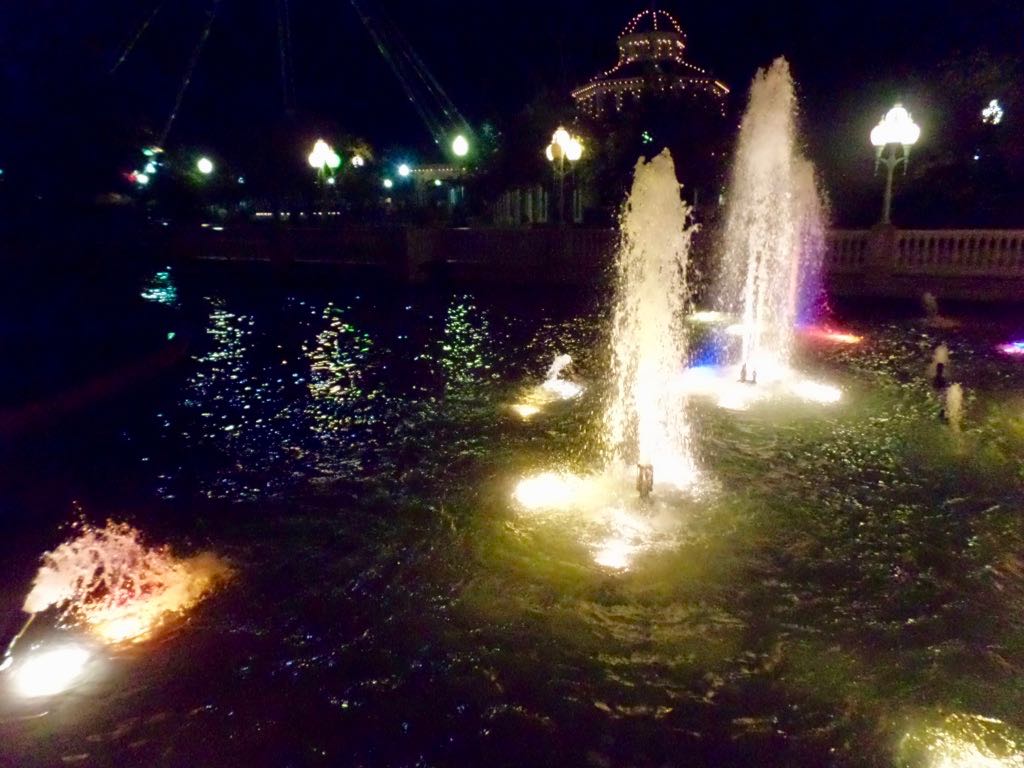 Water fountains in the Lost Kennywood pool. The Black Widow pendulum-swing ride is in the background on the left. The building outlined in lights behind it is a food plaza that also includes stuff like the carriers with which they used to showcase rabbits and raccoons and stuff, back in the 30s and which they still have because Kennywood doesn't throw stuff out. 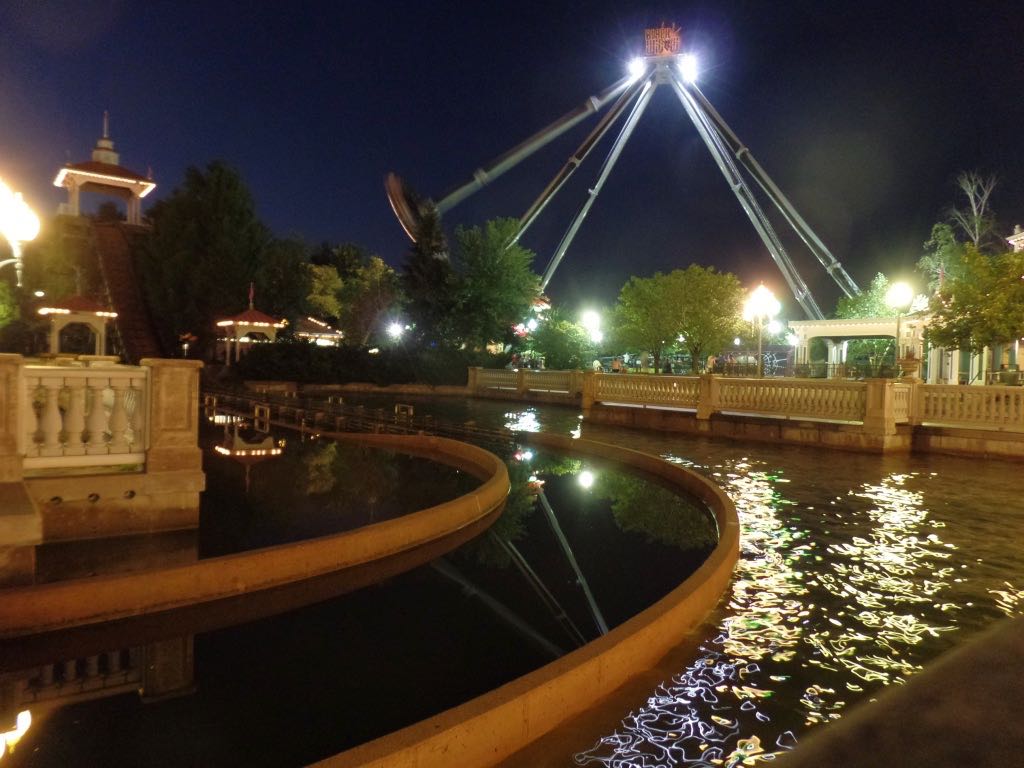 Another view of the reflecting pool in Lost Kennywood. The Black Widow's nice and clear in this light. The water trough here is for the Super Flume that imitates the Shoot-the-Chutes ride of the old-time amusement park which is the theme of this section of Kennywood.