It was a year ago this week that we lost Columbo, suddenly and unexpectedly to what we figure must have been an infection in his brain. It was two years ago this coming week that we lost Stephen, finally and expectedly to old age and arthritis and his finally being all worn out. And it was sometime this month that we finally have been without Penelope longer than we were with her.

So I've been feeling wary, a little paranoid, about Sunshine's health. There's not any real reason for this, and I know I'm not being rational about it. But after the past three years it's hard not to look for the thing we don't see coming. Like, she's always been a floppy bunny; that she was willing to throw herself on her side twice --- a sign of confidence in the security of her location --- when we first met at the humane society was one of the things that convinced us of her. But then she flops over so hard or so fast and I worry, do I know she isn't having coordination issues? It's not just me: the other night

bunny_hugger noticed how dead still Sunshine was in her flop and nudged the rabbit into activity. Or, like, she sprawls out in her litter bin and rolls her head upward. Adorable, isn't it? And then I think, well, wasn't Columbo rolling his head upward in what we now think was a symptom of his infection?

Probably not. Sunshine seems to be just fine. Active, energetic, engaged, like I was saying the other day. She's almost acting even younger, but that probably does reflect our having had more time with her. She has got to where she'll beeline for underneath the sofa and tear up the lining given any chance, but it's a very old sofa and the lining was doomed from many rabbits before her. She's decided she does not like where her litter bin has been, and moved it to where she does want it, a place that gives her a better track to run orbits around. Which she does when something exciting is going on, like it's near dinnertime or she sees

bunny_hugger is near or anything.

As for her actual medical issue there is how the cataract in her right eye, the good eye, seems to be getting larger. That'll need investigation next checkup, surely. If she starts to need eyedrops in both eyes that'll take some retraining. She's gotten very good about waiting for one eyedrop, but then demands her mini-wheat treat. Two and she might get bitey.

She has finally demonstrated a specific interest in the Christmas tree. Particularly, she likes to hop over to it and start eating the tree. Yelled at to not eat the tree, she hops around to the far side where it's harder to pull her out. So she's picked up a few tricks, certainly.

Trivia: At the start of the Battle of the Bulge the Allied had four divisions defending the Ardennes, the 4th, 28th, and 106th divisions supported by the 9th Armored Division, spread across ninety miles. The 106th had never seen battle. Source: The Second World War, John Keegan.

PPS: So, with Kennywood visited and our Pinburgh trip visited, what's there to do but go somewhere with a lot of novelties and attractions and play pinball? Thus the visit, later in the week, that we made to Marvin's Marvellous Mechanical Museum. Here's some pictures. 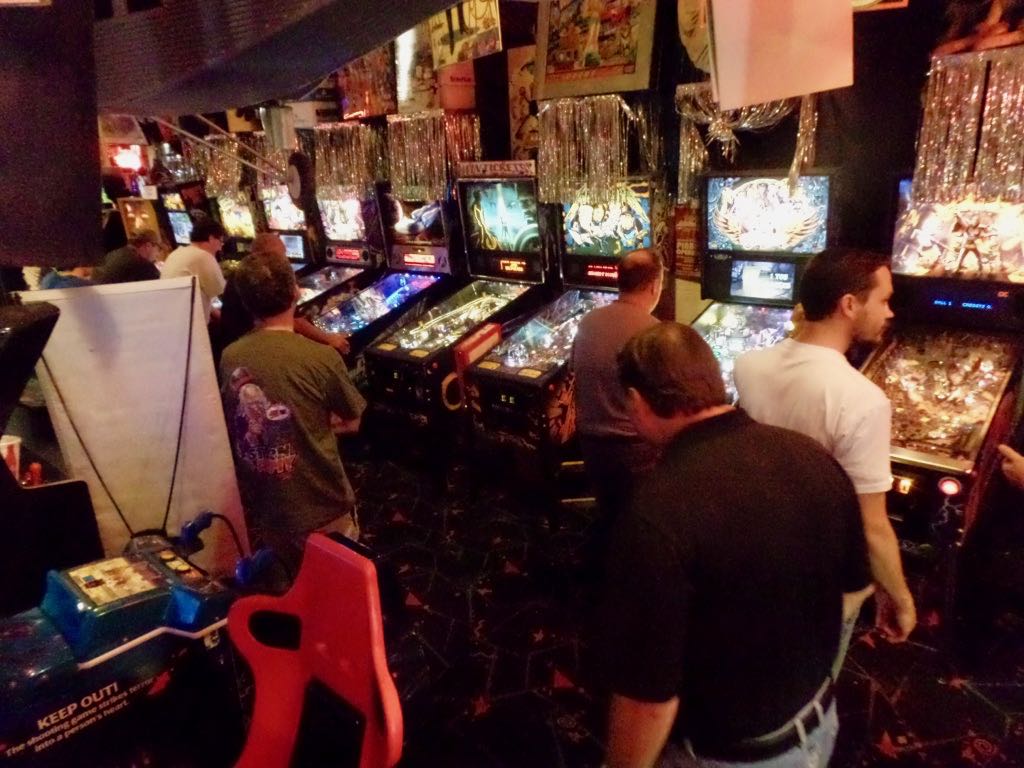 Quick view of pinball league at Marvin's Marvellous Mechanical Museum trying to get organized. The place has rearranged things a bit and some of the games, like Tron, Metallica, and Aerosmith have gone, but it's still roughly like this. 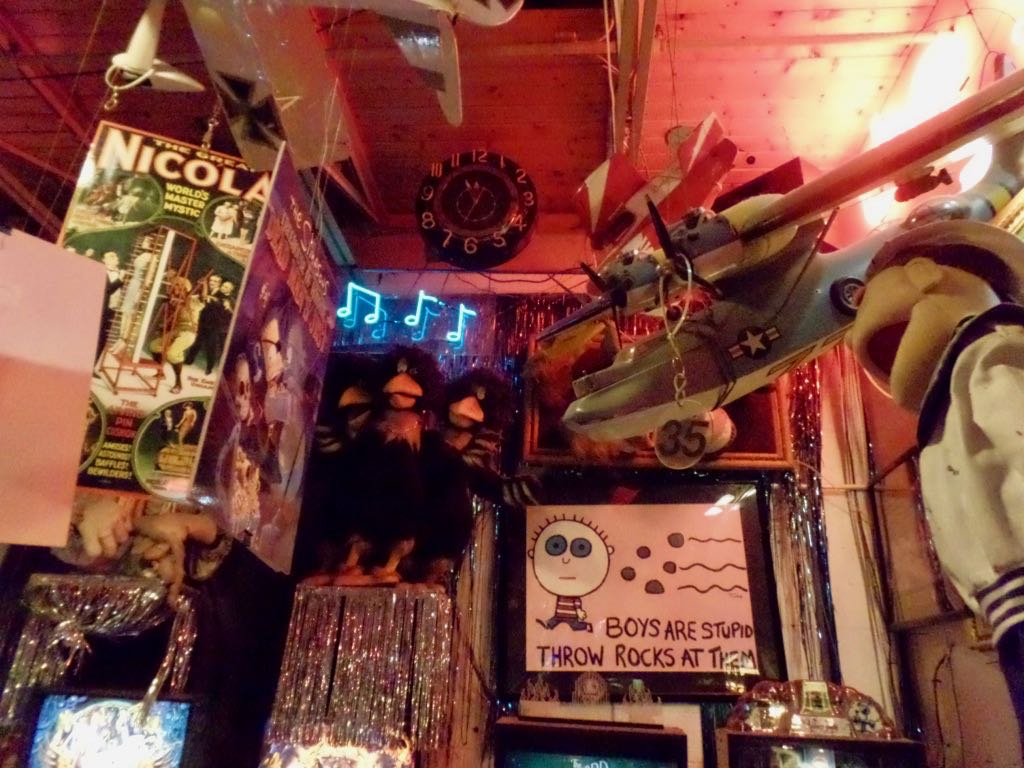 There's just stuff everywhere. Here, above the pinball games, are a couple of the singing bird animatronics from a former Chuck E Cheese's. Also one of many circus/magician poster reprints that the place has. 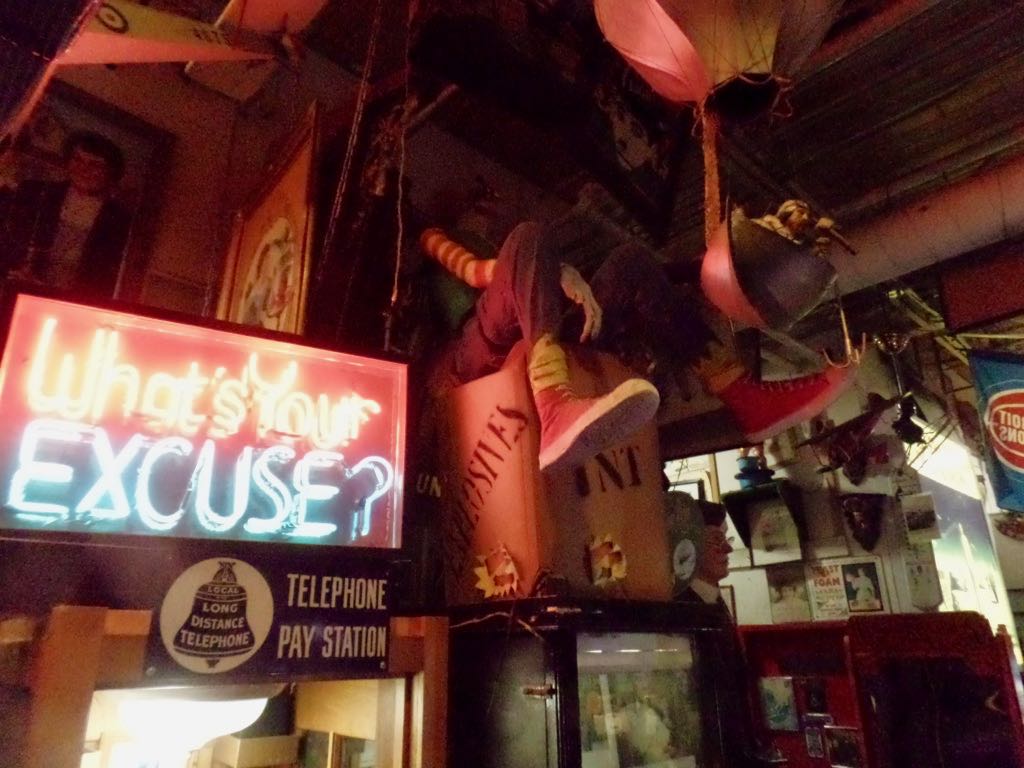 Big strange figure squatting on a box labelled TNT. The ``What's Your Excuse? Telephone Pay Station'' looks to be an old novelty lightly updated. The gimmick of the mock phone booth is that you go inside and it provides audio to support the claim that you're stuck in traffic or caught outside a fire or in the hospital or something, so that you can call someone and fool them into thinking you're stuck somewhere unpleasant and that's why you won't be seeing them anytime soon.