Revealing that the Hall is the place that aims to please

Had a lot of mathematics comics two weeks ago, so it was a busy period for my mathematics blog this past week. This coming week is going to be soooo dead. Well, here goes.

As for the story strips, here's some stuff. What's Going On In The Phantom (weekdays)? What's the shortest Phantom story ever? September - December 2018 in review. Parts of three different storylines here!

Now getting back to Marvin's Marvellous Mechanical Museum, as it was configured August of 2017. 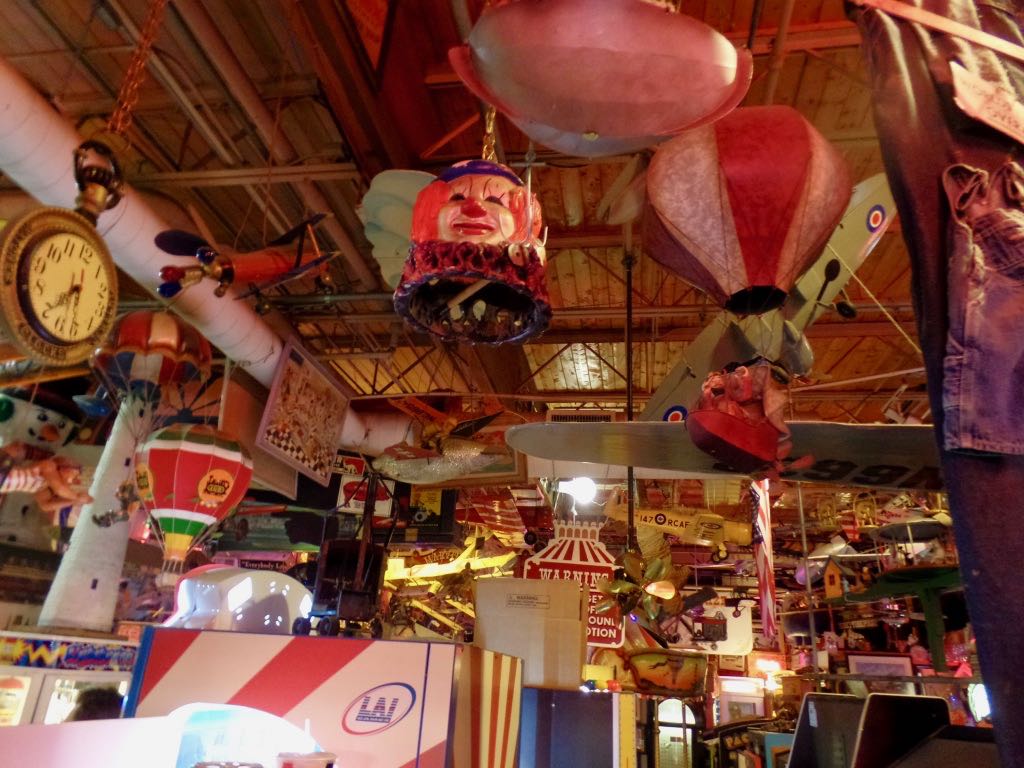 Staring back at the ceiling of Marvin's. Yes, there's a model lighthouse off to the left and also yes, that's some kind of clown head dead center there. Also off on the right are what they bill as the World's Largest Overalls. 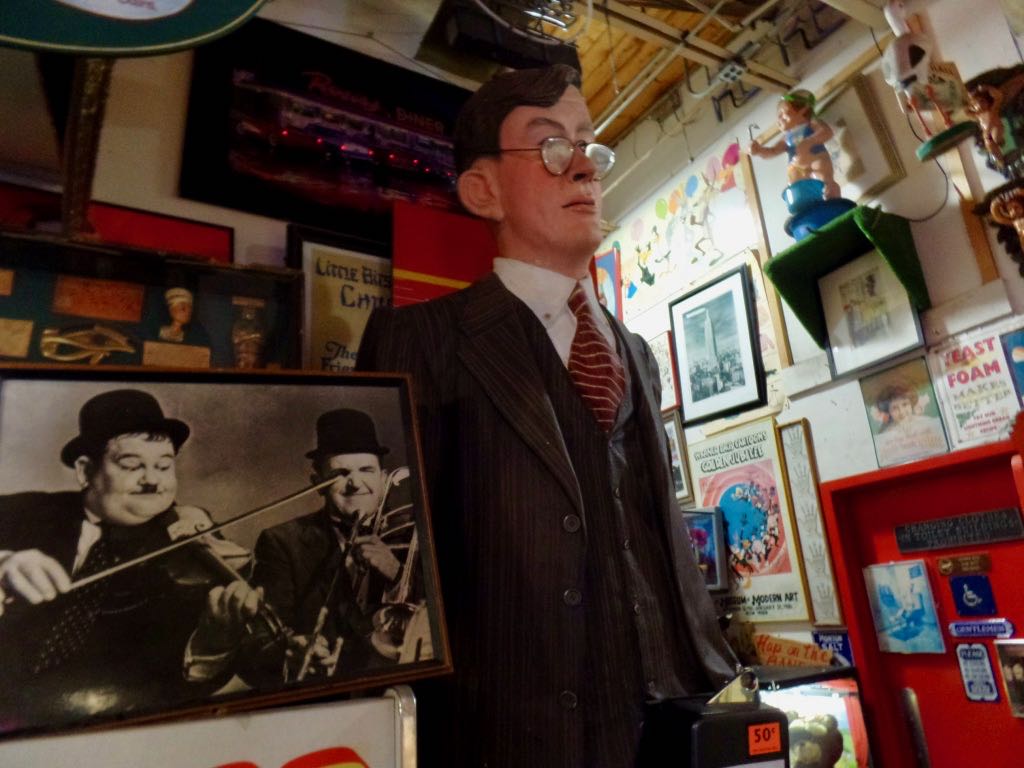 And here their mannequin of the Reverend Sir Doctor Stephen T Colbert, DFA. 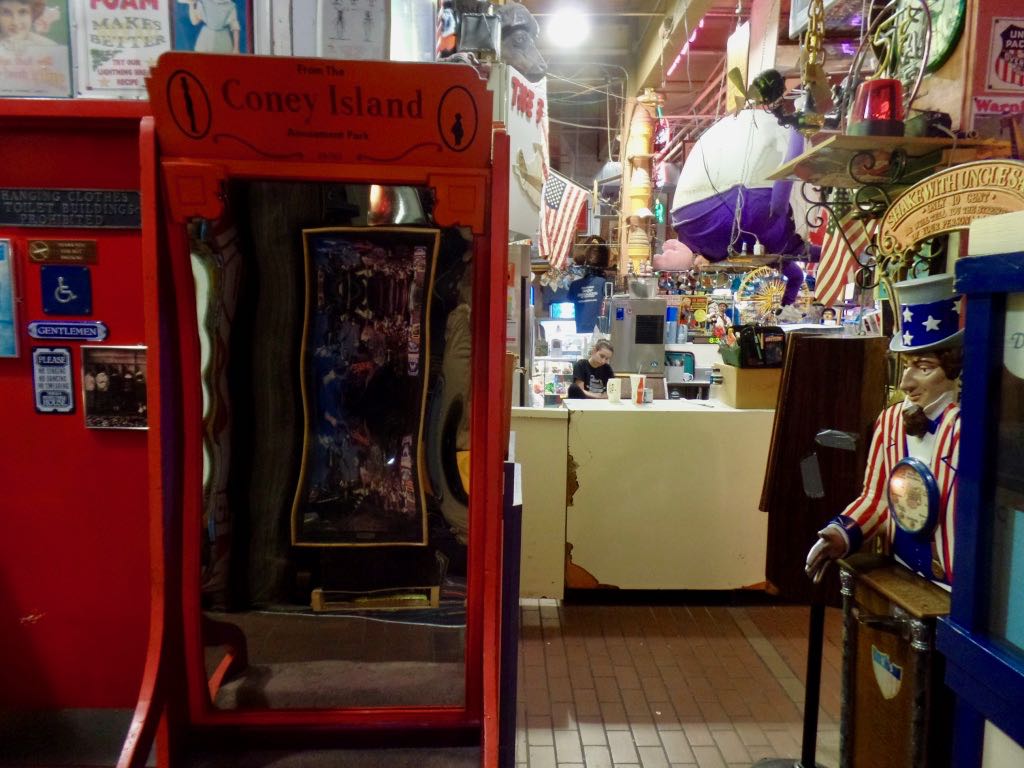 Funhouse mirror that purports to be from Coney Island. Whether that means the Coney Island in New York City or Coney Island, Cincinnati, seems ambiguous to me. ``The Coney Island Amusement Park'' would, taken literally, have to be Cincinnati's since there is nowhere else called ``Coney Island amusement park''. Coney Island's are a bunch of parks and independent concessions and all that. But that's a pretty fine point to worry about in a place like this. 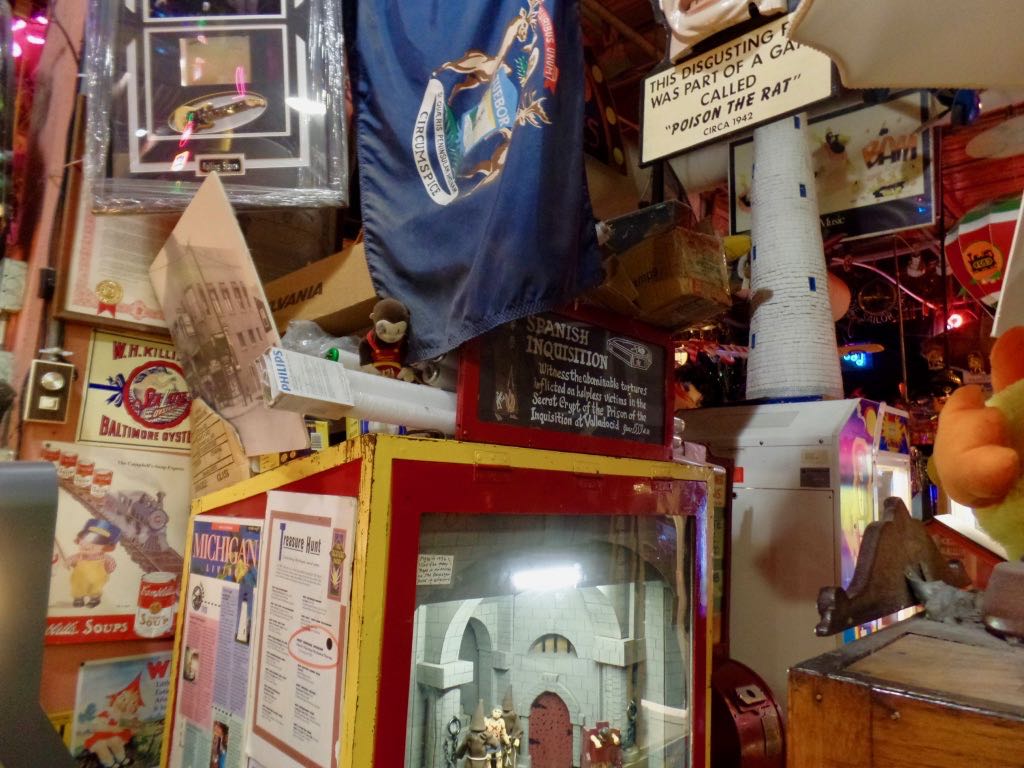 Another heap of stuff, with a coin-operated attraction --- the Spanish Inquisition --- at the bottom there. The ``Disgusting face [that] was part of a game called Poison The Rat, circa 1942'' in the upper right corner there is one of Hitler. I'm guessing the objective was to throw something into his mouth. 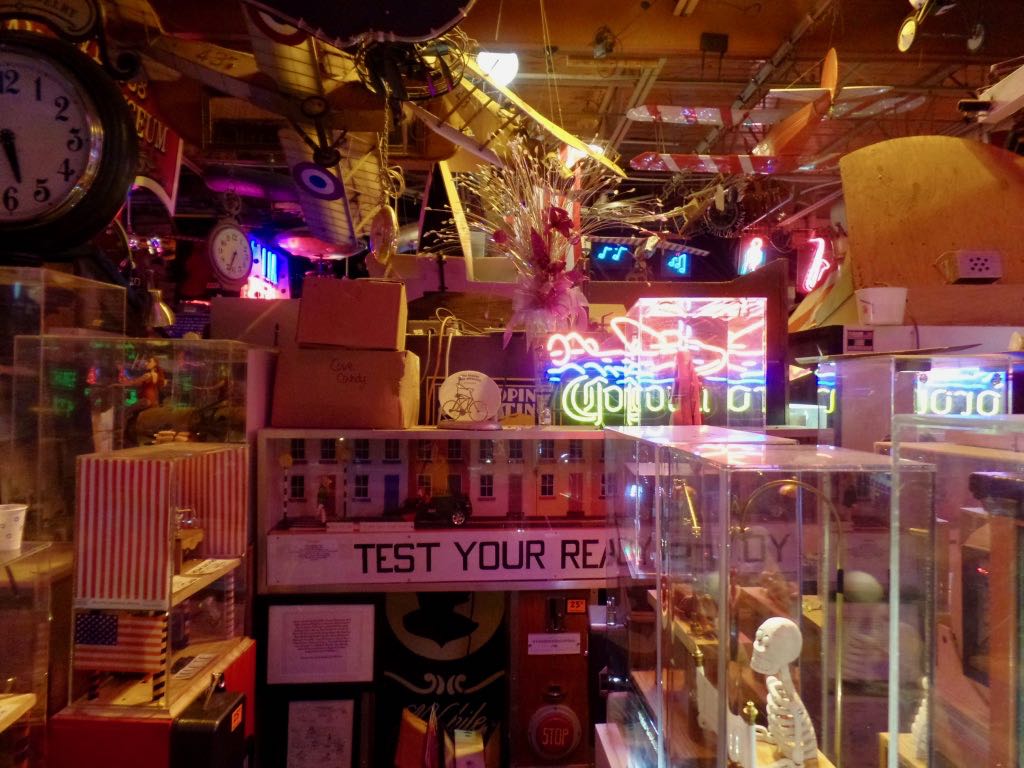 Little alcove of coin-operated shows and gadgets over by where they serve pizza. This has been rearranged away, but it gives an idea of how much sensory overload the place can be. 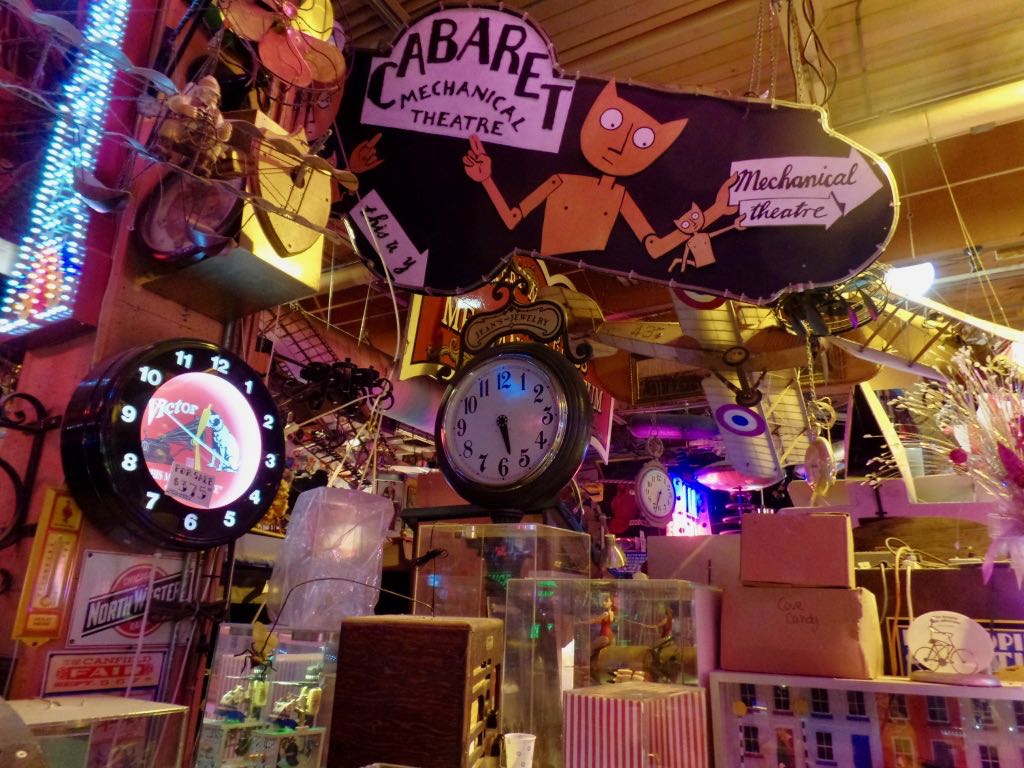 And here's what you get looking up just a bit from where that last photograph was. There are a lot of clocks around Marvin's and I'm not sure any of them are set to the right time, or even to agree roughly at the time. 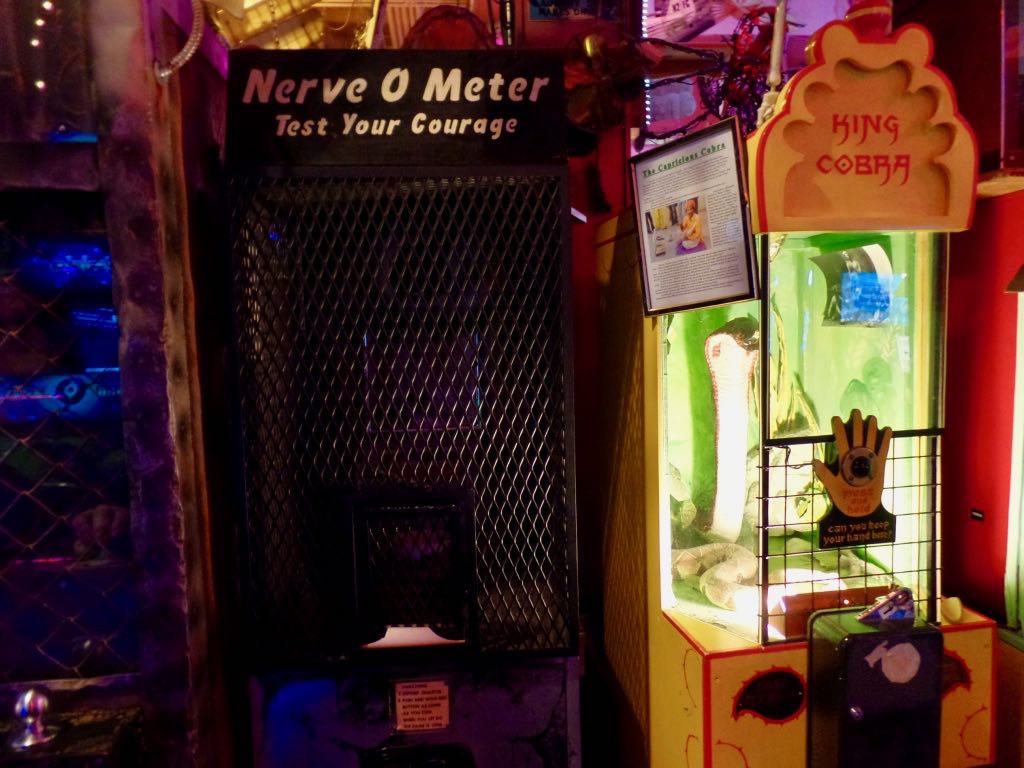 Couple of reflex-testing machines. I always check the King Cobra when I visit; it's working about two-thirds of the time. 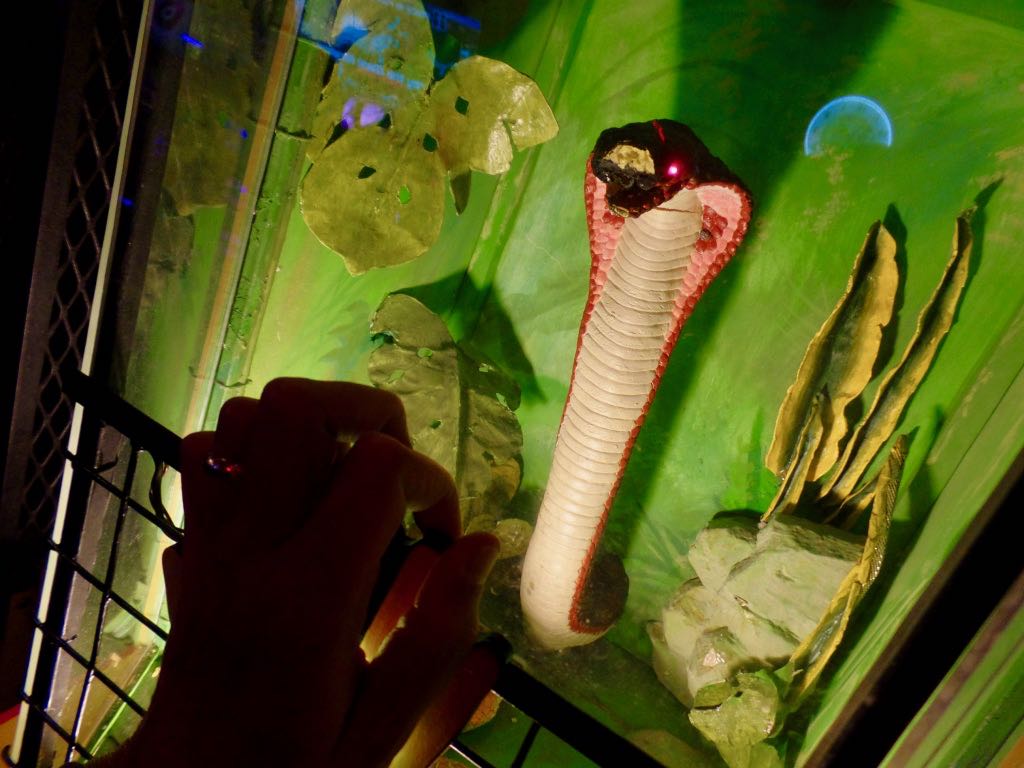 And here I put myself up against the somewhat gruesome mechanism. The Cobra's supposed to swing back and forth a while and then strike at you, with a hiss of air and cold water spraying up. Did I flinch? 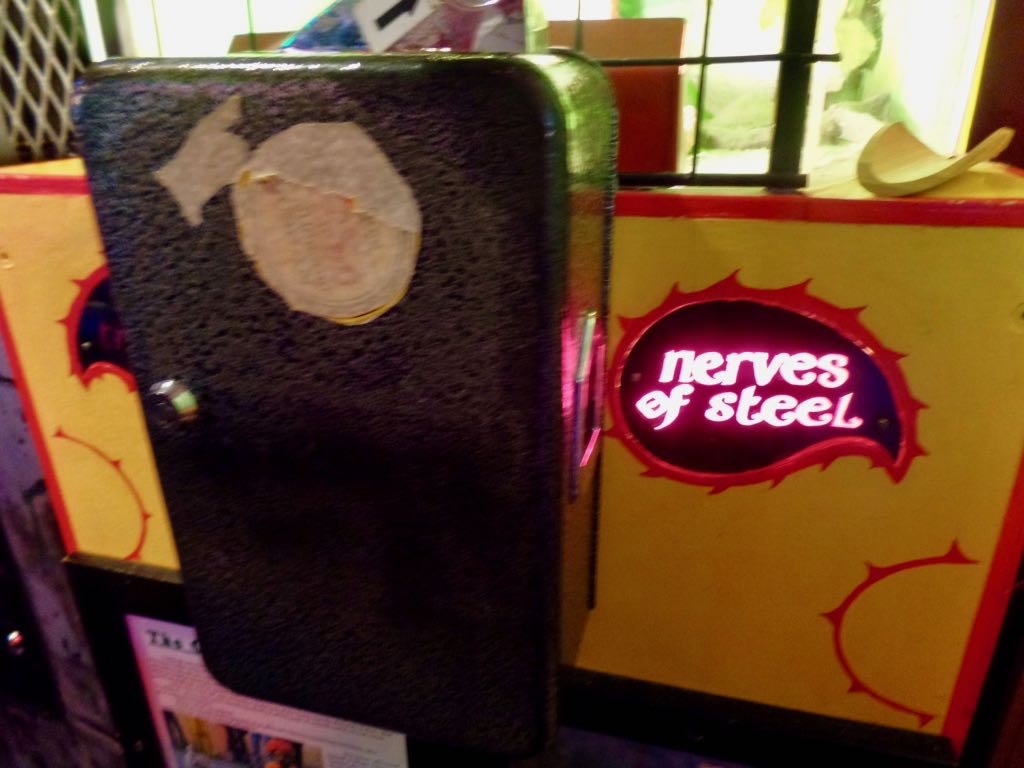 I did not. I credit

Currently Reading: Plotting The Globe: Stories of Meridians, Parallels, and the International Date Line, Avraham Ariel, Nora Ariel Berger. This book is surprisingly, and really gratuitously, insulting to the French. I mean, like, there's a bit where it repeats the canard that metric measurements aren't scaled to human experience, which doesn't even make superficial sense. Then there's mocking the 19th century French advocacy of using El Hierro in the Canary Islands as prime meridian. The idea wasn't going to go anywhere, since most navigational charts were using Greenwich, but it's hardly a dumb idea. It had a lot of historic use, and it would put Europe and Africa all in the same hemisphere. It would suggest a date line between Australia and New Zealand, but so what? Anyway, add to that snarking on France at the International Meridian Conference for proposing replacing the 360-degree circle with the more metric 400-grad circle (100 grad to a right angle, see)? That's just ... I mean, Ariel and Berger are aware that people have changed units in the past, right?