Once I had the rarest rose that ever deigned to bloom

Mere hours after getting home from the Marvin's Beatles launch party (which was also a regular league night, first of its new season) we set off for another pinball tournament. I had thought the new International Flipper Pinball Association rule, that only one's top twenty scores of the year, might slow down the end-of-year rush for points. After all, each new event knocks off an old event, so even finishing well means you're not gaining as much as you might. Consequence I hadn't considered: there's no reason not to do an end-of-year rush. If you do lousy, it can't hurt you. If you do well, you might boost your standings yet. Or it might be from a simultaneous but unrelated rule change: that Michigan's a busy enough pinball state there are 24 people going to the state championship match. The top eight get a first-round bye. That's worth having, if you can snag a solid finish in a high-value tournament.

So Saturday, AJR --- himself a past state champion and always a likely candidate for next year's state champion --- ran the first (I think) tournament at his house. He's got a basement and garage with pinball machines. He also routes games in the Flint area. So he's got an interesting and neat selection of games, including solid-state and electromechanical tables. It's a great spread of games, really. You could do a very plausible state championship in his house. This tournament almost was one. 45 people attended, including --- to our surprise --- just about everyone who might be in the state championship this year. The only major players absent were CST (who's just retired as the person running the IFPA's Michigan branch), AJG (who's sitting atop the state rankings already right now, and has that whole declaration he's retiring from competitive pinball to live down), and MWS (spending a week at Walt Disney World). But actually present were a surprising number of west-side players, including RLM (who runs the Grand Rapids league), KEC (she's not likely to make it to state championship this year, as she plays diligently but on average not well enough, but hey, one killer finish in a high-value tournament and that could change), PH (the new IFPA Michigan Branch head) and his son AJH. They're the ones from Fremont, on the far west side of the lower peninsula, so they had to have spent roughly eighteen hours driving out and back. If it seems to you that Michigan has maybe a lot of players with the pinball initials AJ*, let me reassure you: AJG's wife also plays competitively, sometimes, and uses the same AJG initials. Luckily for me she doesn't further enter this saga. Oh, AJR's son also plays competitively, and is also sure to make state championships and will likely make a good run at winning the state. He's started Michigan State University so he should join the Lansing Pinball League, except he's being very fussy about the question of how to get to league nights and all the times we tell him there is a bus that runs from campus to right outside the bar haven't penetrated yet. He has the same name as his father but I don't know if he has the same pinball initials.

The format was Progressive Strikes, where you play in groups of four. In that match, the first-place finisher gets zero strikes, second-place one strike, third-place two strikes, and fourth-place three strikes. You go on playing until you get, in this case, 15 strikes total. We'd never played one before, but were keenly interested in how it would go. Not so much how hard it would be to organize, but in how long it would run.

bunny_hugger hopes to run her own Silver Balls In The City later this month as a 10-strike Progressive Strikes tournament, but fears the thing running forever. So I was paying attention to how long it took for about twenty players --- the number we expect at Silver Balls --- to get ten strikes. It's an imperfect measure, but, it took about four hours which would be just about the right tournament length for our needs.

AJR's got a fun house. Also a FunHouse, but that was on location and so we couldn't play it. It's in the outskirts of Flint, on literally the intersection of two dirt roads. Or muddy roads, since it was just rainy-snowy enough and just enough above freezing that the end of the path was a lot of muck. And their house has a big lawn, yes, featuring a bunch of amusement park-style animal sculptures. You can see why

bunny_hugger gets along so well with AJR's wife. She also keeps chickens, and they have a chicken coop right where you can see it from the kitchen table. During some down time

bunny_hugger was working --- it's finals season and she has to grade, even during fun events --- and I assumed she had picked her seat so she could glance up at the chickens prowling around and disapproving of the cats that wander by. Well, she hadn't but now this changed things.

Also AJR's wife went way overboard making food. We knew there would be, but expected some snacks, a sandwich tray, that sort of thing. Maybe a slow cooker full of something easy to make in bulk. No; she had several rounds of serious food, including manicotti and baked rigatoni that reminded us that we should bake rigatoni more. Also a sheet cake so vast that even the 45 people present weren't able to eat more than two-thirds of it. We brought home a couple slices and they've still got way too much. And she also got some fireworks to set off at the dinner break about halfway through the event. She set these off at the intersection of the two dirt roads, where things had to stop just the once for a car driving past and unaware of what all this was about. Also this inspired the question: is this a holiday weekend? Or is this just illegal fireworks? (They're legal to set off close enough to state-recognized holidays.) Well, it wasn't a holiday weekend; she just figured, who's going to call them on five minutes of a couple fireworks a bit too early for it to be Christmas or New Year's? She got away with it, so far as we know.

Trivia: The Cavalier Parliament with which Charles II took the crown at his 1661 coronation was not dissolved for eighteen years. He had allegedly declared that he would ``keep them till they grow beards''. Source: A Gambling Man: Charles II's Restoration Game, Jenny Uglow.

Currently Reading: Plotting The Globe: Stories of Meridians, Parallels, and the International Date Line, Avraham Ariel, Nora Ariel Berger. Really getting caught up by the chapters where the author writes ``I'' and about ``my'' experience when, you know, right there. Both authors get credited on the spine too so ... I mean, I can infer which one was probably on ships in the Royal Navy in the 50s but isn't this what line editing is for?

PS: My 2018 Mathematics A To Z: Yamada Polynomial, about a neat corner of knot and graph theory that I can't find explained anywhere online.

PPS: Hey, how about a pinball event? In this case, from August 2017, the Meijer State Games, held in Grand Rapids. 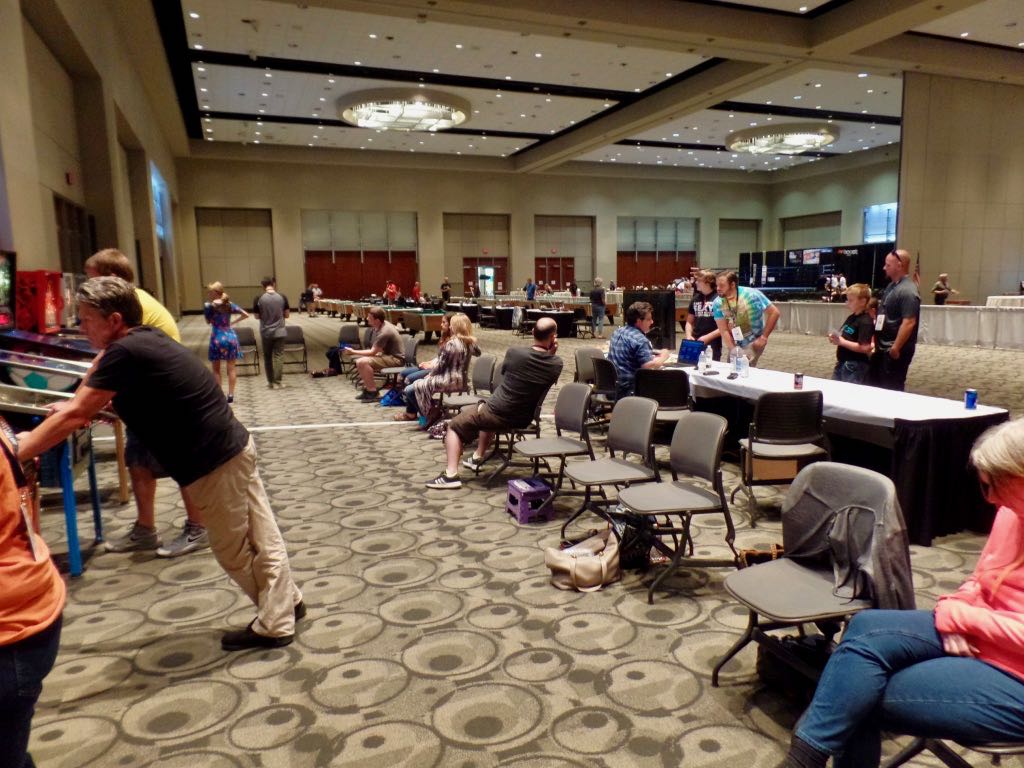 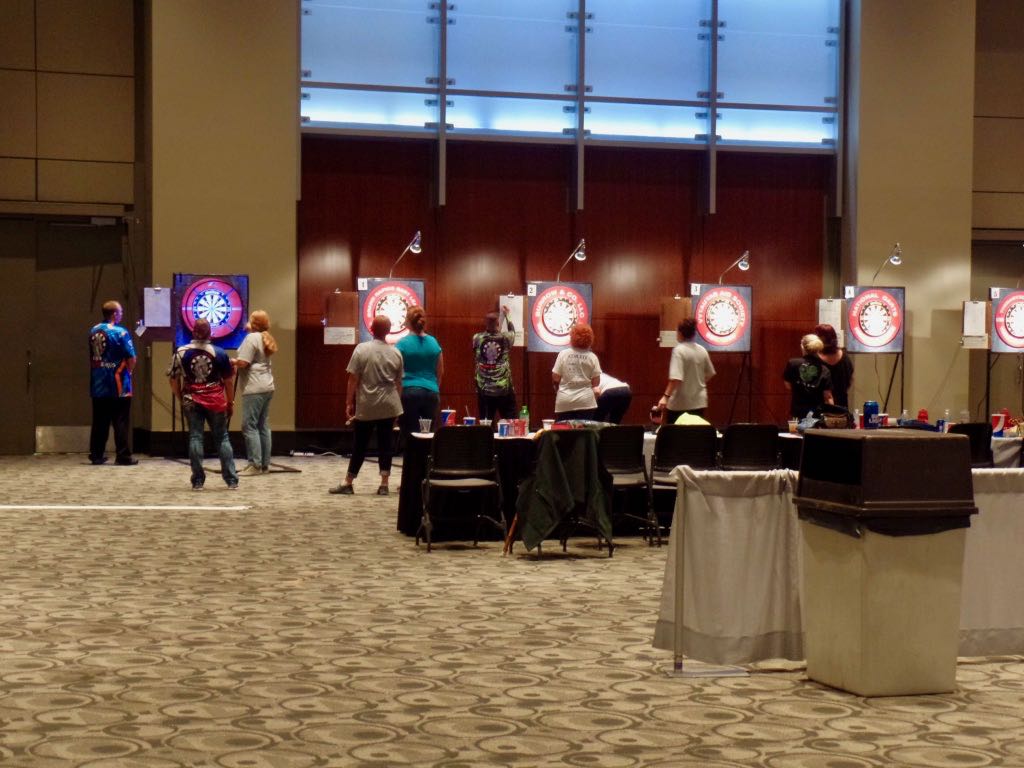 And the other major event going on in the same ballroom was darts. So, yeah, they had all the disreputable bar sports in the same place. 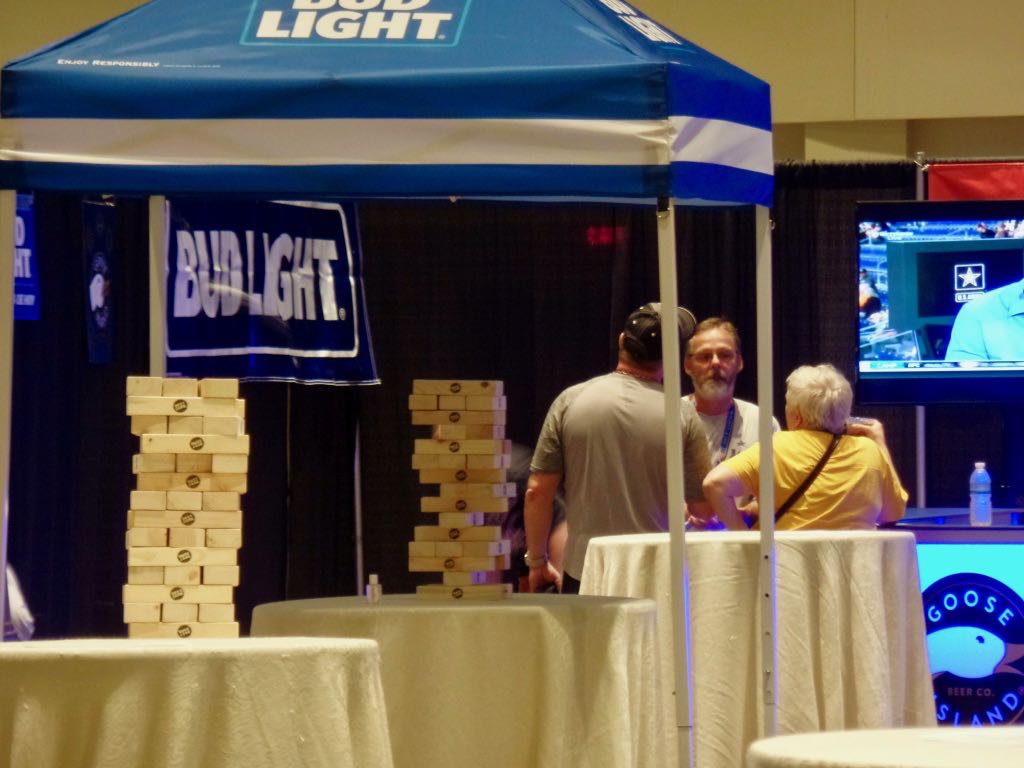 So yeah, all we needed was the bar set up! Also with giant Jenga blocks for a reason.