Till I Belong To You

So the hipster bar where Lansing Pinball League meets got a Beatles pinball table two weeks ago. It broke right away, before we could even play it. RED, who maintains the games there, fixed it quickly, but then we were busy with many things, including that Friday-to-Monday stretch where we went to three pinball events in four days. This Tuesday though we were back and ready to play the game for the first time. A little embarrassing, but that's when we were able to get there.

Also it's when the Lansing Beatles Launch Party was.

bunny_hugger was running it. It wasn't actually a Lansing Pinball League event, but she's always the most organized responsible person nearby so she's who Pinball Pete's, who owns and maintains and buys and swaps out games, asked to organize events like this. They sent her a Grand Champion plaque, as well as translites --- the backglass art --- for The Beatles and the Batman '66 and Deadpool games to give away as prizes. All she had to do was run a tournament.

Usually launch parties like this are run alongside other events. We didn't any that would work for, though. To draw any interest she made a Battle Of The Bands event. People would play up to two games on each of five different tables --- The Beatles, Elvis, Iron Maiden, AC/DC, and Metallica --- and their three highest-ranking scores would count to whether they made it to playoffs and what their seed in playoffs would be.

Also significant for this tournament:

bunny_hugger would try out the NeverDrains Tournament Manager, a home-brewed scorekeeping system used for this style (called ``Herb scoring'') of tournament qualifying. We've seen it used at Pinball At The Zoo and at the Baby Food Festival. We hadn't done that before. Also also significant: Pinball Pete's agreed to pay the $25 software charge, plus the IFPA event excise fee.

bunny_hugger managed to get them to put up this expense by the delicate negotiating technique of asking. Sometimes things turn out easy.

Not so easy: all the playing. ... Well, the complicated part was actually getting my two games on each table in, while still keeping scores of other people, most of whom had not been at this sort of tournament before. And it wasn't really many people at the tournament --- just thirteen all together, including two who signed up in the last minutes --- so if we're going to use this system in future tournaments we're going to need slightly better operations. The big thing will probably be that the official scorekeepers put their entries in first, before the general public does. If we only get a limited number of tries then we're not taking advantage and it is a lot less confusing if we aren't running around to the other to get our scores logged.

bunny_hugger had, among all the play, a great Beatles game, putting up (I think it was) the Grand Champion score. And a very good Iron Maiden and decent Elvis. Then I went and spoiled things by putting up an even higher Beatles score, prompting her to kick me in the shin. Not hard. Worse, I made an entry error that gave one person's Iron Maiden score to another. I knew the problem, but until it was corrected she was listed as knocked out of playoffs, a disheartening place to be. When that was corrected she was back in, but what really helped --- since she'd already played her two games on each table --- was those last two people joining the tournament.

bunny_hugger and I among them. These were done as two rounds, each three-game PAPA-style. That is, playing three tables, with the first-place finisher each group getting four points, second-place two points, third-place one point, and fourth place zero points. The two top number of points-getters for the three games in a round go on to the next. It's a way to increase the number of meaningful games, and thus the meager International Flipper Pinball Association value of the tournament.

bunny_hugger and I were in the four-person group; yes, the three-person group has an advantage in this advancement scheme, but you have to do something. And, even though two games out of our three ended up being The Beatles (the other was Iron Maiden, because of that worldwide Stern ``Up The Irons'' tournament described the other day), and though

bunny_hugger and I put up the two highest scores all day on the game, we flopped out.

And who did not flop out? MWS, of course. DMC. RED. And JB, a newcomer to our tournaments. When the final round was done, the winner was ... a tie between MWS and JB. On to a random number generator to pick a game. For the Iron Maiden launch party there were a crazy number of ties and they all ended up on Elvis. This time around the Beatles launch party tiebreaker ended up on ... Metallica. All right, then. To that game, where MWS put up an impressive good score and JB ... couldn't get things together. Sad, but, any time you can finish second place and get a plaque on your first sanctioned pinball competition you're probably getting a good impression. And our friend MWS went home with the Beatles Grand Champion plaque and a translite, of the backglass art. Not bad.

(When I won the Marvin's launch party the translite was not among the champion's prizes. A shame, since we would like one, but, you know. We had our fair chances to win that one, and the one sent to us as well. And we actually have got several translites we should do something with; having one more, however attractive, isn't going to help us any.)

Now we could go home and think hard about Wednesday, when the Grand Rapids Pinball League would be having its quarterly tournament. ... We decided not to, figuring that five major tournaments in six days would be a bit much. Similar logic had kept us from going to the Belles and Chimes Women's Tournament on Sunday. We needed the time to do other stuff, but somehow, we didn't finish the stuff we took the time to do. I don't know how that keeps happening.

Trivia: A July 1864 bill increased Federal representation on the Union Pacific board of directors from two to five persons, and ruled that no significant management decision could be made without at least one Federal director present. Source: Empire Express: Building the First Transcontinental Railroad, David Haward Bain.

PS: And here's the playfield, as talked about above! 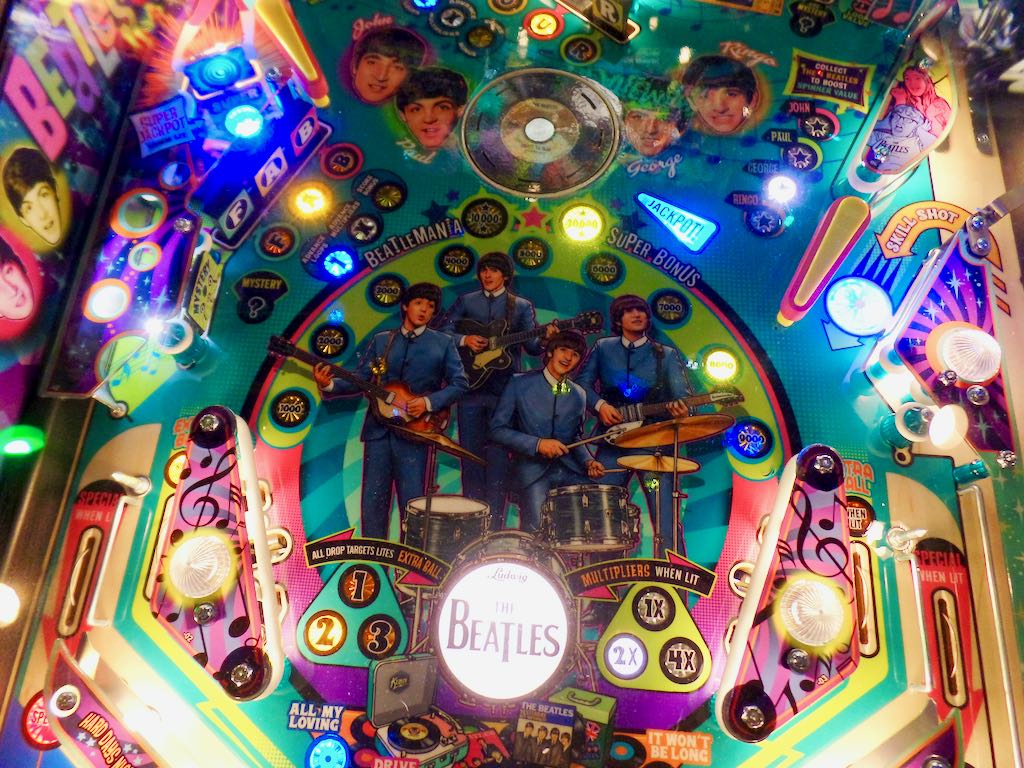 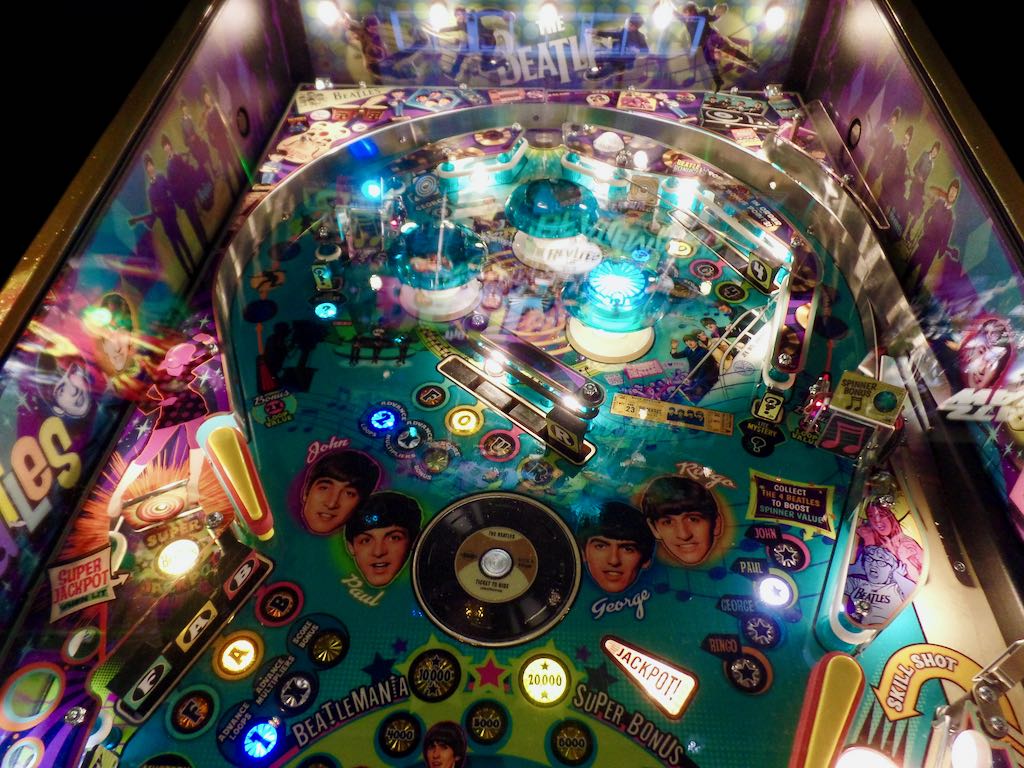 The upper playfield, showing off more of the style of the game. Also some of the Beatlemania art theme: notice there's replicas of the Shea Stadium tickets, art of screaming fans, the Beatles coming down the stairs at JFK airport, and miscellaneous merchandise along the upper skirt there. The drop targets spell out 'F-A-B', 'F-O-U-R', and '1-9-6-4'. 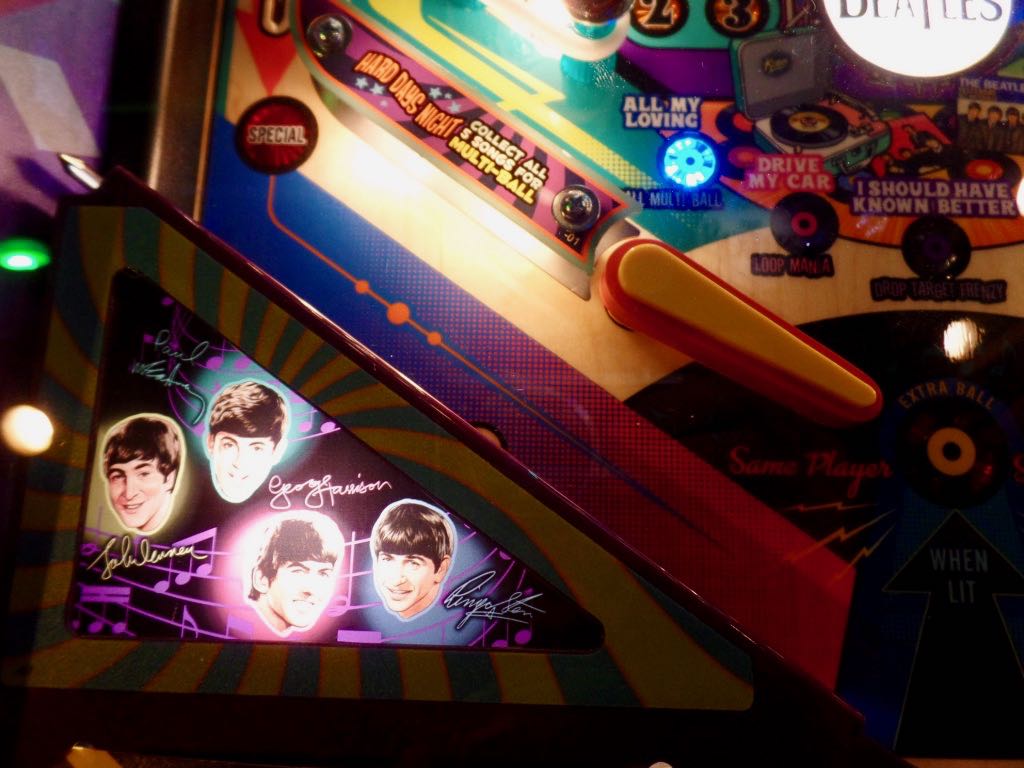 Lower left of the playfield, showing off a flipper and some of the details. Like, above and to the right of the flipper are the lights labelled 'All My Loving', 'Drive My Car', and 'I Should Have Known Better'. The lit one tells you what mode you're in, if you can't hear the music, and also cues what the most valuable shots are in that mode. Like, 'Drive My Car' is a 'Loop Mania' mode: shoot the left and right loops on the upper playfield and you at least will be happy.