Every night when everybody has fun

Despite the A To Z stuff it was a slow week on my mathematics blog. Not enough comics to write about. Here's what you missed:

And it was one of the less-dense story strips to review this week too. What's Going On In Prince Valiant? Did Prince Valiant get back home yet? September - December 2018 plot recap for you here.

And now, let me wrap up photographs of The Beatles Launch Party that

bunny_hugger ran, as I described it yesterday. 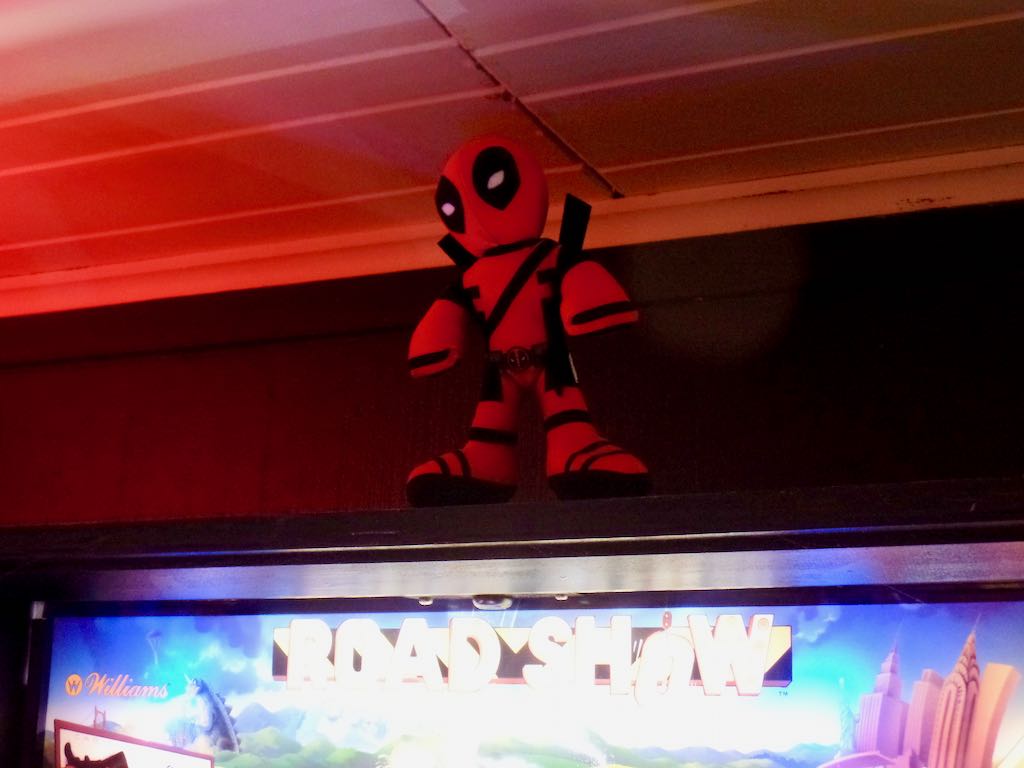 Yeah so next to The Beatles is the Deadpool pinball game. It's based on the comic. Anyway, the guy who's in charge of the games got a bunch of Deadpool dolls and has taken to hiding them above various games including, here, Road Show, which hasn't got the slightest thing to do with Deadpool in any form and isn't even on the same floor of the building as the Deadpool game. 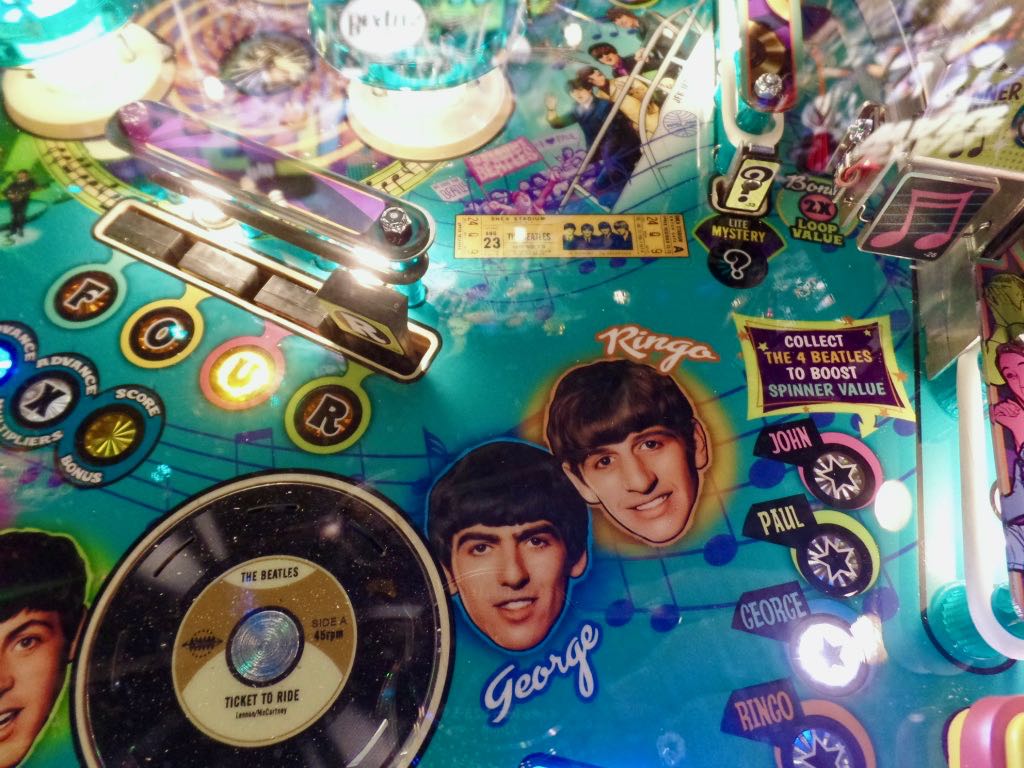 The region just above the upper right flipper on The Beatles. Better view of the imitation single, and the cute one, and the Shea Stadium ticket and all that fun stuff. Also showing off the major artistic theme of the game: ``if there's some dead space, put in floating Beatles heads and, I dunno, their signatures or something''. 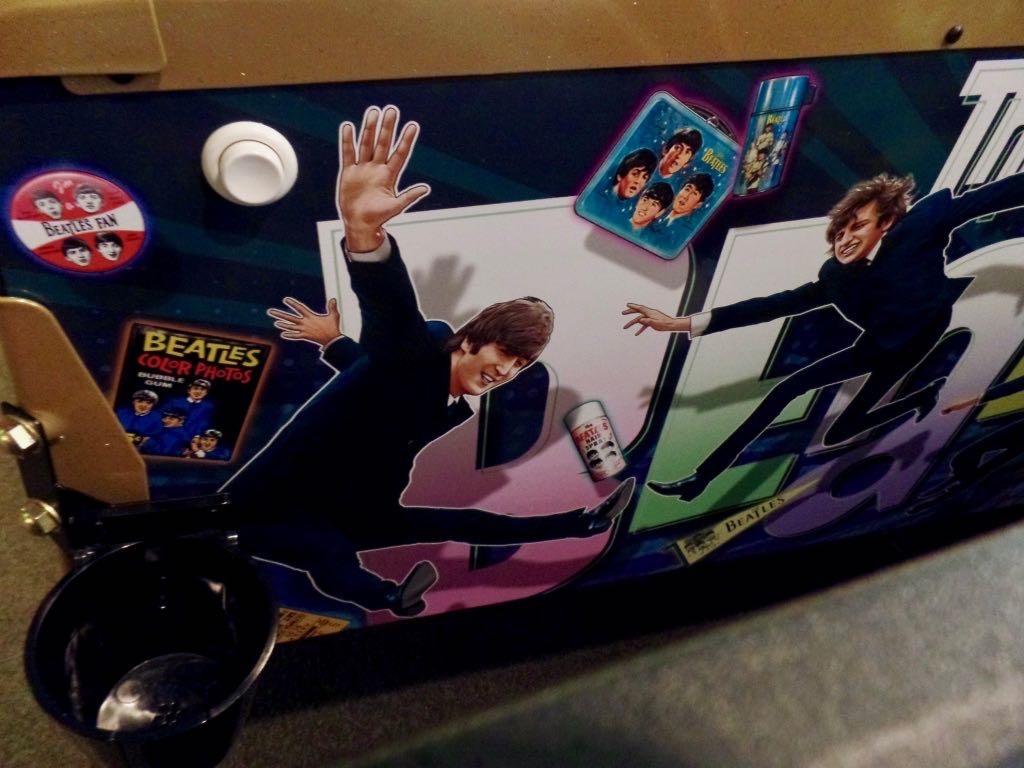 Side of The Beatles cabinet. It's at a bit of an angle because there's other pinball machines next to this table. Also hey, Beatles Hair Spray, remember that? 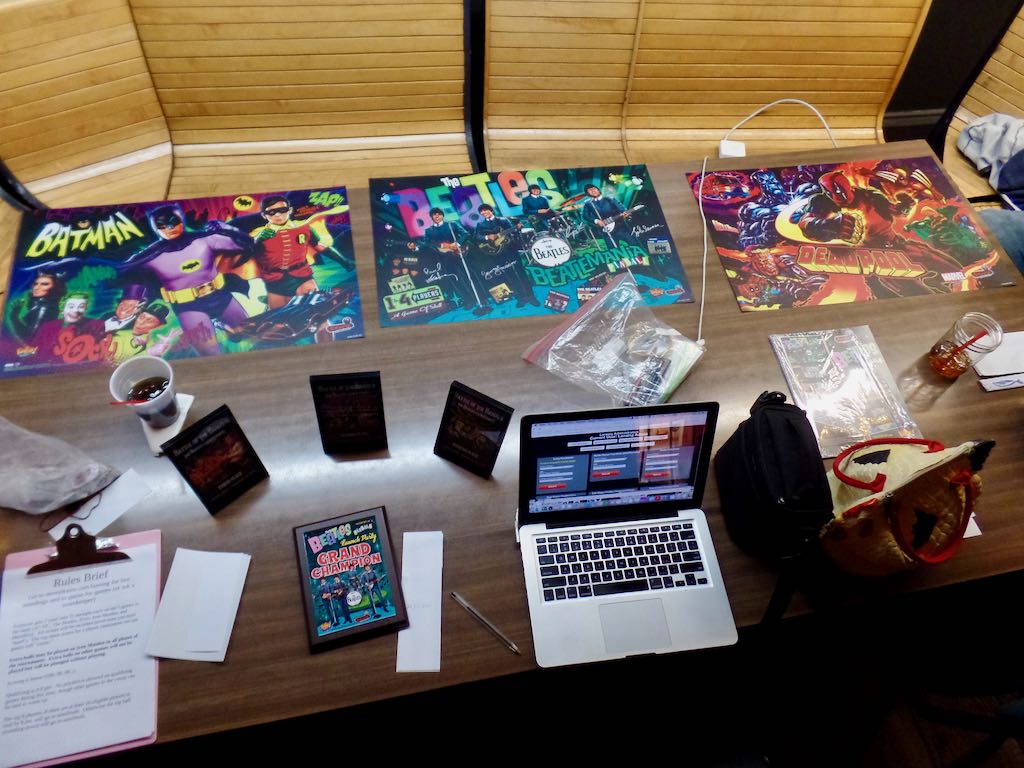 The beating heart of a pinball tournament.

bunny_hugger's computer, from which all the entries and scoring was kept. The three translites given away as prizes. The Grand Champion plaque which Stern sent and, surrounding it, three little photo-frame trophies 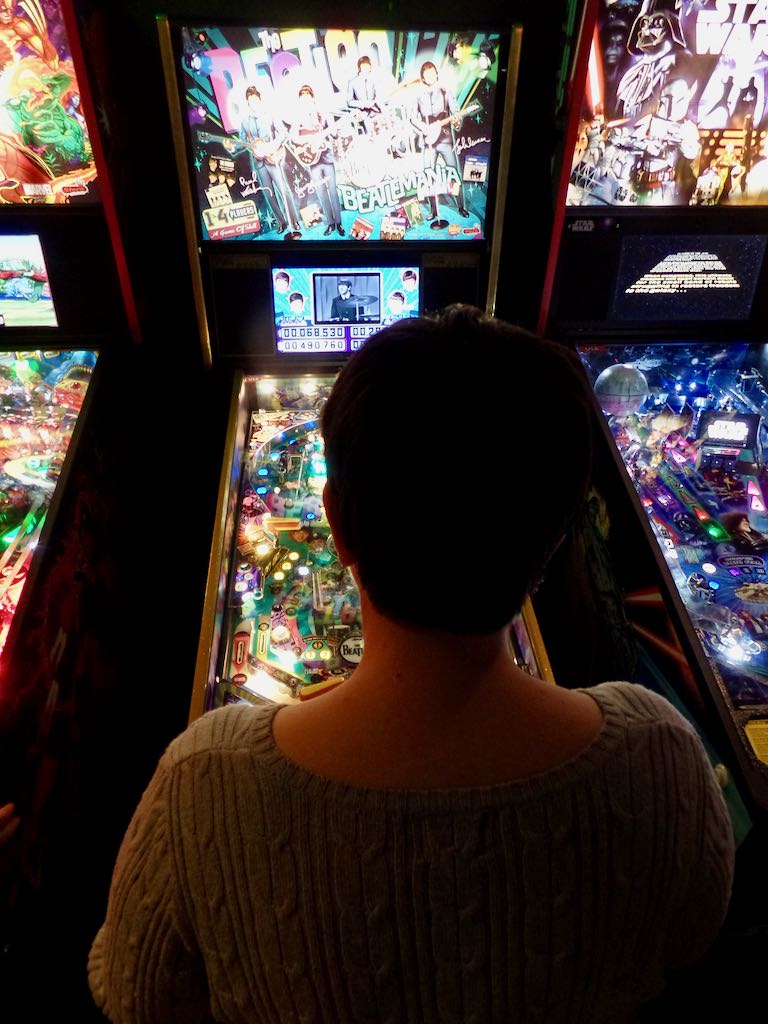 bunny_hugger hard at work putting up a score that's already at about a half-million; typical scores for the night were between one and two million points. 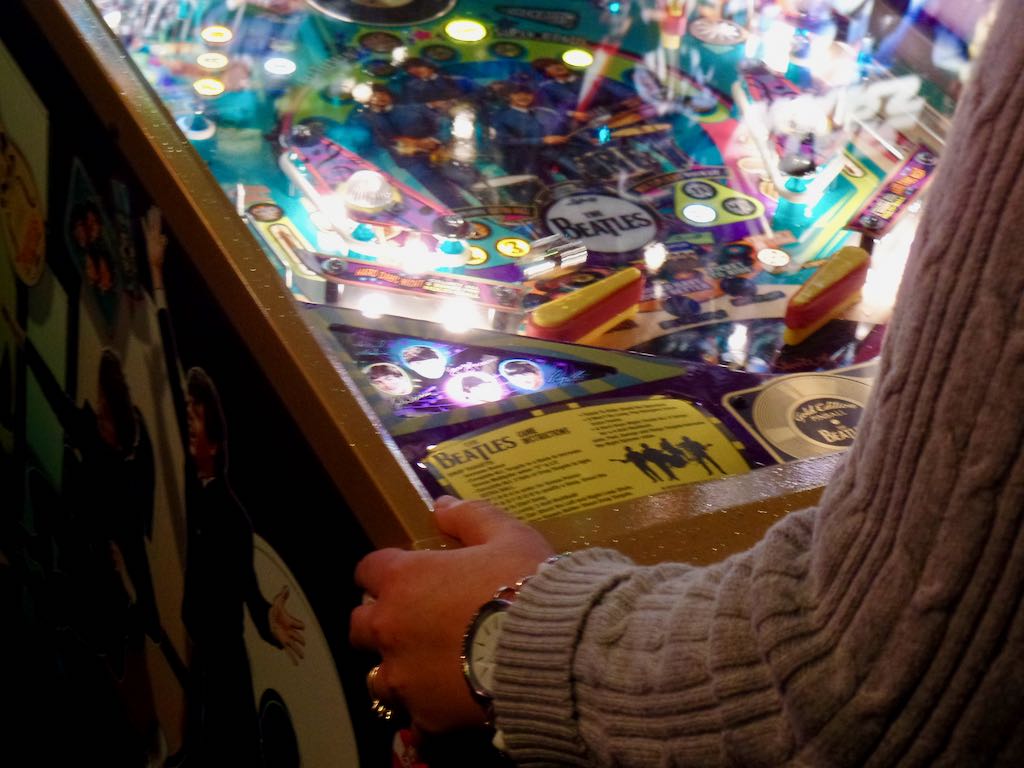 bunny_hugger getting down to sending a ball to the other flipper, if I'm reading the streaks above the upper left flipper correctly. 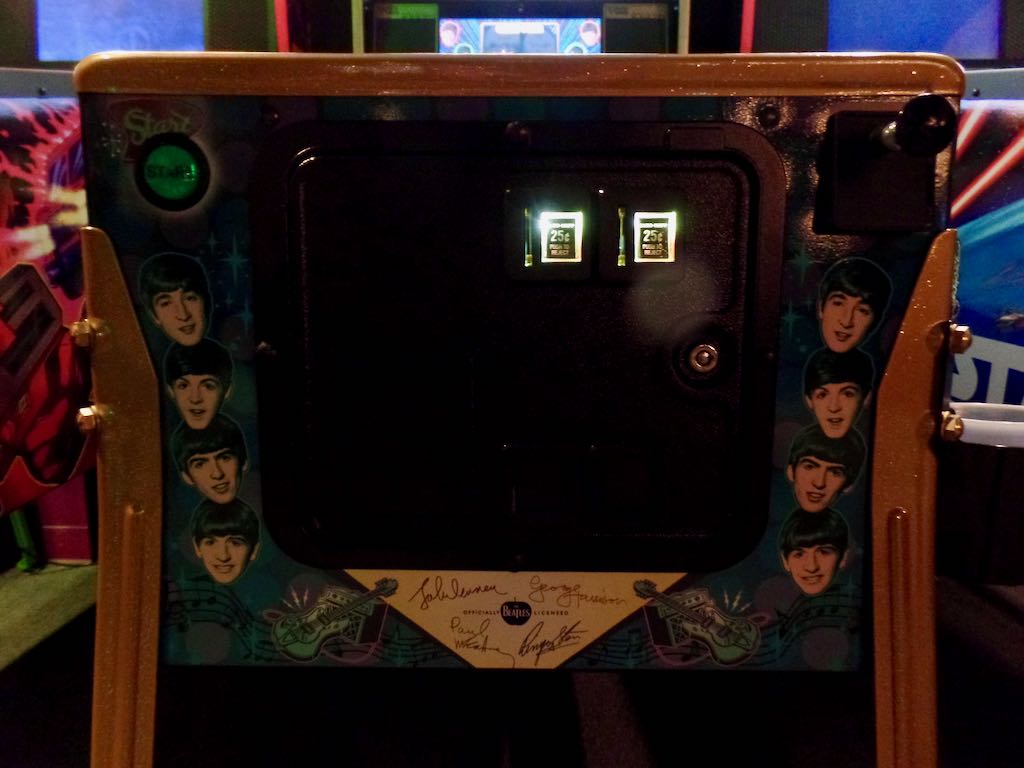 The front base of The Beatles pinball machine, with the perfectly average coin door and all that. And more floating Beatles heads and signatures. 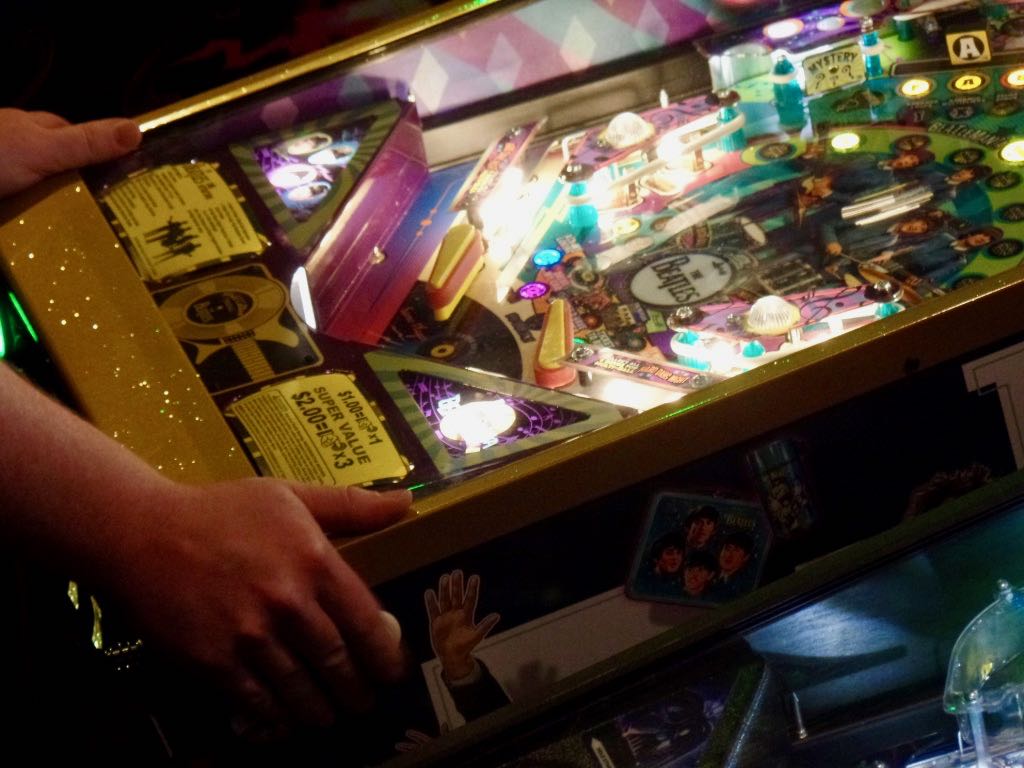 Finals! MWS sending the ball towards the center drop targets; you can see it streaking in the middle of the central band photo, near the upper right corner. 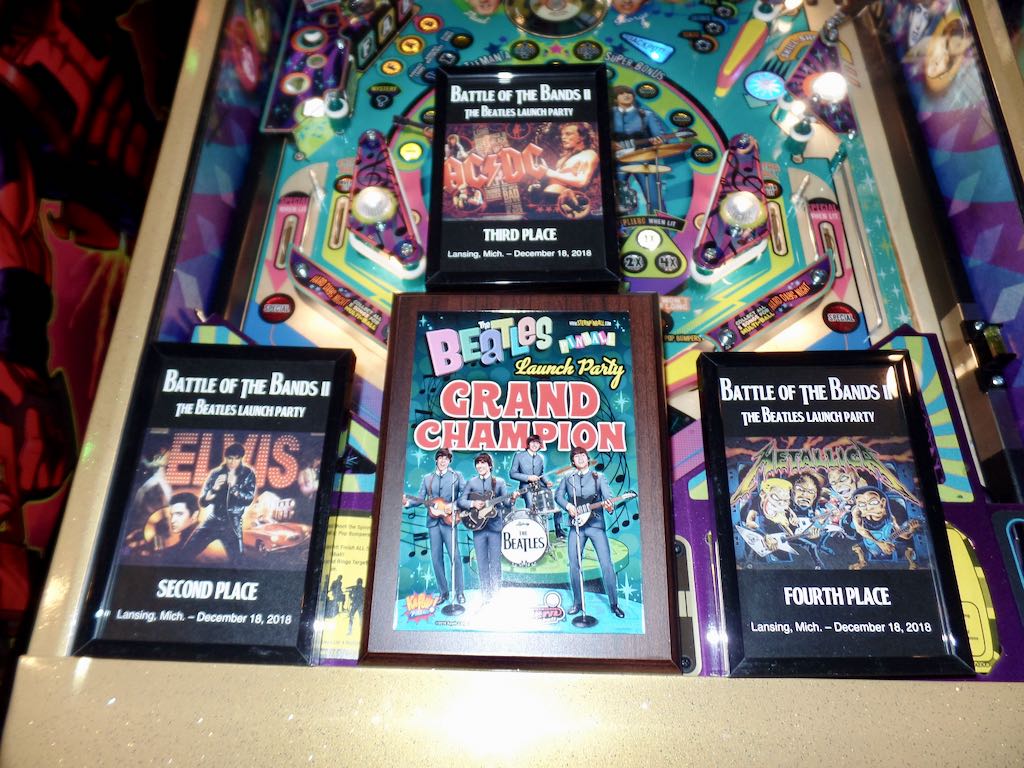 And, set atop The Beatles, the Stern-produced Grand Champion trophy and the second- through fourth-place plaques which

Trivia: In 1870 both the University of Michigan and the Michigan Agricultural College (now Michigan State University) admitted women. Source: Michigan: A History of the Great Lakes States, Bruce A Rubenstein, Lawrence E Ziewacz.

Currently Reading: Makeshift Metropolis: Ideas About Cities, Witold Rybczynski. A book I picked up, by the way, because I saw it in the library and recognized the name from a book he'd written about screwdrivers.