Christmas is a carousel and round and round we go

Getting back to journaling my life:

bunny_hugger's father got the idea, apparently at this year's Calhoun County Fair, that it would be great to make his own French fries. So his wish list consisted of some fry-making equipment.

bunny_hugger suggested that she and I could split it up, she buying some of it and me the rest. And this is where I first screwed up Christmas: I got the idea that she had bought all the things on his wish list, and then I'd pay her back the rest. It wasn't until the weekend before Christmas that I realized I had no idea where she'd put the package she'd gotten from Amazon. So I finally asked her where all this was.

She, of course, hadn't bought everything expecting to be repaid. She got the most-expensive thing on his list and left the rest (about the same cost) to me. But I'd never looked, so I hadn't realized. So we had this catastrophe: I didn't have anything to give a man who, I knew, was going to be giving me honestly too many books and videos and such. I could order something to be delivered late, but that's no fun. Worse, the actual fryer he wanted was no longer in stock. Worse, there was no promise it would ever be back in stock. And worse yet, he had nagged

bunny_hugger to the point she was fed up back in November, when he first put this on his wish list, on the grounds that the fryer might go out of production, and we'd pshawed that possibility. So we had some anxious times calling him to give the bad news, and to ask if there were another fryer that might be decent. (Unguided, I'd have just bought the next-bigger model of fryer, but this would have been unwise: it would probably have drawn too much power for their kitchen outlet to be reliable.) I at least put the receipt for this, folded, into a Christmas card and wrapped the card so he could open something. Later I realized it was another of the same card I'd sent them for Christmas anyway. (I had used two packs of cards to send to people.) Well, he said he didn't mind, and that he wasn't figuring to fry anything in the next couple days anyway. It's a kind attitude, but I admit I do worry he isn't actually that interested in frying anyway and just made it his item because he felt the need to request something.

He also insisted that when

bunny_hugger called to report bad news, he was afraid that the news was she wouldn't be able to drive her brother back to the airport. He's afraid of navigating Detroit airport himself.

bunny_hugger isn't fond of it herself, but can brave it.

So that was my big Christmas screw-up, leading up to our gathering bunny, bunny toys, presents, and a couple of days' changes of clothes to go to

bunny_hugger's parents and celebrate the holiday. Also going along with us: some chips and dip. When we went to Omena, in the Traverse Bay area, in 2017 we got a couple of spice packets that we never found an occasion to mix into a dip.

bunny_hugger's parents always have several huge bags of potato chips and dips to snack on while we're there, so this would make a perfect occasion to use it. She mixed the recipe together, while hoping that the spices hadn't aged into blandness, and we brought this to offer. Which was still quite good, yes, and was eaten ... not as much as we had assumed. They had more dips and snacks, including a grand spinach dip, that kept taking priority. We've still got some left, but also have plans to finish off chips and pita with dip over the next couple of lunches.

And that's what we would bring to Christmas 2018.

Footnote: they lasted one lunch once we really tried.

Trivia: In 1860 Samuel A King and James Wallace Black used balloons to photograph Boston from an altitude of 1,200 feet. Source: Maps and Civilization: Cartography in Culture and Society, Norman J W Thrower.

PS: How December 2018 Treated My Mathematics Blog, my routine self-examination.

PPS: A couple more photos from the end of the Calhoun County Fair back in '017: 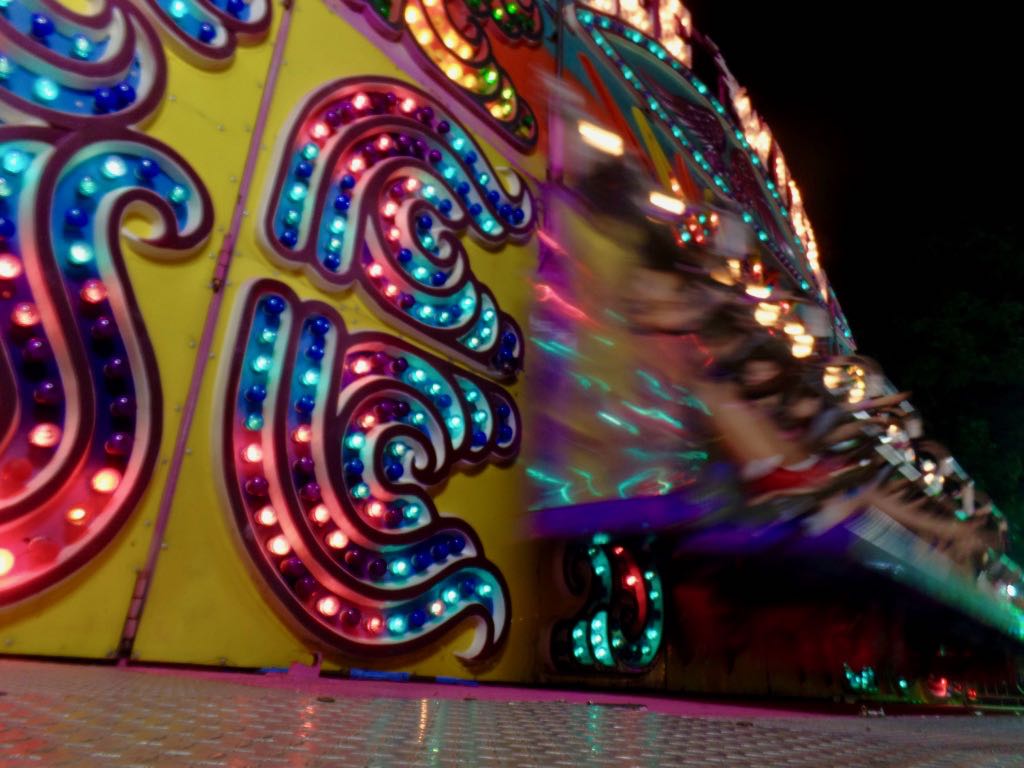 View from the platform of a Geee Wizz, a portable Moby Dick-style ride. Note the row of seats swinging up and to the right there. 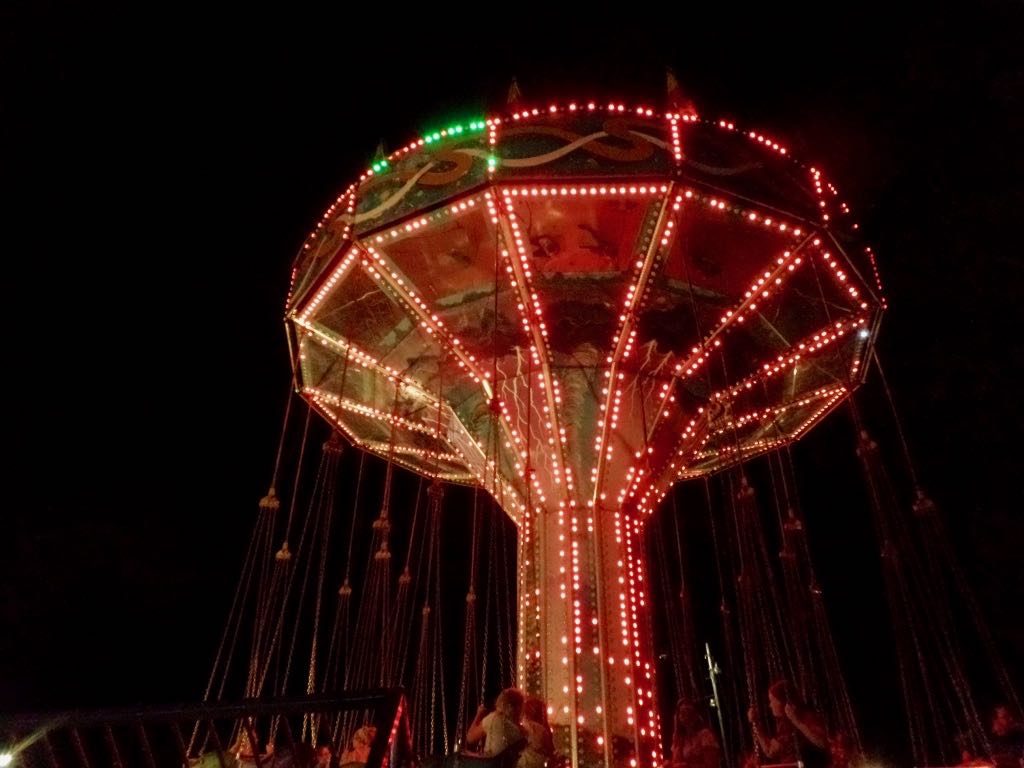 The tower of often lit bulbs on the swinging chair ride. I caught it at a bad moment; there's other shots that have enough bulbs lit that the outline gets washed out in generic white light. 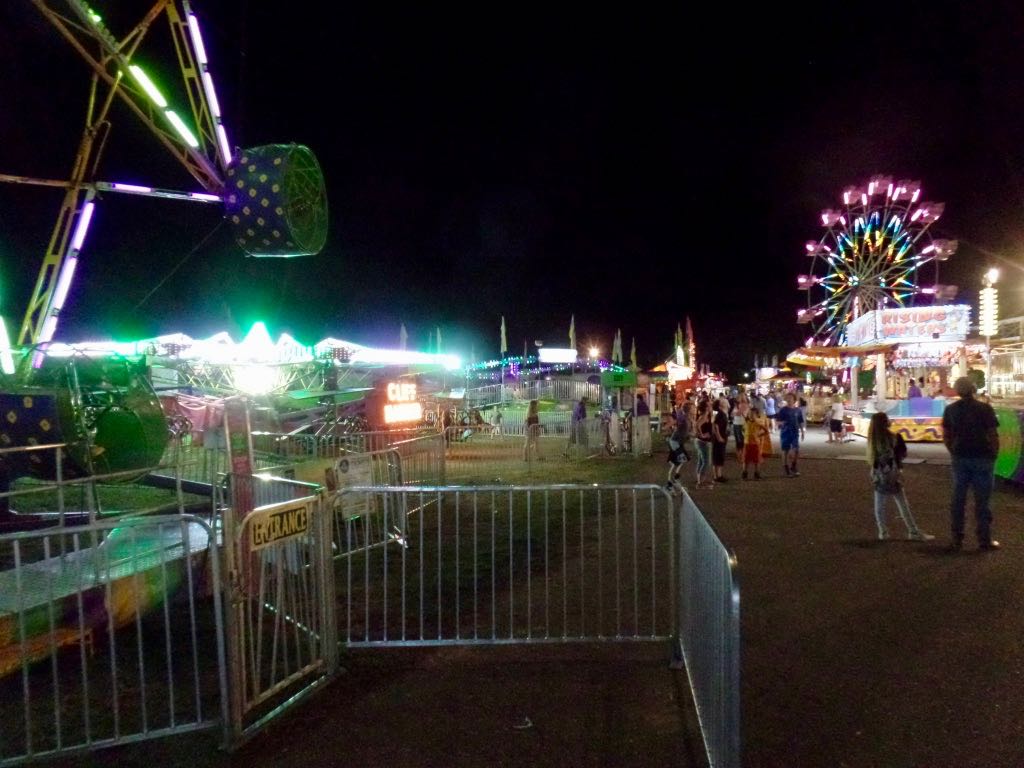 And here's some of the fairgrounds as seen from the ground.