Busy doing, wrapping things for everyone we know

We set out Christmas Eve day, later than we hoped to, as always seems to happen. We got to

bunny_hugger's parents' in time for the start of dinner preparations, handled by her brother and mother, who figured it wouldn't be so long as to need snacks be set out. This was optimistic; it'd be something like two hours. Dinner was earlier than last year's, when an overly-complicated menu took until like 9 pm to make, but we still probably should have got the chips and our dip out.

After dinner we set up Mice and Mystics: The Heart of Glorm. We've been playing this basic game with

bunny_hugger's parents, and the expansion set for a bit over a year now. Her brother was able to sit in as we tried to play the final chapter again. Somehow he was with us when we were trying to finish the original set too, in Omena back in 2017. Surely coincidence. We'd been trying this last chapter, the grand battle against the evil glowworm Glorm and his army of crystal-energized undead rats and roaches and such, several times over going back to September, I think, without getting it. And then this time we set up and ... got knocked out quickly. We re-set and tried again.

This next time we got much lucker with our dice rolls, particularly with ones that moved the time marker back. And with dice rolls and card draws that gave us mana, which in this game is slices of cheese. Particularly, my character --- Colin, the Prince --- was able to get enough cheese to finally, after like a year, gain a new Special Ability. And I --- me --- was able to gain the ability to use my special abilities well. Colin has (now) two particularly good abilities. One gives him the chance to spend mana to give another player an order, which, deployed correctly, gives us an extra move each turn. The other, the new one, lets him spend mana to get another player to re-roll dice, giving a chance at saving what would otherwise be a dire situation.

And between some better rolls, and Colin's new abilities and my better using those abilities ... we ... finally did it. We overcame Glorm, bringing what was an honestly grim scenario to a happy, even comical, resolution. Great family moment for Christmas Eve.

bunny_hugger got the other, full, expansion set for Mice and Mystics last year as a Christmas present. But, not really expecting that we'd beat it this time, she didn't bring it. And hadn't even opened it, so none of the pieces would be set up or ready to go, anyway.

This did take us to late enough in the night it seemed unwise to start something new, though. I think we did watch Emmet Otter's Jug-Band Christmas, but before starting the game. (If I'm wrong, then we watched Emmet Otter the next day, that is, Christmas night.) And it was a chance to marvel again at the many things done just right in that special.

So, and after a bit of late-night Internet activity, we went to bed. ... With a pause.

bunny_hugger had a gift for me. She's had a Stitch kigurumi for a couple years now, and loves it. I had said how I regretted they don't make an Angel kigurumi, not in my size. But she found one. At least a grey-market one; it seems to be an enlarged version of the legitimate Angel kigurumis out there. It promised to fit men up to six foot two inches, which is a little smaller than me still, but the defining feature of kigurumis is that they're loose fits. Why not give it a try?

She gave it to me privately, Christmas Eve, for fear that I would be embarrassed to dress in this bright pink outfit, or that I might not truly have meant it'd be great to dress as Stitch's TV-series girlfriend. Not so, though. I'm delighted to have it, and I did wear it Christmas day through until dinnertime. It's a bit tight for a kigurumi, but, like, regular-costume tight rather than ``I need to let this out'' or ``I need to lose twenty pounds and two inches''. It's great.

PS: And my last photos from the Calhoun County Fair of '017: 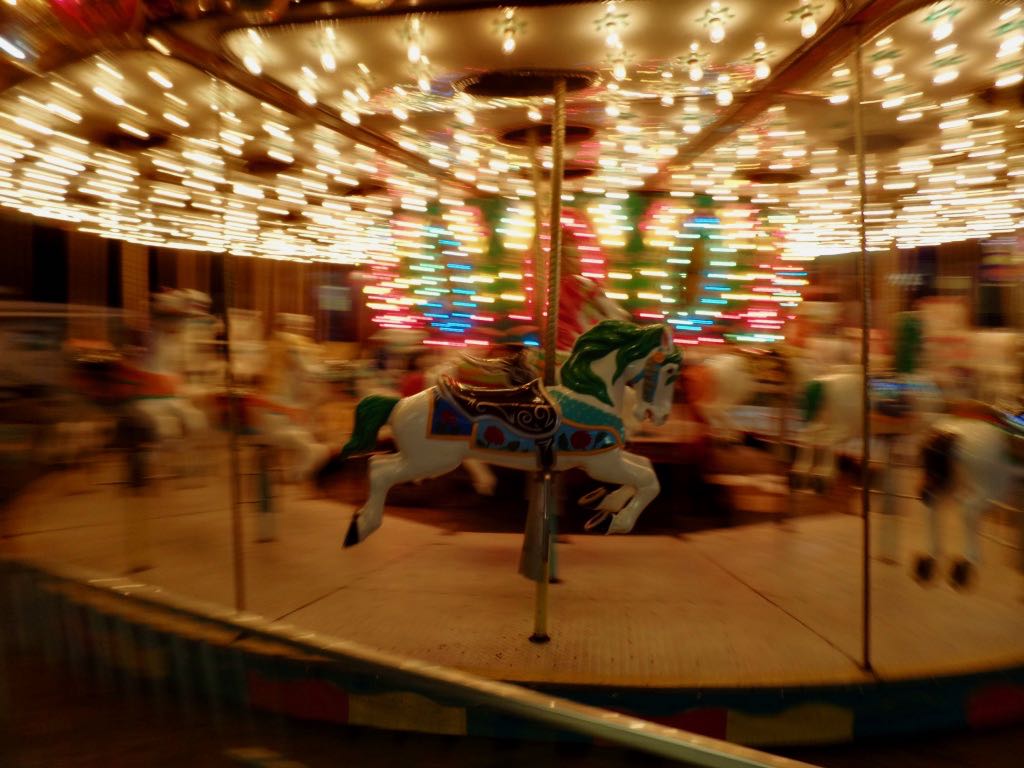 The Calhoun County Fair carousel runs at a good five rpm, making it an exciting if bumpy ride. Here, I get a decent shot of one of the horses going to hyperspeed. 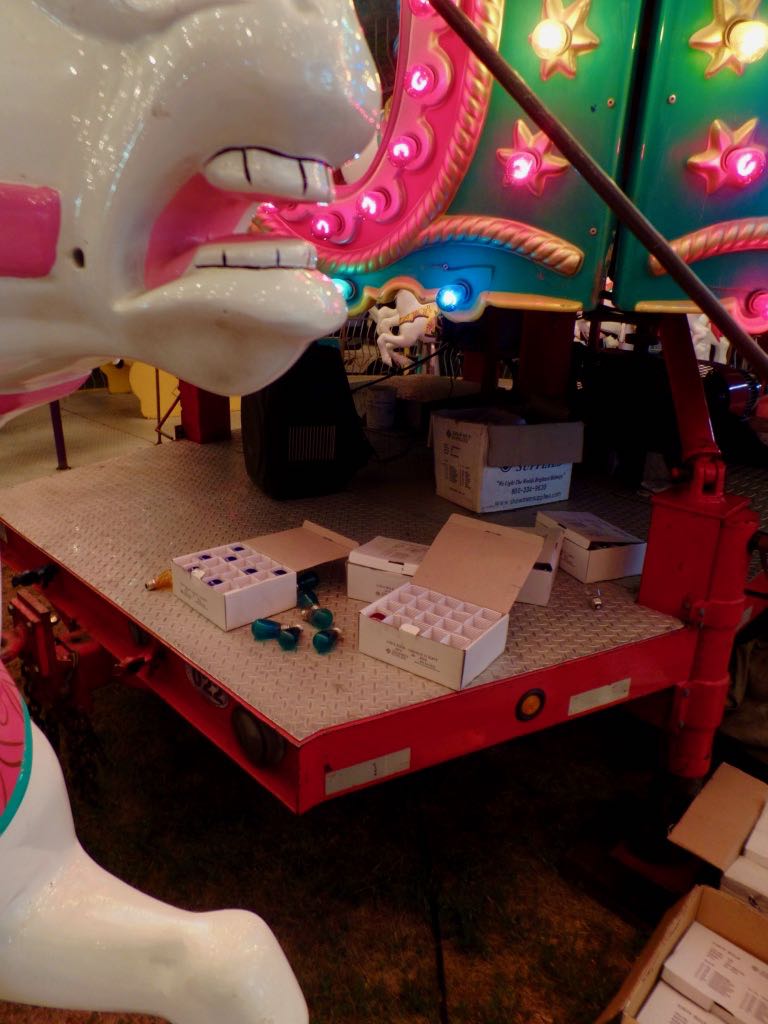 View past one of the inner-row horses to the boxes of replacement light bulbs. 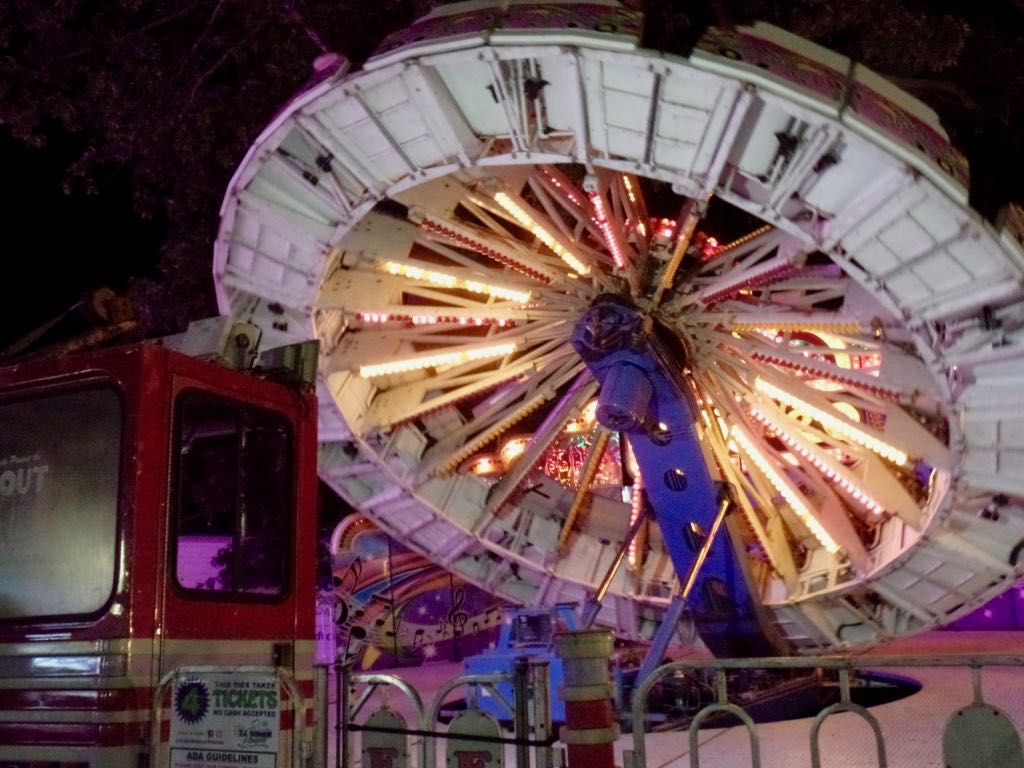 And a shot of the Wipeout ride, elevated and spinning. This ride would go on for just about ever, speeding and slowing and rising and falling, with the axis raising the thing also rotating. So if you need to ride something to about fifteen seconds before it's going to leave you too sick to continue riding, this is a good choice.