I was the first of the kids up Christmas day, and got dressed and came downstairs as Angel quietly enough not to wake

bunny_hugger would be upset with herself for how long she slept, missing time with her brother, but she hadn't gotten very good sleep on the inflatable mattress. Not while I was also sleeping on it, anyway. It's a small thing, and it transfers all the many movements I make right over to her, and she's a light sleeper.

bunny_hugger's father repeatedly defended the mattress as the ``most comfortable air mattress made'', but this is a case where a futon would probably be better. Anyway, much of the time she spent sleeping her brother was either sleeping or off in his room wrapping things.

And it was lovely when everyone did get organized and together. As we got to unwrapping presents there was even a bit of snow outside, a light flurry that didn't stick so we got all the fun of a white Christmas without the work. We had the chip dips made from those spices, yes, but the hot spinach-artichoke dip took priority. And it turned out we forgot to bring along one gift for

bunny_hugger's brother's girlfriend. He had been opening those and sending her pictures so we could appreciate them and he could save luggage space. It was one from me, a bread-warmer, that the store had wrapped up so

bunny_hugger's stocking. It was a bin of something like fifty plastic nails. They're designed as things one practices the art of nail-painting on.

bunny_hugger's father explained he had thought she could use these to practice painting of miniatures, like the Mice and Mystics figures she hopes to complete sometime. The reasoning was bizarre and the more he explained why he'd give this strange thing, the more

bunny_hugger's mother curled over, laughing. It was a gag gift. Her father had gotten the box of practice nails sent for free along with something or other, and he thought to make it a prank. And, must say, a prank that got us.

I was able to call my parents, who were visiting my brother and his family in Baltimore. The highlight there was chatting with my nieces. The younger niece asked me how to make an iPhone. I explained you had to take a box of iPhone powder and mix it in a bowl with some eggs and water. As she listened intently I had a moment of conscience and tried to underscore that you only do this with an iPhone mixing powder, not with a finished iPhone. Well, my sister-in-law hasn't called to complain yet, so far as I know.

We had our traditional viewing of the Alastair Sim Scrooge, including

bunny_hugger's father's traditional question of, ``Wait, Patrick Macnee [ who introduces the DVD ] is in this?'' He's the Young Jacob Marley. Also the traditional wondering of whether, as Macnee claims, his family really does gather around to watch the movie every year. We also had a traditional moment of complaining about the universal remote, because someone sold

bunny_hugger's parents a remote control far too complicated for their DVD-DVR-and-TV setup, or for that matter too complicated for any TV starship from before 2006. The thing has a screen in the middle of it. We had to pause a while for something, and the DVD player turned off, and her father doesn't know any way to turn the DVD player back on except by ejecting and reinserting the disc, so we had to find where in the movie we'd left off, and kept overshooting. So we lost parts of a scene that were, ultimately, not worth the emotional labor of getting back to.

After dinner, and dessert, we played a game of Betrayal at the House on the Hill with

bunny_hugger's brother. We asked her parents to play, but, as traditional, they didn't want to. They don't like the aspect of the game where the Betrayal happens, and the game shifts from cooperative to competitive play (typically) with a goal and new rules imposed by chance. (I suspect her mother would get the hang of it after maybe two go-arounds, but also understand not wanting to do something that seems too complicated to be fun.) This time around the Betrayal had one of the party determined to declare himself Pope by winning the hearts of seven electors. Yes, I complained that you're not declared Pope by the vote of seven electors. The game designers were thinking of the Holy Roman Emperor. The game was unmoved by my historical correctness.

bunny_hugger, who had the luck to be the betrayer, won handily, in good part by my making some bad rolls shortly after the Betrayal.

It wasn't yet late. But

bunny_hugger's brother had his flight home in the morning, and she was going to drive him. So he felt he should sleep early. So we packed up things, and made for an early bed.

Trivia: The first motion picture copyrighted in the United States was the five-second-long 1894 ``Edison Kinetoscopic Record of a Sneeze''. Source: American Cornball: A Laffopedic Guide to the Formerly Funny, Christopher Miller.

PS: From Early September 2017 when we drove to northwestern Pennsylvania for a last amusement park visit. We stopped in a nice central spot for lunch. 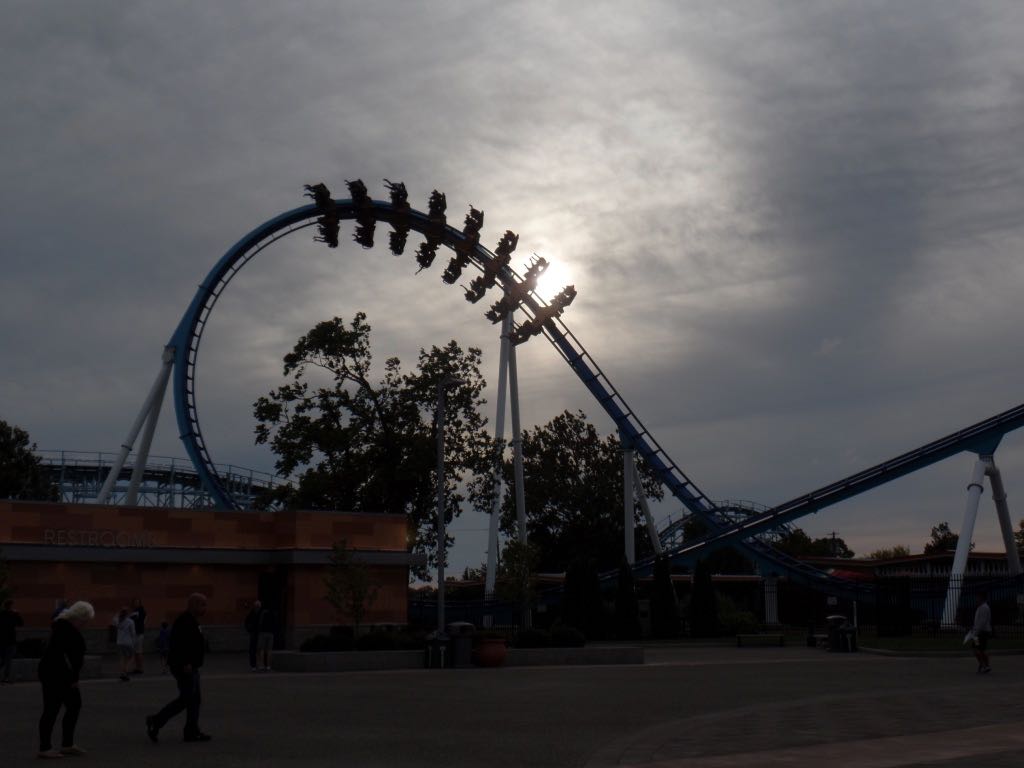 Since we have season passes to Cedar Point there's no reason, if we're nearby, not to stop in and appreciate things like how GateKeeper looks against the evening sun. 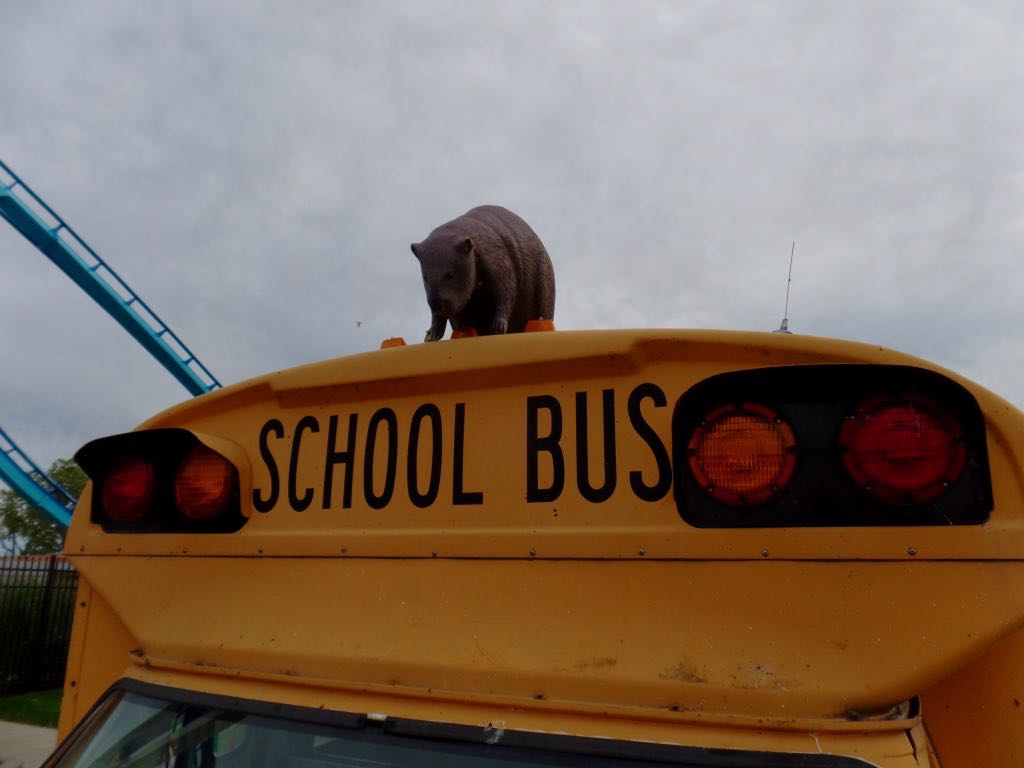 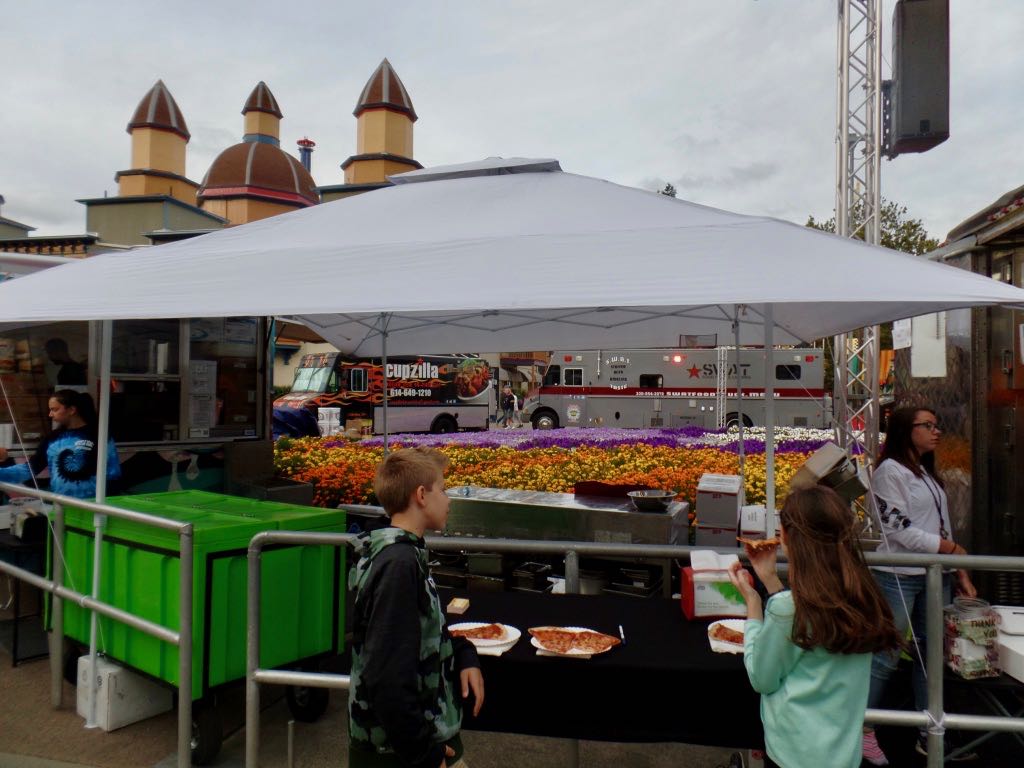 One thing that was going on: an 'Ohio versus Michigan' grease truck contest. So all along the midway were a bunch of vendors that added a lot of great options, many of them vegetarian, to the Cedar Point fair. We ended up going to Cupzilla there, and liking it so much we went back to it on Monday and again when they were in for 2018.