Sing some carols loud and clear and set the lights aglow

bunny_hugger woke early Boxing Day, I stirred too. She asked if I wanted to ride to the airport with her and her brother. I said I did. She asked, ``Really? Why?'' And I said that was a good question and went back to sleep. So I am told, anyway. I don't remember the experience.

While I slept, then, she drove her brother to Detroit airport. This for what we had thought would be a short flight back to Newark. Or not, anyway. When he was booking his return flight he searched for ``other airports nearby'', and thought he was booking a return to EWR. No; he misread SWF, which none of us ever heard of. It's Stewart International Airport, in Newburgh, which is like Newark operated by the Port Authority. It's about sixty miles north of the city, that is, farther away than some parts of Pennsylvania are. But there's a shuttle to Metro North, and that takes you into the city, and that's what he would be doing (he called to check in) while we finished packing up.

Were our time our own we'd have stayed into the evening. But we had obligations. Particularly there was preparation work for the Silver Balls In The City pinball tournament, one of the seven potentially standings-changing events left on the calendar. And one of the quarterly tournaments she runs to raise money for the humane society. This one, particularly, in honor of our lost rabbit Stephen. The awards for it needed finishing. Not much, since

bunny_hugger was reusing one trophy donated by Lansing League member DMC (and that already had a silver Santa Claus on top), and was giving out photo-ornaments that just needed pictures inserted in the frames for the other top finishers. But it still needed preparation. So we gathered Sunshine, and most of the things we'd need to bring back home, and went.

And once home got to the serious business of setting things up. This included getting the color pictures for the ornaments printed out (we have a black-and-white laser printer), trimmed, and presented. Which took so little time, compared to the usual painting and gluing and laminating and everything else of making a full ornament that

bunny_hugger started to feel preemptively guilty. Also we prepared the presents we'd be sending to my parents --- who, being in Baltimore, weren't at home to get anything and so were fine with our sending stuff late. This let us defer some store and post office visits from the busy time before Christmas to the busy time just after Christmas.

And we had also to make some decisions about Silver Balls. The format was to be a Progressive Strikes tournament. In past years it's been strikes: you play head-to-head matches until you lose a set number of games. It was four, the first time we tried this, in a tournament that ran six hours and got to Last Call. Since then we dropped to three strikes, and the tournament ended in a reasonable while. But Progressive Strikes are a bit different. In this you play in groups of four, and take zero, one, two, or three strikes. This depends on whether you finish first, second, third, or fourth in your group. It's a little different in styling. The question is how many strikes in total you should get. We settled on ten, figuring this would be on average the same number of rounds we played in previous years. Surely that wouldn't go wrong.

Trivia: In 1957 Harry S Truman proposed that the question of whether a President had become unable to serve should be given to a commission consisting of the Vice-President, the Chief Justice, the Speaker of the House, and the majority and minority leaders of the House and Senate, who would be empowered to select a group of medical authorities from top medical schools, which would judge the President's condition. Source: From Failing Hands: The Story of Presidential Succession, John D Feerick.

PS: From Early September 2017 when we drove to northwestern Pennsylvania for a last amusement park visit. We stopped in a nice central spot for lunch. 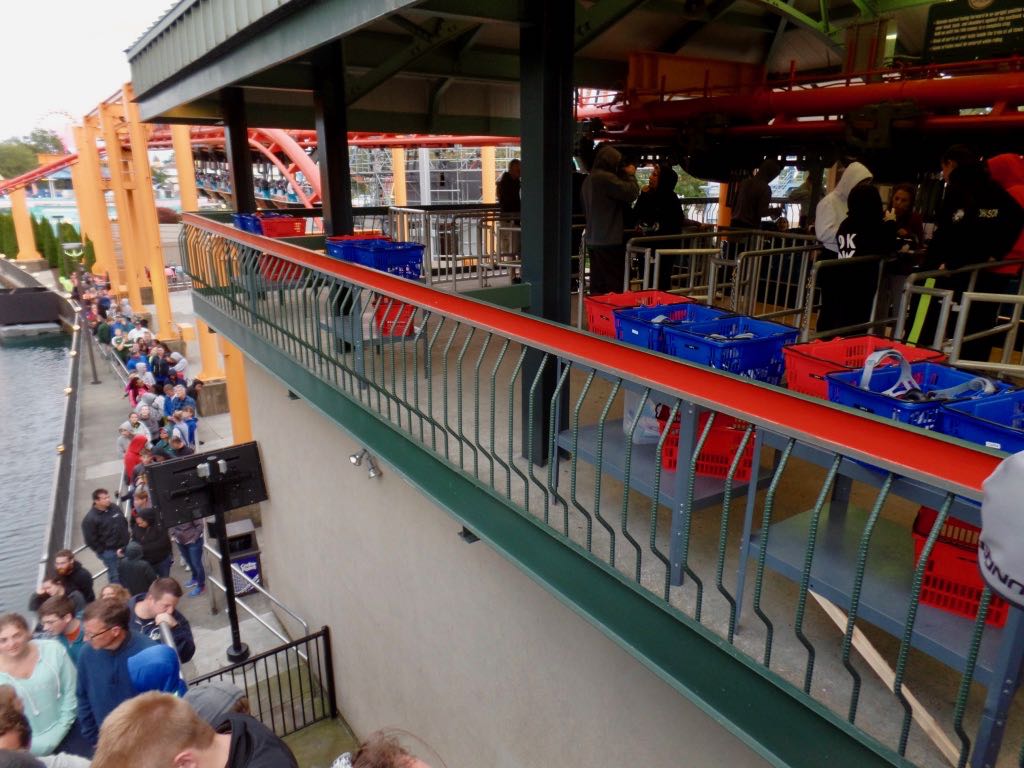 Our Labor Day weekend visit let us go to Iron Dragon, which was running a virtual reality coaster experience. This allowed the ride to run so slowly, with so much time in-between train dispatches, that it had a half-hour-long line when the park wasn't even busy. In ordinary circumstances there wouldn't be a line. 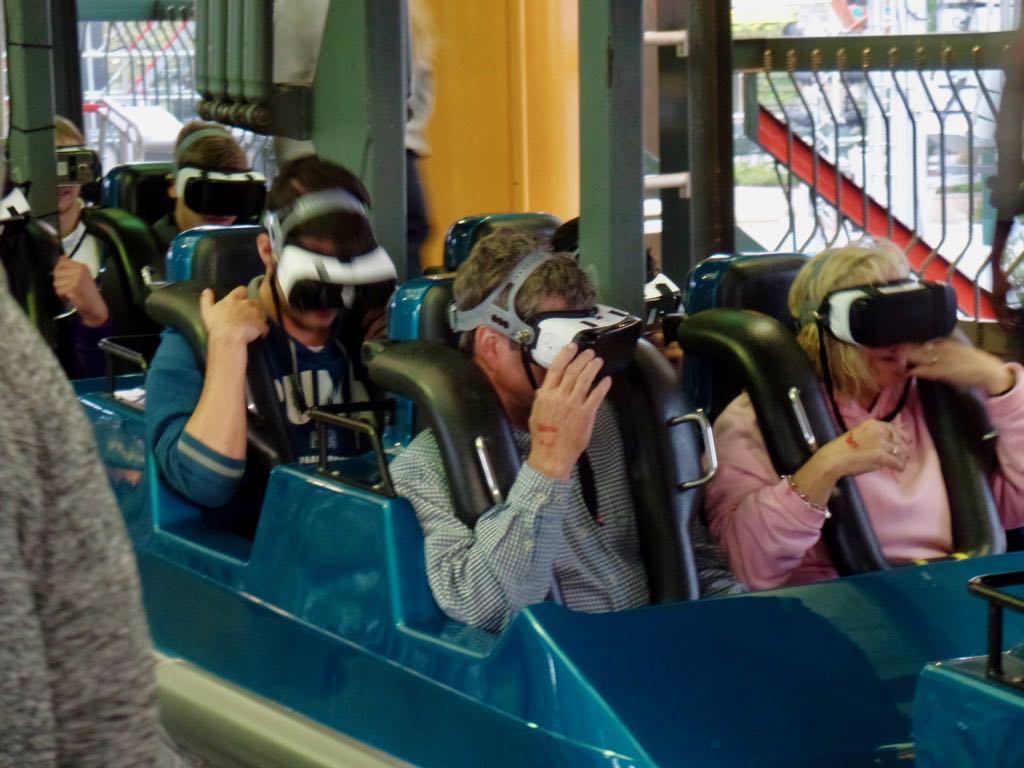 Riders fussing around with the virtual reality goggles, which gave one the image of sitting on a wagon-train cart that gets grabbed and flown around by a dragon. The idea's nice enough but I'm not sure it's better than just having a motion simulator instead. 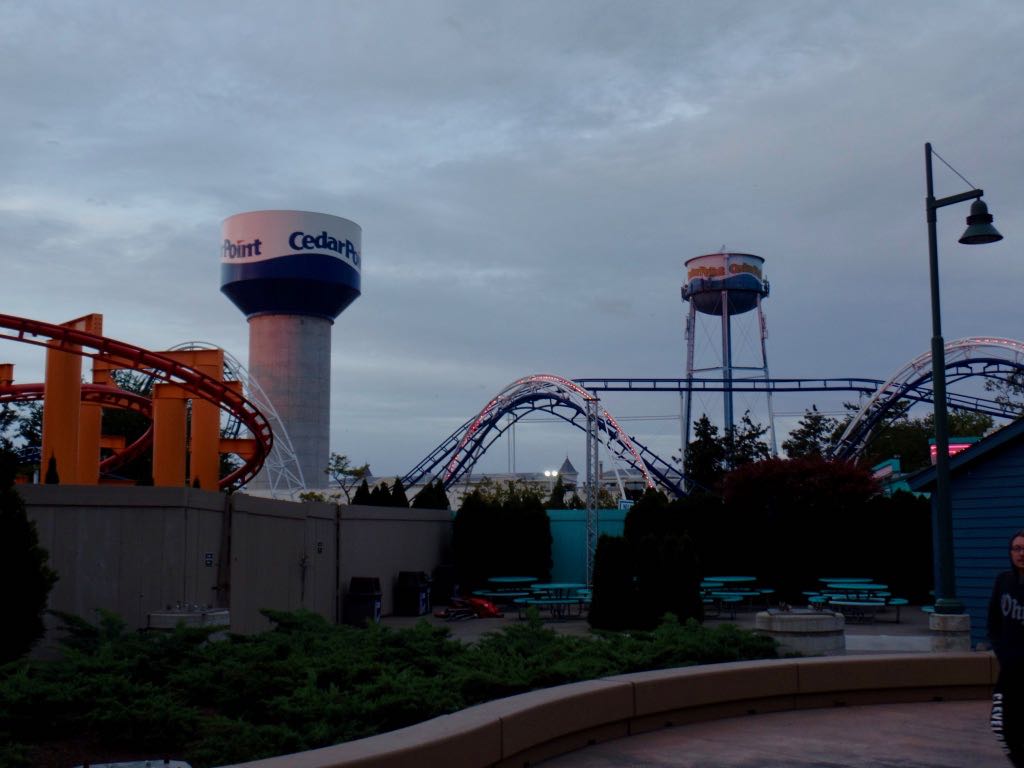 And a glimpse of the Cedar Point water towers, new one on the left, century-old one on the right. It'd be gone for 2018.