And above all this bustle you'll hear

bunny_hugger runs. The original ran obscenely long, the result of allowing too many strikes --- players had to lose four games in head-to-head play --- and too many players --- we ran out of tables, so some groups had to wait, in the first rounds, for another group to finish --- and too many games running long or malfunctioning, forcing replays. There's more tables in the venue now, although many of them are newer tables, ones that expert players can play forever. There've been fewer people attending Silver Balls, part of there being more tournaments altogether. But the tournament, in that hammock betwixt Christmas and New Year's, is one at a good time. The only conflict this time: after having nothing but karaoke nights Thursdays for months, and for several of the past years in the week after Christmas, this year, our venue was having an emo dance party. The clash between a Christmas tournament and an emo DJ was very funny to everyone who wasn't

bunny_hugger. Still, that wasn't to start until 9 pm, and would probably start late, and the tournament was slated to start at 7:30. Might well be something that only affected the last few people.

Also potentially trouble: the software available to run strikes tournaments doesn't work for Progressive Strikes, where you get from 0 to 3 strikes per match. I was confident we could run this all on paper, using index cards to track players, draw groups, and pick games at random. I'd seen them do this at a three-strikes tournament at the VFW Ann Arbor Pinball Hall of Names For Itself a couple years ago. And in the main, yes, this worked okay. The trouble came about four rounds in, when I made a mistake recording someone's strikes so that we mistakenly recorded them as knocked out when they weren't, and we had to do our best to compensate for that. Worse, as that got sorted out, another player insisted we check that we had his strikes recorded correctly, all the while that the groups that we ourselves were playing in get over there and play. It was honestly a relief when I got knocked out, and could dedicate myself entirely to the bureaucracy of tournament-running. I think the index cards basically worked, but it's too easy to go from 'this person finished second' to 'write two X's on their card'.

We got the approximate number of rounds right. And were even basically right that the emo dance party wouldn't be too distracting; the DJ was a bit loud, but not so much to spoil the event. Admitting here that I did put earplugs in. We've got a box of cheap earplugs brought to every pinball event, ever since we learned that asking the venue ``do you have anything scheduled for this night that we'd like to run a pinball event?'' does not mean they'll give us any hint when they decide later on to schedule something. The worst bother was a group sitting at the end of the balcony, listening to the music, wanting a group playing in the tournament to go away. They asserted one of their party was epileptic, and many pinball games do a lot with strobe lights. Maybe, but

bunny_hugger got the vibe they were just trying to chase people away from their corner. They had turned off tables, for example. But they accepted the assertion that this was a charity pinball tournament, and shuffled over to a table about a dozen feet away. And in more positive interactions with random people who happened to be nearby: a couple of the people playing darts donated $20 to the cause, which was sweet.

What we didn't get right was the timing. A dozen rounds would be a well-timed tournament at two-to-three rounds per hour, the pace of the progressive-strikes tournament we'd been at a few weeks before. But those tables were faster playing. Ours ... we had one round alone that took a full hour. Part of that because a game malfunctioned, of course on the last ball of the last player, and had to be wholly replaced. But part of that because one game of Junkyard --- which has the reputation for a good quick-playing game --- went on for an hour. The game typically scores around five million points. CST put up a score of 68 million points. And he came in second.

bunny_hugger did far better than me, getting into the final eight competitors. But we were still going on past midnight, past 1 am, finally to a match on Deadpool --- not a short-playing game --- between CST and MSS. Who was like a week off that astounding game where he earned a half-billion points on Bram Stoker's Dracula on his third ball. This while RLM, with whom MSS carpooled, tapped his foot exhausted and wanting to get home already because he had work the next day, thank you. (Also the week before, RLM had been organizer and winner of a Grand Rapids tournament that itself took until past 1 am, also on a workday.) CST had an awesome game. MSS had a good game, but it wasn't that good. CST took home the giant, Santa-tipped statue rebuilt from one DMC had donated. And we got home technically speaking before 2 am, with the resolve that we would not do a Progressive 10 Strikes when there were 22 people competing, not ever again.

PS: And some more of what we saw during the Cedar Point drop-in, Labor Day weekend of 2017: 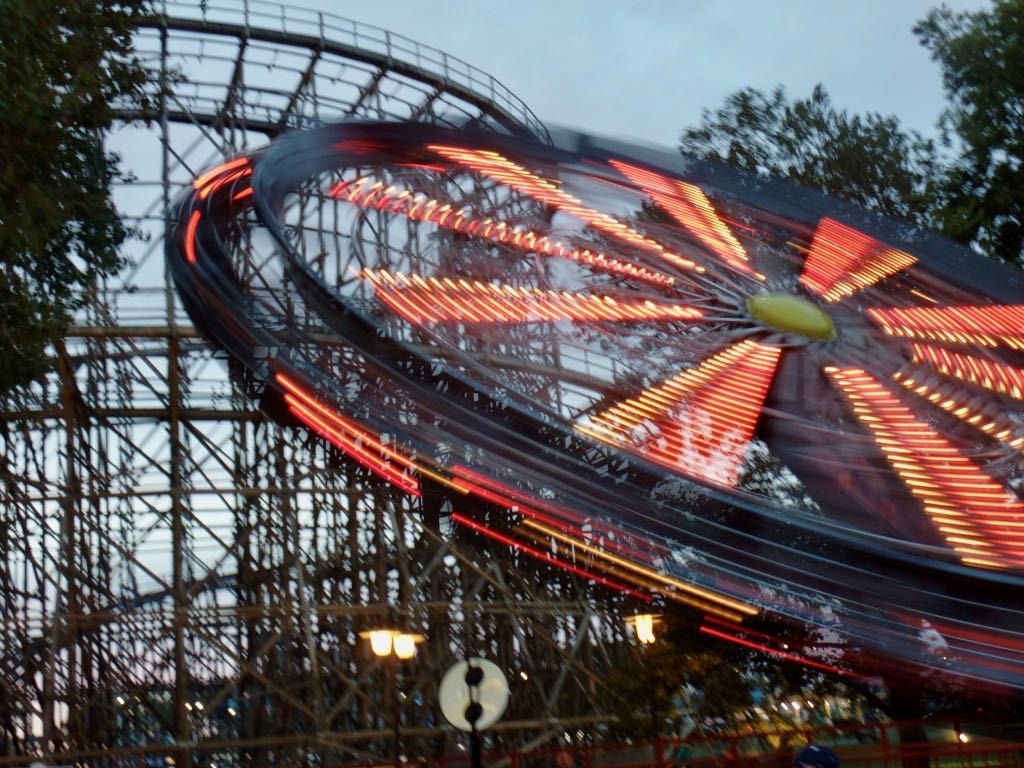 Witch's Wheel, in motion. We didn't have reason to think this was its last full season at the park; it was just pretty. In the background is the Gemini roller coaster. 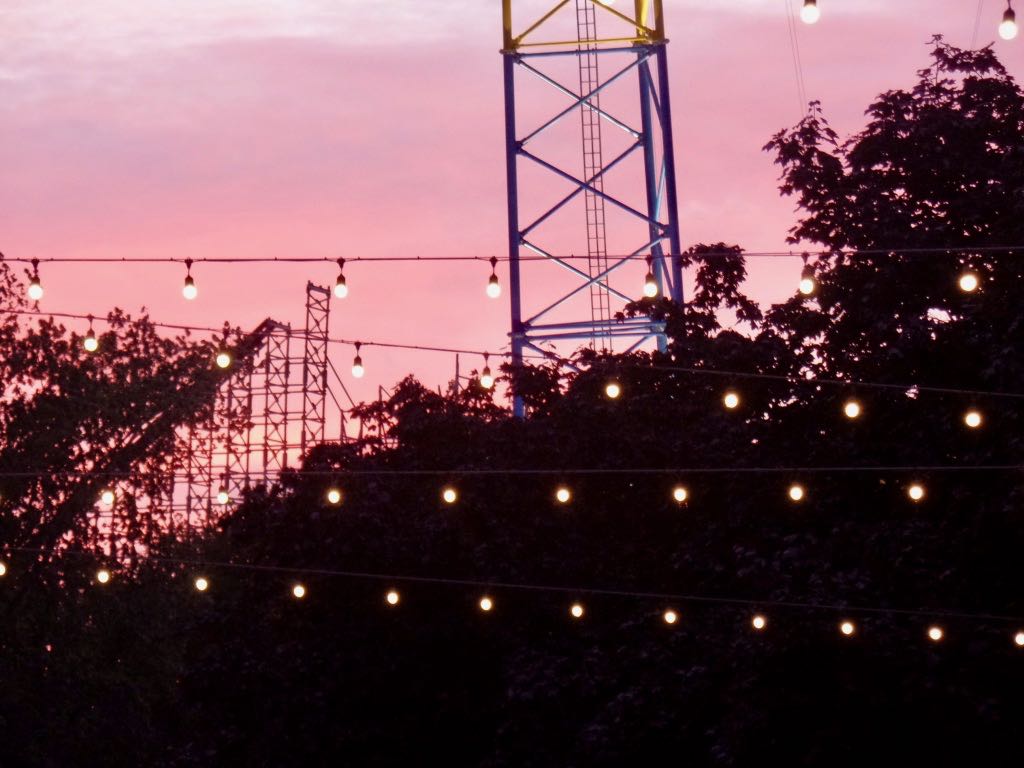 Glimpse of the roller coaster Mean Streak, being converted to Steel Vengeance, against a spectacularly-colored setting sun. 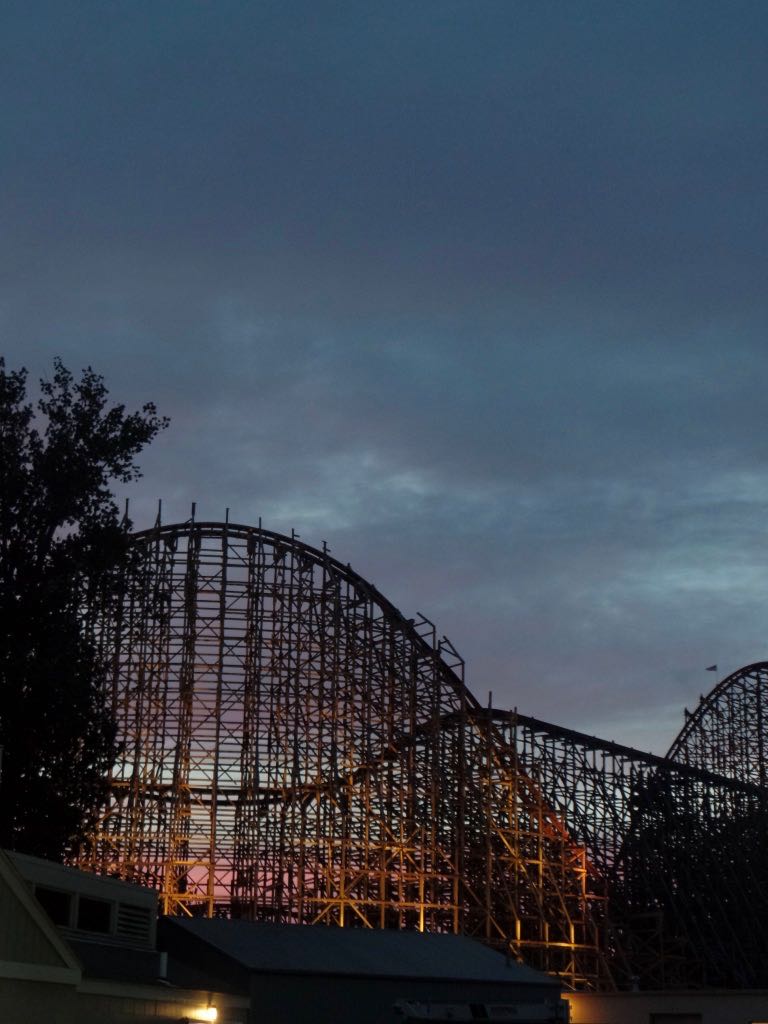 And some more silhouettes of Mean-Streak-becoming-Steel-Vengeance against the evening sky.