There are a couple things we try to do between Christmas and New Year's every year, besides the Silver Balls pinball tournament. Among them is Crossroads Village, the historical village of relocated buildings assembled just outside Flint. They decorate the place with a staggering number of lights, and run the short but full-size train along a path surrounded by holiday light displays. Plus it's a chance to visit their antique carousel, which still runs fast enough to be a thrill ride. Sometimes it's also a chance to ride the Superior Ferris wheel, which also runs very fast. We've been having a warm winter; there wasn't any snow on the ground, nor was there the threat of any. The day started out ridiculously warm, but it was forecast to be mid-to-upper 30s by night. Chilly but not actually cold.

We were threatened with a minor disappointment when we got there and went back to the rides first: the Ferris wheel wasn't running, according to a sign at the ticket booth. Except I thought I had seen it running. It turned out they just meant the Ferris wheel operator was on break. We spent some time, after our carousel ride --- and walking around examining the stuff on sale at the fundraiser table --- sticking close to that end of the village. When we saw the ride going again, we finished up experimenting with long-exposure shots of the village at night and got back to the ride, so you know where our priorities are.

There was another minor disappointment. There are a couple of gift shops at Crossroads Village, one-or-two of them in the storefronts that used to be a general store and a store-plus-post-office. (They share an internal door so I don't know whether to consider them the same store. Both sides have cash registers.) There also used to be a shop, with penny candies and the like, opposite the street from this. But it was closed, and dark, though we could make out a Christmas tree inside. Apparently it's now where they have Santa sit for visits. And since we were there after Christmas, no Santa and so nothing in that building for us to look at.

And then another disappointment. At the opera house they always have a Christmas melodrama. In this a couple of actors, including a great moustache-twirling actor who plays the heavy, run through a story about how the villain is planning to destroy Crossroads Village and only the love of the good-but-kinda-boring man and woman can save it. But not this year! They had a Christmas Magic show scheduled instead. It was a fun show, sure, and we got to sit in the balcony for what we're pretty sure was the first time. The tricks were the not-overly-complicated sorts of stage magic, cutting ropes into pieces that reassemble and tricks like that. One was even given to a girl who was brought up on stage as volunteer.

I know this makes it sound like the whole night was us seeing that things weren't what we wanted them to be. But this more reflects stuff that we weren't expecting. And it's not as if the Ferris wheel didn't start running, or that we were looking for something particular in the gift shop that we didn't ultimately find. Or that we didn't enjoy the magic show.

The centerpiece of the night, and almost of our time there, was the ride on the train. Once again we forgot to bring a rag with which to wipe clean the windows when they fogged up, but never mind. They had most of the light displays, many of them animated, that we remember from each year. And I think some of them even photographed all right in my camera's low-light mode. On the speakers they only played Christmas songs, and didn't mention the story of how they got a Christmas dragon. (They had ordered the dragon animated lights for Halloween, but it arrived late, and they rolled with it.) A little disappointing, but you know, not a serious problem.

We did buy some kettle corn there, and the village staff were very enthusiastic about my decision. One talked about it as me giving

bunny_hugger a great gift, in this. And when we were leaving the opera house after the magic show one of the staff stopped to congratulate me on the choice to get kettle corn. Well, it is good kettle corn, and we didn't eat quite so much of it as to make ourselves sick. We even had some for the next day.

Trivia: About twenty billion aspirin tables are consumed in the United States each year. Source: Molecules at an Exhibition: The Science of Everyday Life, John Emsley.

PS: So the next day we visited Conneaut Lake Park, for what we hoped to be a full-day visit to a park that's suddenly somehow no longer struggling so close to death. Here's what it looked like as we arrived. 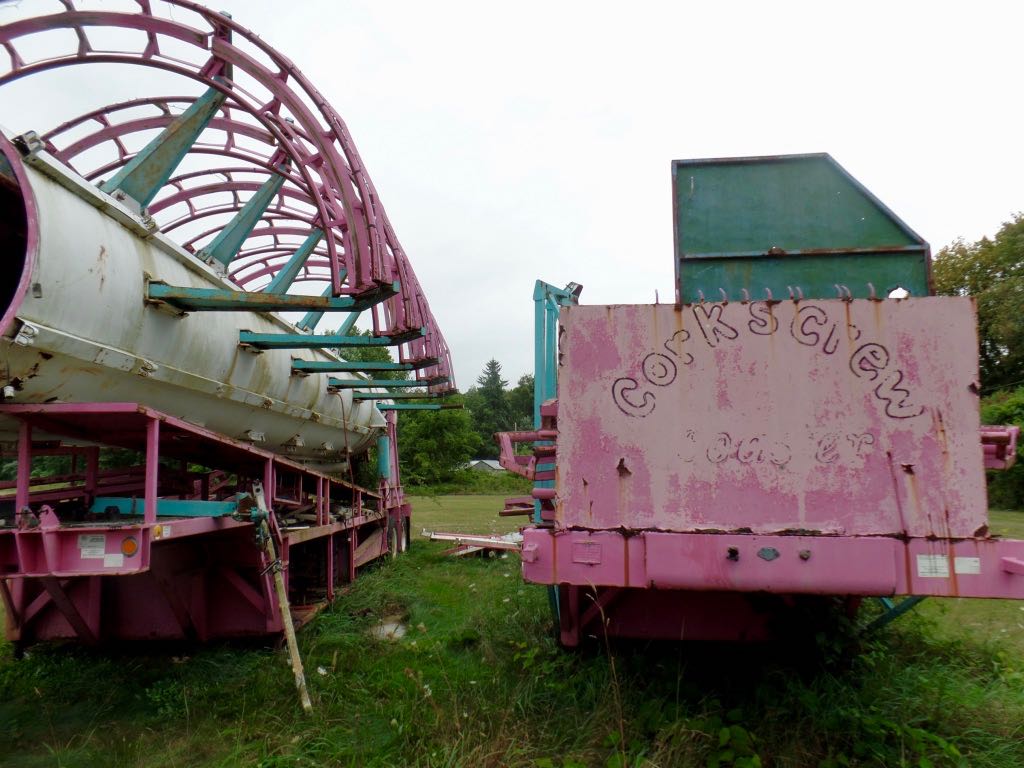 Abandoned Toboggan-model roller coaster at Conneaut Lake Park. This ride was owned by an independent concessionaire and just left in place; the park's moved it to the far end of the (grass) parking lot. The Roller Coaster Database claims the ride's name is Toboggan, even though, well, you can see what the ride signage says. (There are ride pictures showing signs that say 'Toboggan', though, from when it did run in the early 2000s.) 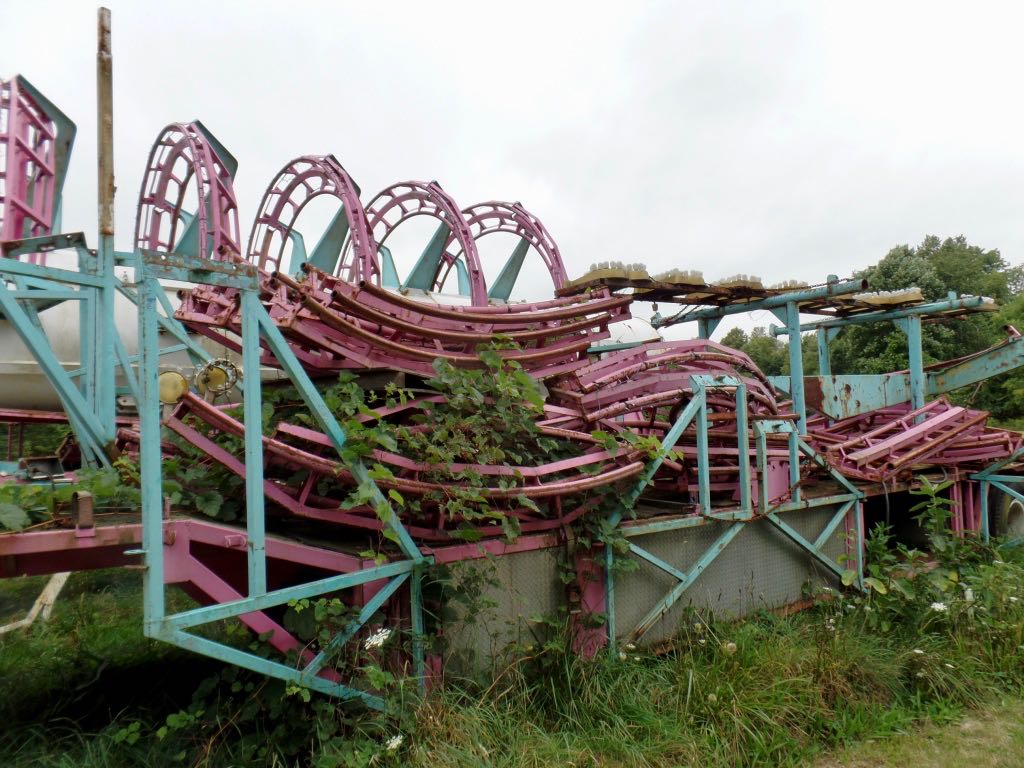 The ride hasn't run since 2006, and while it's listed on the Roller Coaster Database as ``In Storage'' that seems like a charitable description of things. 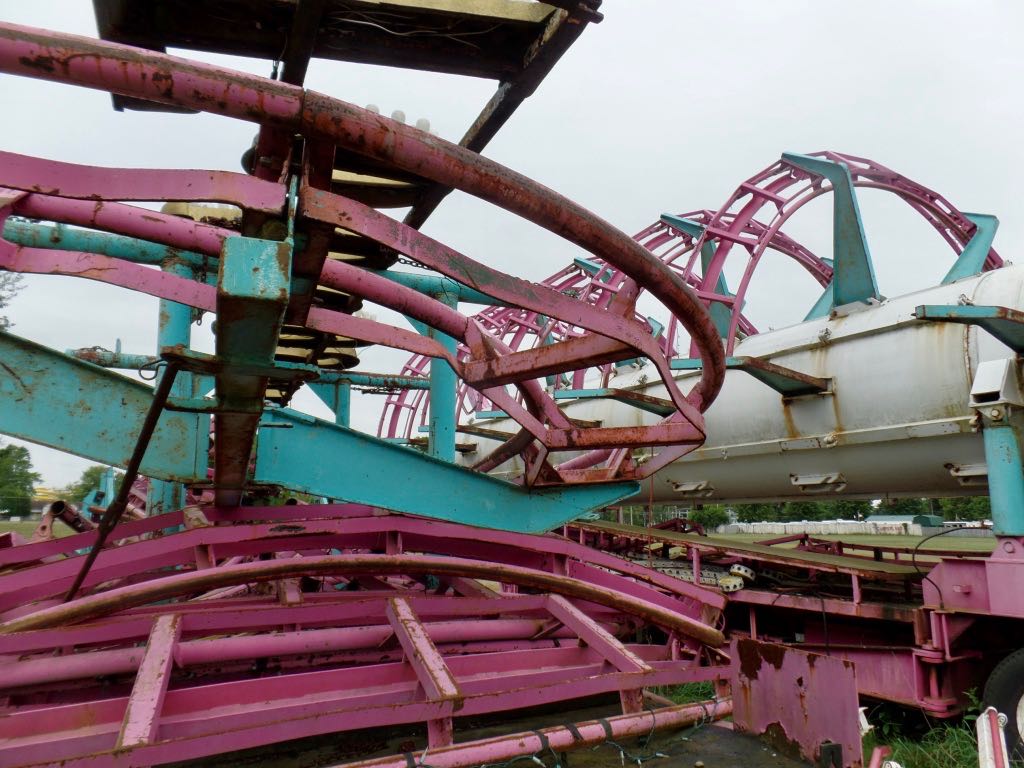 Close-up view of the ride disassembled and stacked and waiting for transportation or to reassembly or ... whatever. It would look like this, put together and running.