And then I saw the Jag slide into the curve

Flint is not quite on the eastern end of Michigan, but it's getting there. The next day, Saturday, we were going to the western end of the state. At least the lower peninsula. This was to Fremont, for two of the seven pinball events happening between Christmas and New Year's.

Special When Lit is the name of the amusement-game-routing company that AJH has formed. Its headquarters is the back of the financial-advice office his father PH runs. PH is the new International Flipper Pinball Association designate heading Michigan pinball competitive events. He took over the post in September. And PH decided that the venue for the 2019 state championship --- to be held next Saturday barring catastrophe --- would be Special When Lit headquarters. His reasons were good: they needed a place where PH could be sure of game conditions, and he only had a few weeks to select one. The place is private, so competitors won't have to risk random outsiders coming in and maybe messing up play. It's got a large number of games, and even better, games of different eras of pinball. There's electromechanicals, early-solid-state, late-solid-state, and modern games. The only real objection I would draw is that it's another west-side venue, and the west side of the state (well, the lower peninsula) has hosted the championships three years running now, and the east side is no less vibrant a pinball scene and should get its innings. But there wasn't much time to pick a site, either.

Anyway. The last weekend of December offered some important things. The routine finals for the Monthly and for the two-month-long ``league'' finals of Fremont. Potentially, a lot of points for the IFPA ratings. AJH and PH read and follow the IFPA rules studiously, and know how to get the maximum value out of a couple hours' pinball. Valuable time at the venue, practicing on the tables that will be at the championship. We expected a big crowd to be there. And there was, although not so giant a crowd as you might think: seventeen people (one of them a guy from Oregon who was visiting family). There's usually ten to twelve people.

bunny_hugger and I are regulars. MWS, coming from Flint, is a semi-regular.

So this promised a lot of pinball play. AJH and PH organized it well, three rounds of play, alternating between monthly and league tournaments in a way that's confusing, yes, but means that if you're eliminated you can go home sooner. A good strong finish in either round would put

bunny_hugger securely into the top 24; she'd been hovering too near the cutoff for months. It could also improve my and MWS's seeds. And there'd be only two more events in the year, neither of which promised such a rich harvest of IFPA points.

It wouldn't be, though. I had a pretty good first round for the monthly tournament. I picked the newly-arrived Gillian's Island, a 1992 Williams table that you never see in tournament play. It hasn't got much variety in what to do and the real killer is there's a move where a player can give everybody else but him a million points. I did this, in fact, but I managed to come back and nearly take first place despite handicapping myself a million points. But I got through that.

MWS didn't, knocked out after a tie in a bank (with me) that gathered a Data East Games of the 90s theme. Well, we played the Data East Star Wars, and Lethal Weapon 3, and Jurassic Park. The first game we'd played was Gilligan's Island, which isn't a Data East game but we agreed, it might as well be. It just plays like that. Disappointing to drive three hours one way (albeit two of them carpooling with us) only to be knocked out right away. Worse, though,

bunny_hugger also got knocked out, wrecking one of her two chances to secure her standings.

I'd make it through the second round too, but then get knocked out before the final four. This left me in sixth place. Between AJH and PH's understanding of the system, and the large number of high-valued players who came to the tournament, that was worth something. Wouldn't be like that any old month.

In the League tournament, though, things were more dismal. We all bottomed out in the first round, in positions from 11th through 13th, not enough to help any of us. Worse, it would turn out that JEK, who'd been well behind everyone all year, won this format, taking in 16.72 IFPA points. That's more than I got for my third-place Baby Food Festival win back in July. The action launched him way up in the standings, ahead of me, and undoing the bit of good work I'd done for myself the weekend.

My ultimate elimination took time, so MWS and

bunny_hugger were sitting around a long time grousing about their finishes and talking with other people and all that. By the time we left, after 9 pm --- and with the tournament still three hours from finishing, so maybe it's lucky we didn't do better --- it was starting to rain, and freeze, and freezing-rain. And fifteen minutes out we realized

bunny_hugger had left her iPod behind.

So we lost time to recovering that, and still managed to leave her travel coffee mug behind. But between that lost time, and the freezing-rain conditions, our prospects of getting to this birthday party of a friend in Grand Rapids were getting --- WAIT THE CAR IS SKIDDING.

I was taking an extremely gentle turn, at maybe 30 miles per hour, when I realized the car wasn't exactly behaving right. It was just drifting along its own way. I tried to steer back into the lane, and it wouldn't, and then the car started to rotate. I remembered back to driver's ed days: if the car starts spinning, steer into the turn! ... Which way is in? Like, the front of the car was going to the right, so do I turn right? Or left? When I couldn't figure out what to do, I stopped turning. I didn't slam the brake, for fear of making things worse, but when the car started slowing, drifting along the middle of the empty country road, I tapped and slowly increased pressure on the brake. We came to a stop at the edge of the road. And we all caught our breath while I tried to figure out where the emergency lights button was.

Fortunately we weren't going any faster. And the road was empty. But when we resumed, it was even slower, so we scratched the whole Grand Rapids idea. The drive to our home would be a bit over three hours total, compared to the two hours it should normally be, but we got there safe and sound.

Trivia: Before 1962, when it was taken over by the Port of New York Authority, the Port Authority Trans-Hudson Corporation (the PATH line) was known as the Hudson and Manhattan Railroad. Source: Railroads of New Jersey: Fragments of the Past in the Garden State Landscape, Lorett Treese. 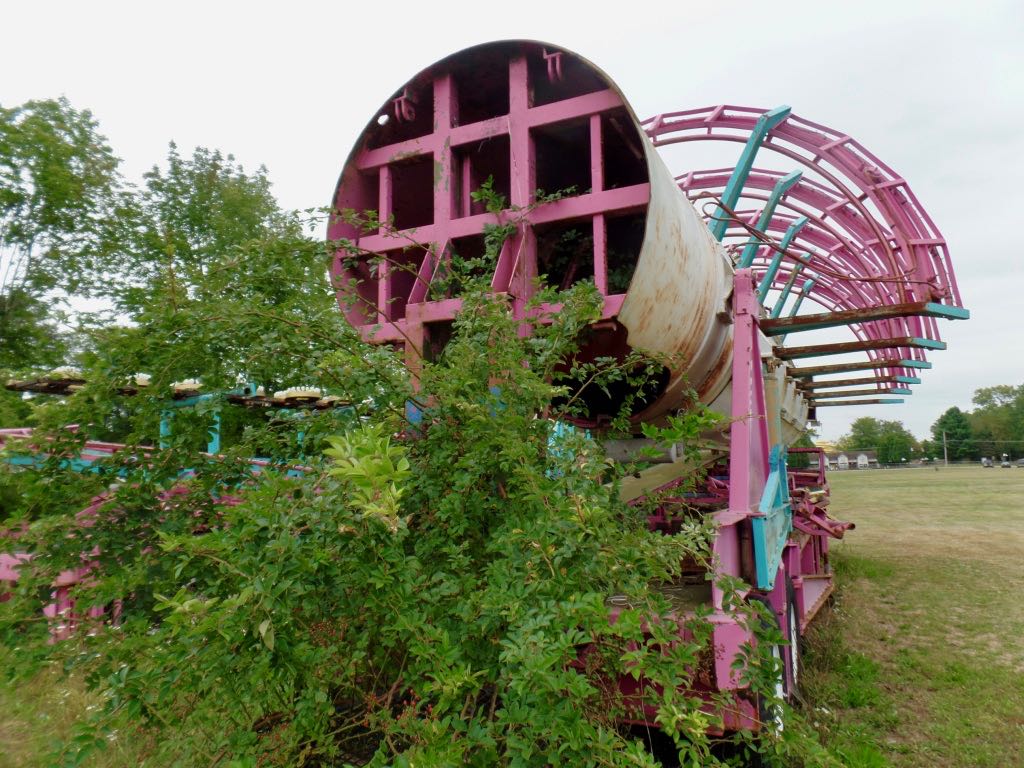 Viewing the Toboggan or Corkscrew Coaster from the end farthest from the park, showing something of the size of the grass lot available. 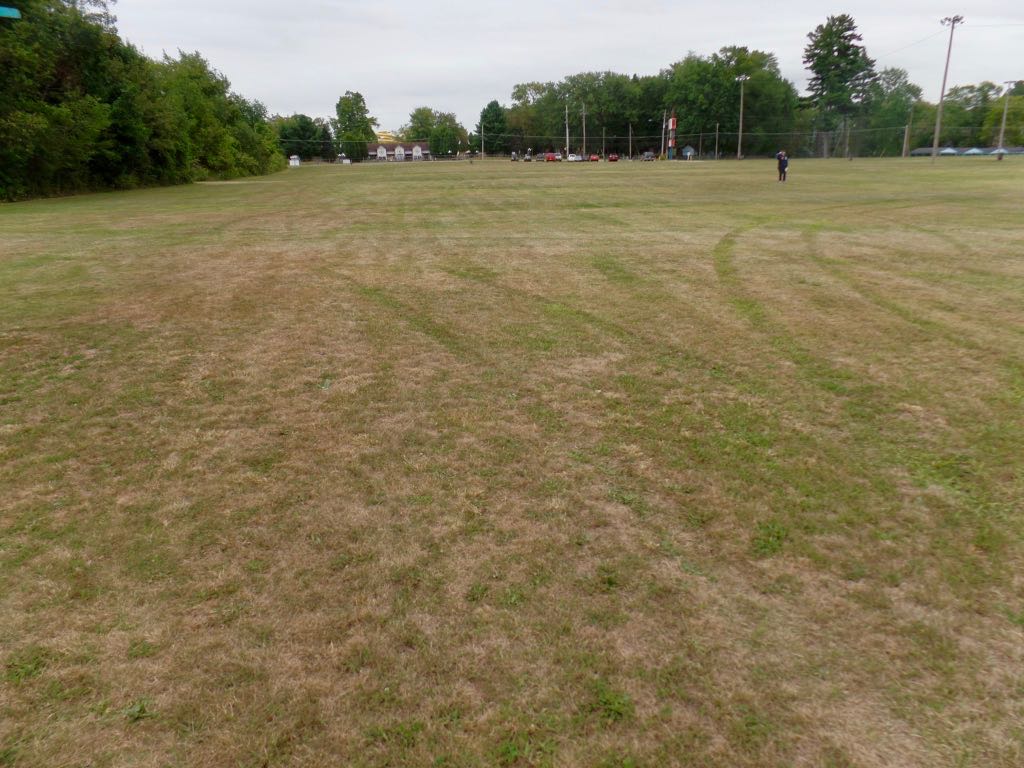 I took a picture of 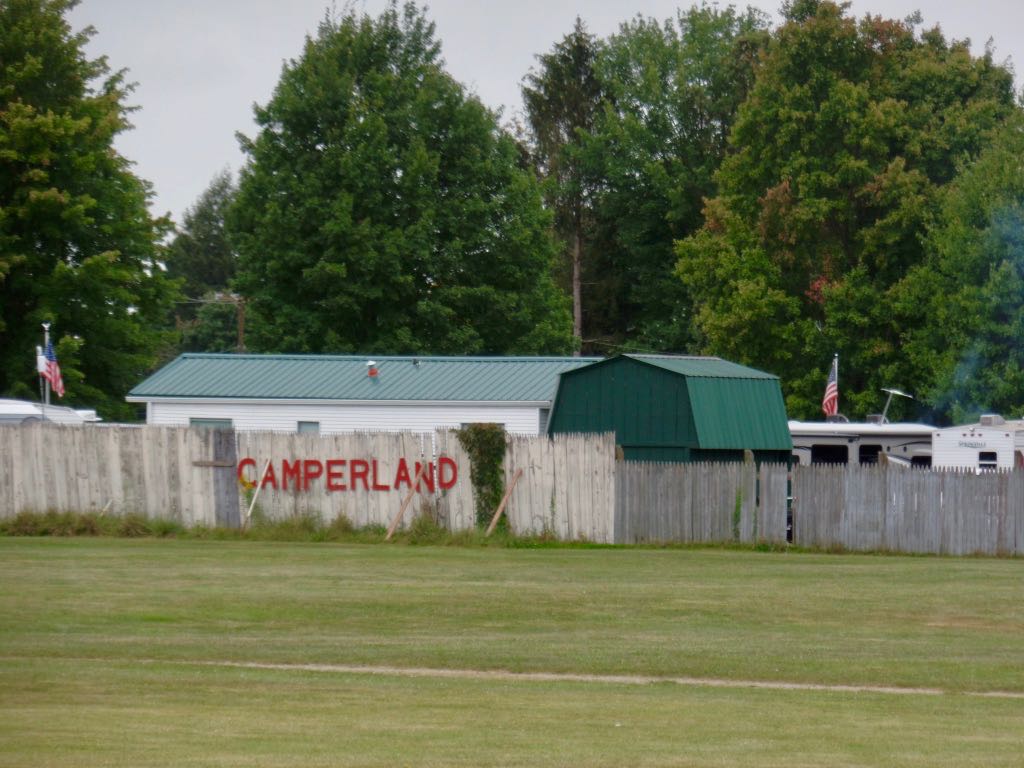 Sign, and fence, for the Camperland beside the amusement park.