And oh, the good times hurry by so fast

Between Christmas and New Year's we try to get to the Potter Park Zoo, where they set up the Wonderland of Lights each year. But to get there that week, between family needs and pinball needs and that they're only open for it Thursdays through Sundays we had the one chance to get there, the 30th of December. We set out a bit late, arriving about 6:30. But it's not a large zoo, really, and while three hours would be better for seeing all the lights and what animals were not hidden in winter quarters, two and a half hours would be adequate. Two would be just barely enough.

We got in, though, and spent a bit of time wandering around the gift shop, naturally. They turend out to have hot chocolate there, too, not just in the snack shop farther back of the park, but we figured we'd get some later. The we went to another building, the one up front that has activities for the kids and a couple of animals with handlers out in the open. I watched about two full cycles of a docent showing off the barn owl, and how dazzlingly silent the wings were when flapping. The docent did this by twisting his arm, so as to throw the owl off balance, and warned that yes, the owl might lose his footing altogether but it would be all right. This didn't happen while we were there. Not on display: a rabbit. The last several times they've had a rabbit on exhibit, and it was a strange feeling to see one so soon after the deaths of Stephen and then Columbo. But, no rabbit this year. They did have an armadillo, puttering around and poking at the collapsible pen in hopes of collapsing it. And sometimes attacking a plastic ball. The docent there also showed how the armadillo would roll onto its back, the better to lure unsuspecting nuisances in where they could be clawed. Good fun.

Outside, in the cold-but-not-frigid weather, we got to see some nice familiar sights. The many Christmas trees decorated, quite a few of them from local dentists somehow. The otter enclosure (although no otters were visible). The grey wolves, one of which started prowling around while we watched. Lights, including strands made to look like trees, and actual trees with spotlights giving them gorgeously complicated patterns of light.

At my suggestion we poked into the building that houses some of the primates and that's winter quarters for some of the lions and tigers. Also an enclosure that we would've sworn used to have lemurs and this time had ... ah ... one of those long-horned birds that's always turning its head away when you photograph them. It was cozy, though, and great seeing the animals.

Also we discovered some fossils. One of the plaques, about how zoos help endangered animals, we noticed was sponsored by Capitol Federal Savings Bank. If my research is correct, they changed away from that name as recently as 1991. Also inside the building, a bench sponsored by Theio's Restaurant. Theio's, to everyone's shock, closed in March 2018, and was actually torn down to the ground in early fall. Above the bench sponsored by the long-lost institution: a big, maybe 19-inch, Apple CRT monitor, from the era when everything was beige and they still had the rainbow logo. It wasn't plugged in to anything.

That done we ventured out again, walking past a wall of light strands, and in the general direction of what in summer is the bird enclosure. And the public address system interrupted its Christmas carols. A few moments later they stopped altogether. It was only 8:00. What we hadn't realized was that the zoo did not close at 9:00. We had remembered it wrong, and failed to check, and now it was the last day of the lights and we had only seen about half of them.

bunny_hugger, driving, took her disappointment to make a side tour. She'd seen a map of noteworthy light displays at houses in our neighborhood, and there was no reason we couldn't drive up to and see ... all right, the police have that street blocked off and there's a lot of flashing lights. Maybe not there. We went across the interstate, to the portions of our neighborhood chopped out of our universe when the highway came in. That area's got a reputation for being the worse part of town. But it's one that decorates much more for Christmas. We drove back and forth across the surface streets, finding not just decorated houses but, usually, at least one fantastically decorated house each block. One even with a nativity scene bright and wide enough that other cars were stopping and taking pictures too.

And some other trivial stuff. We found, for example, this one cute model of house that whatever builder put up over and over; I think we counted three in a row at one point, and eight on one not-long stretch of road. One at least had a dark rather than light color scheme, so there was some hope of telling these 1920s houses apart.

We spent maybe an hour in our consolation tour, and it was worth the doing. We got home, feeling pretty good about the night as it turned out.

Trivia: Though there are only fourteen different calendars, that is, combinations of weekdays and dates, in the Gregorian scheme, the calendar of 1872 was not repeated until 1912, forty years later. (The Julian year 1872 was repeated in 1900.) Source: Marking Time: The Epic Quest to Invent the Perfect Calendar, Duncan Steel. 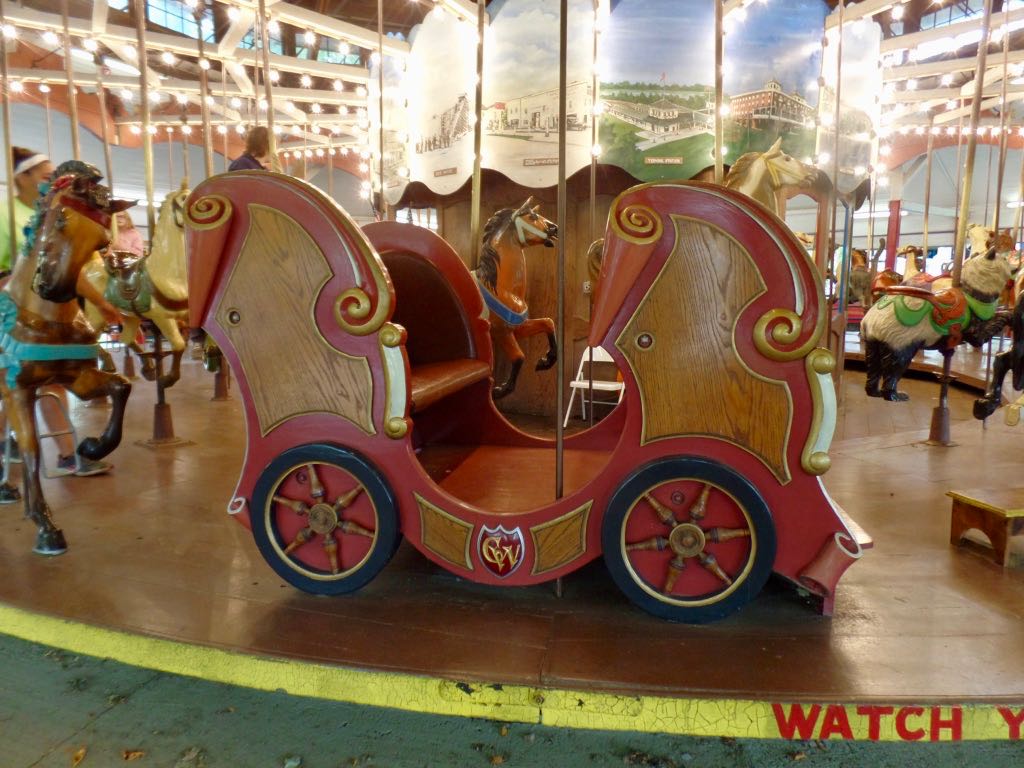 If your eye can't figure how to parse the shield on the Conneaut Lake Park carousel's gondola here into a 'CLP', that's because it's a 'CW'. This denotes Carousel Works, the company organized in the late 80s to build one new wood-carved carousel and that just kind of never stopped. 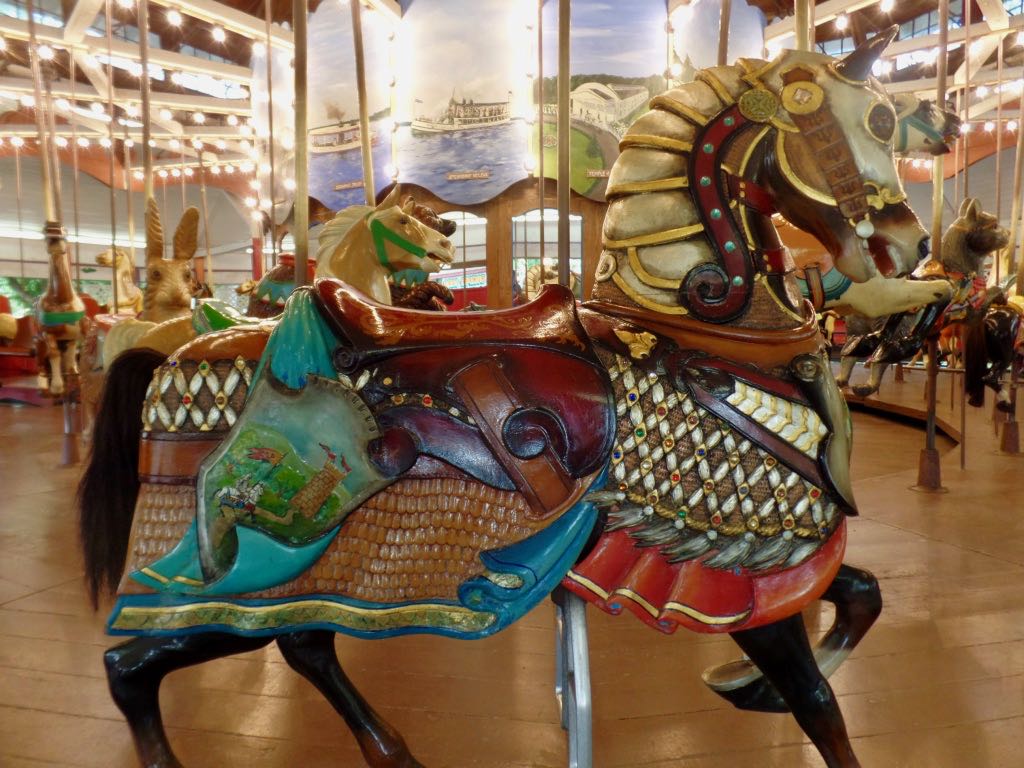 Possibly the lead horse for the carousel. Notice on the blanket there the little figure of a horse, tolerably close to itself, with the knight holding a 'CLP' banner and riding up to a castle. 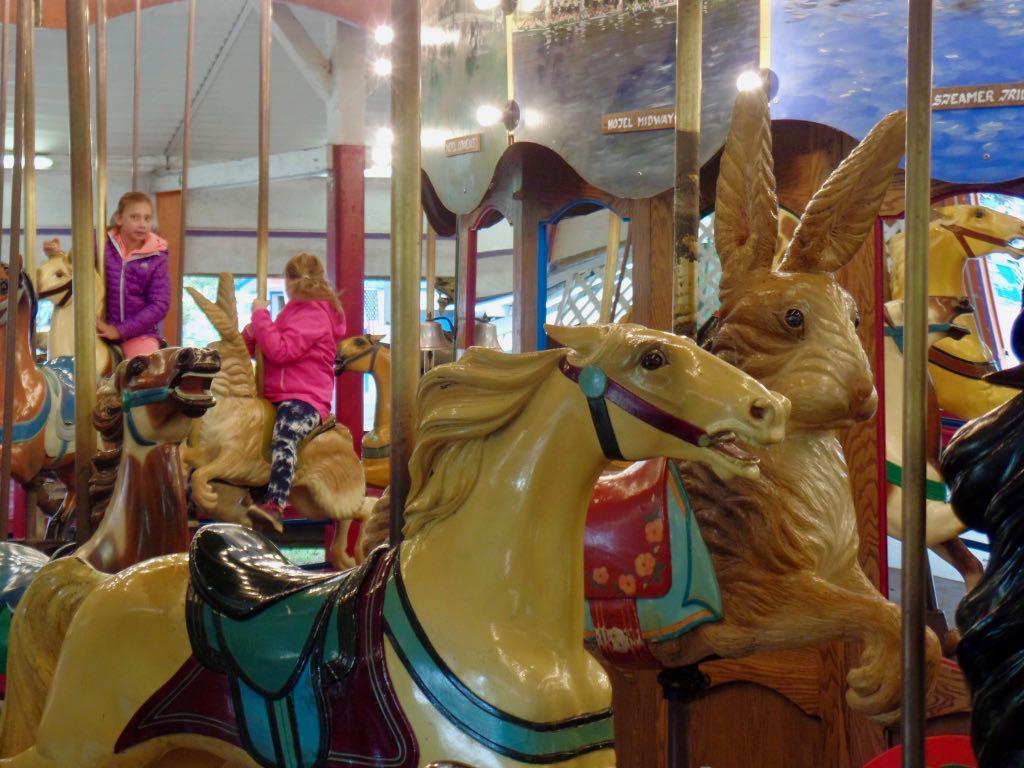 Some of the inner-row mounts on the carousel, including two rabbits. Replicas of antique mounts, probably not from this carousel originally, but still.