bunny_hugger noticed the problem first. Our pet rabbit was slow to finish her vegetables, which is weird for such a food-oriented rabbit but will sometimes happen, especially if, say, the dandelion greens seem a bit off or something. But she was leaving droppings everywhere. Rabbits will often leave a few pellets in random spots, but she'd been very good about keeping nearly all of them in her litter bins. But I diagnosed the problem first: she was hopping weird. She was holding her left hindpaw up, the way you might if you'd wrenched your ankle and still had to get around.

It was a couple days before we'd be able to get her to the vet's. But we could make some accommodations. Put her food dish lower down, so she wouldn't have to stand up so much to eat. Set out one of the low-rise litter bins, so she didn't have to hop in to use her litter. These two steps alone got her eating and litter habits back to about normal. And we had a hypothesis how it happened. The night before we noticed all this trouble we'd started a fire. As

bunny_hugger squatted by the fireplace and struck a match, our rabbit startled and scrambled into her hutch and up the ramp to the upper level. All the other rabbits

bunny_hugger has had enjoyed, or were at least indifferent to, the fire. Sunshine is the lone one who seems afraid of it. She eventually came downstairs, and lay in her open pen area, but on the side opposite the fire. We hypothesize that in the scramble away from the fire she caught her leg somewhere and wrenched her ankle.

At the vet's she was looked at first by T, the technician who'd done so much to care for Stephen. T had met Columbo, but we realized, hadn't seen Sunshine before. Nor Penelope, during the too-brief time she was in our lives. So we were happy that T could meet our outgoing, friendly, people-loving rabbit, even in one of the few settings that makes her nervous or even shy.

The vet examined Sunshine with a logical rigor that we both appreciated. She did speak of the threat of E Cuniculi, the parasite that destroys rabbits' brains and that we suspect killed Columbo. (Or a variant of E Cuniculi did; the titer for it had come back negative.) That would be dire. But the suddenness with which the ankle problem came on, and the lack of other symptoms, rated this as less likely. She couldn't find a specific injury, but there was this very sensitive spot in Sunshine's left Achilles tendon, not matched by one on the right. A very consistent flinch to being touched just in this spot. Her verdict was that it was probably a pulled tendon. The prescription, just what I'd imagined: a week on the anti-inflammatory painkiller meloxicam.

The inevitable question: how would she take it? Rabbits usually like meloxicam, because it's this sweet gooey liquid. But you get it from a syringe shoved into the face, which they might be cool to. Sunshine was suspicious and hesitant the first time we pushed it into her. A bit uncertain the second time too. After that, though, she was sold. She's always been a food-oriented rabbit, and something that's apparently that delicious? By the third day she was yoinking the syringe from us. By the fourth, she actually put her forepaws on me and shoved me --- punching me --- to get me to drop the thing and let her have it. So, no serious problems getting her to take her medicine. Also she's hopping better, too; by Tuesday her hopping was looking natural.

And we were prescribed to ``limit her activity'', lest she injure herself doing too much while she should be healing. But that's a hard rule for humans to follow, never mind animals. What we're able to do is close off her hutch, with the ramp, so that the most physically taxing thing she might do is unavailable. And keep her food low, so she doesn't need to stand on her hindlegs. She has done a bit of scampering around, in that tail's-on-fire explosion of energy that happy rabbits sometimes do. (One of these quick scampers managed to knock over two litter bins in one burst.) It's not much, but it's about all we can do.

Something we discovered incidentally was that she's got sore hocks. Little, lingering bruises on the back end of her feet. We had never noticed before and the vets hadn't noticed when we had her checked out in May. This might be a clue to her past; if she'd been kept on a wire-floor cage, it might have hurt her feet that way. It certainly can't be from her current housing; her pen area is fleece on top of a rug.

bunny_hugger, as usual wiser than me, has figured what to do when we next make a fire. We'll just put Sunshine in the upper level of her hutch, the place she wants to flee to, before we light the fire. This should keep her from injuring herself again, at least not this way.

Trivia: The New York Giants and the Brooklyn Dodgers attempted to travel by a motorcar caravan to their 1904 season opener. On the Brooklyn Bridge one car collided with a horse-drawn wagon, and the players went the rest of the way by train. Source: A Game Of Inches: The Story Behind the Innovations that Shaped Baseball, Peter Morris. 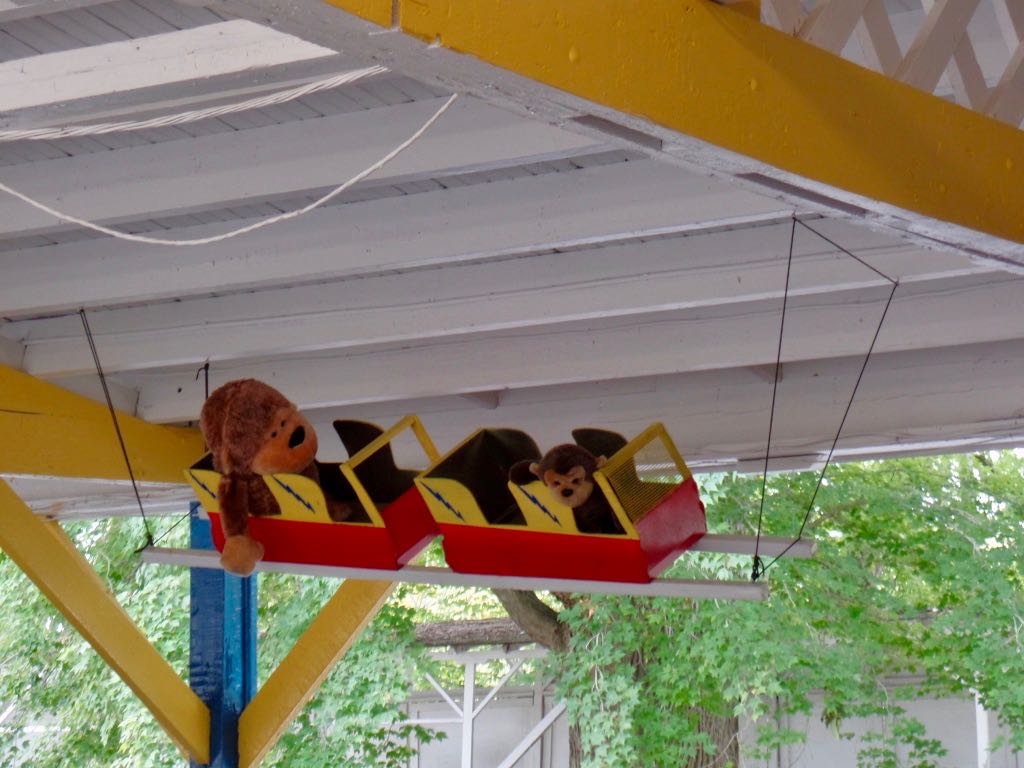 Tiny, monkey-doll-inhabited, replica of the original Blue Streak trains, a decoration hanging from the top of the Blue Streak station. 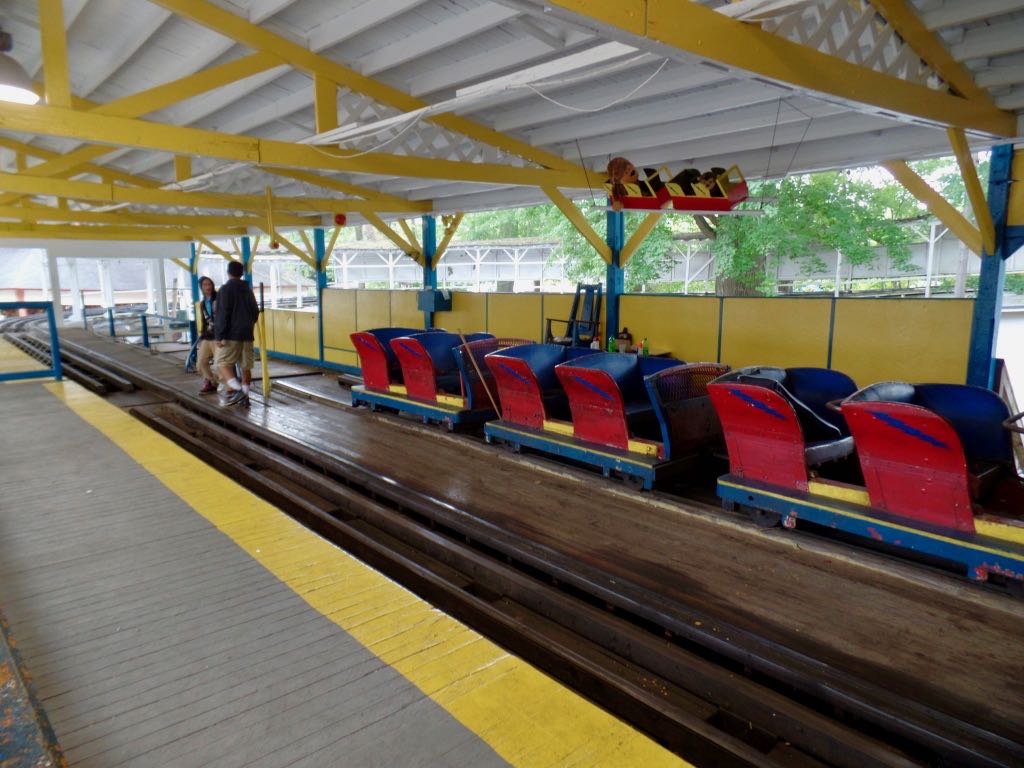 And here you can see the full-size original trains for Blue Streak, which haven't been in use for decades, but fewer decades than you might think. Also notice the nice big brake levers there. 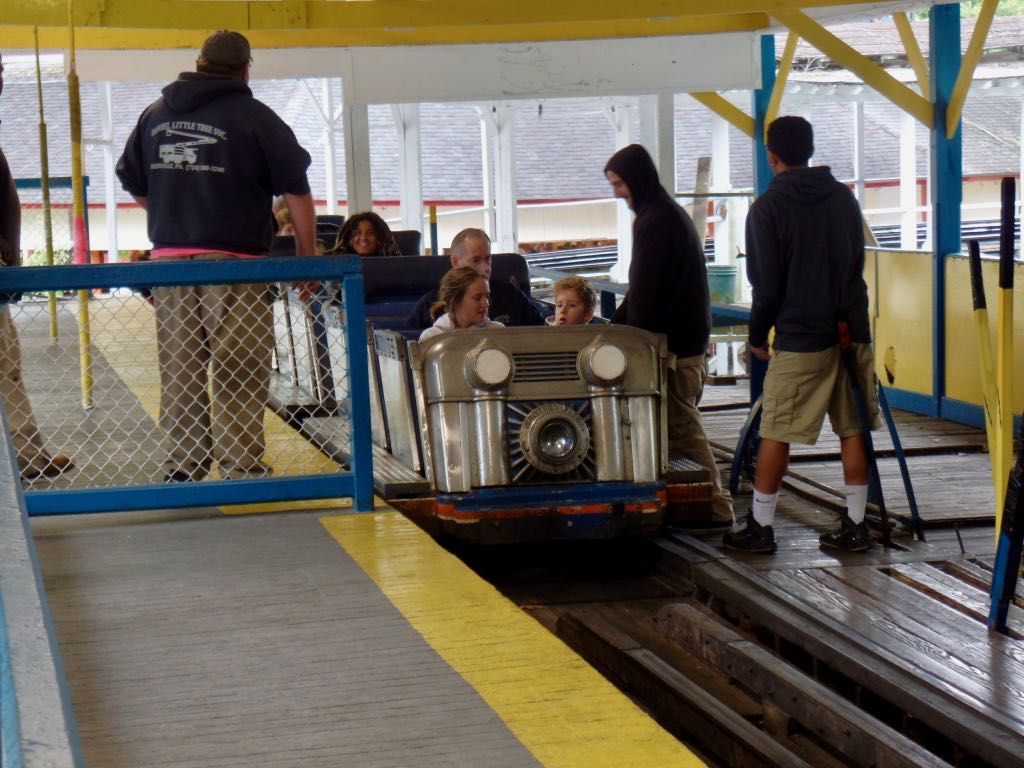