We were the first to see the purple skies

And then we can get into the first tournament of the 2019 campaign. This was a Bill's Basement tournament, at the home of BIL. He's got something like ten games in his basement, and a couple more in a bedroom. A couple times a year he has a daylong tournament and party. It's always reliable fun and somewhat crowded. He's gotten some different games from the last time we attended one, replacing Jersey Jack's Wizard of Oz with Jersey Jack's Dialed In!, for example. And different electromechanical and solid-state games. The format was to be eight rounds of four-player groups on randomly chosen machines, with International Flipper Pinball Association scoring: seven points for a first-place finish, five points for second-place, three points for third-place, one for last place. Top eight players going to the A Division finals, next eight to B Division.

A twist this time: we didn't know BIL's WiFi password and were too shy to ask. So we had no idea where we actually were in the standings all day, and could only go by our impressions. I'm not sure if this is better or worse than knowing exactly how far out of qualifying, or qualifying for A Division, would have been. Also a twist: AJG was there. He hadn't yet committed to attending state finals, but here he was breaking his latest retirement from competitive pinball. Later in the day he mentioned, the first time we were in a round together, that he and I hadn't had the chance to play together all day. About five minutes later I realized that would have been a time to tease him by saying yeah, I was surprised to see him at something as not-small-potatoes as a Basement tournament.

My first round was on Dirty Harry, against three guys I knew well from Marvin's League. And I had this killer second ball that by all rights should have won, except that PAT had an astounding third-ball rally. Fair enough. Next game was Aztec, an electromechanical, my traditional strong point. Aztec was also one of the games that, at Pinburgh 2016, gave me a complete failure round of nothing but last-place finishes. This instance of the table gave me another fourth-place finish, and later in the day would give me another, and a third-place. Next was Laser Cue, a solid-state game that I'd had several good and one great practice game on, and on which I crashed and burned. Older games are usually my relative strength; this was dismal.

bunny_hugger had finished her first round in fourth place, the next in third place, and the next round in second place. I advised her to keep up the pattern.

And she did: she took first place the next round. I did too, to my wonder, on the modern game Metallica. For me, then, a stumble on Dialed In; even though it's a Jersey Jack game, I put up a lousy one, coming in third place. But then, finally, some relief: we were on Genesis. BIL had announced at the start of the tournament that it was played on the settings that made my Pinburgh 2017 triumph possible, where knocking down these three drop targets in a row advanced all the body parts you collect in the game to build a robot.

bunny_hugger worried that he'd given away my strategy. I said, confidently, nobody was going to try it. I was correct, and got a first place. Then another round of Aztec beat me, and then I got back on Genesis. That time I ended up in second place, but by a whisker.

bunny_hugger went for the cycle again, a second, a fourth, a third, and a first-place finish.

So we were sitting around the living room, watching baffling time-filler shows and BIL's wife doing some craft projects. And CST and RC sitting on the floor, playing with BIL's new cat, a kitten about the size and heft of a kitten's own sneeze, a scene of incredible adorableness featuring a couple of middle-aged men. And someone called us over.

bunny_hugger and I were tied. We had to play off. Mercifully, not to determine who made it to B Division finals, just to settle seeding. But we'd both had two first-place, two second-place, two third-place, and two fourth-place finishes over the eight rounds. And she beat me, fair and square.

I had a lousy playoff round, going third, fourth, and fourth, including another rotten game of Aztec. I don't know why I couldn't get the hang of that game; it's understandable not to play well in a tournament but usually you can have a good ``revenge'' game afterwards, and I couldn't. But somehow the older games that usually like me so did not that day.

bunny_hugger, meanwhile, had a good playoff round. I think she had two second-place and a first-place finish, winning the B Division. Which is great. My first-ever first-place finish was also at a Bill's Basement tournament, B Division. Her trophy's more exciting: it has a small light, at the base of a lucite pillar that illuminates a replica of the Genesis pinball table. It's great.

We had carpooled, at least from Lansing, with JTK. He's one of our Grand Rapids friends, and the guy we'd carpooled and roomed with at Pinburgh 2018. And we realized this was the first time we'd seen him since Pinburgh 2018. MWS had planned to be at the tournament (he wouldn't carpool with us; that wouldn't make sense), but he was feeling sick and had to bow out, leaving room for AJG, the top of the standby list, to come in. AJG would come in merely third place, but still take home 11.01 IFPA points. So if this year is anything like last, he's already one-sixth of the way to state championships for next year.

bunny_hugger, finishing in ninth place behind all the A Division players, earned 2.78 IFPA points. It's probably already one of her top-twenty finishes of the year, although it's only about 1/24th of what she'll need to make state again. Still, three points in January is as good as three points in December, and there's still whatever she can get in December. (I got 1.25, which is better than nothing, but won't be in my top-twenty unless I have a dire year.)

Trivia: There are only about seven hundred miles of unclaimed ocean space between the Exclusive Economic Zones of the Cape Verde Islands and the St Peter and Paul Rocks (owned by Brazil) Source: Atlantic: Great Sea Battles, Heroic Discoveries, Titanic Storms, and a Vast Ocean of a Million Stories, Simon Winchester. 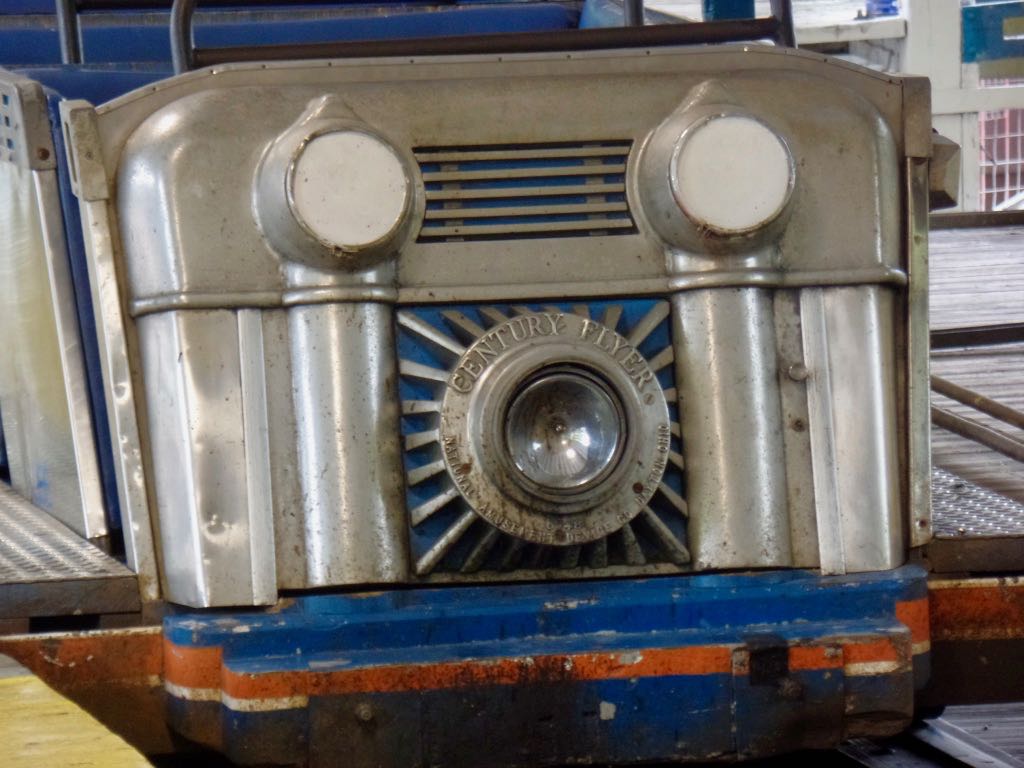 Close-up of the front of the Blue Streak train. It's a ``Century Flyer'', from National Amusement Device Company of Dayton. I believe it's the same model train as on the Thunderbolt at Kennywood. The light here might have worked at one point; the rolling motion of the wheel was supposed to generate power to drive the light. But at least at Kennywood, the rumbling around broke lights too often for that to reliably work. 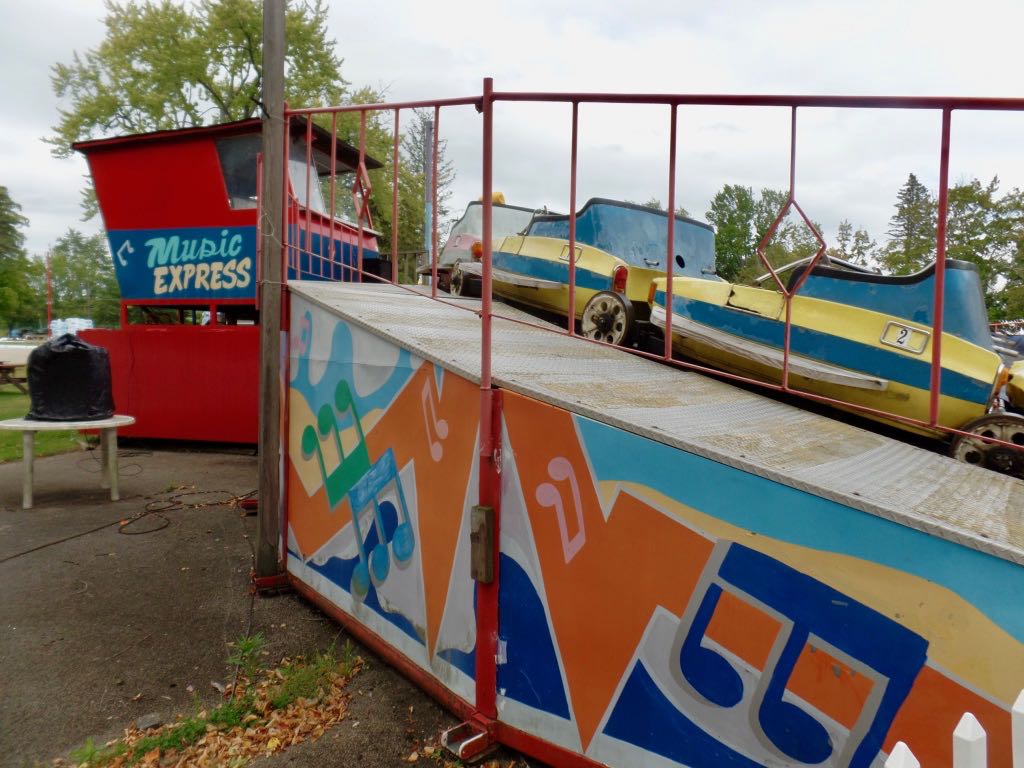 Conneaut Lake Park's Music Express, which was not running when we visited but which left us with the nagging feeling that didn't they not have the cars on the track previous visit? And did they ever have an umbrella for the ride? There's no way to tell except by looking at old pictures, alas, so we will never know. 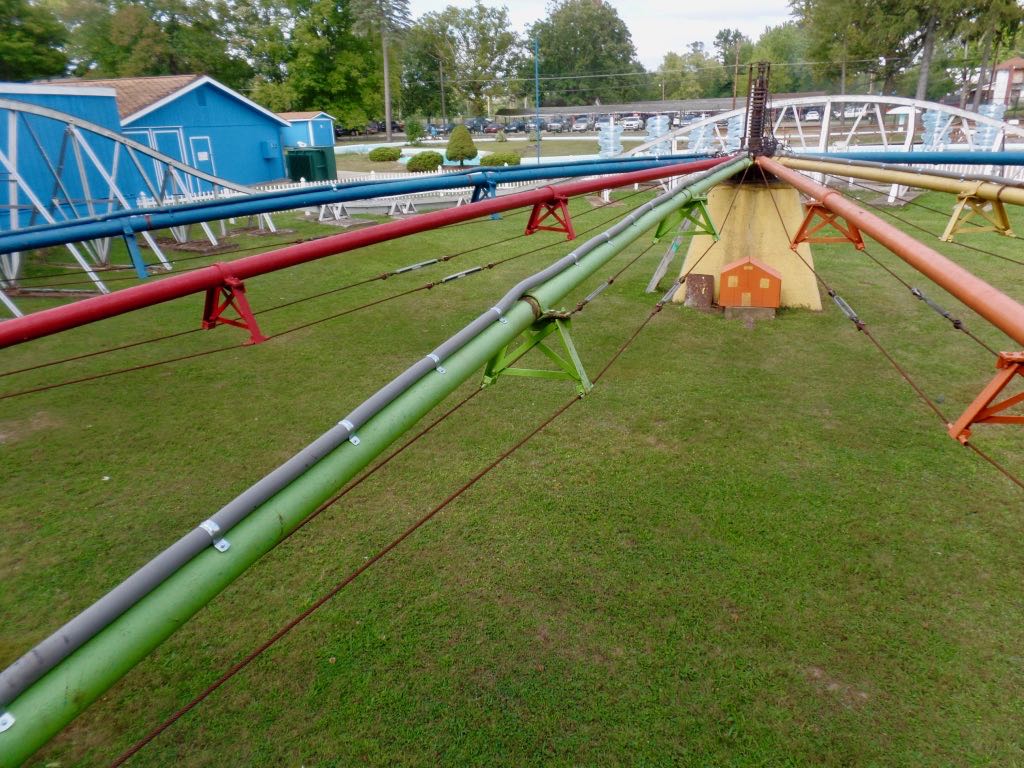 And the Tumble Bug! One of the only two Tumble Bugs still known to exist (the other is the Turtle at Kennywood). Notice some of the machinery's been put into a case painted like a tiny house here. Isn't that adorable? The coloring of the axles is pretty nice too. In the far background you can see stacks of inner tubes for the lazy-river ride.