You'll laugh and ponder on the years

OK, so, as of Saturday I was caught up with my life again. But Saturday was the Michigan State Pinball Championship. I haven't had time to write about that expedition yet. So here, have some more Conneaut Lake Park visit pictures, vintage 2017, and I'll get to narrative as soon as I can. 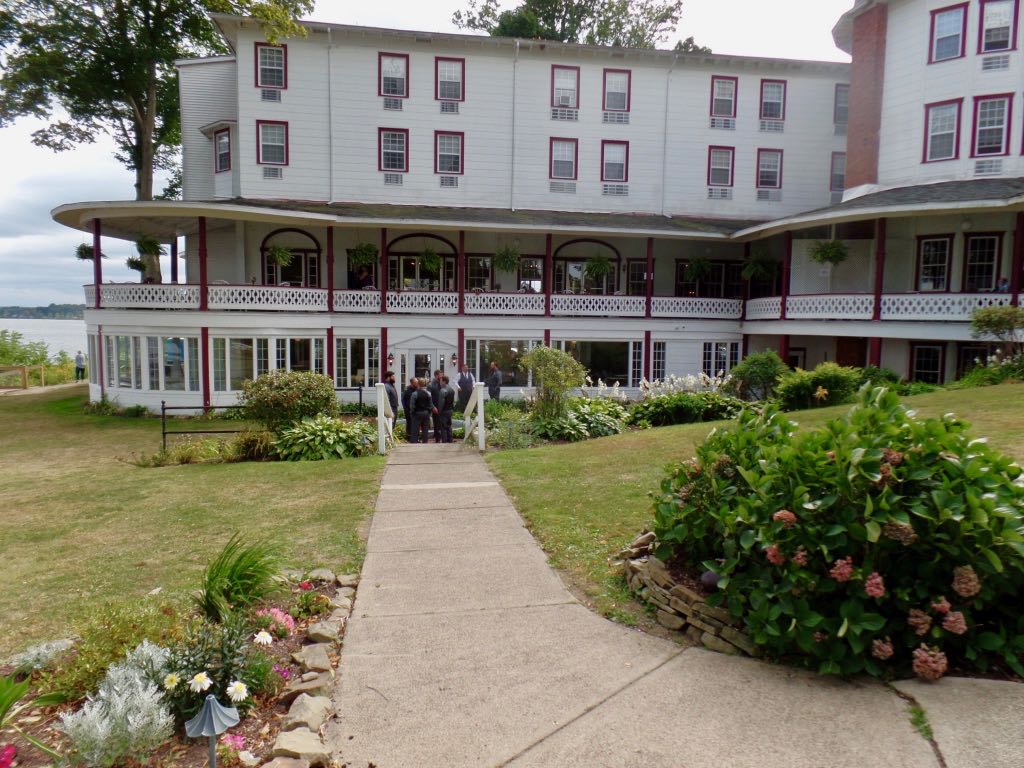 The eastern, lakeside, wing of the Hotel Conneaut. And yeah, gathered down at the end of the path looks like the menfolk from a wedding party, doesn't it look like? 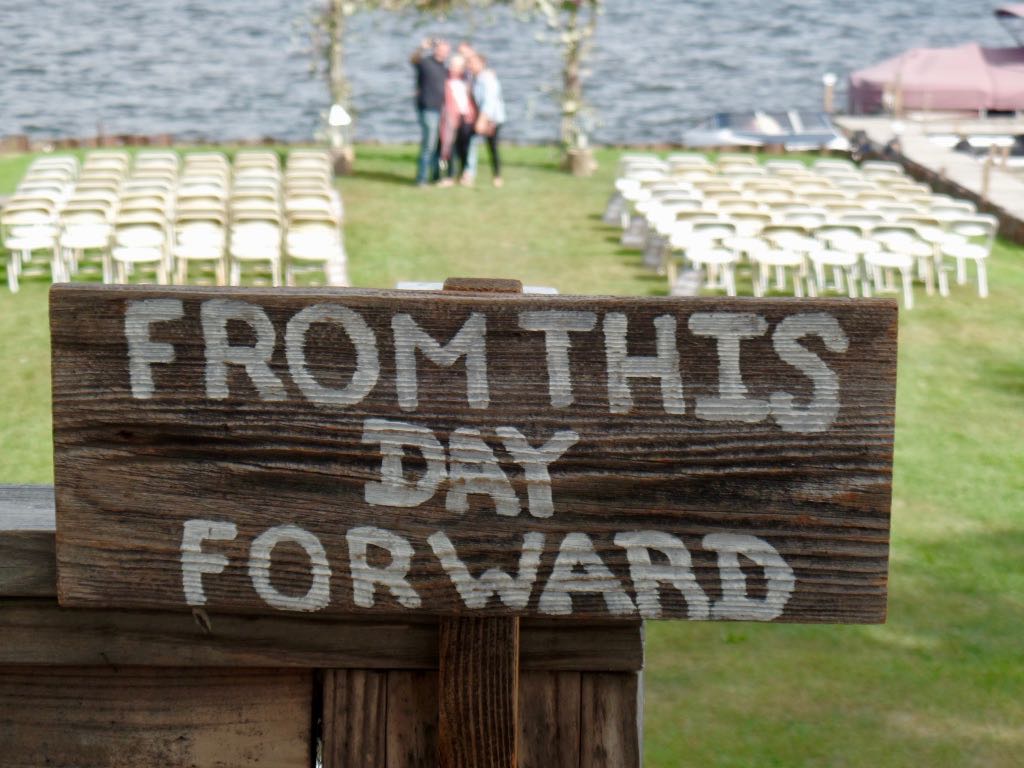 Short grassy salient set up for a wedding ceremony. Various phrases from the wedding vows --- for better or for worse, for rich or poor, et cetera --- were set up on signs like this 'from this day forward'. I really like how the close-focus and distance-blur came out this picture. If I ever go into manufacturing wedding cards this would be my picture except I'd need to explain why there's three people taking selfies in the background. 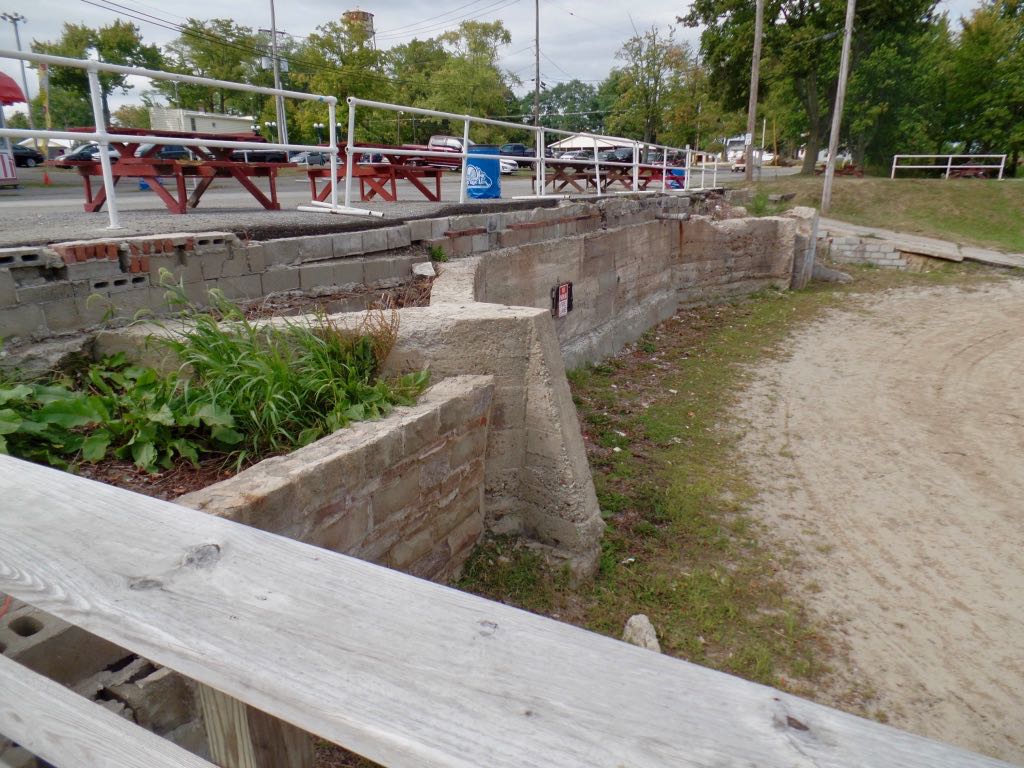 Ruined area where the beachhouse used to be; it was, in 2013, a couple weeks after we visited, the most recent of Conneaut Lake Park's structures to burn. 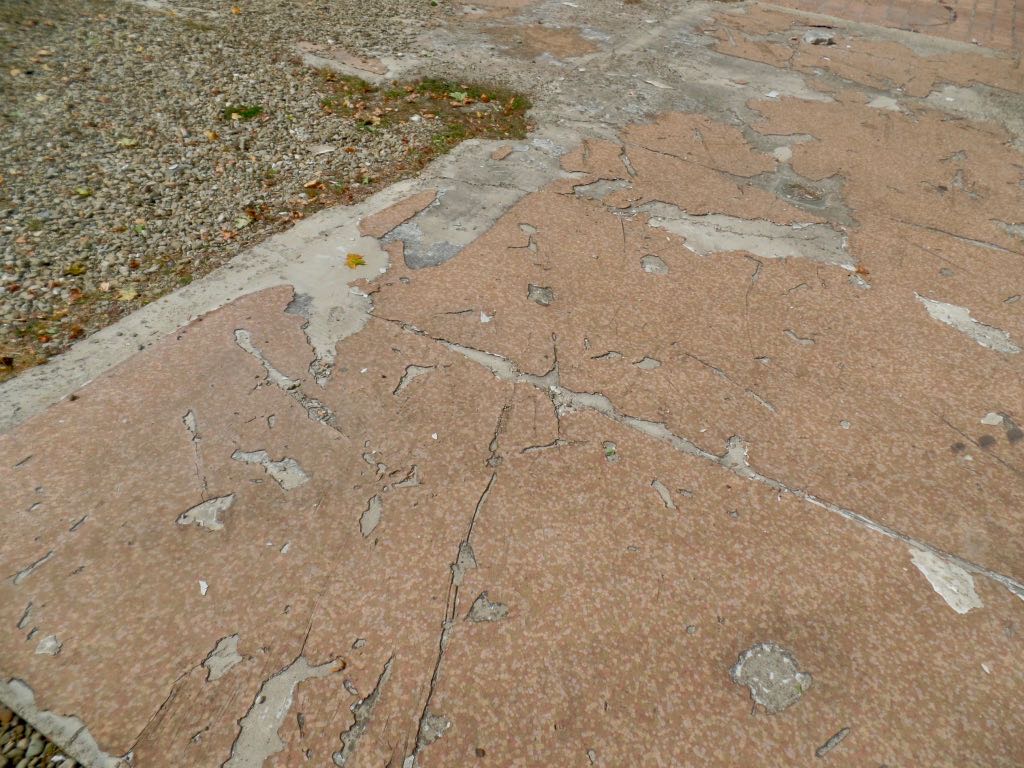 And at the risk of more ruin-porn: some of the remains of the tile floor which had been part of the Dreamland Ballroom, lost to fire in 2008. The fire also destroyed a Skee Ball stand that was slated for demolition. 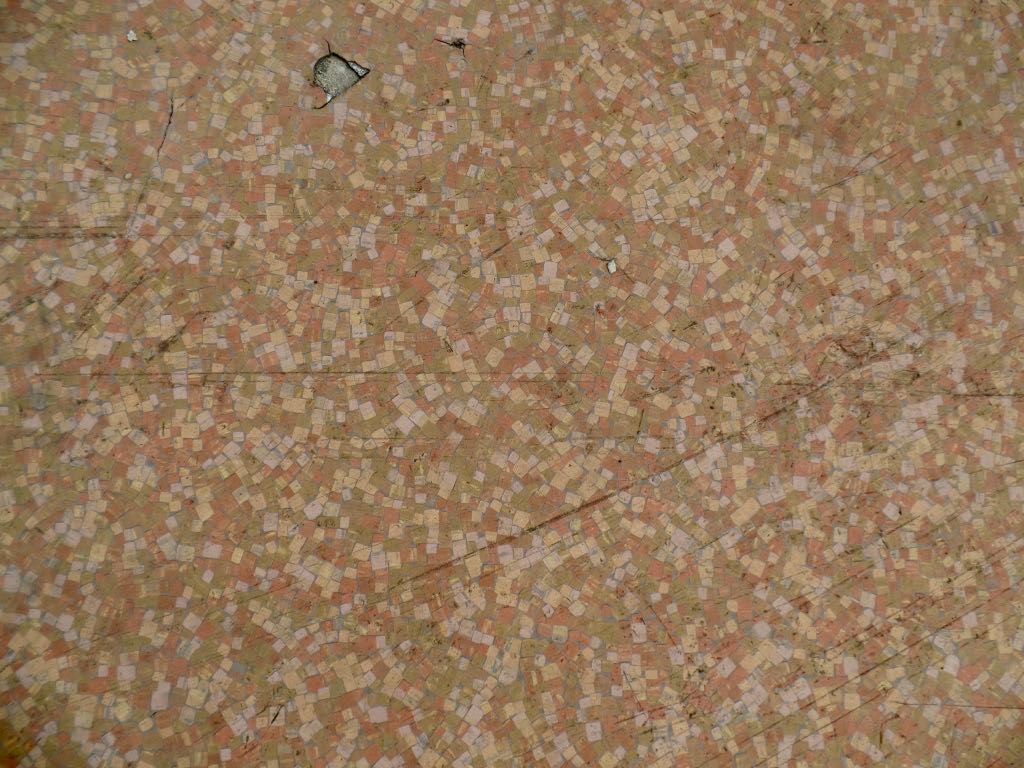 I got lost staring at the tile pattern and took a photograph to try to show just how lovely it was, even after the building housing it had been burned a decade before. 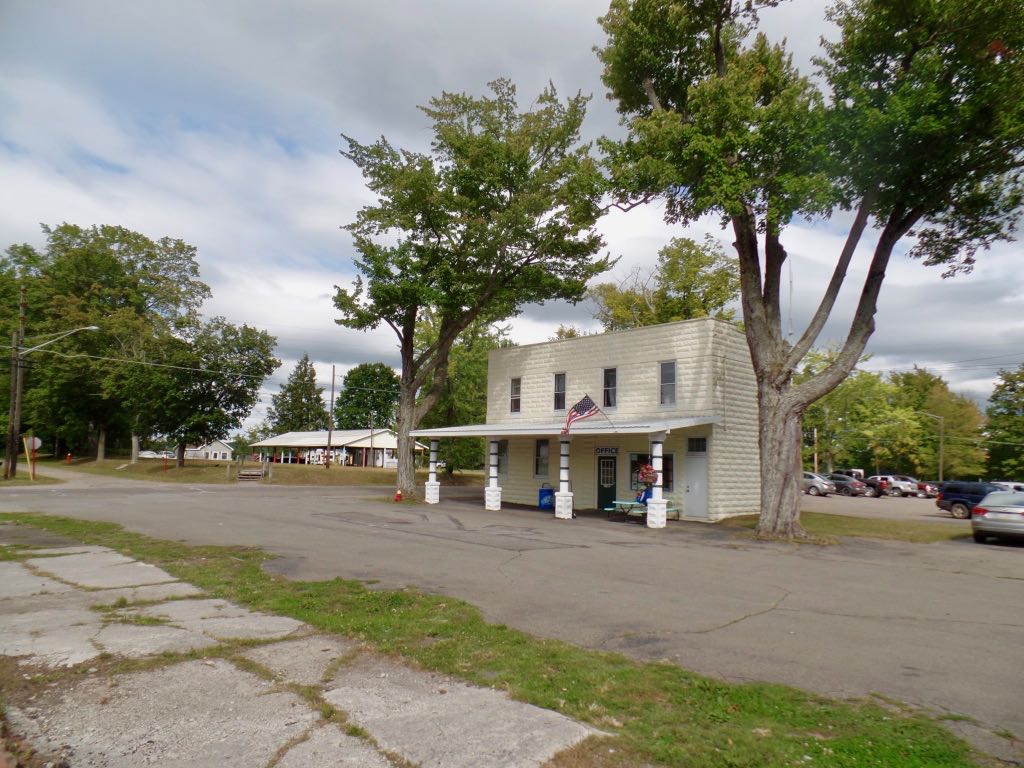 Park office building, standing off opposite what had been the Ballroom and is now just a weird isolated block in the emptiness. 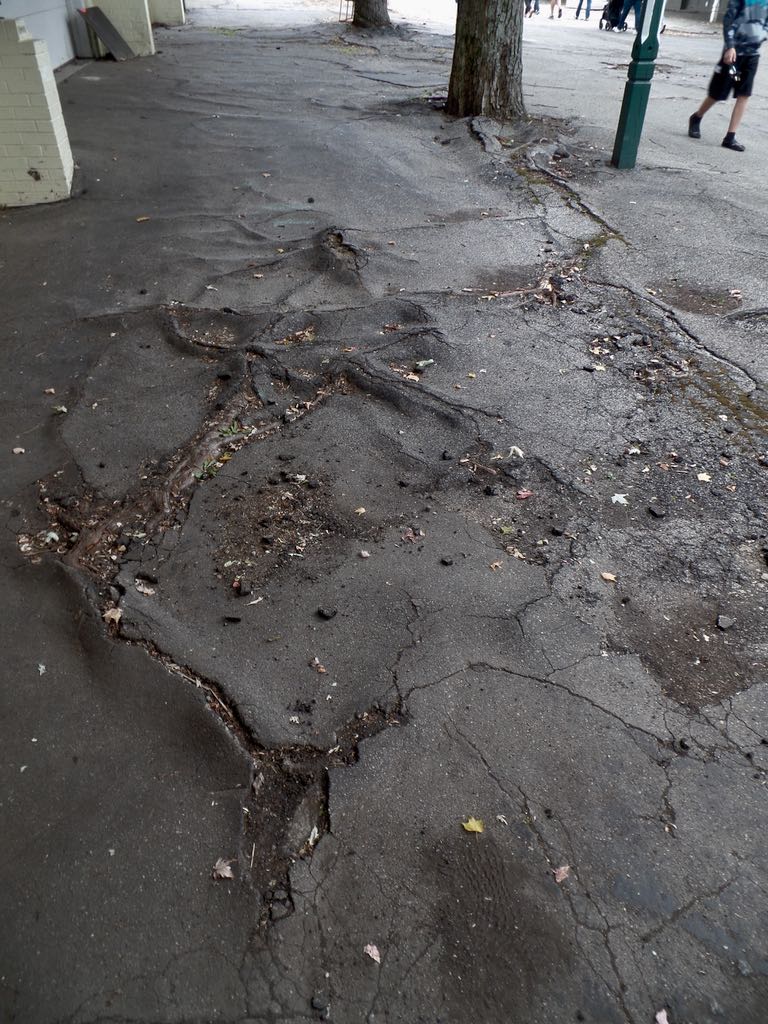 Back on the Midway, and to a tree that had made its roots turn the asphalt into this slow-moving lightning bolt. 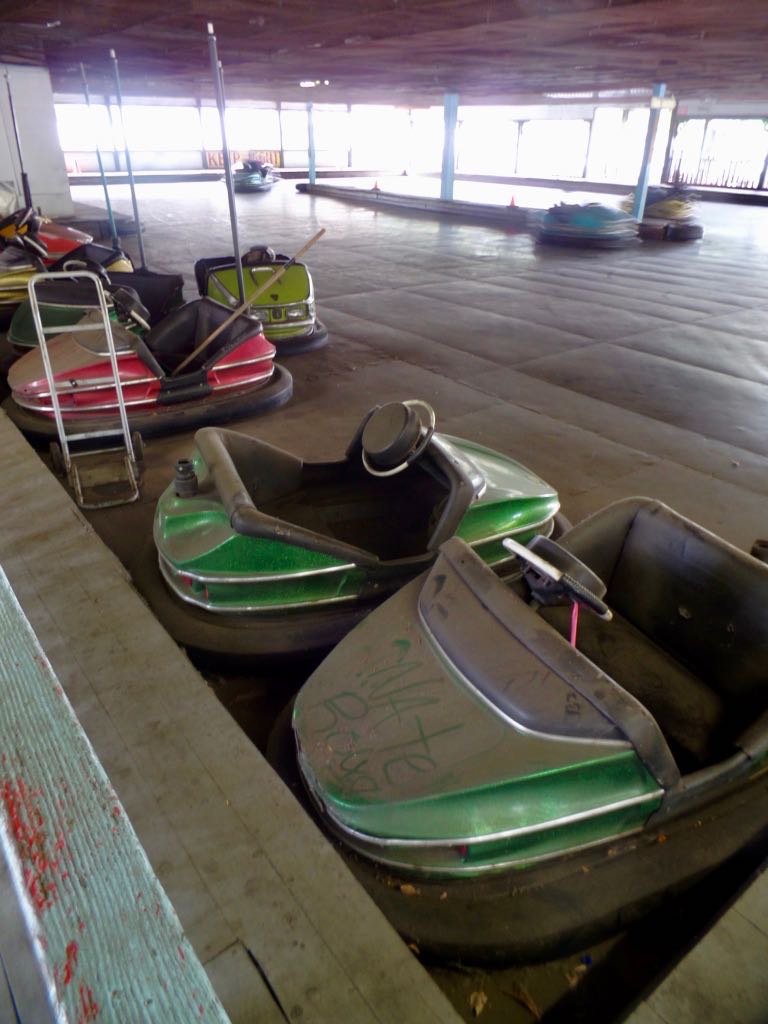 The Bumper Car ride only has four working cars, and a bunch of cars in storage hoping for better days, or to be used to keep the surviving cars working. There are few cars, yes, but they can move quickly and when you bump, you bump. 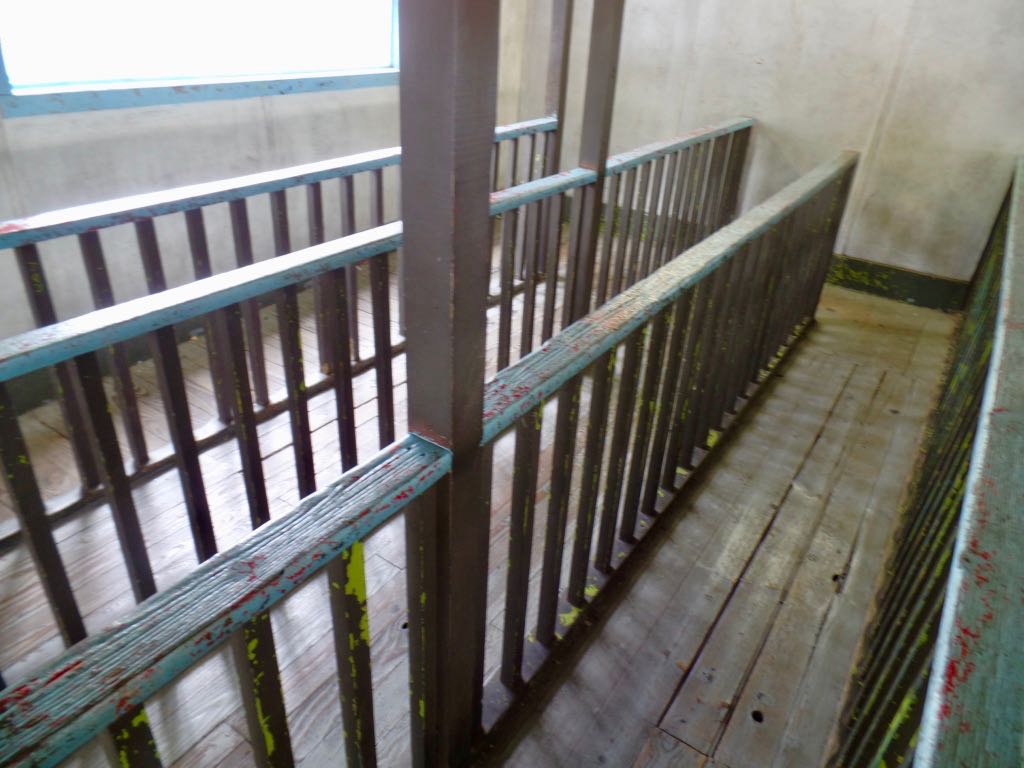 Glance back at the queue for the bumper cars, which is one of the handful of queues at the park that will sometimes get pretty full. ... Well, with only four cars to ride at once, it kind of has to get full. 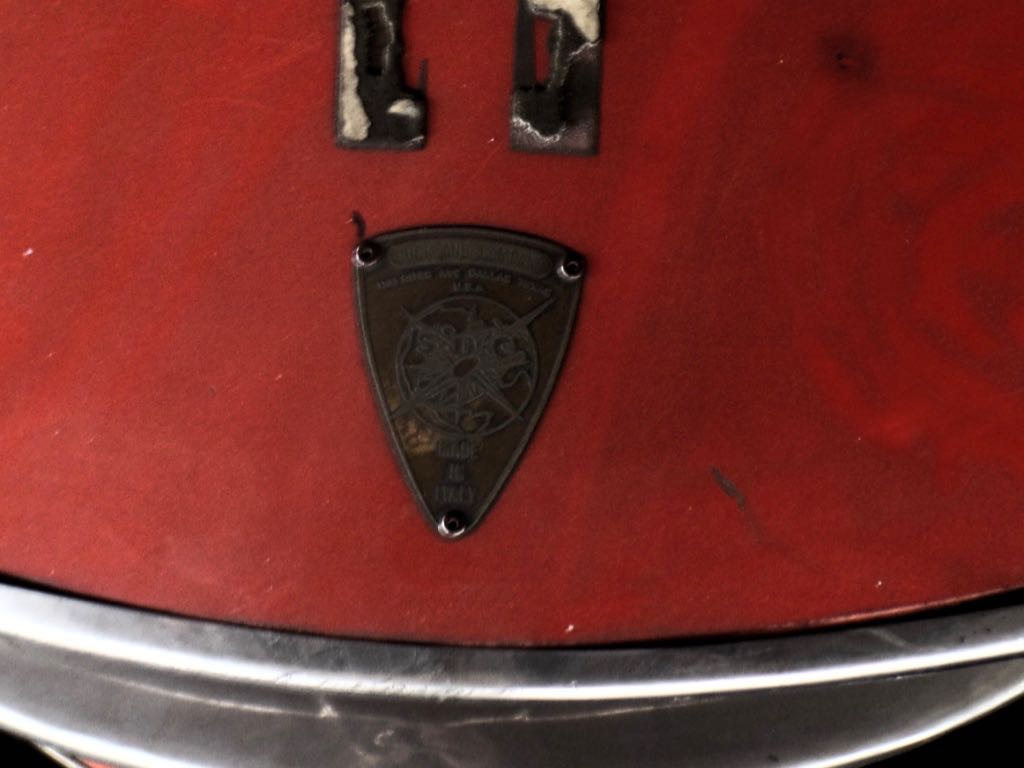 I tried taking a close-up photo of the maker's plate for the cars, but here in the light of day ... I can't make out anything but the Made In Italy. Maybe next visit I'll get it. 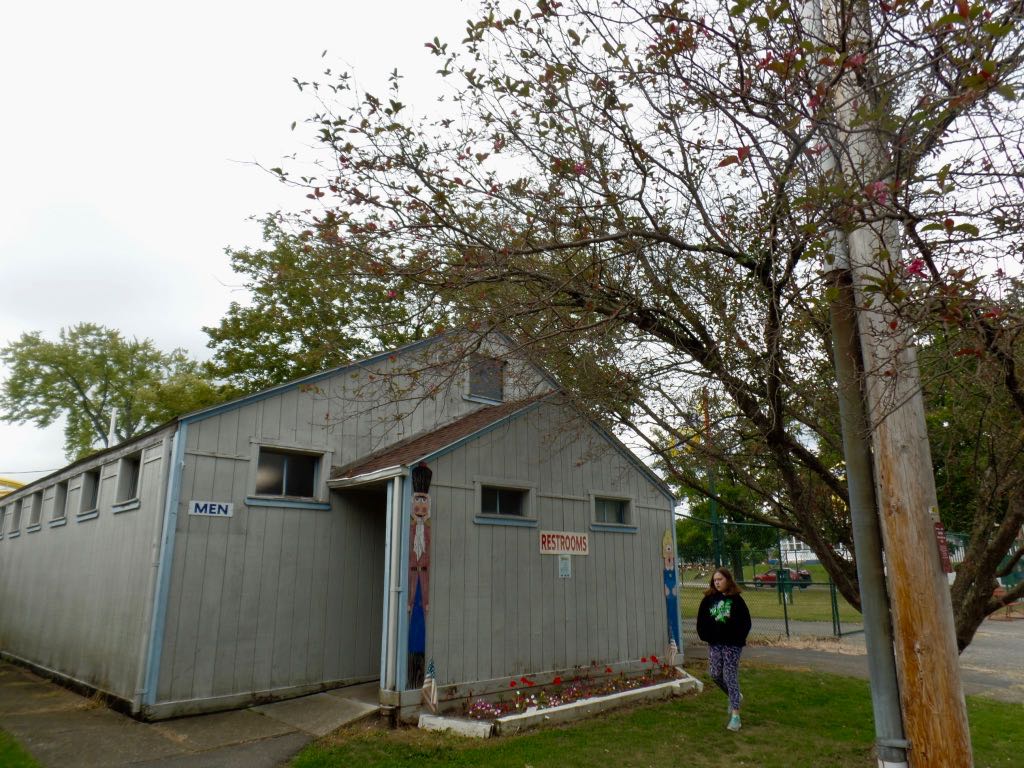 Secondary bathroom building, just north of the bumper cars, and with some odd cartoon figures denoting the men's and women's sides. 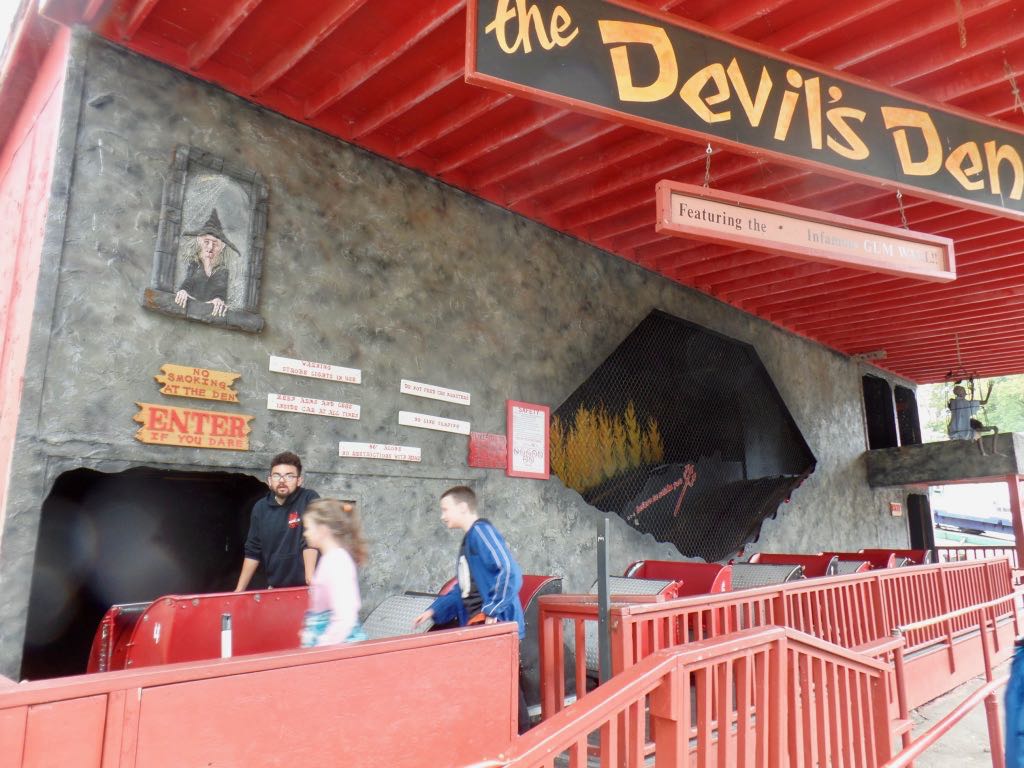 A couple getting into the Devil's Den, a dark ride with a small lift hill and drop that the Roller Coaster Database has decided to count as a roller coaster. It's a fun if small ride.

Trivia: The United States Army's ``Pershing Map'', an early 1920s list identifying strategically important roads, had nothing in southern Florida. The terrain was judged too swampy for a foreign army to invade. Source: The Big Roads: The Untold Story of the Engineers, Visionaries, and Trailblazers who Created the American Superhighways, Earl Swift.