There she goes and knows I'm dying when she says, 'Who is Johnny'?

A couple months ago a friend asked if I could drive him home from a doctor's appointment. He was going to be anesthetized for it, and they wouldn't release him without a driver. And I figured, well, sure. As long as work didn't call me out east there's almost nothing I have to be anywhere specifically for. And I get a couple weeks' warning about being called back into the office. Also work's forgotten that it is kinda good to have me in-office at least once a year. Anyway, I agreed, and then forgot, trusting our friend would remind us around the appointment time.

The North American Championship Series, the competition for the top player in about 43 of the United States, Canadian provinces, plus the District of Columbia, was set for Saturday, the 19th of January. Michigan's ended up in the small town of Fremont, which is about twenty minutes or so kind of east-ish of Muskegon, served by a web of tiny roads and not a highway in the same time zone.

bunny_hugger and I were invited, and accepted, of course. The question: do we stay in town somewhere or drive up the day of the tournament?

We reasoned: the drive to Fremont is long and through many obscure tiny roads. It's fine in good weather. It's going to be mid-January in Michigan. We should stay in a hotel. The only hotel in Fremont is small and crazy expensive. We found an AirBnB instead, a cabin on Lake Fremont. This was great. We could go up the Friday before, relax, and enjoy the pre-finals side tournament, all driving done at leisure. We agreed to split the AirBnB with our pinball bestie MWS and with BIL, of the basement tournament series. So that's all well-organized and set.

So now you know what was causing tension and frustration the days leading up to the state championship. We'd have to set out later in the afternoon than we would have preferred, since

bunny_hugger has to teach Fridays this semester. And then our friend's appointment was for 2 pm, and would take at least an hour. It's at least two hours driving to Fremont from here. This would eat up time we might spend unwinding. Might spend hanging out with friends. Might spend practicing games before finals. Might spend scouting out what our opponents were mastering and what they were shying from.

I still held out hope that the appointment would be on-time and quick and wouldn't make us too late. It was on time, but didn't go too quick. Still, our friend's appointment went great, and while he was not in condition to drive home, he was good enough to be let alone, after a side trip to a bakery I didn't know was there and that turns out to have a lot of good-looking sandwiches available. Might start getting lunches there days we don't feel like making stuff. He offered to buy something from there, as thanks. I went home with a couple of lemon bars which we'd have for breakfast the next day. Why lemon bars? Because I like lemon bars and realized I hadn't had any in ages.

Between the friend's appointment, and the stop at the bakery, and how it always takes us longer to set out than we figure, and that we hit Grand Rapids during the Grand Rapids Rush Hour (which only ate a couple of minutes, but felt like it took about eighteen hours), we got to the AirBnB about twenty minutes to seven. I had the idea that the pre-finals side tournament started at 7:00, so started to freak out in my low-key way that we were dithering around trying to figure out why the homeowner hadn't left a note with instructions and the Wi-Fi password and all that. The side tournament was set to start at 8:00. The instructions were left online, where we could have easily found them if we had Wi-Fi. MWS and BIL had already arrived --- MWS turned the thermostat up from its holding temperature of about 55 to a much more comfortable 75 --- and gone over to the tournament venue. When

bunny_hugger explained the actual tournament time, I relaxed a great deal, and took the time to go to the bathroom after all.

We were ready to begin the state championship tournament weekend.

PS: Sunday of Labor Day weekend, 2017, was a chilly and rainy day. We spent it at Waldameer Park, about an hour north of Conneaut Lake. 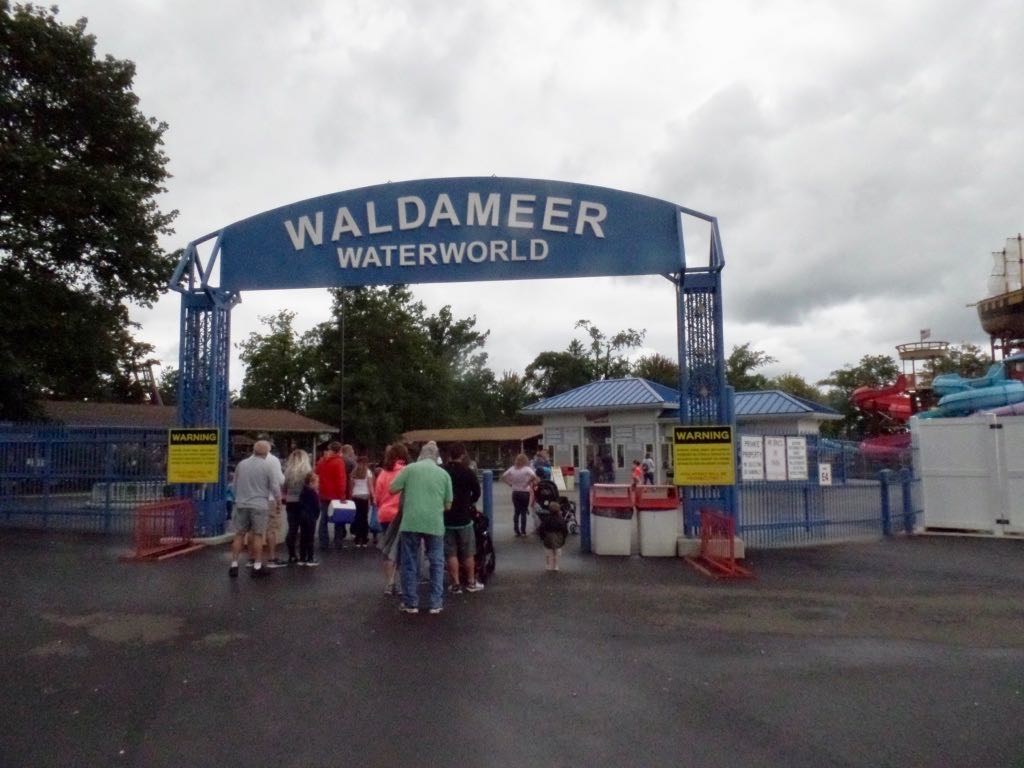 Main parking lot entrance to Waldameer Park, in Erie, Pennsylvania. One of the two amusement parks we visit that's on Lake Erie. The park has free admission; you pay per ride, either by a wristband or by a card. So it's great if you just want to wander around in a fun location like this. 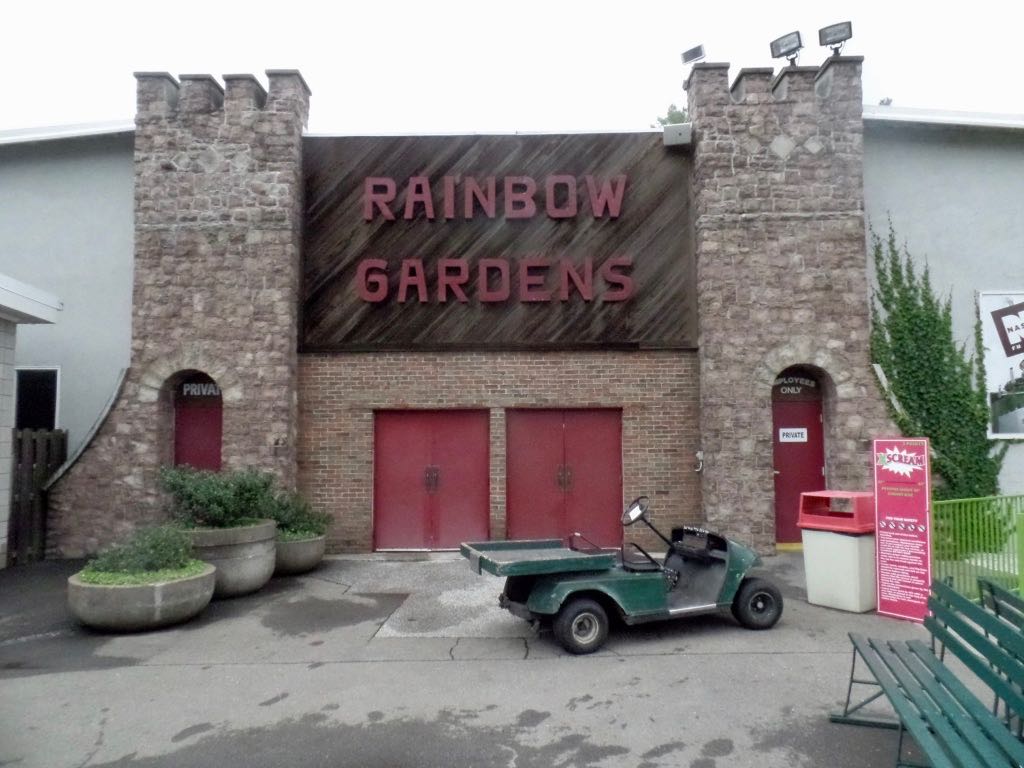 The Rainbow Gardens are one of Waldameer's oldest buildings. They were built in the 1920s, I believe, as a ballroom and are available if you need, like, space for a wedding or something. 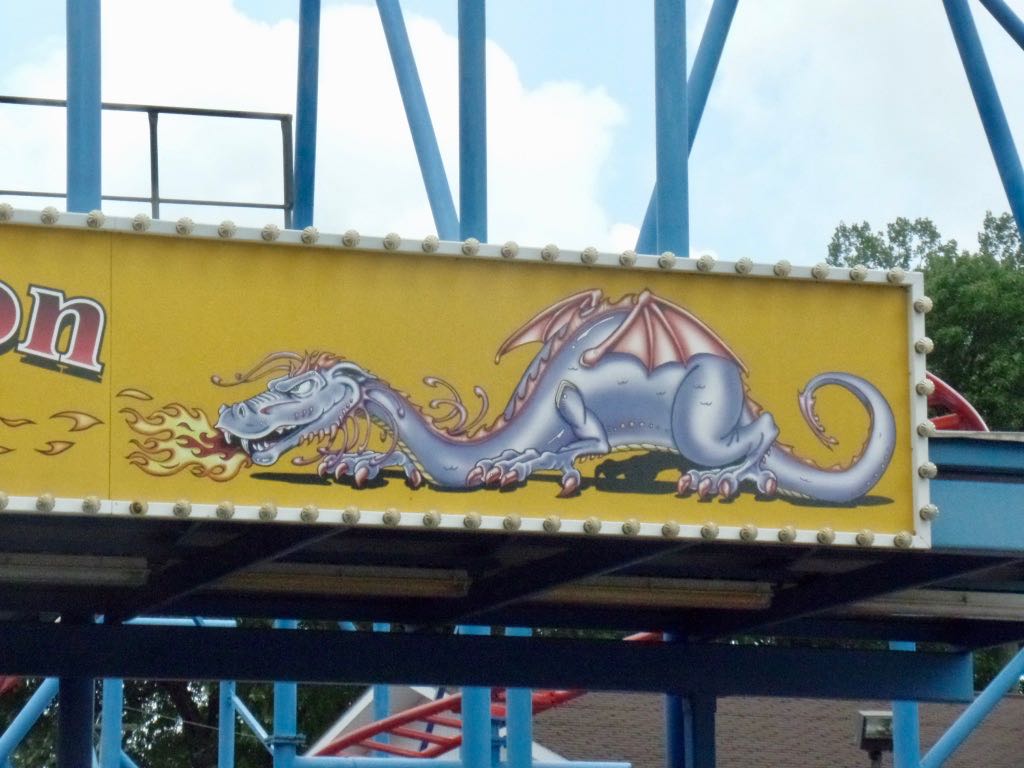