Games with names that girl is playing, all she says is 'Who is Johnny?'

The Michigan state pinball championship was held at the headquarters of Special When Lit. It's where AJH, who routes pinball and other games, operates from. It's also the back of the office of PH, the state coordinator for the International Flipper Pinball Association and AJH's father. One might suspect nepotism in the site selection process. But in an e-mail to all the championship candidates PH laid out requirements that any site would need to have and why SWL Headquarters was the best available choice for this year. Even though it is on the western end of the lower peninsula, inconveniently far for the east-side players. It's not as bad as the Central California/South California split, but it's enough to produce grumbling. Not from me and

bunny_hugger. We're central, although often grouped in with the western players. But we've also played at SWL many times; it's where the monthly and league meetings for Fremont are held. I've referred to these events as the pinball points mine; certainly, if the events didn't exist, we'd have a much harder time making it to the state championship. Mind, there are eastside events that we do miss and that are at least as good for getting to the state championship. You have to play what fits your style.

SWL was open the night before the state championship, as it was the several weekends before. It gave people the chance to practice the games and get to know the venue. And AJH and PH being skilled as they are in organizing events for IFPA credit, they set up weekly tournaments. The one for that Friday was pin-golf. The point of pin-golf is to play a course of tables, not to beat other players, but to beat the machine by making some objective. The fewer balls you need for an objective, the better your score. The side tournament pin-golf objectives were boring, all about setting scores. I more enjoy the objectives being getting the game to a particular state, like starting a four-ball multiball or something. But a score objective allows for partial credit if you don't meet the goal, and that keeps everybody from ending the course in a gigantic tie for last place.

bunny_hugger and I went up the week before finals and put in two rounds. We both had lousy first rounds, partly because the score objectives were incredibly high. Like, four billion points for Johnny Mnemonic. Our usual game is about one billion points, and our usual ``we're on fire'' game is two billion.

bunny_hugger had once ever beaten four billion points. I never had. We wouldn't that time either. We tried another round. I did a fair bit better.

bunny_hugger did much better --- meeting objectives on two holes and finishing with 54 ``strokes'' --- but neither of us thought we'd get into the eight-person playoffs. We had hoped to get to the venue early enough last Friday to put in another round. But I pointed out when we were getting tense over how late we were setting out, we never make finals in a pin-golf tournament, so why worry about not getting one more chance to not make it?

But we got that chance. We had an hour before the close of qualifying for the tournament. Many of the games were electromechanicals or solid-state games with short playtimes. (You can usually play a pin-golf course in any order.) I jumped in on my old electromechanical friend 4 Square and met its enormously high objective (5,500 points), on the last ball. It was a great start, for me at least. And the close of the tournament got delayed a couple times so people could finish their rounds, or get close to it. This last-shot entry went all right --- not as good as the earlier round --- for

bunny_hugger. And went great for me. I didn't make any other objectives after 4 Square. But neither did I bottom out on any tables. I got partial credit for all the ``holes''. I was even having a really solid game on the last table I played, Aerosmith, a game that's always been infuriating because the table looks like it should be easier than it actually is. I was seconds away from meeting the objective when it turned out the game was touchy, and tilted. The bonus would probably have shaved a point off my score. I was tied for eighth place, with TG.

I was readying for a playoff when AJH explained that there wouldn't be. All ties were in the playoffs too. Which was good news. Playoffs would be several rounds of groups playing one another, earning points based on the order of finish. Had there been eight finalists it would have been two groups of four players, with the two highest-placed finishers going to a final round. With nine, we'd play three rounds. The first two rounds would have groups of three players, with the two highest-placed finishers moving on. So my final round made life a bit easier for

bunny_hugger, fifth place finisher. It's easier to move on from a three-player than a four-player group. (We know this well; SWL tournaments often run by these rules.)

And the groups worked out well. I breezed through my first round, managing that happy state of having secured my place after only three of the four games of the round.

bunny_hugger passed through also, and easily. In the second round

bunny_hugger got knocked out; she would finish the pre-championship tournament tied for fifth place with MWS. But I got through, myself, and placed into finals.

bunny_hugger left a while, to get some Taco Bell from one of the few fast-food places around and open at that hour.

By the time she got back, I had enjoyed a triumphant first-place finish on the first game of the finals. Then a last-place. Then another last-place. And then one more last-place finish. Astoundingly, this did not put me in fourth place for the round. The way points are distributed for your places, I ended up tied for third place. With TG, once again. Still, it was a good feeling to enjoy going into the state championship for the next day. Winning the pre-SCS pin-golf tournament was AJH, always a safe bet. Second place was JEK, who was slated to play

bunny_hugger in the first round the next day. Hm.

When we felt like we'd played enough for the night --- and I realized afterwards that I had touched nothing except for pin-golf qualifying and finals, supporting the superstition that you often play your best games cold --- we set back for our AirBnB. By then it was snowing. A major snowstorm was supposed to hit Michigan over Friday night into Saturday. The logic of going up the day before was impeccable. In Fremont last Friday night it was snowing, not blindingly, but the kind that you know heralds a snow day the next morning. The roads to the cabin were small and twisty and

bunny_hugger was not happy with the directions as I gave them. The experience driving two miles left us so very glad we were not trying to drive two hours.

At the cabin we talked a while with MWS and BIL, some about the pin-golf tournament. Some about handicapping the finals the next day. Some guesses about who would and wouldn't show up. Some gossip about the people who had said definitely they would not show up. Some talk about the politics of Michigan competitive pinball. And settling the important thing: what time did we all want to get up, and when did we want to head over? Happily we all had about the same idea for when to head out, and nobody was going to have to get up riotously early. All very good stuff for the eve of the big tournament.

Currently Reading: Popeye: An Illustrated Cultural History, Fred M Grandinetti. It so happens the first Thimble Theatre strips printed in the book, as demonstration of the character's origins, are from the storyline currently running in Comics Kingdom's Vintage, a storyline about Popeye as the ruler of Spinachovina. (The storyline really isn't making Popeye look good at all and I'm kind of hoping it wraps up soon and we can get on to something better.) 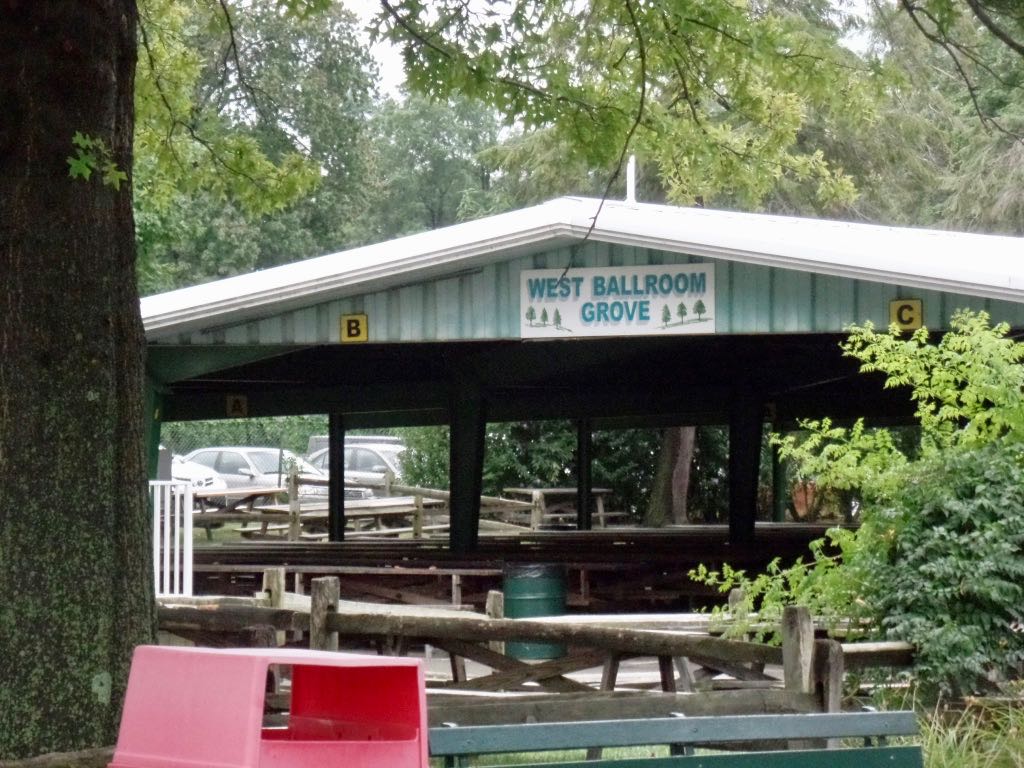 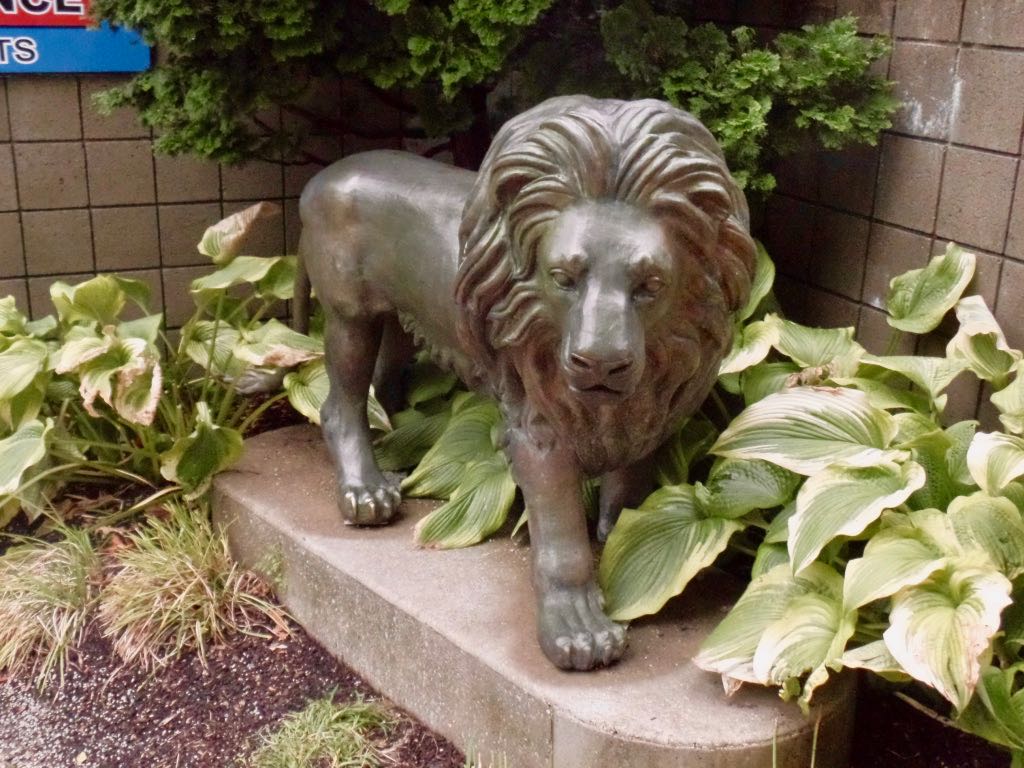 Lion statue guarding one of the bathrooms at Waldameer. It's a great park for decoration and scenery. 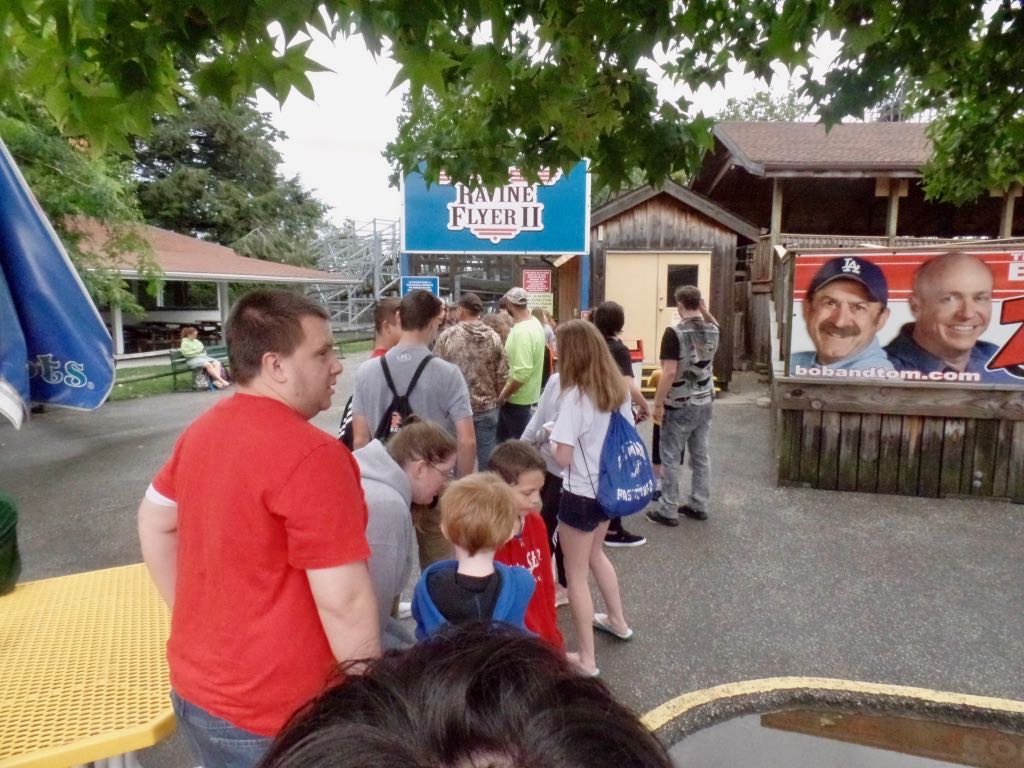