I tried to understand because I'm people too

The Saturday before state finals we went to the Special When Lit-hosted little tournament, and practice session, and all that. While there

bunny_hugger mentioned to AJH how she was looking forward to the fun of the championship. AJH asked: ``Really? Why?''

AJH predicted the night before, the pin-golf side tournament, would be fun. A lot of people would be there, it'd be casual, it'd be hanging out, no trouble. But the tournament day itself? There'd be stakes. Everyone gets stressed. The slips and casual mistakes that always happen become things to argue. And this year should be worse. There's finally money in the state championships. The International Flipper Pinball Association began charging a dollar per event per player, this excise used to reward the state's championship players. All 24 of us would take home something, but the people who finished higher would take home more; there were several thousand dollars available, if you can win sixteen games of pinball in one day. PH would have to make the call on any game issues or player errors or anything. AJH is is son, and the venue host.

And, going in, one of the top candidates for person who might win it all. And there's the eastside-versus-westside thing. The leading advocate for the ``there's-something-fishy-about-SWL-tournaments'' thing would not be there, as he'd turned down his invitation. But a bunch of the people he spoke with regularly would be. AJH was not optimistic about the emotional tone of finals day.

So some background material about pinball technology and gameplay. Multiball's probably the distinctive feature of modern, as in post-1980, pinball games. The earliest multiball schemes locked balls, physically, in some place, to hold for release. In solid-state games, then, this allows for ``lock stealing''. This is in multiplayer games. One player locks balls, but the other one releases them, getting the benefit of multiball without doing all the work of readying it. The machine allows it. The IFPA allows it, in their default rules set, the reasoning being that if the first player didn't want the second to steal their locks, they shouldn't have left locks around to be stolen. Work on your skills.

(Here I mention one of the high-water marks for me as a bloodthirsty pinball competitor. At SWL events I'd leave a ball locked on Taxi, because on their table it's very easy to go from ``released multiball'' to ``oh, lost both balls''. So I'd leave it as a trap for competitors. It wouldn't get AJH --- he could manage the multiball release --- but other players? Sure. Taxi was at the venue again, and one of the games for finals. But they rebuilt the flippers, so it's not so dangerous to actually get multiball done usefully. So I have to retire that strategy.)

Later games were wise to that trick. By the 90s a game would keep track of how many balls each player had locked, and wouldn't give you a multiball unless you'd earned it. But you could still get ``lock spoiling''. This is where one player has several balls locked and ready to go for multiball. But the other player gets multiball going, and the balls are released from their locked positions. And then there's no balls left in the lock when it's the first player's turn again. What happens? In nearly all games since the mid-90s, the machine can automatically launch a ball into play, from the plunger lange. So the player can do whatever should start multiball, and get their multiball, albeit with one or more balls launched a different way than ``should''.

But there are games that don't have automatic launch mechanisms. The other player released the locked balls; the first player has no option but to go locking them again, starting from scratch. Thus, lock-spoiling. All that work done was lost, and all the IFPA will say is, if you don't want your locks spoiled, don't leave locks around to be stolen. Still, most any game made this century is immune to lock-stealing and lock-spoiling.

Something circling this happened in the pin-golf tournament the night before finals. JIM, I think (it doesn't matter if it wasn't), locked two balls toward the normal, three-ball multiball on late-solid-state game Whirlwind. Then PH started the game's other, two-ball Quick Multiball. The game kicked out both of the already-locked balls, so that he had three balls going --- and the game was set to score both the jackpots for Quick Multiball and for Regular Multiball. When he noticed this he stopped, trapping the balls and calling for a ruling. IFPA rules have many subtleties that open themselves to Talmudic interpretation, as any interesting rule set does. But generally, you're not supposed to take advantage of loopholes. If you get one ball stuck during multiball, for example, you're supposed to try knocking it free rather than play a less-difficult game at full scoring. Was this taking advantage?

AJH was running the side tournament. But since the matter involved his father, he called over BIL. BIL would also be the backup tournament official for finals, specifically to talk out and approve any ruling involving AJH or PH. He runs tournaments regularly, and one of the two major Michigan leagues that

bunny_hugger and I haven't been to yet (its schedule is just inconvenient for us during the school year). Launching balls from the only locking point on the game seemed to be as the game was designed. And I had the Pinball Arcade app on my iPod Touch; it said that yes, if you had two balls locked and got Quick Multiball going, then you got scoring for both multiball modes at once. So the question was, was this fair for PH to score on? BIL ruled that yes, this was fair; lock-stealing is all right, and the double-multiball-scoring was as designed, so, play on. Good to have a weird ruling case involving PH or AJH the night before, so they could test out the decision-making process. And to learn of a weird rules condition nobody had noticed before.

No hard feelings. But then, this was the pin-golf side tournament. Nothing at stake here but IFPA points. They might matter in the race for a position in the 2020 Finals. But there'll be a hundred or more events the rest of 2019. What would happen when the ruling might affect who gets hundreds of dollars?

One big, but ultimately disappointing, game of 2017 was Stern's Aerosmith. It was the first to have an LCD screen rather than dot-matrix scoreboard. I want to like it more, since it's got some interesting stuff, including a weird shot to lock a ball. And it's got a neat gimmick for the main, Toy Box Multiball. You the player are allowed to make a choice about whether to have a three, four, five, or six-ball Toy Box Multiball. You have to make the choice whether to take the risk of having to ready and lock more balls, versus the reward of having each shot worth more points. And the Toy Box is a fun gimmick: a ball get launched into the air into a Toy Box, and the ball comes to rest in one of six slots, and when multiball starts the plate holding these slots rises up and the balls shower out.

bunny_hugger got to thinking something about Aerosmith. It physically locks up to five balls in the Toy Box. What happens if player one has got, say, five balls locked in there? And player two starts a three-ball Toy Box Multiball? There's no mechanism in place that would let the Toy Box release only three balls, rather than the six that would drop out. The game can be set to avoid this, by being put on ``virtual locks''. In this the game counts how many balls are locked, but never puts them in physical reserve; multiball's just auto-launched. SWL had not set virtual locks on the game, though. Could you get a six-ball multiball for doing three-ball's worth of work?

She developed this theory while we were putting in our final pin-golf qualifying round. During the pin-golf finals I realized I had the chance to try it. The other player had locked four balls; I was ready to start a three-ball multiball. So I went for it. For the effort of three locks, I got five balls into play.

If I follow the line of action right, the game knew what I was doing. I scored jackpots appropriate to a three-ball multiball, even while I had more than three balls in play. And the ball save, which compensates for a launched ball draining right away (normal in any modern multiball game), didn't turn on until I had lost two balls, that is, when I wasn't playing with more balls than I ought to have had. But is it worth it? Ooh, certainly.

I don't know what to call this. It's not exactly lock-stealing, since the other player was still up for the five-ball multiball he'd earned, or the six-ball multiball he might have gotten. It's certainly not lock-spoiling. Lock-poaching seems to get at it, except that the other player isn't harmed, except by the value I've gotten out of it. Maybe lock-embezzling, if we accept the idea that the victim of embezzlement in a sense doesn't lose anything until the moment the embezzlement is discovered.

bunny_hugger's discovery in mind on Saturday, though.

Trivia: French writer François Moigno estimated the French electric telegraph network as stretching about 750 miles in 1852. Source: The Victorian Internet: The Remarkable Story of the Telegraph and the Nineteenth Century's Online Pioneers, Tom Standage. (Moigno complained how this damaged the optical telegraph network.)

Currently Reading: Popeye: An Illustrated Cultural History, Fred M Grandinetti. I mean, I want to be enthusiastic about this book, because Grandinetti clearly dug up a lot of fascinating bits of trivia. But the writing is too often heaps of stuff piled together, like a Wikipedia page that's had a few generations of writers adding half-sentences. And there's weirds tuff like him writing as if of course you understand the whole Bluto/Brutus kerfluffle. Which, maybe someone who'd read a book that lists all the Popeye record album releases of the 1970s would, but it seems like a paragraph could be put in that lays out just what happened and why.

PS: Waldameer's a lovely place. Let me continue to make this argument. 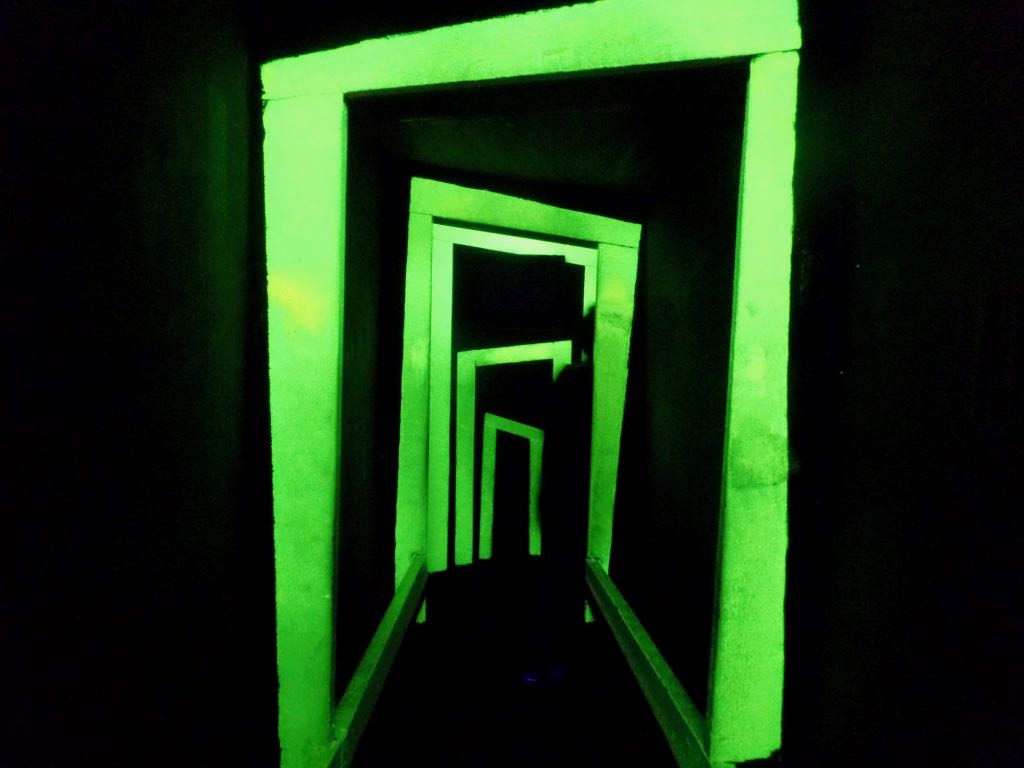 Hallway within the Pirates Cove, one of the two Bill Tracey-designed dark rides that Waldameer has. This is one you just walk through, so I felt it safe to take photographs that didn't turn out. 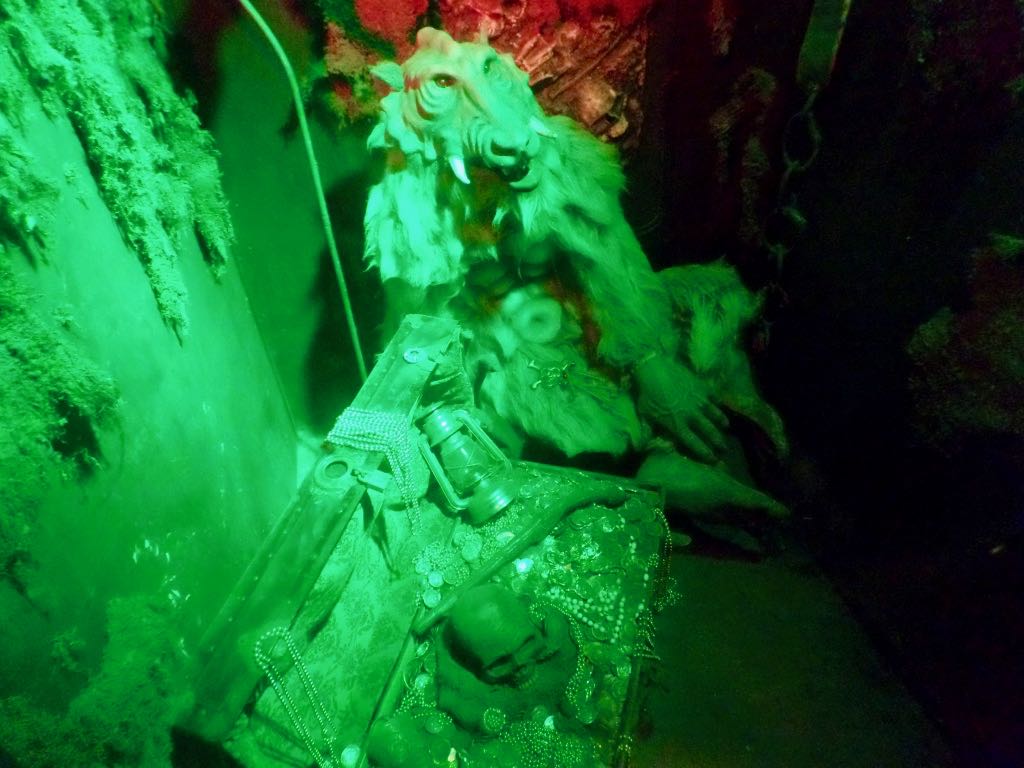 Within the Pirates Cove are a lot of little scenes to look at, such as this pirate's treasure guarded by some kind of monster. 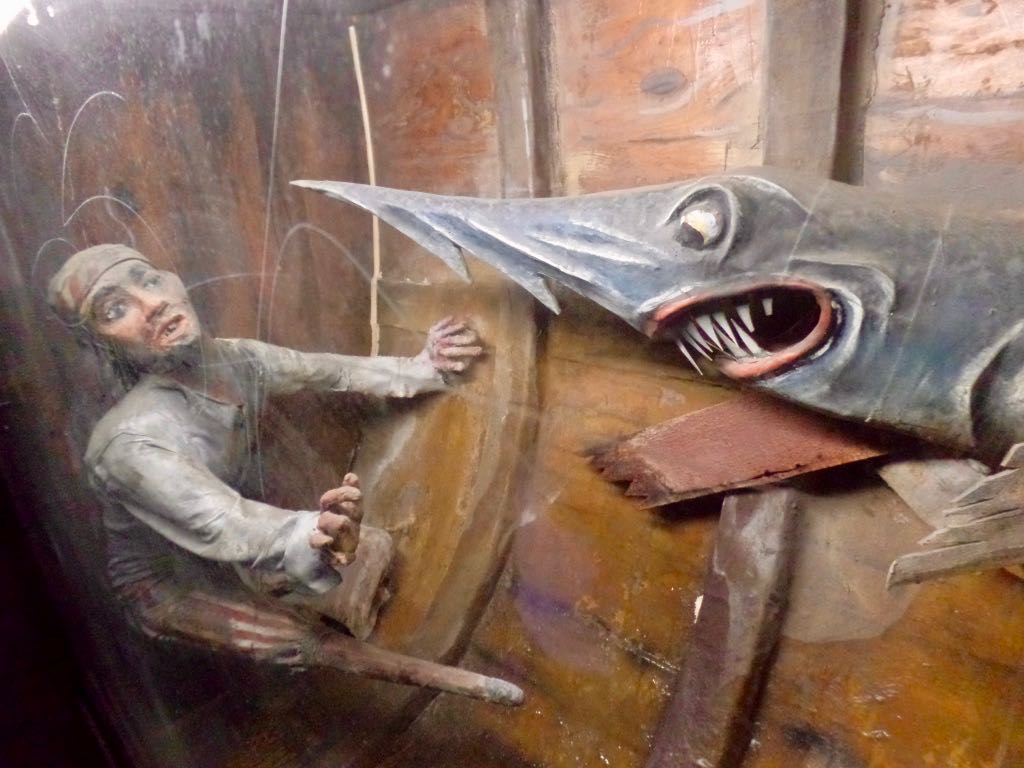 Bit of a gruesome scene with a swordfish-or-shark breaking through the ship's hold to get at some sailor who's been having a bad run of it lately.