My heart's in overdrive, it's great to be alive

bunny_hugger and I had lost our first rounds, and so would not be the Michigan state pinball champions this year. BIL lost his, too. MWS, who had a first-round bye, had yet to play. DAD, who'd beaten me, went on to play AJH, who was many people's bet to win it all. JEK, who'd beaten

bunny_hugger, startled me by beating JMA. But he was finally beaten by MWS.

We had something to do, though. The tournament was playing out all the brackets, so that all 24 competitors would finish in some logical order. We couldn't take first place, or even top sixteen. But we could still get 17th place. Or 20th. 22nd. 24th. These loser-bracket, or consolation-bracket, rounds would be best-of-three, rather than best-of-seven. But they'd run by the same pattern as the best-of-seven winners-bracket tournaments. The person who started with the higher seed would get the pick of game or order, first game; after that, the loser got the pick.

My first opponent, and chance to get into the top of the bottom eight: EJO. I feel good about my chances here. I start on 4 Square, trusting I wouldn't have the same kind of mediocre game I just had on it. I am mistaken, putting up 2,660 points. He has 3,108 by the time the last ball finishes its business. I have the next pick, and go for Eight Ball, for the same reasons I did against DAD. EJO puts up a much better game, getting 147,970 on it. But I had an even better game yet, with a first ball that just happily would not end, and a second ball that kept to that: I'm at 308,660. EJO picks the last game, Aerosmith. EJO has a really good second ball, and is making progress towards another big Toy Box Multiball on his third ball, finishing at 91 and a half million points. I've got a big gap to cover. But I've been very lucky this weekend at finding the ``secret'' skill shot, a plunge just soft enough that a ball rolls into the ball-lock. And while I only have a three-ball Toy Box ready to go, he's left four balls in the machine. I can poach his balls, and start a very nice run. It's not enough: I end at about 54 million points. This doesn't sound close. But if I had managed to combine a playfield multipler you can get in multiball with the super-jackpot I'd have taken the lead. I just wasn't able to.

Well. My chance to be at the top of the bottom four, then. I'm to play RHY, one of the Fremont tournament regulars. I've had enough of 4 Square, and jump straight to Eight Ball. And here, finally, I had my moment: my first lousy game of Eight Ball all weekend. I got two house balls, all I could do was get 35,070. I'd had larger bonuses my previous games. RHY puts up 46,900 and I have to think what to do next. I pick Firepower, the early-solid-state game. It's new to the SWL venue, so RHY can't have had much more time on it than I have. And I like the game, which matters. If you can hold your nerve when shooting at some center targets you can build up hundreds of thousands of points. RHY does that, for example, collecting 260,350. I do not, getting 67,620 instead. I'm knocked down again.

bunny_hugger meanwhile has also had a rough time of it. In her first loser-bracket round she faced ADM, past state champion and what the heck is ADM doing in the loser-bracket? He lost his first round to JEK, somehow. Well, ADM beat

bunny_hugger, but she did make him work for it, particularly with her spectacular game of Congo. She then faced JCS, one of the eastside players we have a little familiarity with. She beat him, too, two games to nothing. She would finish the tournament ahead of me. Her last opponent, rising up, would be RHY. She beats him, too, and finishes the state championship in 21st place. She had been 20th-seed going in, although that's with people ahead of her who declined to play; she had been the 25th-highest ranked player in the state, so, she can claim to have at least held her position.

And my opponent for the final round? JCS, just beaten by

bunny_hugger. I have pick of game-or-order, and go for game. And then, finally, I think. I know, from long experience, that I have a relative advantage on older games. I like them. Many competitive players don't, or at least don't go seeking out chances to play them. Modern games typically have deep rule sets that let you combine shots to outrageous reward, such as that hundred-million-point shot JEK played against

bunny_hugger on The Walking Dead.

But I haven't been playing them well today. I have been playing the modern games well, though. And yes, it's easier for anyone to have a great game on a modern pinball table, because they have rules designed to help a good game snowball into a great one. That applies to me, too. I pass on 4 Square, Eight Ball, and the other tables that I apparently don't have today, and look for a modern game.

I pick Aerosmith. The game was briefly everywhere in early 2017, then disappeared as its flaws --- particularly, how hard it was to get a string of good shots in order, so that too many ball drains felt unfair --- disappointed players. It came back to the SWL venue for state finals. Nobody's had a lot of time on it. But I've had mostly good games on it. And I roughly know how to get the ``secret'' skill shot (there isn't an ``ordinary'' skill shot), and I know about the lock-poaching thing. I can work with this.

My choice is sound. I have three decent balls, including one poaching four balls from JCS, and finish at 93-and-a-half million points. JCS puts together a bit over 13 million. It's my first win in two rounds. It's a lesson I need to remember. I may have general guidelines. I need to be quicker to pay attention to when the general pattern isn't working. Situational awareness.

JCS picks Jurassic Park. It's a good, strategic choice. Jurassic Park is a mid-90s Data East game; that kind of game tends to have annoyingly unbalanced scoring and a lot of difficult shots. I don't play it much because it's not that much fun. But I know the two targets to shoot to start modes, which collect points whether I do anything or not. It's one of the two modern-era tables at SWL that I would have picked against me. (The other was Lethal Weapon 3, also a mid-90s Data East game with about the same problems.) And, happy to say, I have two good balls, rolling up to over a hundred million points. JCS, on his last ball, gets a multiball going and even manages the double-jackpot, something which had eluded me. But his final ball drains, and he's at 105,693,150, a bit short of my score. I've won, and I can just plunge the last ball off, finishing at 114,591,340 points. I've at least won one round. I finish in 23rd place.

And poor JCS, team-rolled by

bunny_hugger and me, with four straight losses to get there. We weren't trying to pick on him or anything.

And that was our tournament. It had been three hours from the start, and we were done. PH handed us the envelopes with our prize winnings. Everyone in the bottom eight received the same $38 payout. It's our share of the dollar-an-event excise collected over the year. I don't think we earned out (surely we played at more than 38 events over the year?). But it's gratifying to come home with anything.

Now, though, we had nothing to do but watch the remaining players.

Trivia: The Broadway musical Harrigan 'n Hart, telling the story of the performing team of Edward Harrigan and Tony Hart, who in the late 19th century integrated story, song, and dance in musical farce, a key step toward popular American musical comedy, opened in the Longacre theatre on 31 January 1985. It closed after five shows. Source: Not Since Carrie: 40 Years Of Broadway Musical Flops, Ken Mandelbaum. (The Internet Broadway Database claims it closed after four shows, with 25 previews.)

Currently Reading: Popeye: An Illustrated Cultural History, Fred M Grandinetti. He does not know of the pinball machine, to appearances. Also the appendix includes some scripts for a couple of cartoons that are weirdly phonetic, like, writing out ``VWA-LA!'' for ``voilá''; or, in the lyrics to ``Why Am I So Beautiful'', having ``Can it be my grace or my form de-vogue'' for a lyric that's supposed to rhyme with ``Can it be my face or these pretty feet of mine''. The first could conceivably be a deliberate choice in the script, to spell out something phonetically so the voice actors can't get the pronunciation wrong. But, like, in the lyrics from Olive Oyl's ``If I Were President'' song? ``... And all the ice-cream cones would cost a cent''? I mean, it's clearly ``and all-day ice-cream cones'', to go along with the picture of Little Audrey licking an ice cream cone bigger than she is. So this section is a bit weird. Also weird: why these scripts? I get wanting to highlight clever writing, but most of his script examples are from the King Features Syndicate cartoons of the 60s, which were ... not ... a high point. Like, there's one where Olive Oyl has a new car, okay. And Popeye and Brutus quarrel over who gets to ride up front with her and who in the back seat. Okay. And Olive Oyl says they can both enter the Mister America contest and whichever wins, she'll ride with. What? I don't think it's got quotes from any of the King Features cartoons he said had witty scripts, so that's bizarre.

PS: So you know

bunny_hugger and I are amusement park nerds. Let's bring it down a little and get reallllly nerdy. 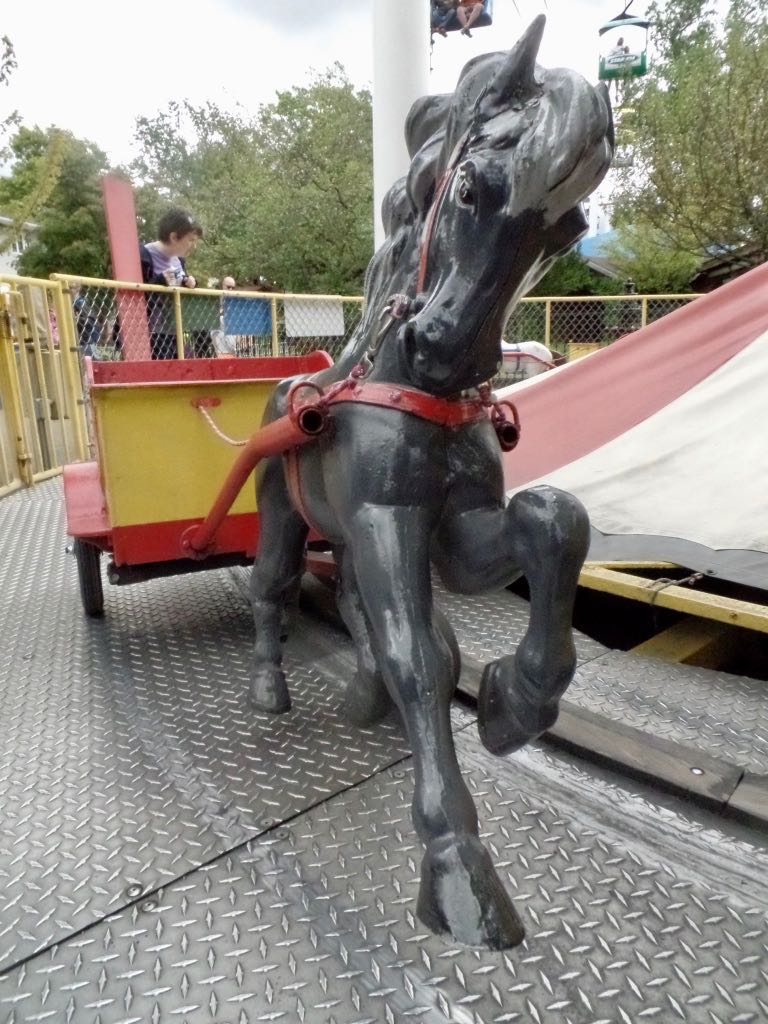 Children's pony-cart ride attraction at Waldameer. It turns out there were like 400 different manufacturers doing this kind of ride and we were briefly fascinated by trying to track them down and categorize all the variants. Fortunately, we stopped before this got to be at all a useful project. 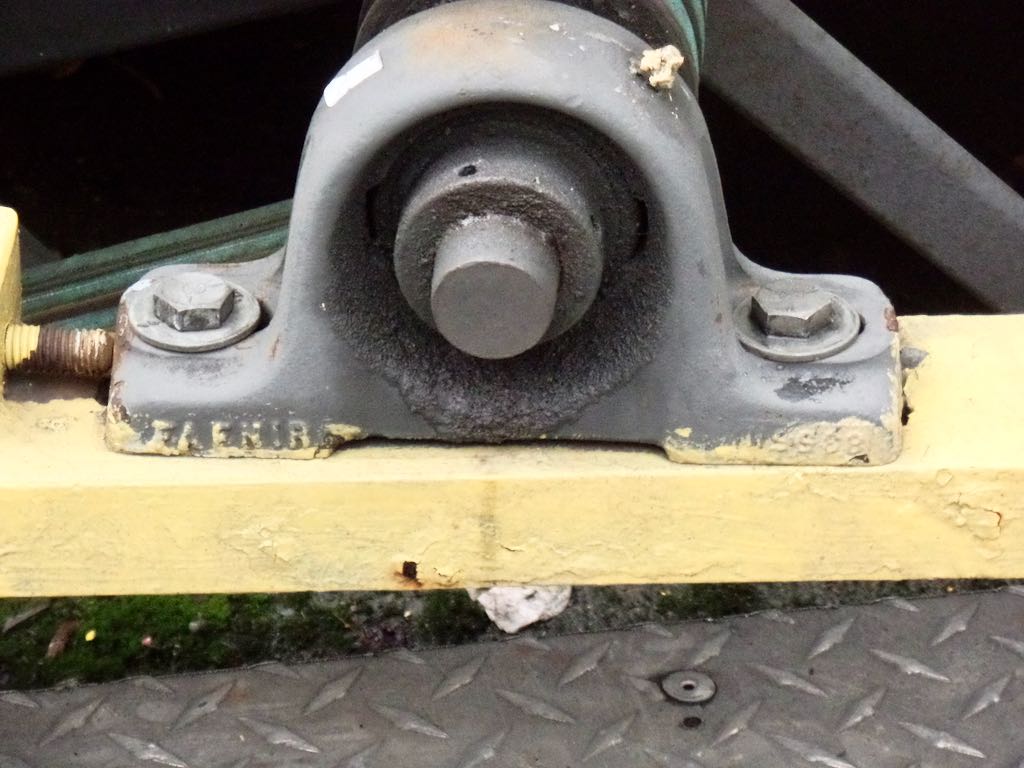 Close-up of the axle of the pony-cart ride. We had ideas this might help us understand the kind of ride and identify the manufacturer and all that. But, like, in person we couldn't be sure if that spelled out 'FAFNIR' or what, and in the picture it's not all that much clearer, is it? 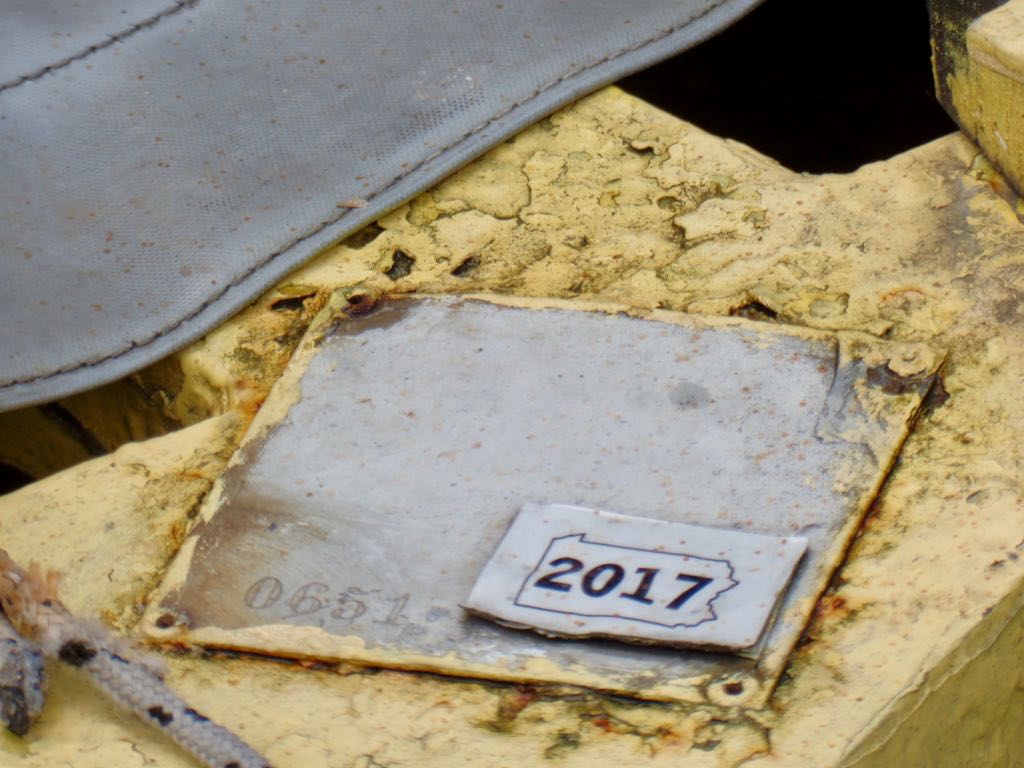 Oh, but I did spot the inspection tag for the ride.