While AJH walked in mid-air, over his win, there was stuff for the rest of us to do. Eating still, as the supply of junk food --- including some real homemade stuff, cookies and brownies and like --- held up yet. And the Sisyphean march to next time around. With the games no longer needed for the tournament, we could start playing games to qualify for the Special When Lit monthly-and-league tournaments, which should come to a head late February. Should be at the same venue. I'm hopeful that a couple people put in scores --- adding to the tournament's International Flipper Pinball Association value --- without planning to make the long drive to the west end of the lower peninsula in late February. We plan to. We could use those points.

bunny_hugger and I settled on a game of old friend Johnny Mnemonic, and it was friendlier then than it had ever been during the tournament weekend. My first ball I got several multiballs, including the Two-Ball Quick Multiball, going along with Spinner Millions. It was the same thing AJH had done for his game against CST. He did it much better, though. I scored about three billion points, my second-best-ever game.

bunny_hugger did the same thing, only moreso, putting up six billion points, her best game by far. (This is another of those tables where her best game is better than my best game.)

Also PH and AJH went into the back room that we hadn't really noticed was there, to take out the game quite a few people had been joking about needing: Gilligan's Island. They got the table a few weeks ago and it's ... oh. You know, it's honestly not a good game. I played it a little in the early 90s, when I didn't know anything, and thought it was boring. Now that I'm a more experienced player I can say ... it's kind of boring. It's a modern-era game, but it plays like a slightly broken solid-state game; there's only one thing you can do to get any points, although if you are lucky-and-skilled you can get obscenely many points. Also the game has a thing where you can give everybody but you a million points. So it's not often used for tournaments, although this year, it made the final banks in Maryland and Washington, DC, and I was expecting it for Michigan too. I was seriously thinking to pick it against DAD, which might have been catastrophic, but the worst that would've happend is losing a game. Anyway, it's a boring game, but silly and has catchy, dumb music. So it was merry fun to have it back.

I think it was while playing dollar games on this that MWS mentioned how, given its very limited game strategy, it was a one-ball game, one where all you need is a single decent ball.

bunny_hugger answered him, ``I heard that 4 Square is a one-ball game''. This did not actually obliterate MWS. His jaw did hit the floor and he said he needed aloe for that burn, though. But you can see how quickly the young like he (he's maybe five years younger than

bunny_hugger) bounce back from things.

Anyway, we couldn't spend all the night there; if nothing else, we didn't want to wear out AJH and PH, and we would have to vacate our rented cottage by 11 am. Eventually, it all wound down, and we went our merry ways.

It was Johnny Mnemonic, the movie, on a streaming service. We'd never seen the film. Just what bits of it were represented in the pinball game. I got the DVD years ago, when legendary local video store Video To Go finally closed, but we kept not finding chances to watch. Now? What better time could there be? And so we had two hours of watching unfold a movie that is very Early Internet in its stylings, very mid-90s. It's that kind of bad movie where the characters are endlessly explaining stuff, but it's always the wrong stuff (``So you have data stuffed into your brain and it's going to kill you if you don't get it out?''), the stuff that wasn't confusing in the first place, so the movie never stops being baffling. It's a good movie for watching with friends while cracking jokes, and we had the extra delight of bursting out laughing whenever we recognized a thing.

And so this closed our tournament days. Come morning, we'd close things out, secure the house, and head for home. I'll talk some about how that went all weird too. 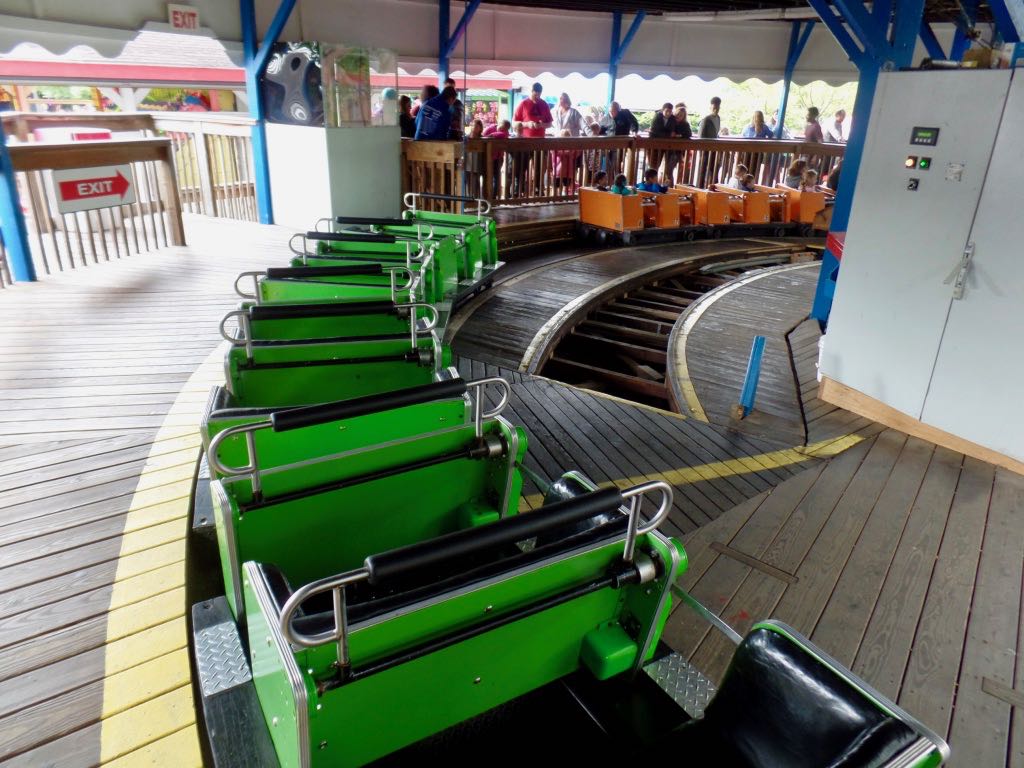 The two trains at Comet, one returning and the orange one ready for dispatch. You can see the closed-up patches of wood where the brake levers were until a few years ago. 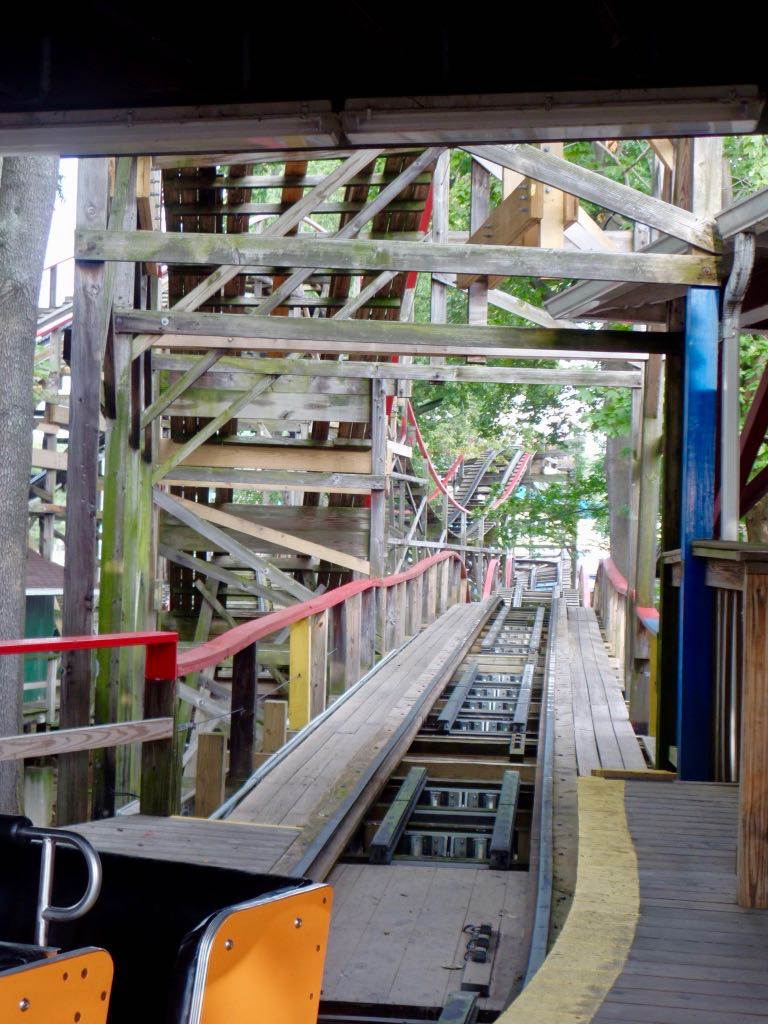 The return track for Comet, including a view of the braking areas before a train enters the station. Like many roller coasters the train comes back and turns around above the station; you can see that in the upper row of track. 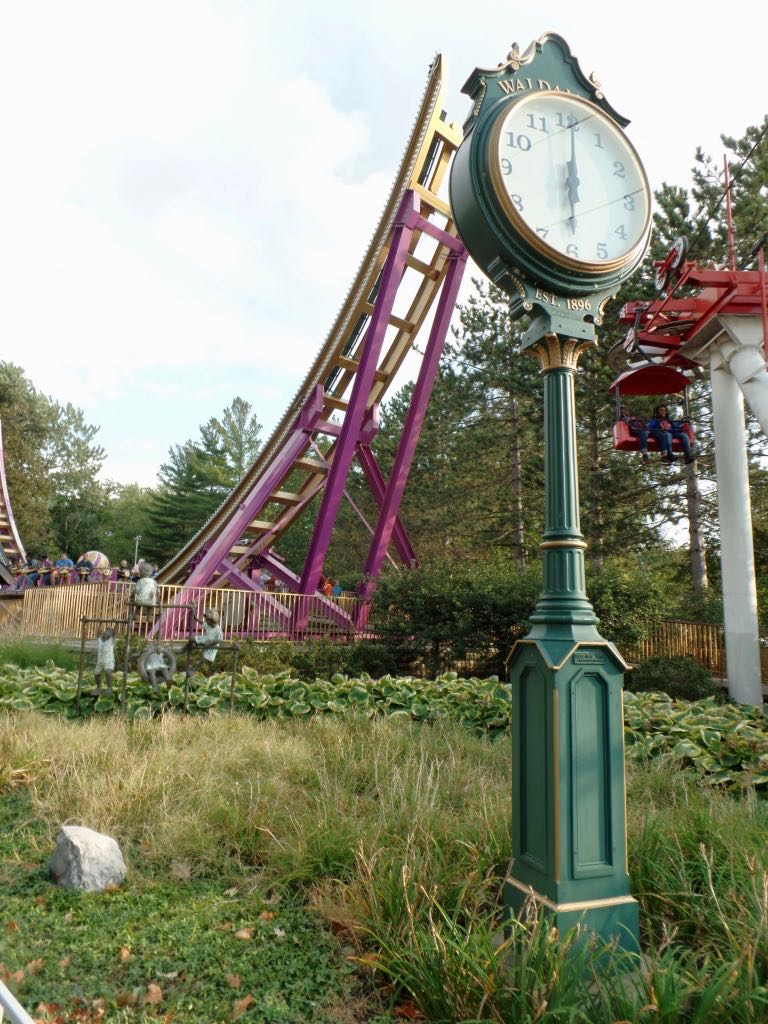 Disk'o ride at Waldameer, and one of the park clocks. Also the turnaround of the sky car ride. We didn't know it was a closed-circuit sky car ride the one time I talked

bunny_hugger into riding it. We thought it'd be a way to get to that end of the park.