You got curves like the ocean, gonna take it in slow motion

We haven't played in the Grand Rapids Pinball League this season. Part of that is

bunny_hugger's work schedule. She's teaching Monday-Wednesday-Friday classes, and the league meets Wednesdays. She could technically probably rush right from her final class to league, and if there were no problems like, say, winter weather might even make it. But it is winter, and it gets only moreso as you get to Grand Rapids, closer to Lake Michigan.

One thing I mentioned to

bunny_hugger's father, when we picked up Sunshine the day after state finals: ``We're going to go see Walk The Moon this Friday''. Not that we needed her parents to watch our rabbit. It's that he hadn't asked. We saw Walk The Moon was playing Grand Rapids, and bought tickets, months ago. Her father's asked when the concert was to be pretty much every time we saw them, since then. I'd wanted to let him know the long vigil was finally over.

They were playing in Grand Rapids, in a venue close to the Van Andel Arena, where the Grand Rapids Griffons play minor-league hockey and where event nights mean traffic is all blocked up and there's no place to park. I have a fragile knowledge of Grand Rapids's geography. I can get, from the Interstate, to the Pyramid Scheme bar where the pinball league meets, or to Stella's across the street, or to Two Beards sandwich shop down the block, and that's it. The venue, and Van Andel arena, are near to the Pyramid Scheme and the garage we use when there's an event there and we can't find street parking. But we had the satellite navigator and ... also ... snow. It has not been a snowy winter, but this day, the one we had to get into downtown Grand Rapids, we got enough snow to make the driving bothersome. I did the driving --- I'm more confident in city traffic --- but this didn't leave

bunny_hugger feeling any better about it all. Especially when we got to the last few blocks, and traffic was jammed, and the parking garage next to the venue was full. I diverted back to the garage by the Pyramid Scheme and mostly hoped that we would be able to find our way there. And, maybe someday, back again.

Finding our way there wasn't hard: we walked in the general direction of the Van Andel Arena, unconsciously joining groups of other people going in the same direction, and what do you know but across the street there was the concert venue. The place, 20 Monroe Live (not on Monroe Avenue), opened in 2017 and it's got that Retro Art Deco styling to things. Also it's got $4 sodas ($9 for a ``bottomless'' soda) so we didn't get anything to drink after all.

bunny_hugger had picked out seats in the balcony, just about center albeit in the uppermost rows, so we should get a good and unobstructed view of things.

We were not the oldest people in the audience, which we took to be a sign of how big the audience was. We were also not the youngest, and by a greater margin than usual. There seemed to be way more teens at this show than at any we could remember. But then we thought seriously. We'd seen Walk The Moon something like five other times since 2012. The only time they'd been in Michigan and we'd skipped was when they were opening for the Rolling Stones. And then they had to stop touring a while, as the lead singer's father was having medical problems that consumed his attention. Still, the other venues: weren't they all bars? Or places that restricted attendance to 18-and-over? We're not sure, but that feels right.

The opening act was Bear Hands, a group I didn't remember ever actually hearing before. They've been around a good while and

bunny_hugger recognized some of their songs from the indie radio stations we listen to. Their music did sound familiar, but it might be that I've just gotten to know enough indie-rock/post-punk that things can sound familiar even if I haven't heard them before. They played a good 45 minutes, though. And had some nice stage patter too. Pointing out the coat check, for example, a service we hadn't used. (Wisely; the line after the concert was about 250,000 people long.) Or waving to the balcony where, they said, Walk the Moon's members were. At least, they said they were going to be here. Can't say these are deep jokes, but they're cozy ones, and delivered well. Good warm-up to the show.

PS: and now for a moment of extreme Waldameer! At least one of its extremities. 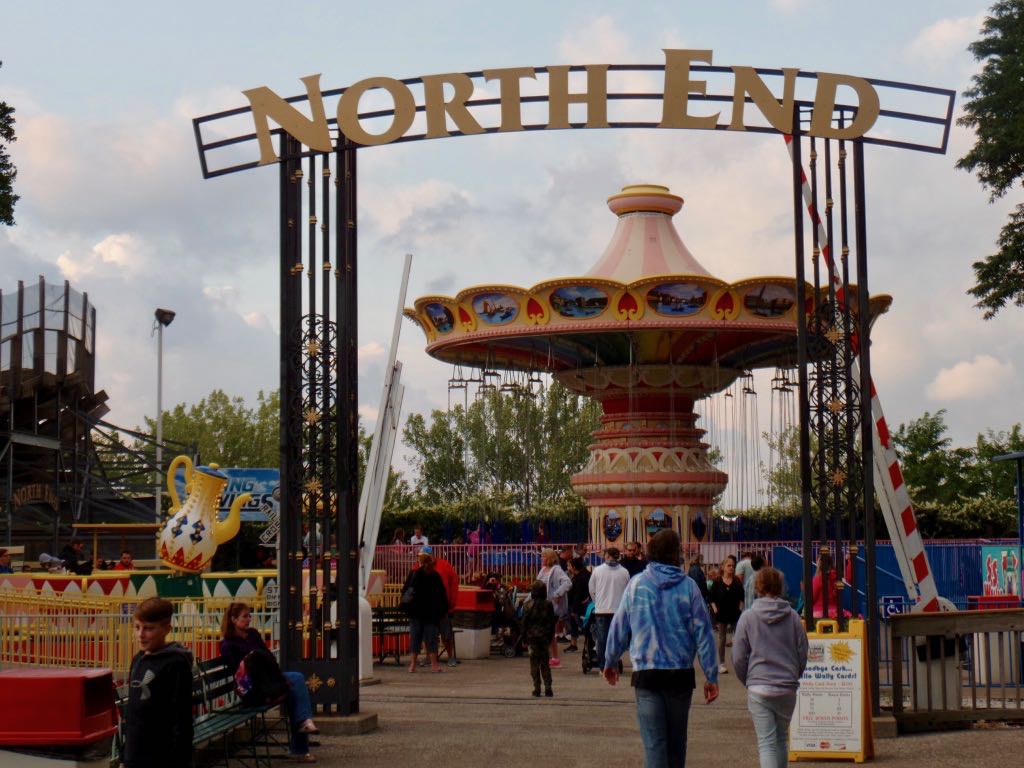 North End is a relatively recent expansion on the park. Past it is the Ravine Flyer II track and then Lake Erie. It's got the swing ride as the major attraction and then some smaller stuff, tea cups and kiddie rides and such. The gates are to protect the miniature railway as that passes by. 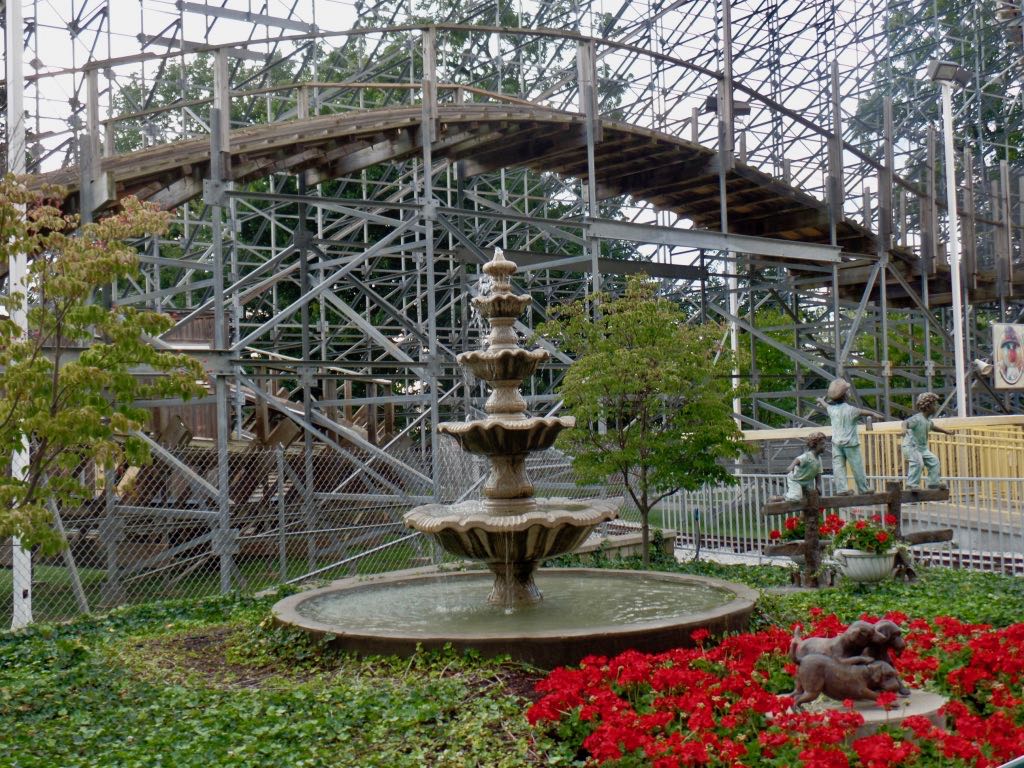 Water fountain and several other sculptures, like of several kids playing, or several dogs playing, in the park over at the North End. That's Ravine Flyer II in the background. 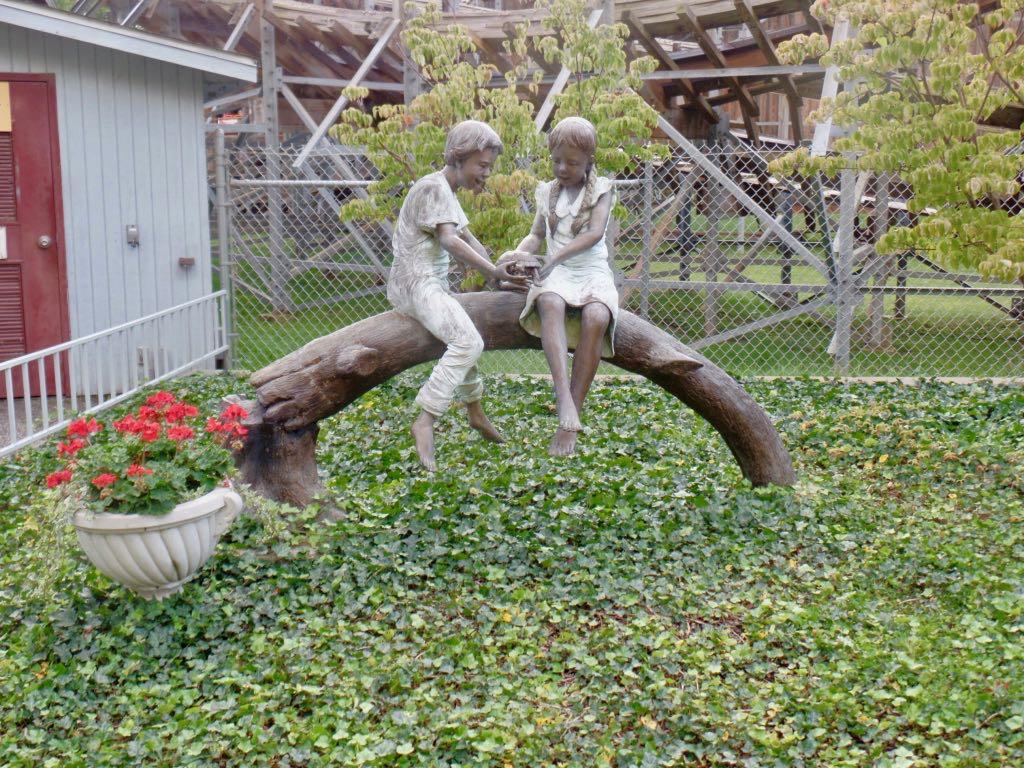 More Waldameer garden statues. The park is not short on sculptures and floral arrangements. My Roller Coaster Tycoon parks always get much better-decorated after I've visited Waldameer.