When we first saw Walk The Moon we knew all the songs. Well, they were opening for other bands, then. But when they got big enough to headline, we knew their whole show. We'd listened to their album on the way there and at least I checked off each song as they played it. Those days are long gone; they've got enough albums there's no playing them all in one show. And we haven't listened to their newer ones, not so often, not so very much. On our drive to Grand Rapids we listened to the newest one, that's been out a while and that we just hadn't gotten to before. The new songs were nice. They felt like the Walk The Moon songs we knew. I didn't feel caught by any of them, not the way ``Anna Sun'' or ``Shut Up And Dance'' demand your attention. But only some music demands a place in your life right away. Some music finds the place in your life that it fits.

I did not keep obsessive track of the songs they played. The ones I recognized, certainly I appreciated recognizing. The new songs I tried to appreciate, of course, and liked. Part of me wondered which of their older sets they'd have dropped, though, and whether it would be any of the songs whose place has become important to us, such as ``Jenny''. That's the song I've been using as subject lines here and it became dear when

bunny_hugger filked a few lines to be about our rabbit Stephen. (``St-st-st-stephen's got a body like a pillowcast/ He's eating some hay, eating some hay ... '')

Some of what I think of as old Walk The Moon stuff has faded away, particularly the audience painting their faces ahead of the show. But some hasn't. The whiff of references that might be furry or might just be that's what kids are like anymore. The band coming out on stage to the Circle of Life intro from The Lion King. The lead singer's meditational invitation to ball up all the things that have troubled you, and release it, to lead in to ``I Can Lift A Car''.

They played ``Shut Up And Dance'', of course, and much earlier in the show than I would have figured. They followed this with some patter about flying back from a tour date in South America and having a tiny window of time to record a single, and set up how they were going to play this, the first of their songs to be featured in a movie. Which startled me since I had thought ``Shut Up And Dance'' was. The song was featured as a recurring beat in the underachieving kids animated movie Norm of the North. (There, a song that is infectious joy made incarnate is used to just feel sluggish and sad and disappointing.) Well, live and learn, though, and there's a lot of movies out there. I clearly just hadn't heard of one before. It was their cover of the theme to Ghostbusters. OK, they got me. Ghostbusters seems to have taken the place of their old cover of ``Burning Down The House''.

Pretty near the whole audience stood up for ``Shut Up And Dance'', and fair enough. It's a song that encourages dancing or, if you're me, swaying in a rhythm that's pretty close to the beat, but of some other song. Afterwards a couple people tried sitting down, but it never really took. Which is fine; it was just a couple songs to the closing of the main performance and they were all ones you could reasonably be on your feet for, like, well, the theme to Ghostbusters.

Not standing up, even when the lead to ``I Can Lift A Car'' encouraged you to stand up and, at points in the song, wave your arms? The older couple sitting next to

bunny_hugger. We're not quite sure what their deal was; they didn't seem to be enjoying the band, or the atmosphere. Don't know why they were there. Possibly they were with some group that did want to. (There was a quartet in front of us, for example, who were together and even asked me to take some pictures of them, not knowing they'd hit on one of the few people in the audience who would try to compose the shot well.) Possibly they just figure they'll try going to concerts even if they don't know anything about the band.

bunny_hugger and I had discussed our feeling that we don't go to enough concerts and maybe we should just go to whatever's at a venue we like sometimes. Not our concern, really, what their deal was. But they did leave the moment the regular performance was over, and didn't stick around or sit down again for the encore.

The encore, yes, closed with them singing ``Anna Sun''. They haven't quite gotten to be so big or have a catalogue quite deep enough they could leave off the song they toured on for their first forty years. We know someday we will go to a concert and they'll have retired a song they probably compulsively play in their sleep. But the world is not quite that old, not yet.

Trivia: Wilhelm Leibniz had studied essentially no mathematics before he was 26 years old. One biographer has described his mathematics knowledge at that age as ``deplorable''. Source: The Clockwork Universe: Isaac Newton, the Royal Society, and the Birth of the Modern World, Edward Dolnick. (Leibniz was rather stronger in philosophy and law.)

PS: With fireworks going on, can the close of the day at Waldameer be far off? 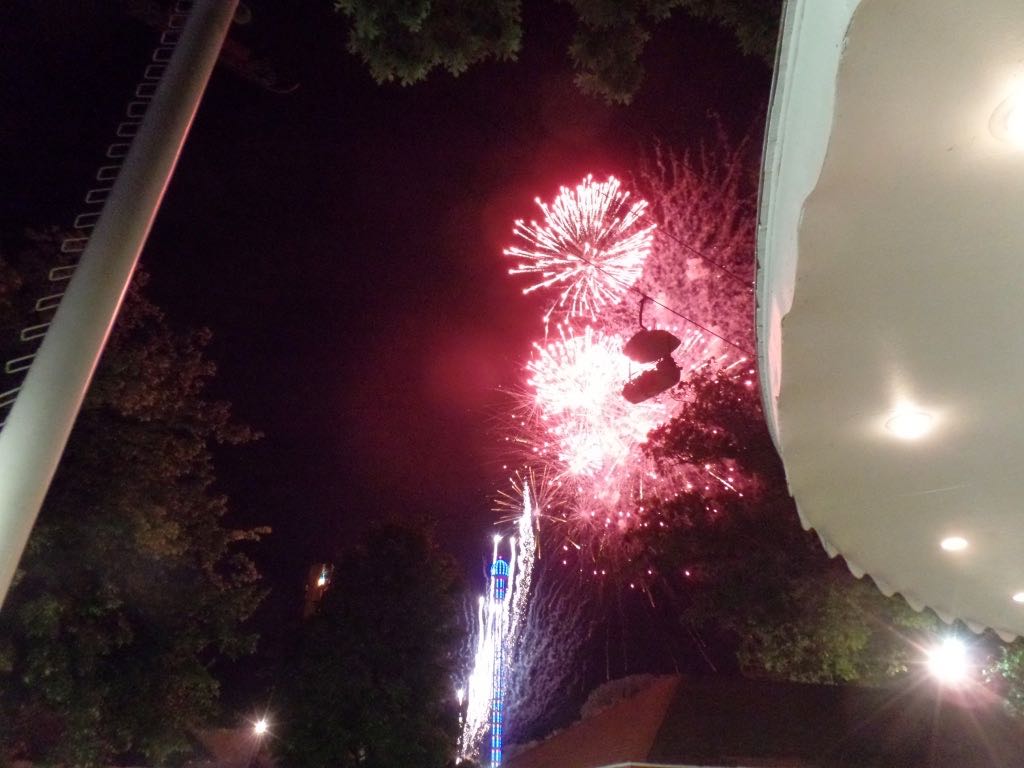 And here, the Sky Ride-in-front-of-the-fireworks theory really proves itself. 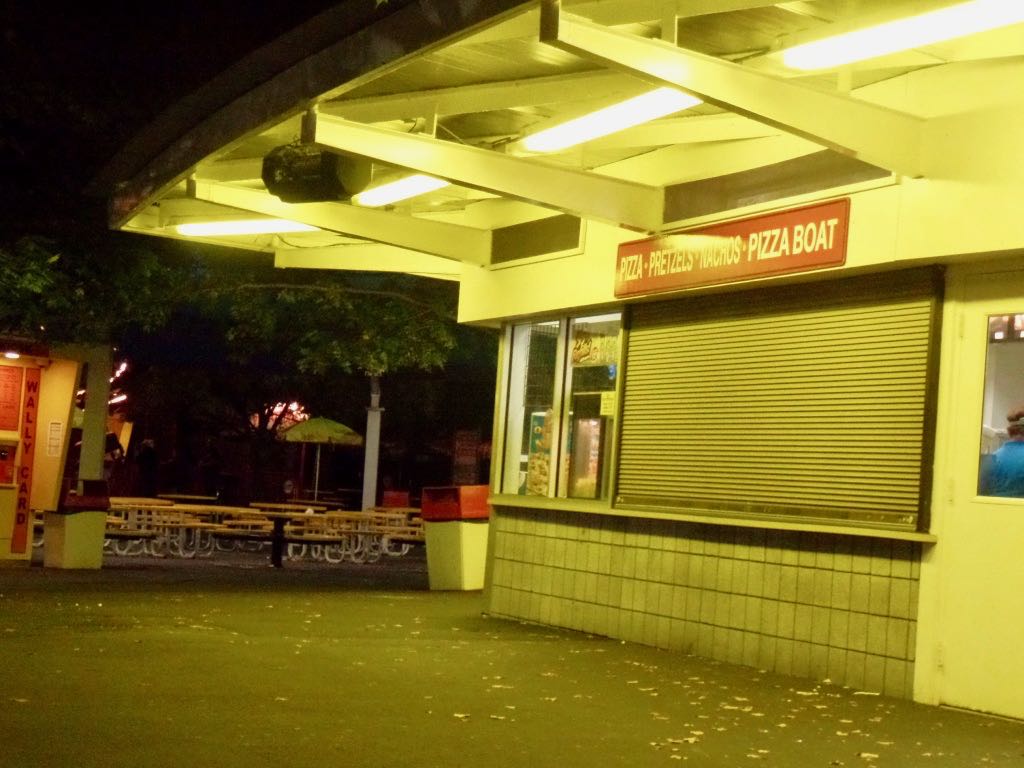 And now some pictures of Waldameer closing up, or closed, for the night. Here, the famed Pizza Boat is in the harbor. 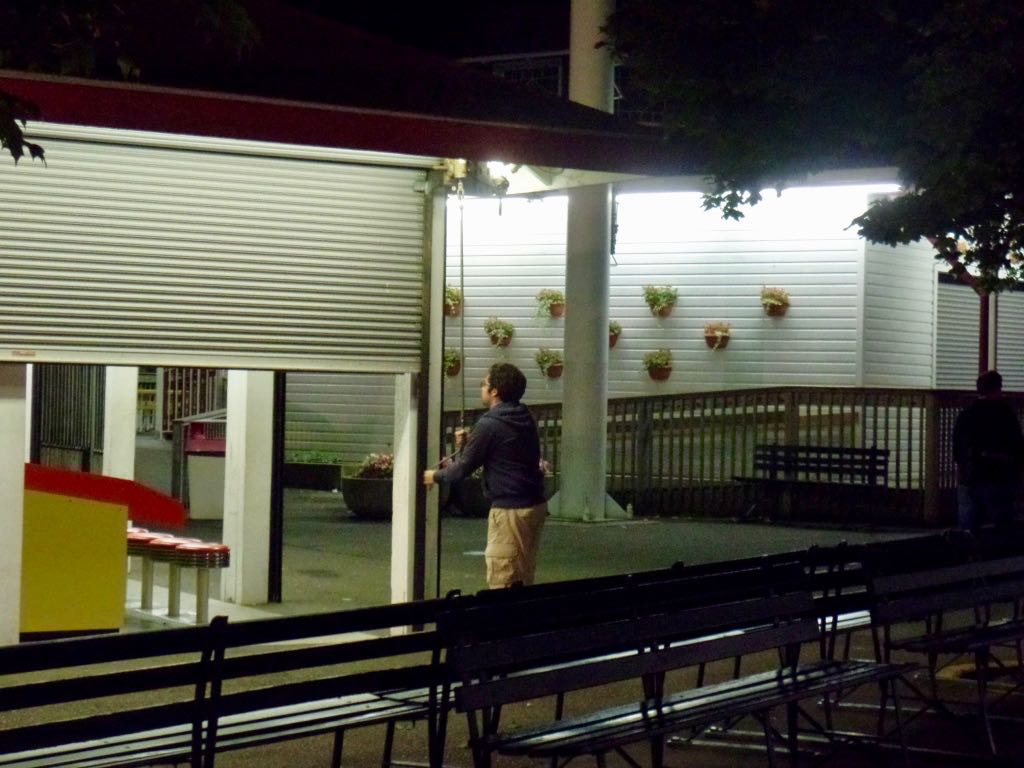 Midway games being put away for the night.