You got freckles on your shoulder, ammunition like a solider, and visions, ambitions to be the best

Something for after the show that promised to be a nice capstone was that we could go to Stella's. The bar's just across the street from the Pyramid Scheme. It's got the nearest Funhouse pinball table to us, although it's currently in a place kind of lousy to actually play. It's got the Impossible Burger, and the last times we'd had one they were getting better at making them. It'd be a great place to go have dinner. The thing we had failed to think about: the concert was a Friday. Do you know what a downtown Grand Rapids bar is like at 11 pm on a Friday? They had also gone to ``seat yourself'' so there was no guessing how long we'd have to wait for a table. We trust there are other places to eat in Grand Rapids, but the two we know of are Two Beards, which closed at like 8 pm, and Menna's Joint, which may or may not have closed but is hard to feel much passion for either way. We figured to drive home and eat.

Driving home we saw that unsettling suddenly-appearing clot of traffic with flashing lights off in the distance, reflected in the snow and the clouds. I turned off the Interstate, figuring we could find Grand River Avenue, which roughly parallels I-96 for most of both roads' run. The off-ramp sent us south of I-96 and after a fair distance trying to follow the signs for Emergency I-96 I determined that Grand River was north of I-96. Eventually I found a place I could turn around, although it wasn't easy; while we were in the strip mall district, there was snow on most everything. And few signs of anything open except presumably the Taco Bells.

Back across the Interstate (there were still lights flashing, and I grumbled that this better be a major closure for how much time we'd invested in going around it) and to Grand River. (It's known as Cascade in that area, actually, but same road.) Grand River's a pretty substantial road in our part of Michigan and I guess I just assumed it would be here too. This was a much lesser road, though, and unplowed, and oh good, here's the car that figures there's no reason not to tailgate me at 40 mph on a narrow road when the snow keeps on heaving down and we're going up and down what hills mid-Michigan even has. Sheesh.

So all that added a fair bit of time to our drive home, which is all right since we were falling behind on listening to the Greatest Generation. (We used to get a lot of listening to it done while driving to and from Grand Rapids Pinball League, but we aren't in that league this season.)

We got back to Lansing, anyway, and while going to the gas station --- it was supposed to get close to 0 Fahrenheit overnight and over the next few days, and somewhere I got the idea it's dangerous to have too low a gas tank when it's that cold --- noticed the LeeLee's Coney Island was open. A Coney Island is the lower-Michigan variant on a diner. It was in the spot that was, until last spring, the Fish and Chips. They'd opened in September, but only recently have started having late nights, some nights. Friday was one of them. We went in. It was the first time we'd been to the place in its new incarnation.

They'd changed the decor, mostly by taking down the most datedly Arthur Treacher's leftover stuff, the pictures of whaling ships and the faintly-New-Englandy lanterns and so on. Some of the changes are good ones, like mirrors faking the windows. We were the only people sitting down for a meal, and the two people on staff were happy to see us and talk with us. This was friendly enough. Some people stopped in to pick up food, and I guess there was a drive-through pickup. It felt like a frightfully small crowd considering it was so near when the bars let out, though. Maybe the bitter cold was keeping people at home.

But we've been hoping that the place would succeed, for several counts. We want local stuff to thrive, for example. And since the loss of Theio's the Lansing Eastside has really needed a 24-hour diner. They close too early on Tuesday nights to be an after-pinball-league meal hangout. They've said they hope to open up later more weeknights. But based on this one sample on a particularly cold, snowy night, I can't blame them if they figure Tuesdays aren't worth the staffing. But maybe it was just a really bad night, and maybe as they build a reputation crowds will come. I was content with the cheese omelette, and raisin toast, and will say so to anyone interested.

Trivia: In 1467 Pope Paul II adopted as the official color of the robes of cardinals thescarlet produced by the use of imported kermes (insect dye) or galls (a growth on oak trees produced by certain insects). Source: Worldly Goods: A New History of the Renaissance, Lisa Jardine.

PS: More of putting away Waldameer! It's not done yet, remarkably. I'll remark on how next time. 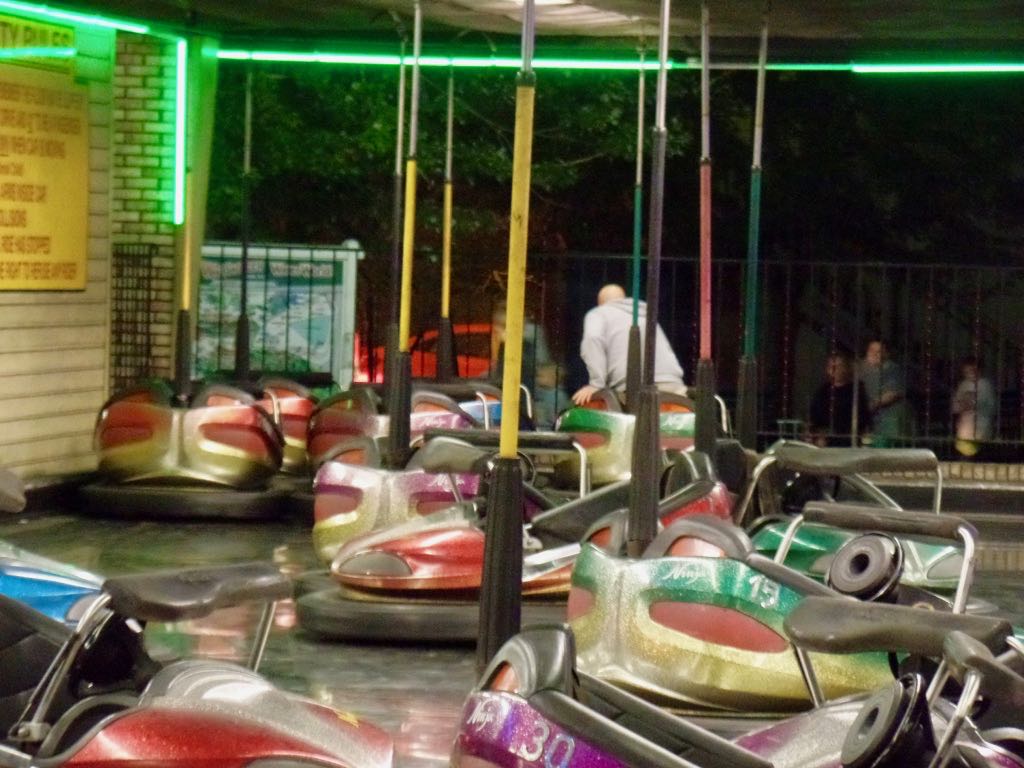 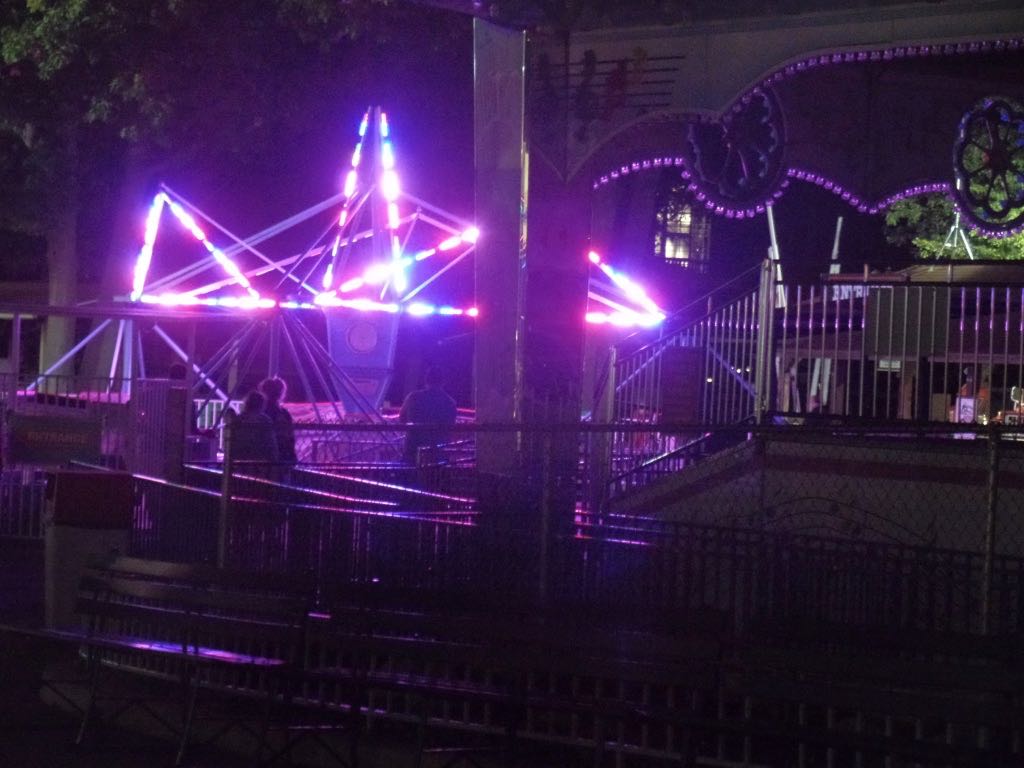 The Scrambler with its very nice lights package. To the side is the Musik Express. 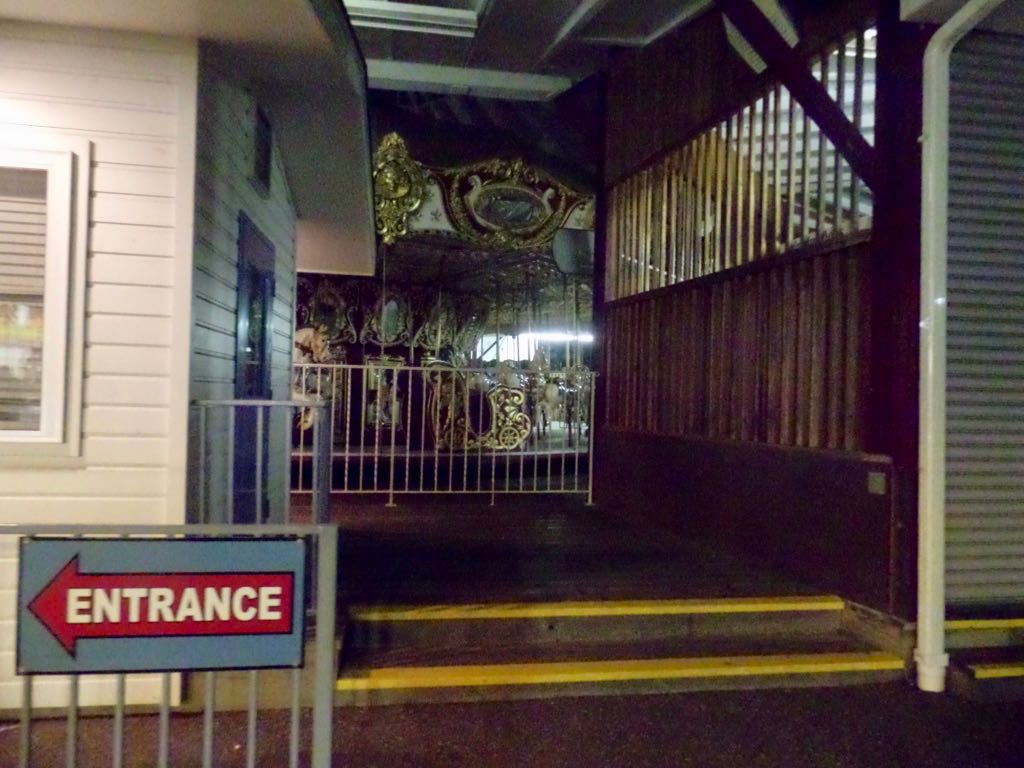 View of the Chance carousel, from the side entrance. The building to the side there is, I think, guest relations. To the right is, I think, a food stand.