So we had a bit of a week, the end of January. The Monday of it started with a snowstorm. A lot of snow; something like six to eight inches. It was so obviously bad enough that basically every school in the lower peninsula closed. Except the university where

bunny_hugger teaches. They wouldn't do it, and they kept putting out notices on social media about safe driving in the winter.

bunny_hugger was having none of it, and would not go in to classes Monday. They finally did cancel, but not until about 9 am, and their social media team had to spend the snow day being --- correctly --- ragged on for the needlessly delayed decision-making here. Anyway, for all that the Monday-Wednesday-Friday schedule has been bad for

bunny_hugger, at least here, she'd gotten a rare snow day, and her second Monday in a row off.

Tuesday we dug out a bit, while I went and got a cold. It must have been from the concert; we just hadn't done anything else. And waited for something maybe really exciting. It was supposed to get really cold out. Like, below 0 Fahrenheit. Cold enough we left a faucet running at a slow drizzle and I kept worrying that this wouldn't be enough. All the schools around Lansing announced closures, some of them out through Thursday.

bunny_hugger's school, maybe stung by the criticism, joined at a reasonable hour, cancelling the Wednesday classes. They'd cancel Thursday, too, in the middle of the day Wednesday.

bunny_hugger basically never gets snow days, and here she got two in a week. The only real down side is we got another two inches of snow on Tuesday night, and it was too bitterly cold to go out Wednesday and shovel. Between the pinball championship weekend, when we were away for two days, and this we're starting to look like scofflaws. On Thursday, slightly less terribly cold,

bunny_hugger went out and shoveled the sidewalk clear at least.

Friday, well, that wasn't going to bring any weather problems against us. It was chilly --- not above freezing --- but not unbearable, and with no fresh snow. But still no classes, because

bunny_hugger had scheduled a doctor's appointment before realizing she was going to be on a Monday-Wednesday-Friday schedule this term, and there wasn't any rescheduling available. So the happy result is a week of legitimately skipped and cancelled classes, although the cost was making a ruin of her syllabus. Potentially more ruin, when

bunny_hugger caught my cold and had to fear missing the following Monday.

Saturday, it was like 50 degrees out, and over the warm weekend basically all the snow melted away. Also Special When Lit held its monthly tournament and neither of us remembered. But that's all right, because we could finally leave the house again, and didn't even need to.

The weather wasn't through throwing fiascos at us, though. This past Tuesday-to-Wednesday threw down freezing rain, to the point that

bunny_hugger's school cancelled classes through to 11 am. Great except that her first class is at noon. She made the effort to get up there, but the roads got so bad at the county line that she had to stop and turn around. She could make it up for the later classes, when the roads were a little less bad, but still. That's four times that particular section got cancelled and it's barely a month into the semester. There have been spans of several years that she hasn't cancelled anything four times over. It's got me looking at the ten-day forecasts and worrying when I see ... oh, well, there. Friday's forecast, this morning, was for three-to-five inches of snow. Now it's dropped shifted to rain. This far out I'm not committing to anything, but ... goodness.

PS: The next weekend we visited Michigan's Adventure, because we love getting to closing day. 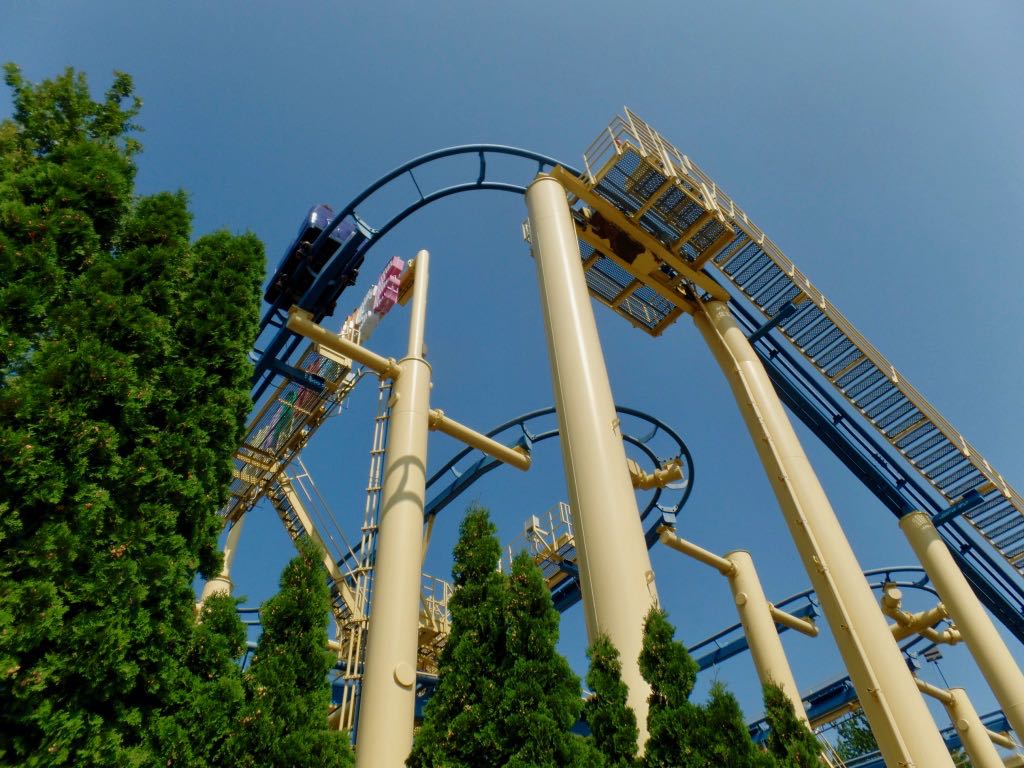 The last ride you pass as you approach Michigan's Adventure's entrance is the always-busy Mad Mouse. It's always good for a nice dramatic establishing shot. 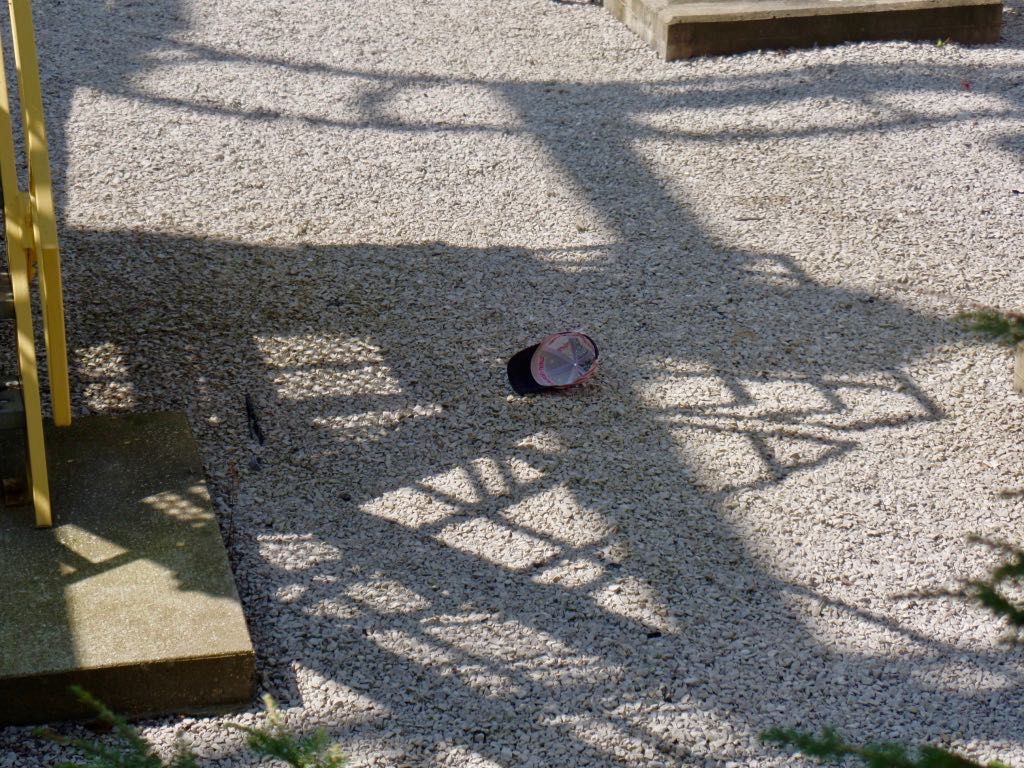 Someone on Mad Mouse suffered a tragic loss of hat. Also sunglasses, it looks like. I hope there wasn't a scuffle while the car was in motion. 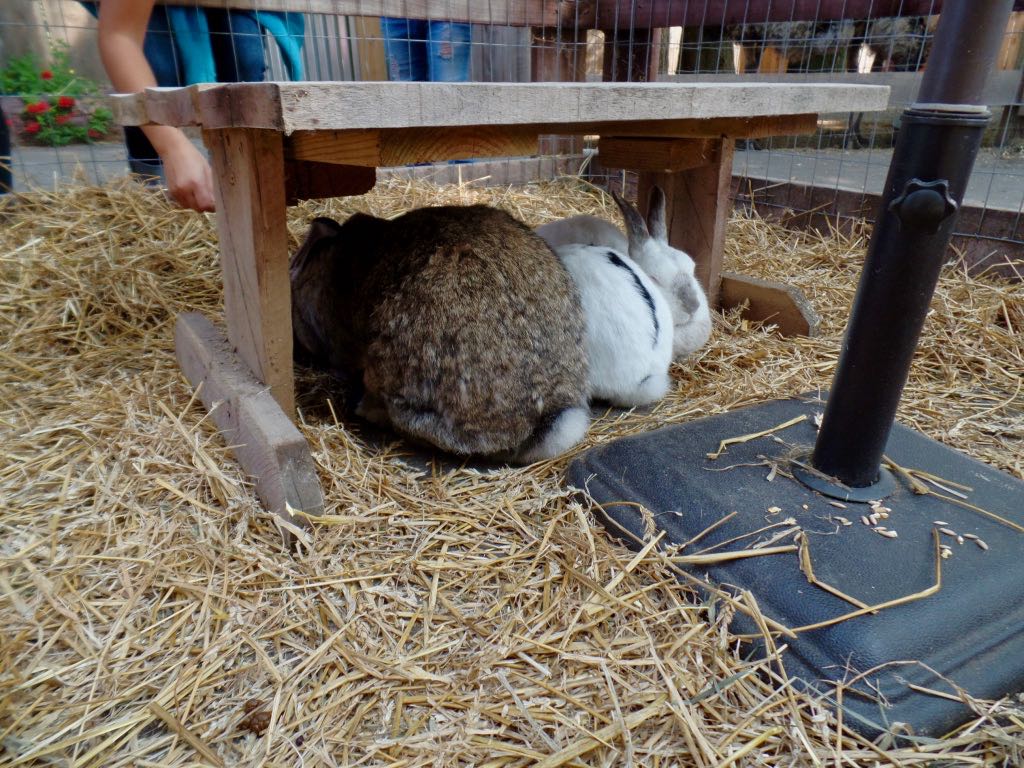 At the petting zoo, the bunnies have decided they have had enough season and are done, thank you.