Because every evening it's Halloween

When Stern announced their follow-up pinball to The Beatles,

bunny_hugger challenged me to name it. She thought the title was one that sounded like the joke you would make about pinball licenses, which have mostly alternated between bands and nerd media properties lately. (The last few games were The Beatles, Deadpool --- the comic book rather than the movies, remarkably --- and before that Iron Maiden and Star Wars.) I didn't get close to the answer, which was The Munsters. Which is kind of funny because one of the all-time great pinball games, at the lead of the Murderer's Row of all-time great games of the 90s, was The Addams Family. Here, thirty years later, was the title that sounded like What You Get If You Can't Get The Addams Family.

But the hipster bar up the street was getting one, and Pinball Pete's, which supplies games, leaned on

bunny_hugger to hold a launch party, and she yielded. This would force some unpleasant compromises out of her. One is that the only day free to hold it was a Saturday. We'd held tournaments on weekdays in the past, so as not to conflict with shows or events. But Saturday was the least-bad alternative, if we started things the moment the bar opened at 3 pm. And if it ran late, we'd overlap with the show, the Valentine's Day Burlesque-a-Go-Go, one of the bar's biggest nights. I promised that we would get things done before the show started, but I couldn't promise that.

bunny_hugger had data from previous launch parties to insist there was no way we could finish before the burlesque started.

And then we got some extra complications late in the process.

bunny_hugger bought a license to use some tournament-running software for The Beatles launch party. It made this format, where each person puts up qualifying scores on a set of games and their highest relative scores qualify you for playoffs, easy to run. But in the months since the last launch party

bunny_hugger had lost her password, and locked out her account making guesses at it, and it was not clear that this would get sorted out before the tournament started. I printed up paper scoresheets, so that we'd be able to work everything out manually. Not ideal, but at least functional. It was a bit stressful.

bunny_hugger could enter the backlog of scores while I took down new ones.

The format was ``Herb-style qualifying''. Play at least three of the five monster-themed games --- The Munsters, The Addams Family, Monster Bash, Elvira's Scared Stiff, and Ghostbusters --- up to two times, with your highest score on each table going to your ranking. People had three and a half hours to put up scores, and then the top eight, or top half, would go to finals. (International Flipper Pinball Association rules strongly discourage more than half of the players going to finals.)

And through all this, somehow,

bunny_hugger and I had to find time to play games, too. Last time we figured we would get to the venue before open qualifying began, and play our games first, and be free the rest of the day to administrate. But there wasn't time, not without running up against the burlesque show, so we had to take moments when we possibly could. I was still playing my last game as 6:30 arrived and the cutoff came. And I was having an absolute killer of a Monster Bash game, the highest I've ever played at our hipster bar and my second-highest-scoring game ever. That game launched me from just-below-the-cutoff to sixth place. And it knocked out a person who hadn't played before, but was delighted to learn he was safely in, and then less delighted to learn he was on the bubble (someone above him had left after finishing his qualifying play, but then came back, which he hadn't been necessarily figuring to do). But he was in unless I went and put up the highest score of the day on Monster Bash, which, oops. ... Oh, yikes; it's worse than that. I see from the results that half my score would still have been the best all day on that table. Well, double oops. ... Well, that put him in a tie for the last qualifying position, which was broken by a one-ball tiebreaker on which his opponent put up a lousy score, under 300,000. And he did worse, so he was done.

But the good news. I was in the playoffs! So was

bunny_hugger! And even better, we weren't going to play each other first round! Each round, as usual, would be three games, with PAPA-style scoring where the first-place finisher on a table gets 4 points, second-place 2 points, third-place 1 point, fourth-place 0. Top two finishers each group go on to finals. My first round went fantastically. We started on The Munsters and I had one of those balls that just destroys other people's ability to even play: over 40 million points, on a table nobody had gotten above 38 million on all day. And I went on to have two more good balls, finishing with a grand championship and over 100 million points, which seems good.

The next game, Ghostbusters, I didn't dominate so much --- MWS came within a whisker of beating me --- but I still came in first. And we got to talking with a couple guys who happened to be hanging around, and didn't know about the tournament but did know their pinball. They got to talking with RED --- who maintains the tables for Pinball Pete's --- about Surf 'N' Safari, a water-park-themed game that I really like even though it's not actually that good a table. But boy, if we could get it in ... well, anyway. The last table was Scared Stiff, and after a shaky first two balls I had a breakaway third ball, coming out to just crush everyone again. I had that rarest of things, three first-place finishes for a perfect 12 points.

bunny_hugger did not have a perfect round, or even a first-place finish. She was the one person in her three-person group not to move on. But that did mean, at least, we wouldn't be playing each other in finals.

And how did finals go? Well, I had just put up a sequence of four awesome games, including some amazing play on The Munsters --- which the rules specified would be the final game played --- that seemed to herald a breakthrough in how to play the game. So on that hot streak I ... tumbled over and died. Repeatedly. I didn't just have one bad ball. Or one bad game. I had nine straight bad balls, coming in last place all three games and, particularly, finishing The Munsters at under one million, less than one percent of my previous game's score. Ouch.

Did we finish before the Burlesque-A-Go-Go started? Yes, we did. Not before the doors opened, before they started charging admission to the venue. And one of the doorkeepers did come over to ask if we were going to finish up before the show started. We were on the scheduled last game, although there was the possibility of having to do a tiebreaker game. We finished in just enough time that we snuck in one last, post-tournament, game of The Munsters, which is proving to be a good bit of fun (among other nice touches, the game has a laugh track that chuckles nervously if you shoot low-valued targets), before we cleared out.

It was still early enough in the night, for all that we were tired, that we wanted to eat. So we went with MWS and RED over to LeeLee's, that Coney Island I talked about just last Saturday (the day of the tournament). Had the veggie omelette this time and was again satisfied with that. Still, it all would have been much better if we'd had a couple more hours to put into the thing. Maybe it would have been a bit less stressful.

Trivia: In 1171, Reiner of Paderborn, dean of the cathedral at Paderborn (on the Lippe river in what is now western Germany) wrote a treatise which used Hindu-Arabic numerals to compute the date of Easter, and along the way proving that the accepted 19-year lunisolar cycle was misaligned with the true movements of the sun and moon, losing one day every 315 years. Source: The Calendar: The 5000-Year Struggle to Align the Clock with the Heavens --- And What Happened to the Missing Ten Days, David Ewing Duncan.

PS: In Which I Am Disturbed By A Triangle Theorem That Isn't Morley's Somehow because you didn't think I could read a whole book about triangles and get nothing from it, did you? 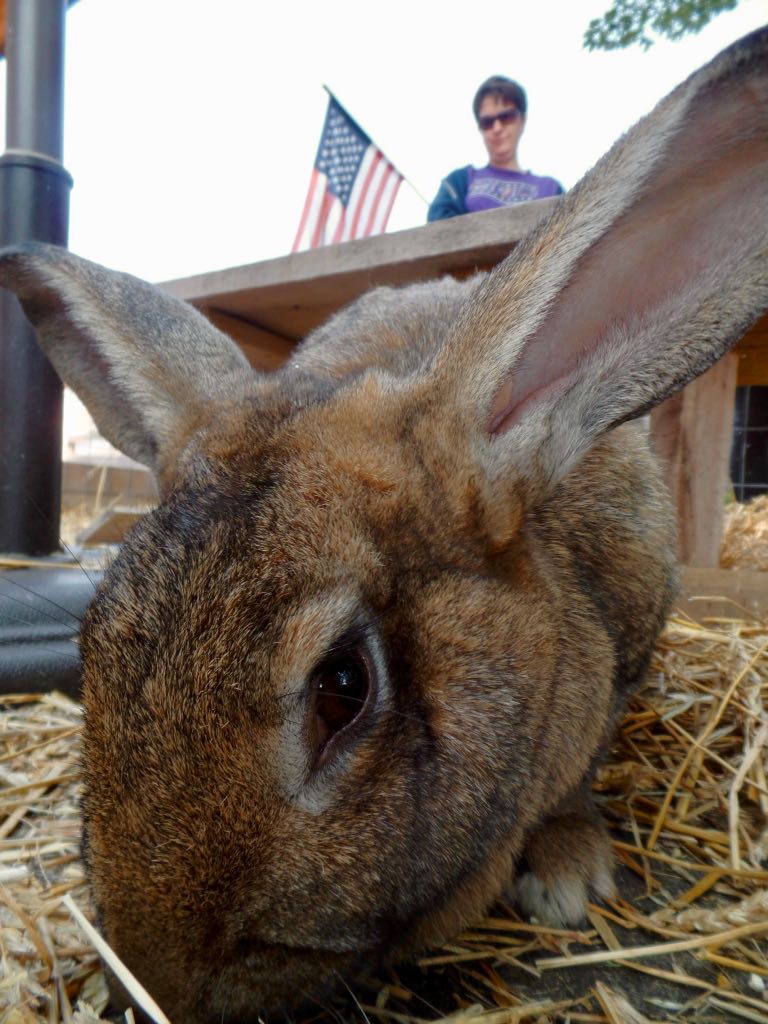 bunny_hugger looking over the Flemish Giant at the Michigan's Adventure Funland Farm petting zoo. (The park used to be Deer Park Funland.) 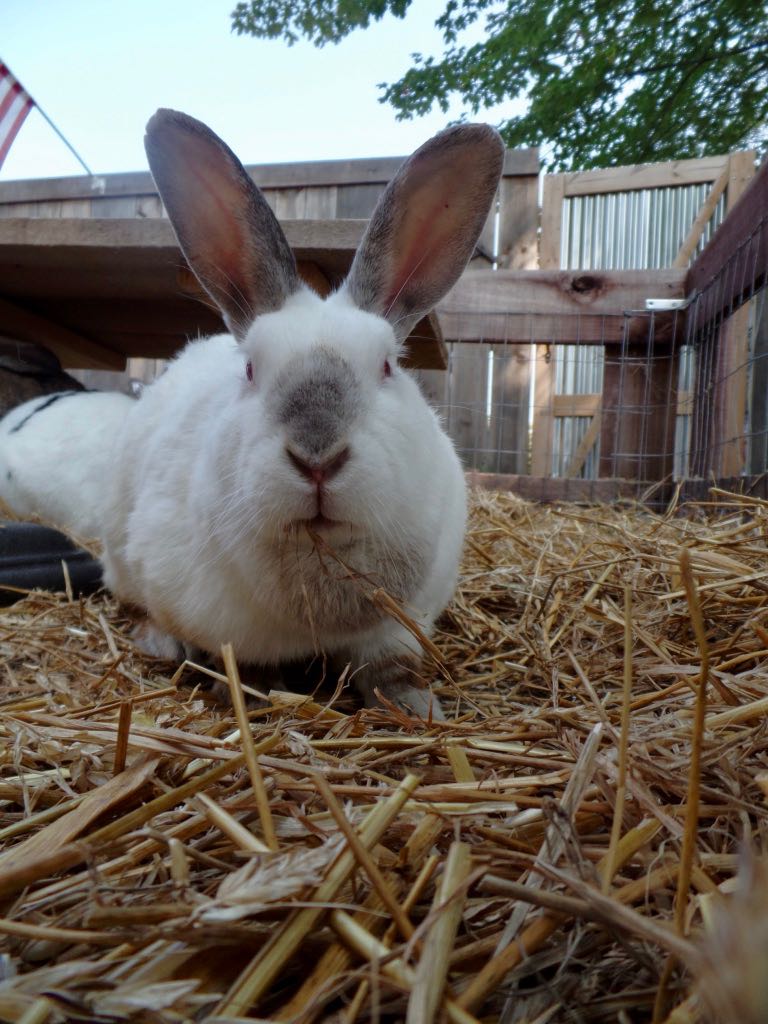 Californian rabbit wondering when she's going to get some privacy around here, thank you. 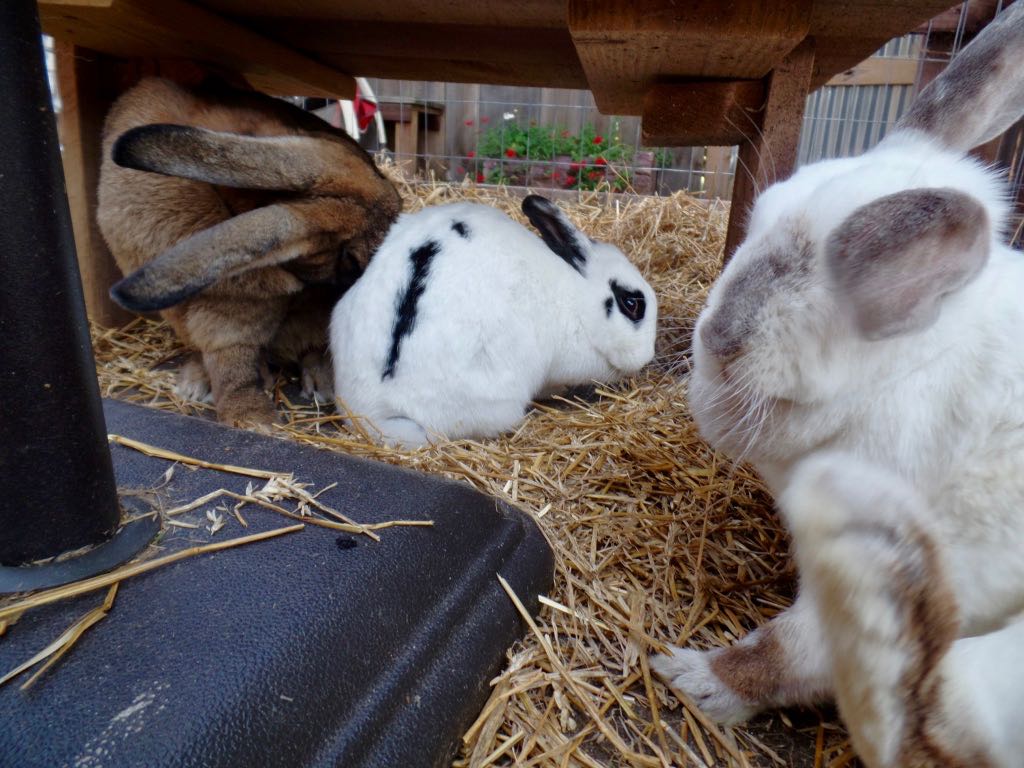 Bunnies in the act of self-care.