There's too much confusion, I can't get no relief

Back to my and

bunny_hugger's lives, and what we do with them. This past Sunday was once again the Lunar New Year celebration at the Meridian Mall, as organized by the area Chinese association. We've tried to get to this each year since we learned they were a thing. We missed last year for reasons I forget, and one year we had the wrong date, but otherwise it's a good chance to come out, hang around the mall a little, watch a very long variety show, and never win a raffle prize. This year, we made it, although by only a few minutes. I'd thought it started at 2 pm and was being slow to get the day started.

The parade, tromping around the mall, was small this year. There was the one Chinese dragon, maneuvered by kids. And there was a troupe of girls who, I think, did dance and a bit of gymnastics in the variety show. The other groups who'd been in past parades, like a karate class or particularly the lion dancers, weren't there. If it were explained it was not to us. Also rather than someone playing a drum, they had a large speaker wheeled around on a cart. Basic but functional.

The variety show was pretty much as we'd hope. The show has always had this curious mix. There's things that are clearly about Chinese culture, like musical pieces, fashion shows demonstrating traditional dress, or demonstrations of tai chi. We got an early look at the tai chi, too, as we were sitting on a bench eating cheese curds from A&W right next to where that group happened to be rehearsing. Then there were things that seemed to be just of interest to people affiliated with the organizers somehow, like the zumba session or the street dancers. The warmup act was, we thought, one they've had before too, singers who performed, for example, ``All Along The Watchtower''. The person who sings ``Edelweiss'' was not there this year, or maybe performed while we were off at A&W getting cheese curds.

The show raffled off prizes, as it has in previous years. This time around the prizes were wrapped in light paper, so there was no guessing whether one was winning a Dutch oven or a fabric steamer. ... Which were two of the prizes given away, it turns out. The very last of the raffle prizes was a television set, but the person who won that didn't open the package and just took the hosts at their word about what was inside. There was a great little moment where a kid who'd won a prize insisted on going for the bigger wrapped box underneath the one the hosts were insisting he take.

I was curious about and baffled by a tomato sitting on the floor, just outside the door of a clothing shop adjacent to the show.

bunny_hugger investigated and informed me it was, in fact, a tangerine. Well, that makes more sense then. (It really does, but it's fun to pretend it doesn't.)

In past years we've always gone on to the little crafts section and done some little projects. This has given us great decorative dividends like hangable fans with wax-crayon illustrations of monkeys or dragons or the like, or cutout dog figures. We saw some people, mostly kids, trotting off with their paper-lantern pigs. But we waited for the variety show to be finished before going to the crafts, and there we discovered that everything was done. It was all wrapped up, put away, and gone. Only a couple people playing Chinese checkers were still hanging around. It was a bit disappointing to have nothing to show for our visit except the actual experience of having been there.

We'd had loose plans to go to a movie in the evening. But by the time the show was done and we looked outside, it was snowing rather heavily. Given the circumstance we decided it wasn't worth trudging through that, and instead we watched our first Blu-Ray on that new player. Watership Down, which I hadn't seen in decades. It turns out the movie reduced me to a big quivering, blubbery mass of flesh, and that was before even the title credits. The whole movie was even harder.

Trivia: The Anglo-Dutch Convention of 1901 specified the waters off Iceland, up to three miles from shore, would be open to the world for fishing. Source: Cod: A Biography of the Fish that Changed the World, Mark Kurlansky.

Currently Reading: Eclipse: The Celestial Phenomenon That Changed the Course of History, Duncan Steel. Huh. So the number of times we can be certain someone observed one planet passing in front of another? One. (This doesn't happen very often. Even one planet grazing the limb of another is amazingly rare.)

PS: Proving That Disturbing Triangle Theorem That Isn't Morley's Somehow, in which you get to enjoy my expository powers.

PPS: a Michigan's Adventure photograph I didn't mean to take. 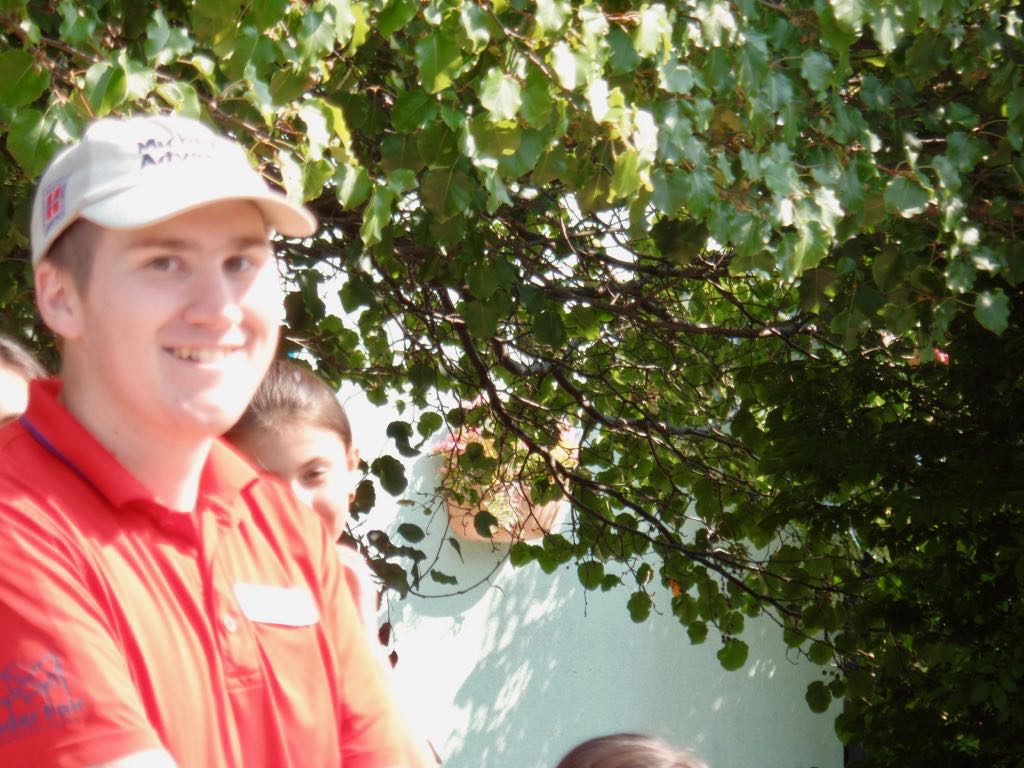 I wasn't trying to photograph the operator of the Flying Trapeze ride, but he spotted me and smiled for me and at that point it seemed a pity to waste his sociability so here you go, whoever you are. 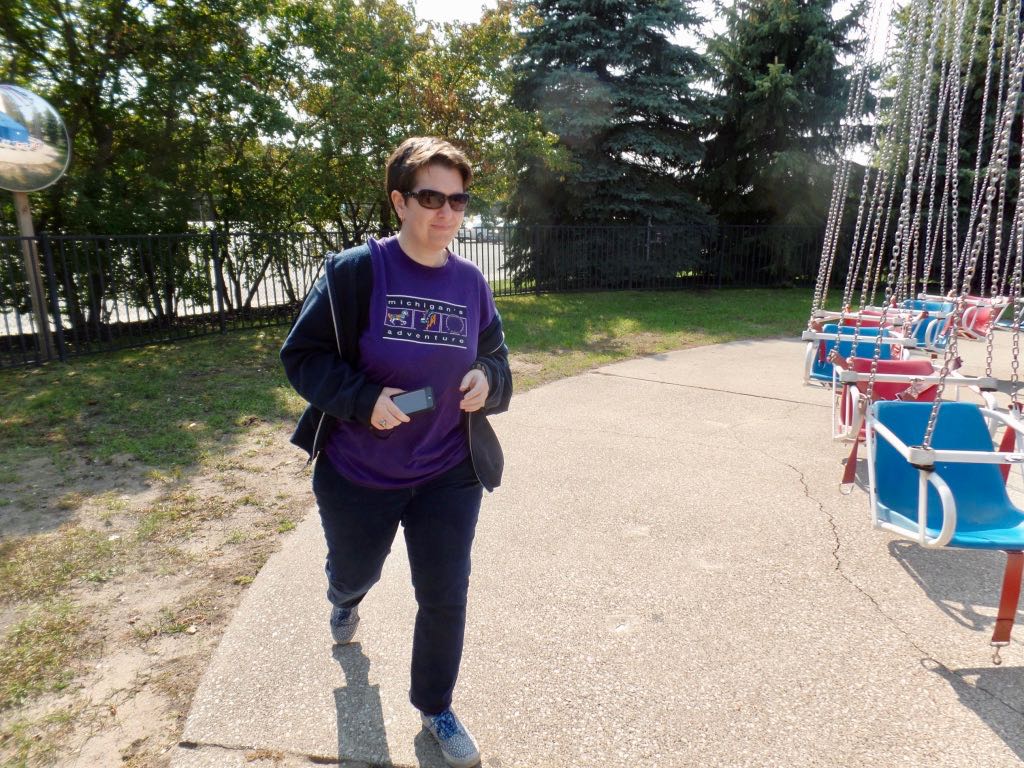 What I was trying to photograph:

bunny_hugger strutting her way after getting a picture in the safety-inspection mirror on the left of the frame there. 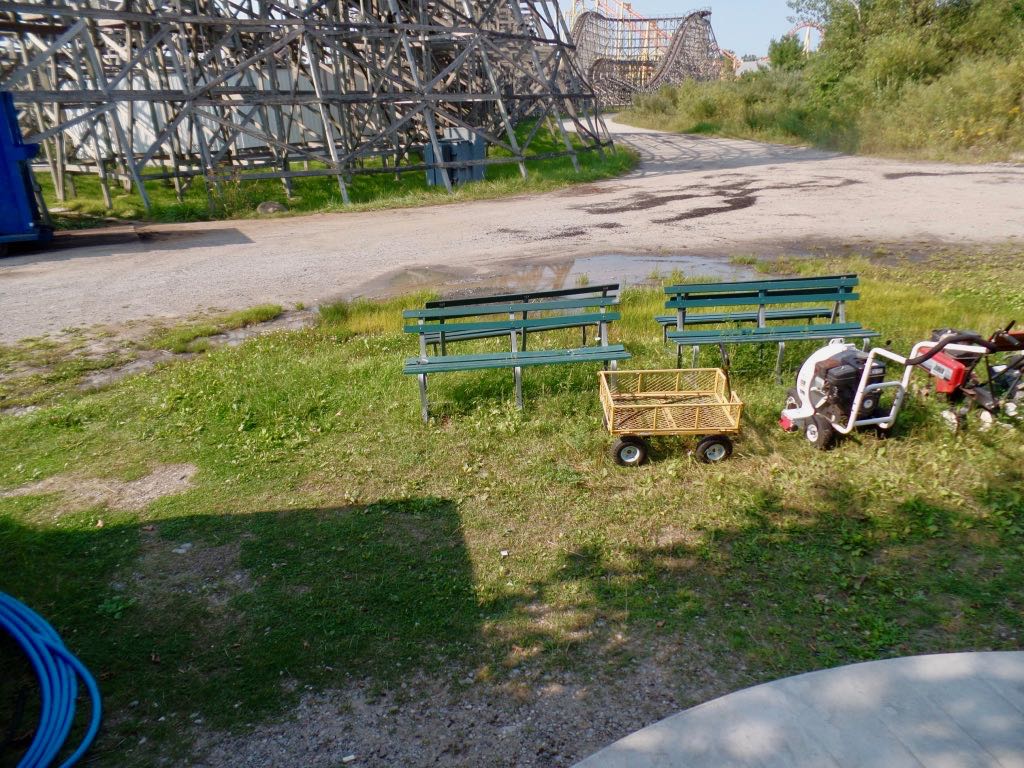 Broken-down and very old park benches in a little working area outside the publicly-accessible portions of the park. The wooden roller coaster in the background is Wolverine Wildcat, the near-twin to Knoebels' Phoenix roller coaster.