We have new neighbors. The house just south of ours, that had been owned by an absentee landlord and went on sale last fall, and that prompted us to finally build that fence we'd been thinking to do for ages, sold. It sold maybe in October, but nobody was there. There was some cleaning-out, and in December I even saw someone raking the dead leaves off the lawn, but there weren't signs of people. The last few weeks, there've been people.

We haven't met them yet. Ours is, admittedly, not a very social neighborhood. But also the weather has fought against it. There's not much reason to just hang out in the cold, the snow, or the snowing cold. We've had a bunch of snowstorms, but many of them have been, like, an inch or less. When you can go out and literally use the push broom to sweep the snow up, you're done in ten minutes and can miss your neighbors altogether. The neighbors have not been as good as I have about cleaning the full sidewalk off to dryness, but almost nobody on the block is. There's, at least, a reasonable clear path if you don't have mobility issues, which is better than the previous neighbors had done.

This is not to say we're thoroughly happy with the new neighbors. They don't seem to have been told about stuff like the trash collection and recycling schedule. Trash is picked up here Monday, Tuesday, or Wednesday, depending on which trash company you've contracted with (it's Tuesday if you go with the city trash). Recycling is alternate Tuesdays. I fully understand people not understanding this if they haven't had it explained in print. I don't blame them hauling bins out to the curb and hoping for the best.

bunny_hugger with a passion I admit I don't share or quite fully understand. Except that we got a substantial snow, and the car sat there, in front of our house, ready to block the snow plow in case they did plow our street. (Ours is a tertiary road, meaning we get plowed the third day after the third storm of the third year after the last time our street got plowed.)

So at the risk of seeming like a passive-aggressive noodge I wrote a note. By hand, in the hopes of seeming less bad. I tried to make it nice, welcoming them and saying I'd wanted to let them know it's not actually legal to park this side of the street. And that it's easy to not know that; the no-parking sign that had been nearest to the house was lost when the street lamp next door got knocked over by an errant car last year. And that parking on the wrong side, while not likely to get ticketed, will mess up snow clearing just in case it happens. And that if a car's left that side of the street it makes life harder for the garbage collectors, and might keep someone's trash from being picked up at all. I swept the snow off the car, so as to do them a legitimate good deed, and left the note in a plastic bag under their windshield. The car didn't move for another two days, but it did disappear after that and I haven't seen anything parked on the wrong side near us since then.

I also added a PS about when the next recycling pickup would be, and explaining it was alternate Tuesdays after that.

Still haven't met them, but I'm hoping we can be on good terms.

Trivia: The first large land grant to a railroad in the United States was in 1851, Illinois offering 2,595,000 acres to the Illinois Grand Central Railroad if its charter terms were met. Source: The Story of American Railroads, Stewart H Holbrook.

PS: Reading the Comics, February 16, 2019: The Rest And The Rejects, another handful of comic strips to discuss. 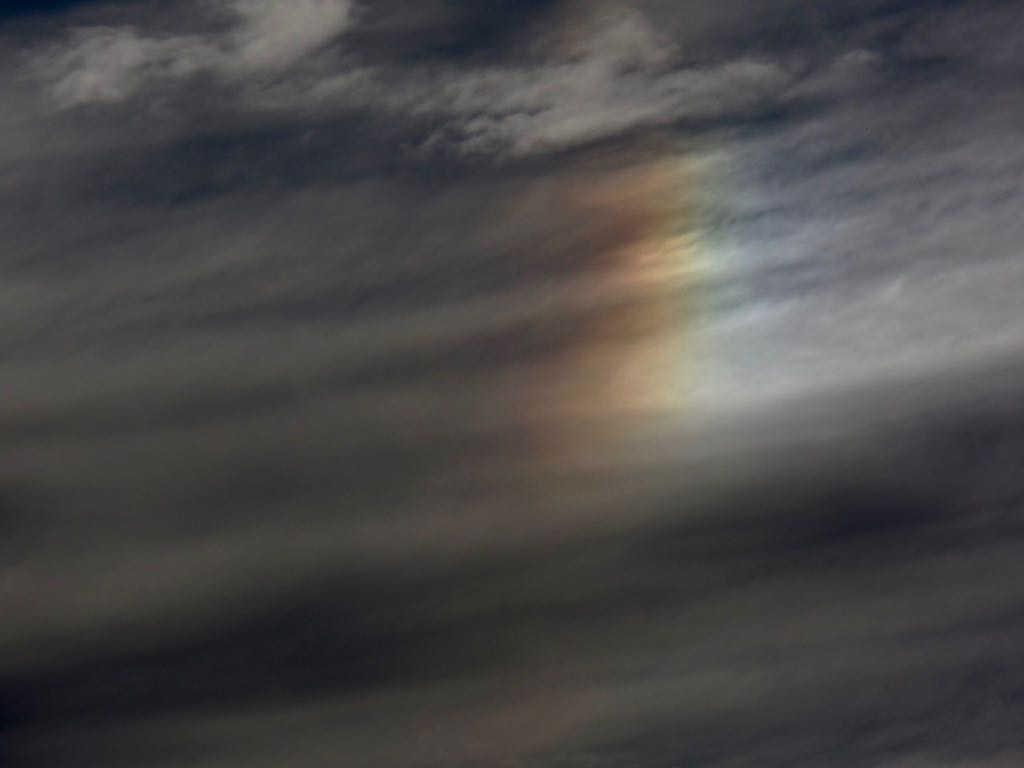 Curious atmospheric phenomenon that we've seen there several times: a little chunk of rainbow in the clouds. This, I think, reflects ice in the atmosphere. It's particularly likely to happen (around here) in September afternoons and we've seen it several times now. 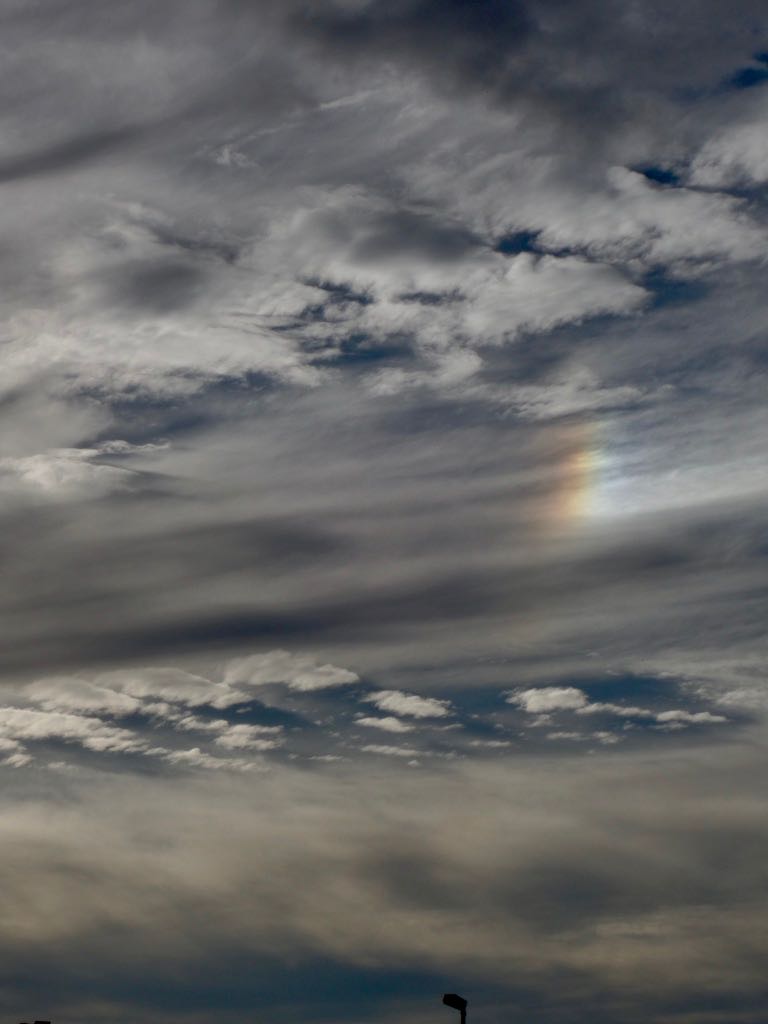 There wasn't much of this rainbow arc. This bigger view of the sky gives some idea how little there was but how neat it was to see and how much life it brought to the sky. 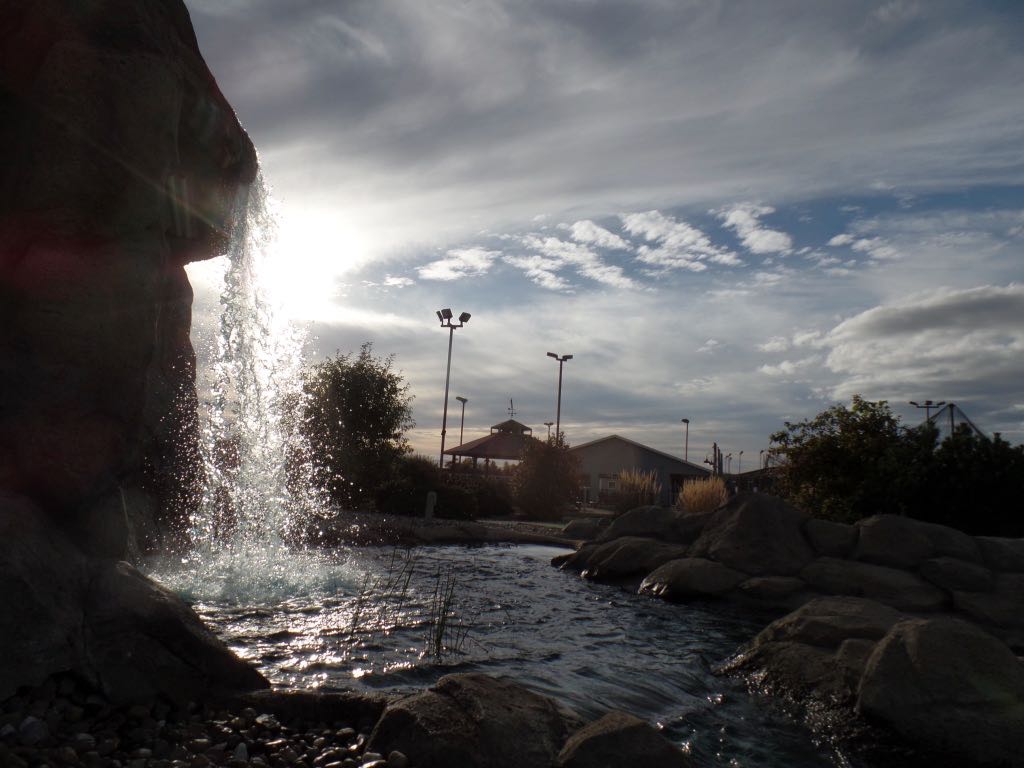 Waterfall attraction at one of the miniature golf holes. This was the thing I was paying attention to when we noticed the rainbow chip in the sky.