The stars at night

We haven't just been seeing movies in the theaters, by the way. With the new Blu-Ray set up we're finally trying to make good on our idea of having somewhat regular movie nights. So far we're ... well, two nights in, but that's like twice as good as we managed in 2018. We're doing these on Tuesday nights when we don't have pinball league, making popcorn, turning off the lights, and putting away the computers so we just watch a movie. So far we've been watching things we had on Blu-Ray or DVD. My first pick was Watership Down, mentioned in these pages a bit ago, in reporting on getting the thing set up.

bunny_hugger's first pick was a DVD she'd gotten while in Ann Arbor. She'd been to Ann Arbor for a medical appointment, and made a side trip to Encore Records, which had an alarming quote in the newspaper about the new landlord figuring there's money to be made in rebuilding and renovating and raising the rent. The spot has been a record store for decades (it was formerly Liberty Records) and goodness knows how long it'll be before the place turns into a twee restaurant.

But her pick. It was Pee-Wee's Big Adventure, part of her project to fill me in on the movies of the 80s that she can't believe I never saw. I can't quite believe I never saw it either. Or at least not more than pieces here and there. My sister (over Twitter) said she couldn't believe it either since it was on our TV often enough. Fair point, but I spent a lot of my teenage years trying to avoid my siblings, something I expected my sister to understand. She said she spent that decade wanting to interact with her siblings in some way that didn't involve hitting. I don't understand how that could even be.

I'm glad to say, and I suspect

bunny_hugger is relieved to say, that I really liked the movie. I had been worried I'd sit there watching a movie that's just nothing without the nostalgic charge. It has that absurdist, surreal humor that I do get into. It's likely that had I seen it in the 80s like everybody else my age I'd have loved the movie, possibly too much. Still I'm sorry to have waited so long to get around to it.

This coming Tuesday is a league night, so we won't have time to see anything. It's my movie pick the week after that. I've thought of what to watch.

Trivia: By 1890 there were still no railways connecting to any seaport from Johannesburg or Praetoria in what is now South Africa. Source: Fuelling the Empire: South Africa's Gold and the Road to War, John J Stephens.

PS: Here's some more pictures from Marvin's that October 2017 visit. 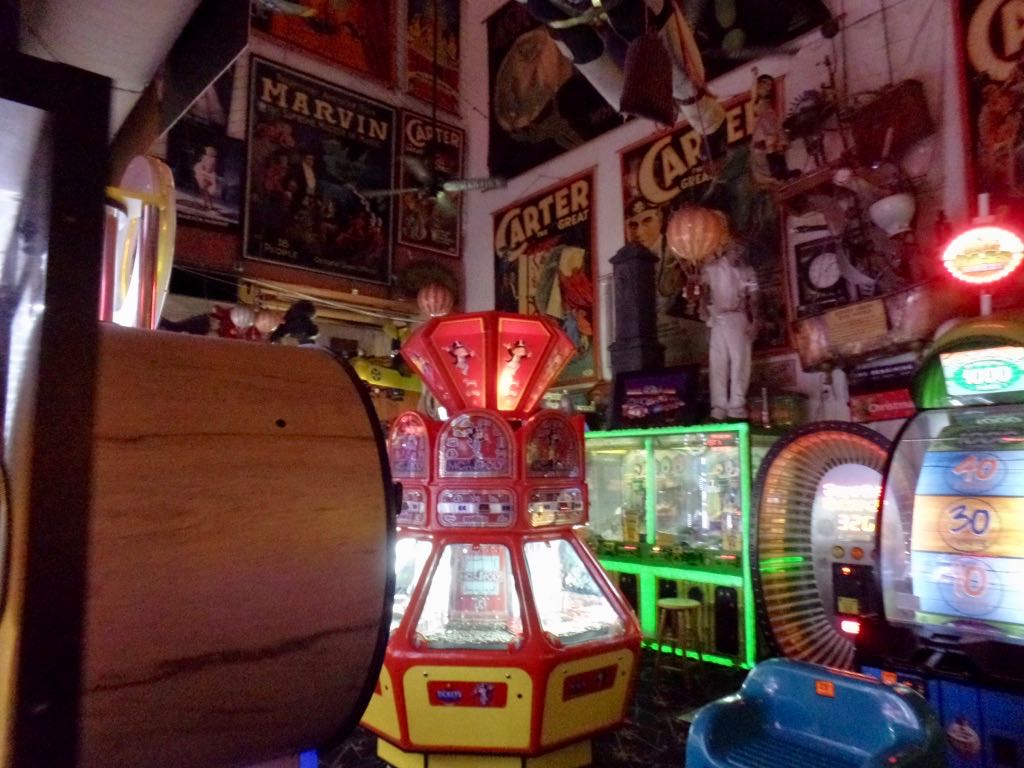 Yes, definitely the back corner of Marvin's, including one of those coin-pusher machines that somehow doesn't get busted for being gambling and aimed at kids. There's also a simulated jump-rope game, but really, the magician posters are the fun part of all this. 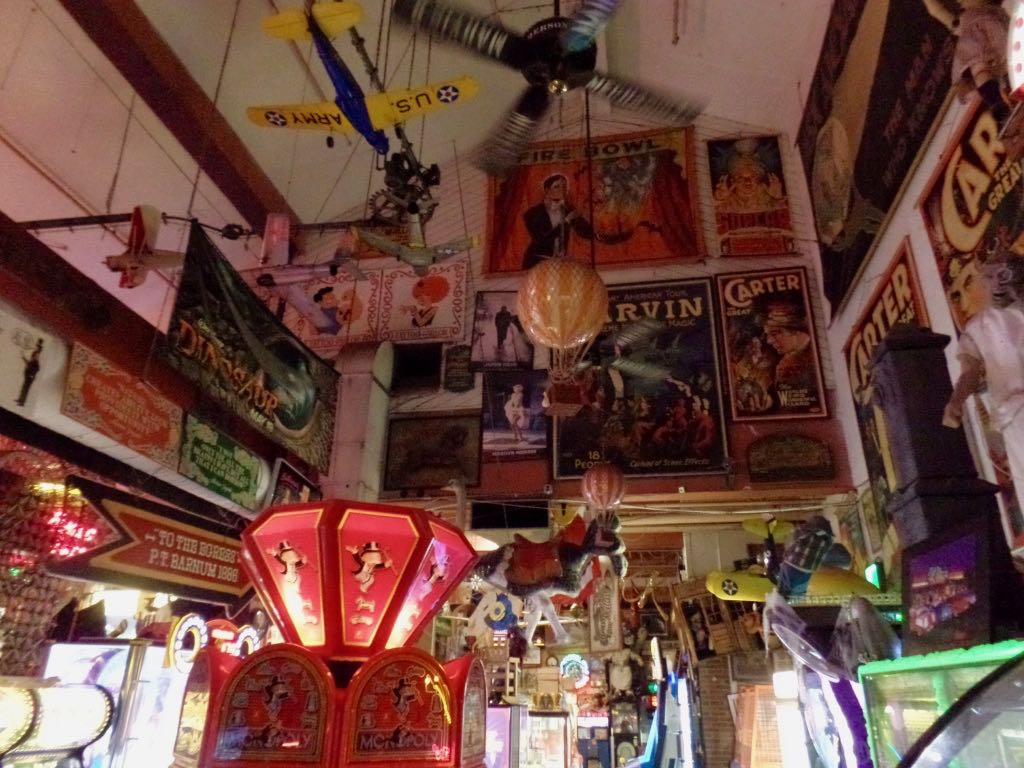 From the back corner and looking off in the direction of the Barnum Cardiff Giant, which is here hidden behind the Monopoly coin-pusher gambling machine. There's also that cute sign for ``To The Egress'', which points in no such direction here. It's pointing more towards the women's bathroom. 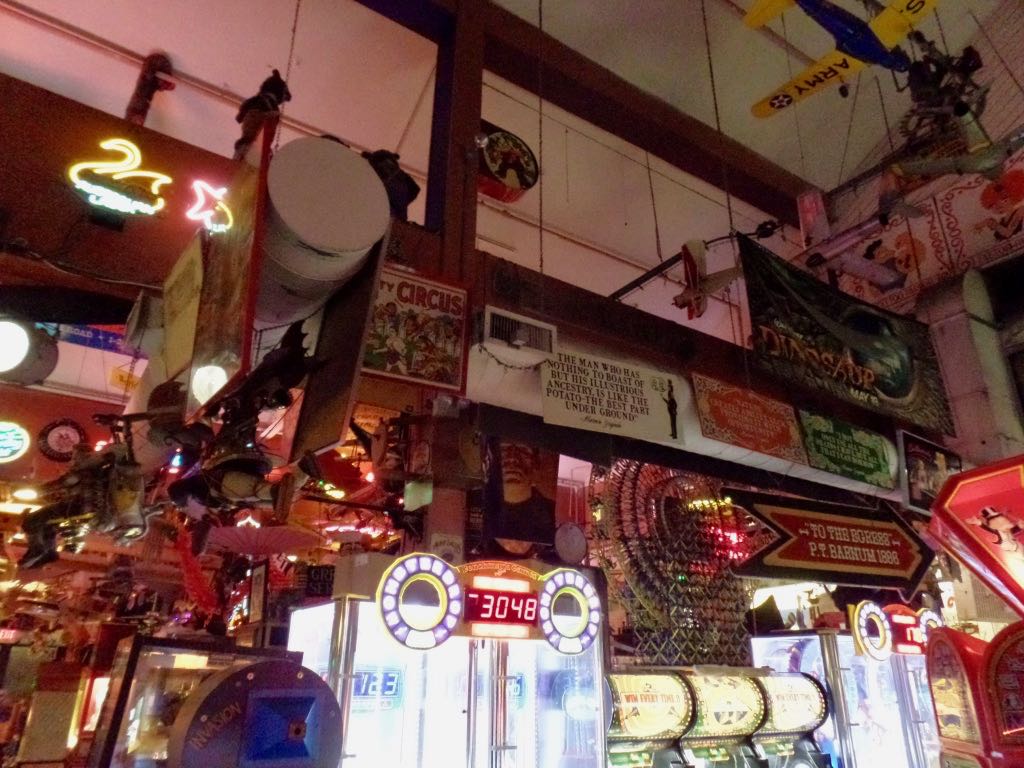 There's a couple of inspirational quotes hung up here. Also some kind of panels hug around a cylinder that looks for all the world like it should be a space-history exhibit of, like, the Apollo-Soyuz Test Program, but isn't. On the far right is a movie poster for Disney's Dinosaur, an animated movie I'm sure you all remember as ``why they decided it was better to have Pixar make animated movies instead''.