Looking for a way to escape

My mathematics blog gets a little needed love today. Here's my published writings from the past week:

And the story comics have a great and fun update for this week. What's Going On In The Amazing Spider-Man? Why did Mary Jane toss a sheet on the Purple Guy? November 2018 - February 2019 almost perfectly covers a full story that includes body control and a purple-skinned guy.

I'm going to finish off the Marvin's pictures here, but be warned: there's not many of them. You'll see. 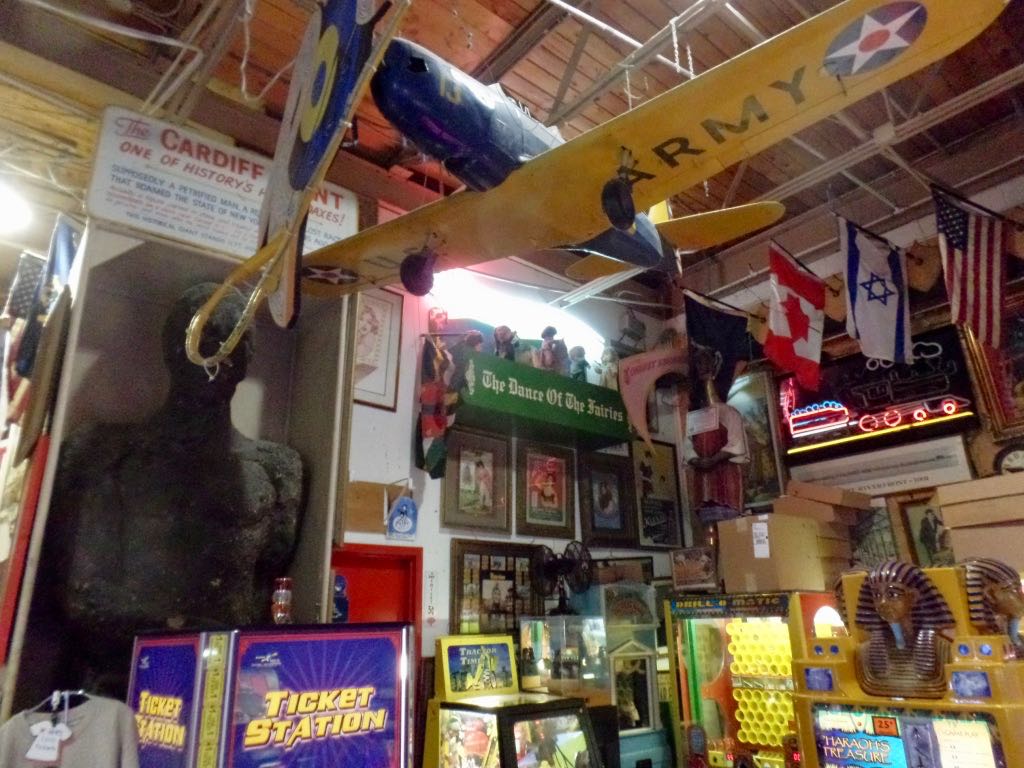 The Barnum Cardiff Giant, on the left, surprisingly well-obscured by a ticket-counted machine. The women's room is the red door to the right of that; above and to the right of that is The Dance of the Fairies, which looks like it should be a mechanical attraction but which does not to my knowledge move. 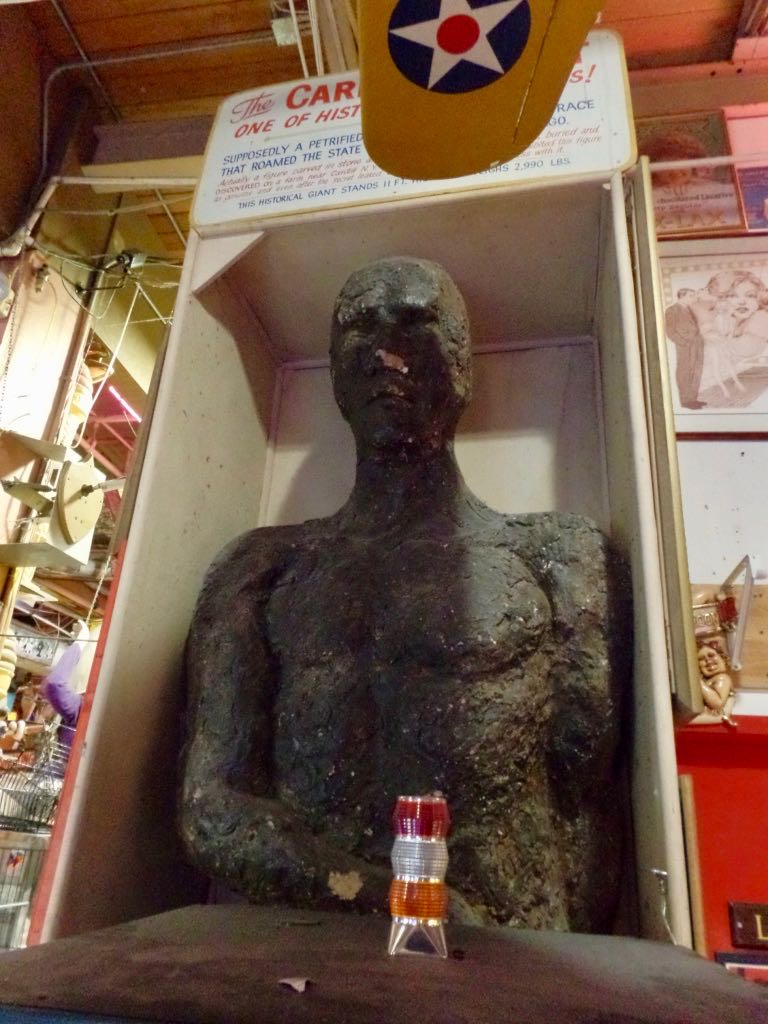 And a closer picture of the Barnum Cardiff Giant, who, based on the light atop the surface in front of him, is ready to ring in to the speed round on a game show. 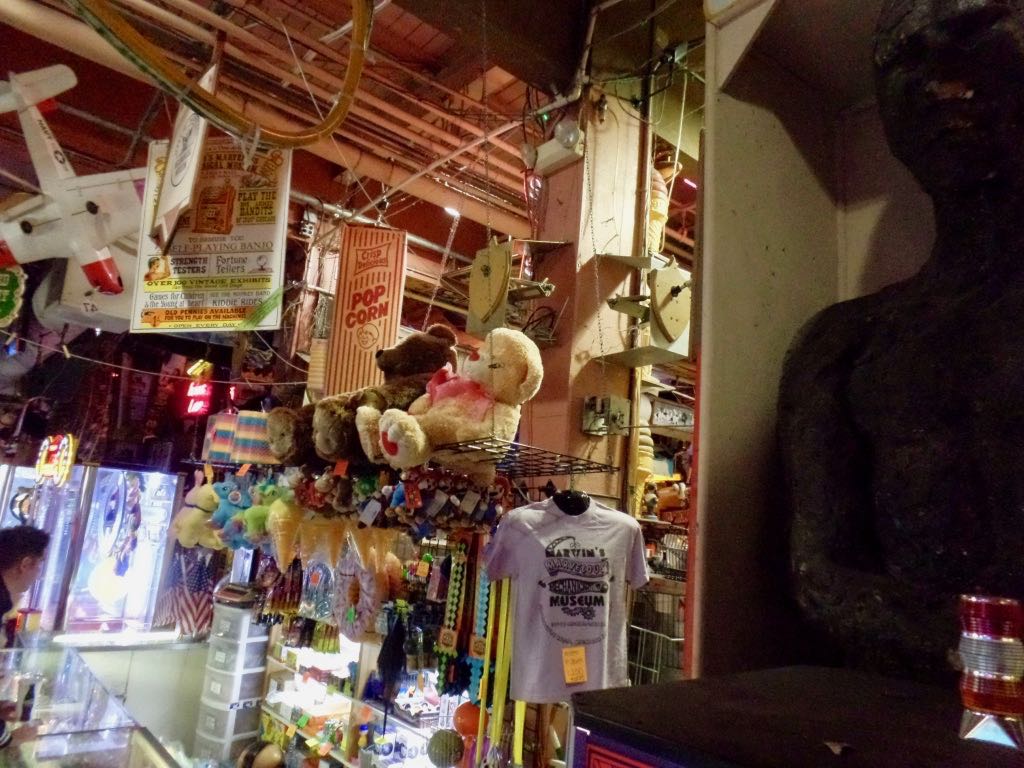 To the left of the Barnum Cardiff Giant is the ticket redemption counter. Just look at that heap of redeemable things. You need like 16,500 tickets to get that size popcorn free.

And that wraps up my good Marvin's pictures for that month. Next, some nature pictures: I want to share what our pond looked like, not least because we'd had that always-funny event of a rainstorm so heavy it washed the rocks out of our pond's waterfall. 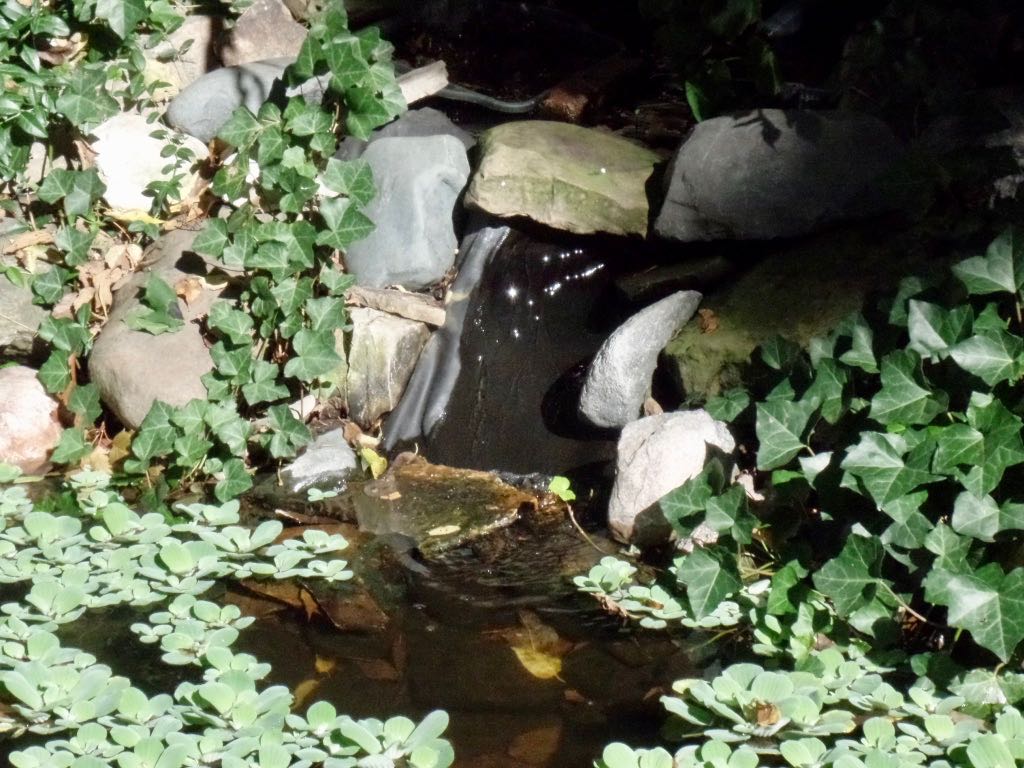 The rubber lining between the upper pond and the lower pond. There's normally a bunch of mostly flat rocks to break up the water flow and give it some definition. I photographed in the middle of the day so I don't know why the shadows are all the darkness of deep space here. 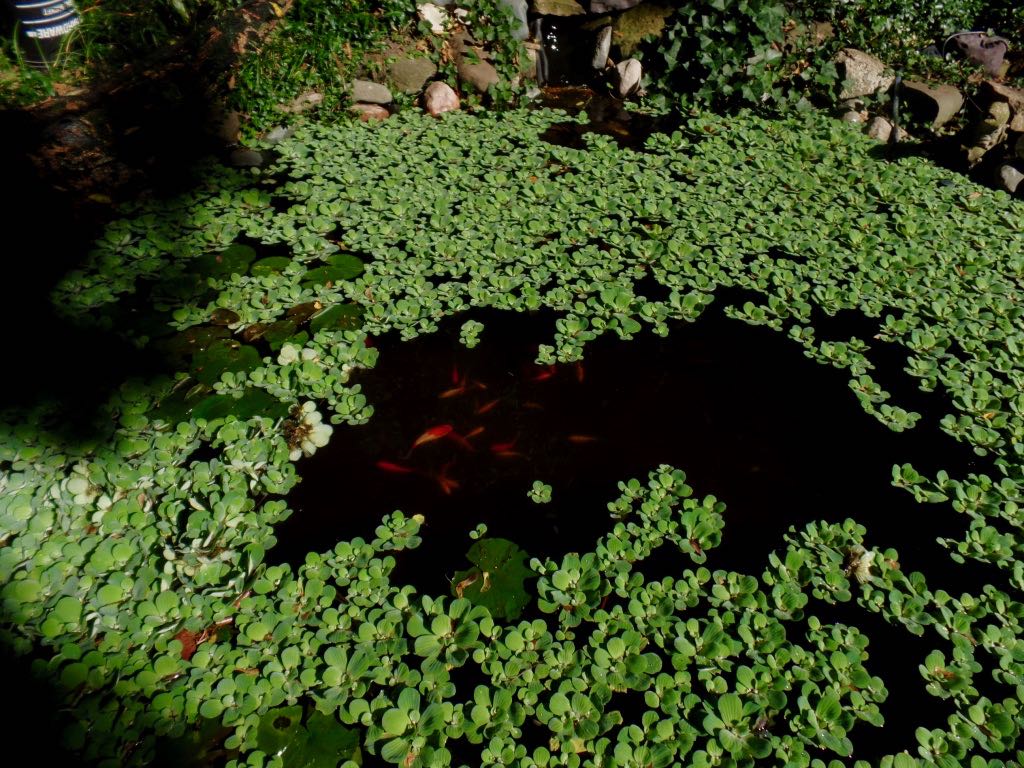 We had a great crop of water lettuce that year; all this grew from maybe like a half-dozen plants dropped in at the start of the season. The lilypads were also doing well, but didn't threaten to carpet the world like that. 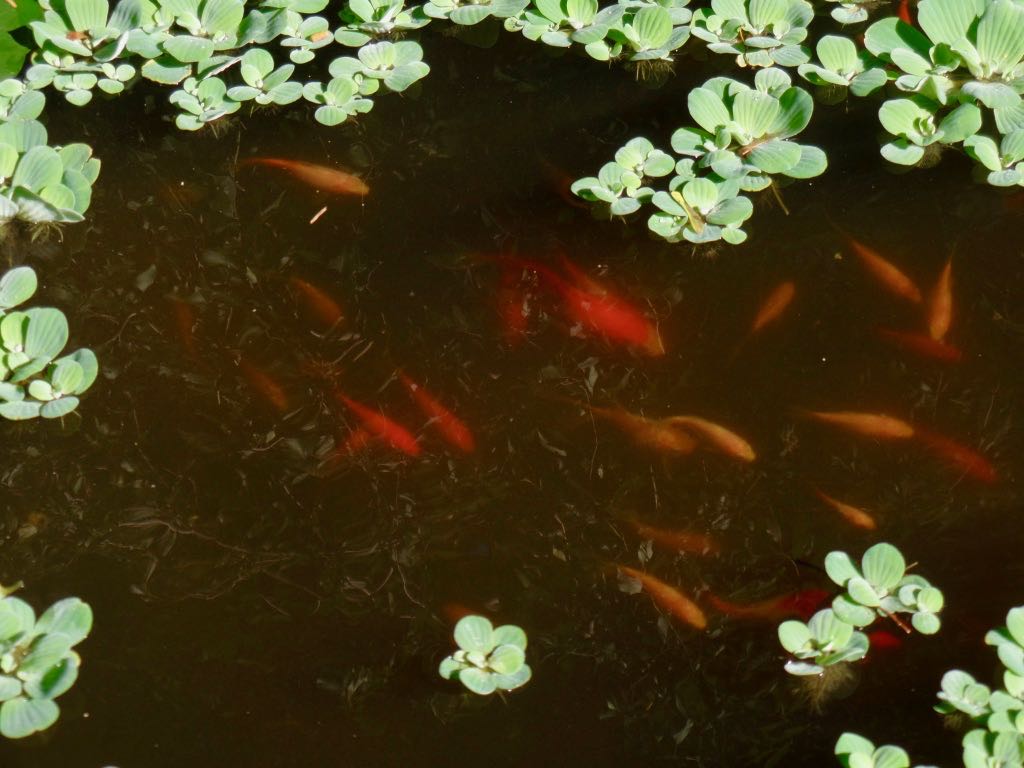 It's hard getting a photograph of our fish in the pond, but that won't stop me trying. Here you can see the record scratches on top of the water, too. 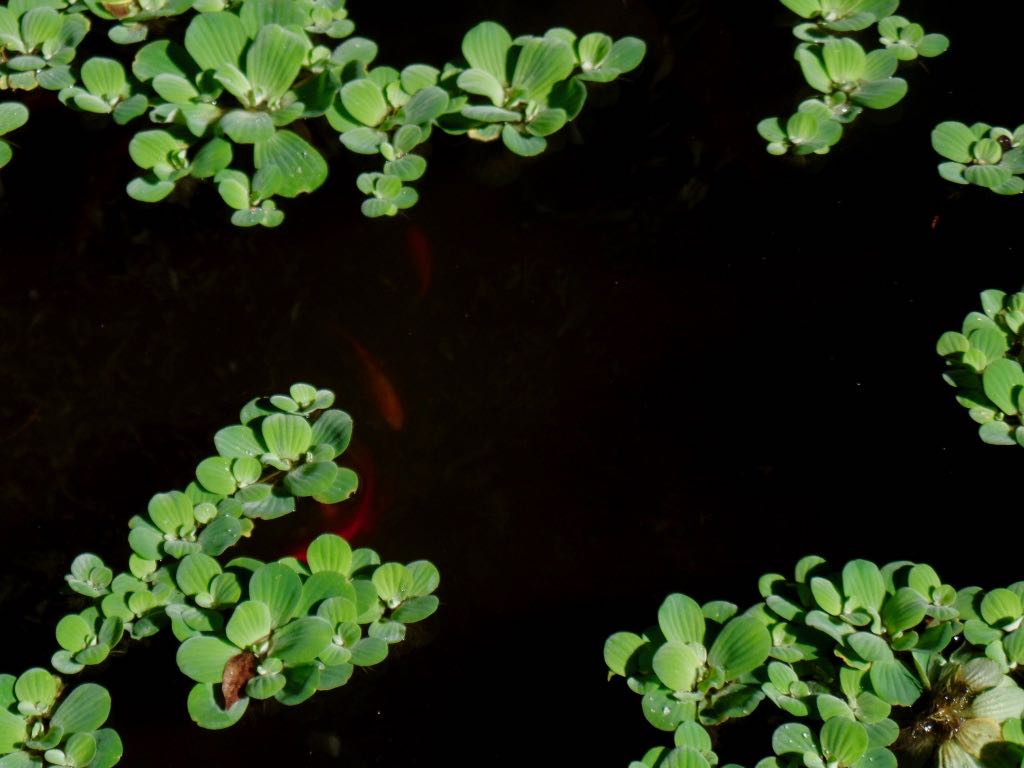 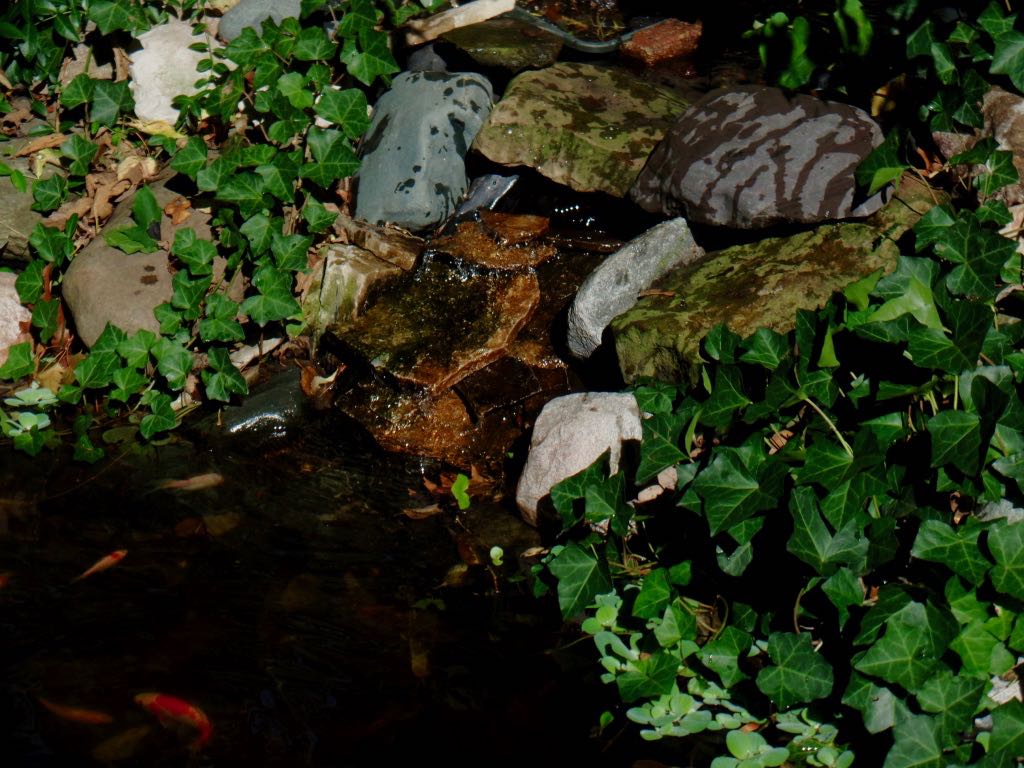 And here I've got the waterfall rocks put back together. The fish, enjoying the fresh-oxygenated water, will gather around.

bunny_hugger speaks of this as the fish ``worshipping the waterfall'' 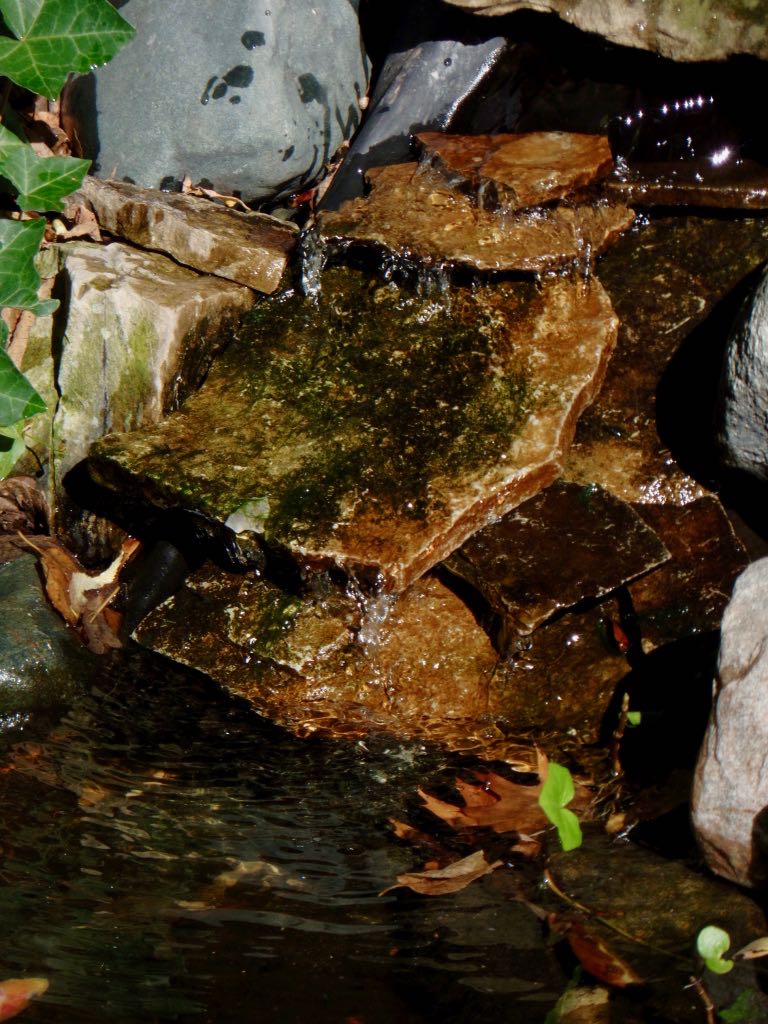 o/` Marshall, Will, and Holly/ on a routine expedition/ met the greatest earthquake ever known/ High on the rapids/ That struck their tiny raft/ And plunged them down a thousand feet below ... o/` Oh, and what the heck, an unrelated thing. Here's a picture from the inside of our pinball table, Tri-Zone. This is part of the mechanism used for drop targets. The big red slab is the part underneath the drop target and hidden by the table. When the ball hits the drop target, the electrical contacts like I'm pointing at break contact with a circuit board, making the whole fixture drop and score points. The contacts here are from a novel design experimented with then, and not made standard. But the contacts there are supposed to be on the end of a U-shaped clip. Here, clearly, in the past one of the legs broke off and the person just wedged it back in place rather than replacing the whole U-shaped clip, possibly because they didn't know where to find a replacement for the oddball part. Happily, we knew, and now this drop target works far more reliably. The little copper post at the right end of the red slab stops the slab from dropping out altogether; it's also grabbed by a solenoid to push the drop target back up, when that should happen.

Trivia: Boston's National League team in 1908 --- now the Braves --- was often called the Doves, a reference to owner George Dovey. Source: Crazy '08: How a Cast of Cranks, Rogues, Boneheads, and Magnates Created the Greatest Year in Baseball History, Cait Murphy.