They let us in so I'm feelin' alright

We are going to Pinburgh! Barring catastrophe, anyway. How we got in was exciting.

Pinburgh's the biggest pinball tournament of the year. It's held at the venue where Anthrocon is, a couple weeks later, so you can see Pittsburghers nosing around looking for anybody wearing a tail to be happy at. Tickets to it have been selling out riotously quickly. A couple years ago the 800 tickets sold out in minutes. Last year the 840 tickets sold out in fifty seconds. Many people from Michigan's competitive pinball scene couldn't get in.

bunny_hugger has never had trouble buying tickets before but this year, we got worried, even though they expanded the ticket pool to a thousand people. And we got organized.

Any person is allowed to buy up to five tickets at once, so we put together a pool.

bunny_hugger and I, plus MWS, and JTK and his wife, all hope to attend. So the first four of us were each going to try to reserve tickets and, once someone succeeded, the rest of us would back out. You may say this is the sort of behavior that creates a ticket rush, and you're probably right, but this is why no one person can check out more than five tickets at once.

We would get two chances. For the first time Pinburgh offered 'VIP' tickets, at a higher price but with a private lounge and sitting space. The fifty VIP tickets --- we can't help thinking of them as Sponsor's tickets to a con --- went on sale at 11 am Saturday. JTK wasn't interested in them, but

bunny_hugger and MWS and I were up for it. They cost more, but a ticket is a ticket. So we waited for 11:00 to roll around and hit refresh on the ticket-buying and ... they were sold out by 11:00:03. Good sign for noon, when the 950 remaining tickets would go on sale.

So we calmed our nerves and tried again and at 12:00:00 hit refresh on the ticket-buying page and ... we were all in. So now it was just a race to see which of us could enter all the relevant information --- names, e-mail addresses, International Flipper Pinball Association numbers, league affiliations --- and credit card information. And here ... nnnnnngh.

MWS's roommate K (with whom we've been to Kennywood) also joined in the pool and he was faster at entering information than the rest of us. This even though he was doing it on the phone whereas

bunny_hugger and I had, you know, computers with keyboards and all. All right. The thing is that he reported that he had all the tickets purchased and checked out before we were done. But we didn't get e-mail confirmation of this. Apparently he just put his e-mail address in for everybody, which I suppose saves time but did nothing to reassure me and

bunny_hugger that things were entered correctly.

We had a fifteen-minute window to finish the purchases and so spent nearly ten minutes trying to get confirmation, through MWS, through K, about what exactly had been purchased and whether it was correct. I was poised one click away from buying duplicate tickets myself for the five of us, right up until my session timed out. (You only get a 75% refund on unwanted tickets, and I was not going to eat a quarter of the cost of five admissions unless I had no choice, thank you.) But we finally got the receipts, relayed through MWS, to confirm that we have tickets and should be attending the pinball tournament.

We're among the fortunates. Also all five of us were officially listed as being with the Lansing Pinball League, in their for-fun roster of league affiliations. This is certainly correct for me and

bunny_hugger. It's fair enough for MWS, who's after all reigning league champion and not regularly attending anywhere else just now. JTK and his wife aren't playing anywhere and haven't played Lansing in a few seasons, though. But, K had to make a quick choice. And it's what I had pencilled in for the tickets I was ready to buy.

Some of the Michigan pinball regulars got in, too, like AJG. Some didn't: GRV and DAD and JRA missed their chances. I don't know about westsiders like state champion AJH or backup champion CST. I imagine I'll hear soon enough.

I don't know if there's been an official report on how long it took the 950 regular Pinburgh tickets to sell out. The number I heard tossed around was ten seconds. Ten seconds. This is plainly unsustainable. Clearly the only thing to do is cut Pinburgh down to 250 tickets, so that it'll take like five months to sell out and everybody can have a fair chance.

Trivia: The IBM 4 Pi computer units, used for Skylab's Attitude and Pointing Control System, were off-the-shelf units rather than custom builds. Source: Development of the Space Shuttle, 1972 - 1981, T A Heppenheimer.

PS: Oh, a couple miscellaneous pictures. Some from pinball league, some from home, just ... no big themes before I get to a big event. Can you guess what this big event is? Check your answers later this week. 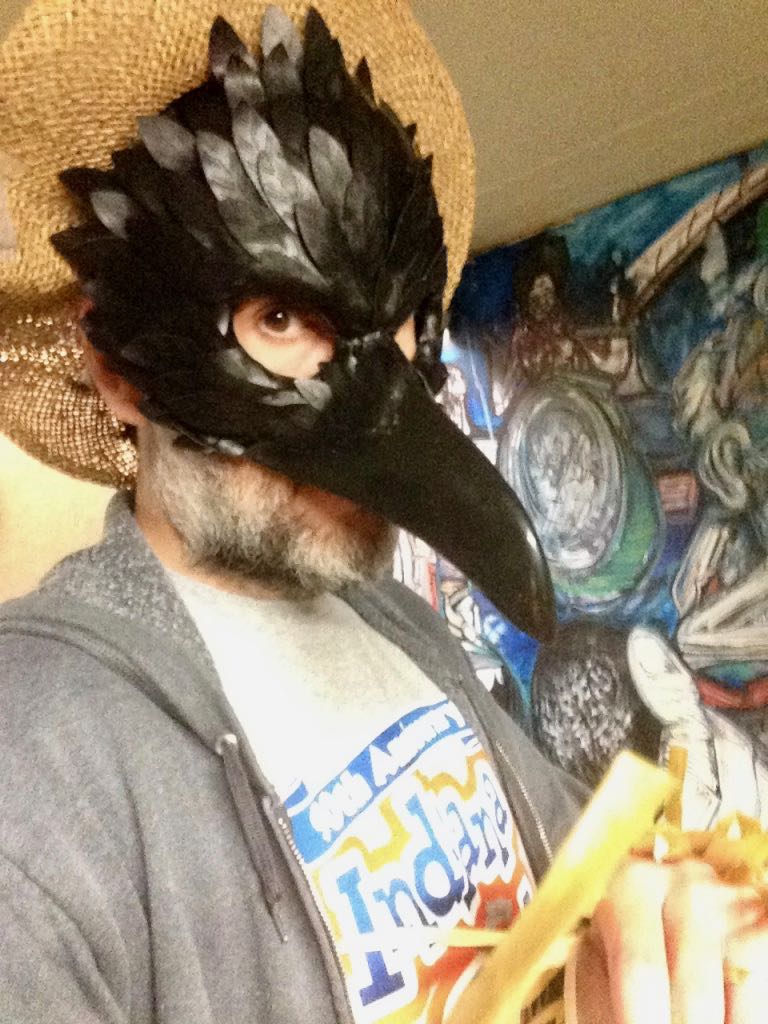 A rare selfie. My Halloween costume for 2017: a scare-crow. I don't know, I thought it was great. Like nobody got it. 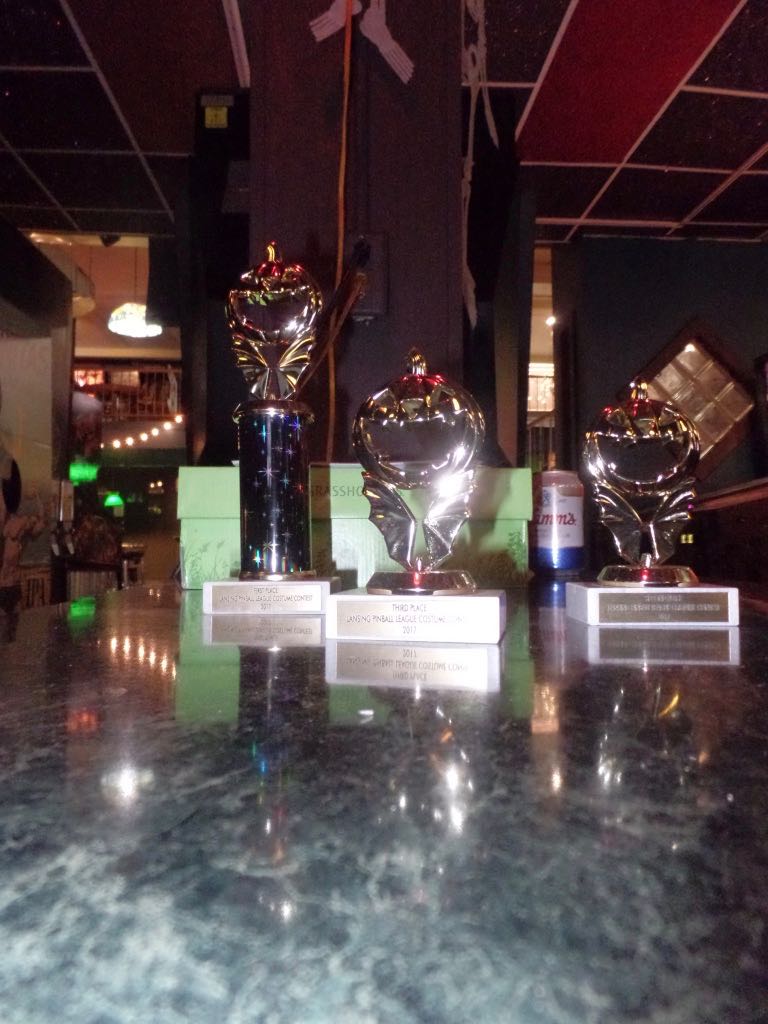 bunny_hugger bought them out of her own good money and from a catalogue company that sends her like four books of trophies to buy every month. 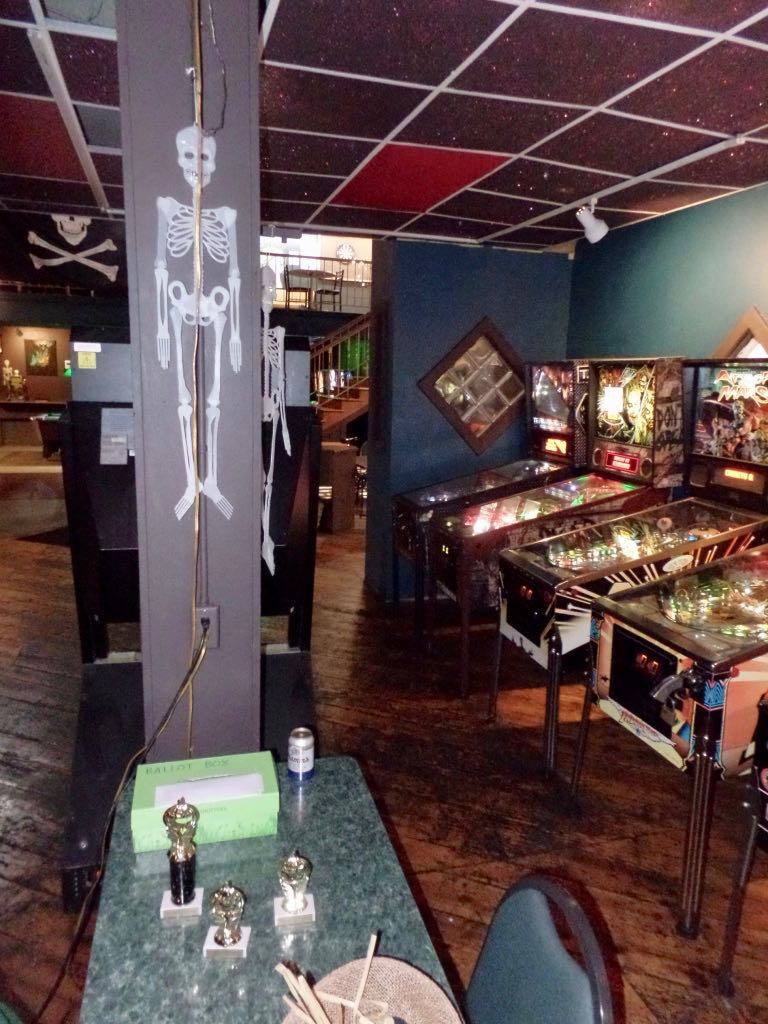 A little better view of just how not-quite-towering the trophies were. Also the alcove from which the Lansing Pinball League started. The far pinball tables there, Terminator 3 and The Walking Dead, have left the venue, and the Attack From Mars was replaced with a newly-made reissue version that plays much tougher.