You --- you know that life is terminal

Saturday was another day in the pinball mines in Fremont. Two tournaments, one for the Fremont Pinball League and one for the Monthly tournament. Both at the Special When Lit facility, where the state championship was held in January. These events used to be held in the Blind Squirrel Tavern and for most of 2017 and 2018 they had a nice easy low-key pattern to them. Six to ten of us would gather, and play five games for hours and hours and we'd come away having earned the ratings points that get us to International Flipper Pinball Association glory. That changed over 2018 and maybe changed forever with the championship hosting. A lot more people are showing up now. Fremont locals still show up, too. But the events are attracting more, and more skilled, people.

We're responsible for at least one of them. RED, who maintains the pinball games at the Lansing Pinball League's venue, finally carpooled along with us and MWS. He's quite good. So is MWS. With venue hosts AJH and PH there it'd take some luck to get to the final four, where the major points prize is. But what's there to do except play?

There was reason for hope, though.

bunny_hugger had the night before held her own in match play, direct head-to-head competition, in the highest-ranked group at Marvin's Marvellous Mechanical Museum, and that was a group with two people who're plausible candidates for next year's state champion. And me? I'm always optimistic. I had a less good night at Marvin's, but I did well after a rough start on the electromechanical game there.

15 people showed up for the League tournament, and 16 for the Monthly. We were not final four for either.

bunny_hugger had a particularly rough time, not making it past the first round in either. She did turn to me to demand, I just read that sports psychology book (The Inner Game of Tennis), what should she do? And I gave the advice of the book. She was playing Iron Maiden; what did she want to do? She wanted to start Mummy Multiball. OK, so visualize as perfectly as you can the exact steps you need to do to start Mummy Multiball, then, go up and relax and just let it happen. And, skeptical though she was, she did, and she started Mummy Multiball exactly perfectly. Unfortunately she didn't have a clear vision how to keep that multiball going long enough for the score she needed. But this precise step at least? That went great.

And me? ... Well, I forgot to bring my Reese's Pieces. Why does that matter? Because I picked up the habit of stepping away from the pinball machine after a bad ball and eating a couple Reese's Pieces. As with many sports superstitions, it kind of helps, even though I know it's a superstition. Doing anything that lets you feel like you're in control, weirdly, helps you get back in control. So without them, I'd have nothing to do but draw on my inner reserves to come back from a bad ball.

And I had bad balls. My whole game of Eight Ball, for example, where I never got the game under control. Or Iron Maiden, on which basically nobody but RED had a good game all day. But seriously, I needed to get 15 million points --- this on a game which can give you 25 million points for plunging the ball skillfully enough --- to win, and not only did I not, but I came in last place. The only finish that could possibly have kept me from moving on, one round, and even that needed other players to finish in just the right order. (We were playing in groups of four, so relative order on each of a set of games determined who would move to the next round.)

For the League tournament I made it to the second round, but missed by one point --- one better-place finish --- getting to the final four. For the Monthly tournament I didn't make it out of the first round, again missing by one point, one better-place finish. I did well enough in the consolation rounds --- took ninth place for the Monthly tournament --- and given how valuable those are, that's not bad. But we'll need to do better to be confident of rating for the state championship.

Still, there's some good in this. One is that, well, for all that the Fremont tournaments are attracting more people and better people, we're not sinking. Either of us were, basically, a whisker away from making it to the next round. And the tougher set of players going to these things means the events are getting to be worth more, even if they're not the low-key affairs they once were. Also, we're playing that well despite events being a little more serious.

Also regarding my play: I had some serious breakthrough moments. One was on Johnny Mnemonic, where for some reason I wasn't able to hit the ball-lock shots that I always go for. That's the easy way to score a billion points which will usually suit you very well. (The game is high-scoring; one billion points is a decent game and two billion points usually wins, unless you're playing AJH, in which case you don't win.) But nobody had the lock shot. I was able to find the orbits, though, the long arcs to the left or right of the game, and put together a first-place finish on that. Later in the consolation round I again wasn't having much luck with locks. But I aimed for, and started on purpose, Spinner Millions. This is a great mode that can build up hundreds of millions of points awarded as bonus. And, thanks to a bug in the code, awarded again, doubled, your next ball. The result is I had a six billion point game, my best ever, and close to

bunny_hugger's best game ever on that. Tossing my normal strategy out the window in favor of what's working at the moment? That's something I should have been doing at the state championship. I even beat AJH on the game.

And then another piece. Mystic. It's an early solid state game. It's an often brutal one. Drop targets represent the spots on a tic-tac-toe board; the more rows, columns, and diagonals you make, and better complete squares you fill, the higher your bonus. And that bonus carries over ball to ball, so if you have a great first ball you have already won the game. The catch is usually you have 19 lousy balls to one good ball. Topping 100,000 points means you've had a good game and very likely have won the group, in match play. The ball, particularly, tends to come out of the pop bumpers up top and drop right down a drain. Hitting any of the drop targets too hard also leads it to drain. This Saturday, though? I started patting the machine as the ball bounced around the pop bumpers, hoping to shake the table just enough the ball lost energy and dropped lazily onto my flippers. And it did, surprisingly often. In January I'd worked out a couple gentle backhand flips that seemed to hit drop targets without draining, so ... I had a bunch of good games. I don't think I had any game below 300,000 points, and I had two that were over 500,000.

Have I cracked the game? I don't know. But often when you have an outstanding game like that you go on to faceplant pretty hard, and here I didn't. But while anyone will have one good game on Mystic, having three good games in tournament --- and several more outside --- is just not something that happens. Maybe I've figured something. Or maybe I got quite lucky; that will also happen. Still, if I was just lucky, maybe this will encourage people to take me to less capricious games.

And KEC, a longtime Fremont player who goes to just every tournament she possibly can? She rolled Mystic, putting up more than a million points when the score display tops out at 999,990. She scored so many points that she actually lapped the other players: strike a million from her total and she'd have still won. Which was fantastic to see, and be able to congratulate her for. And it strikes me that when she got there earlier in the day she played a game of Eight Ball where the millions digit spontaneously lit. It's a glitch the game has, the result of someone retrofitting a seventh digit into what had been a six-digit display. She couldn't count that million-plus game for the seeding position it would offer. No matter. She got the million where it would do her more good.

bunny_hugger and I have never finished first in either, and we've only reached second a few times in the old, more casual days. As soon as the results from this post he's going to be high up in the state championship race for the year. Good for Lansing's reputation as having skilled players, bad for our chances to make championship next year. Hm.

Trivia: Railway stocks dropped more than 15 percent in the two weeks after the San Francisco Earthquake of 1906. Insurance companies dropped between 15 and 30 percent. Source: The Panic of 1907: Lessons Learned from the Market's Perfect Storm, Robert F Bruner, Sean D Carr.

PS: So, some Halloweekends stuff. 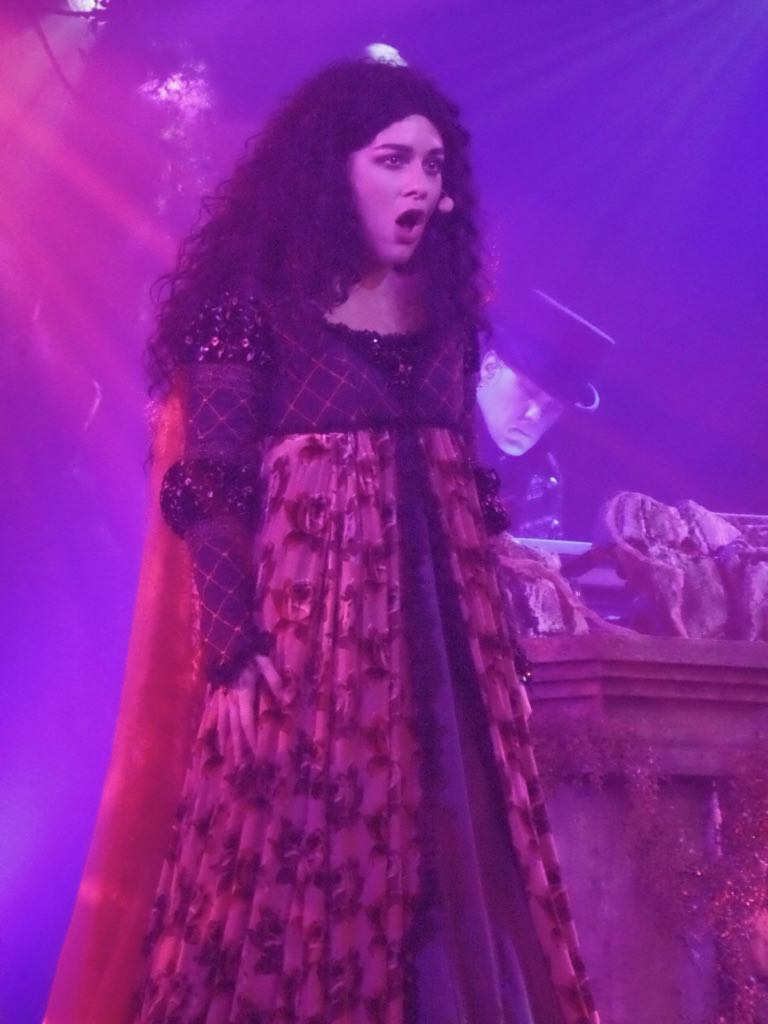 Singer for the Midnight Syndicate show. If I remember the framing device correctly she might have the reincarnation of one of the ghosts pursued by the ``Sandusky Area Paranormal Society'' members who prowled around the audience area until they came to a gruesome end. 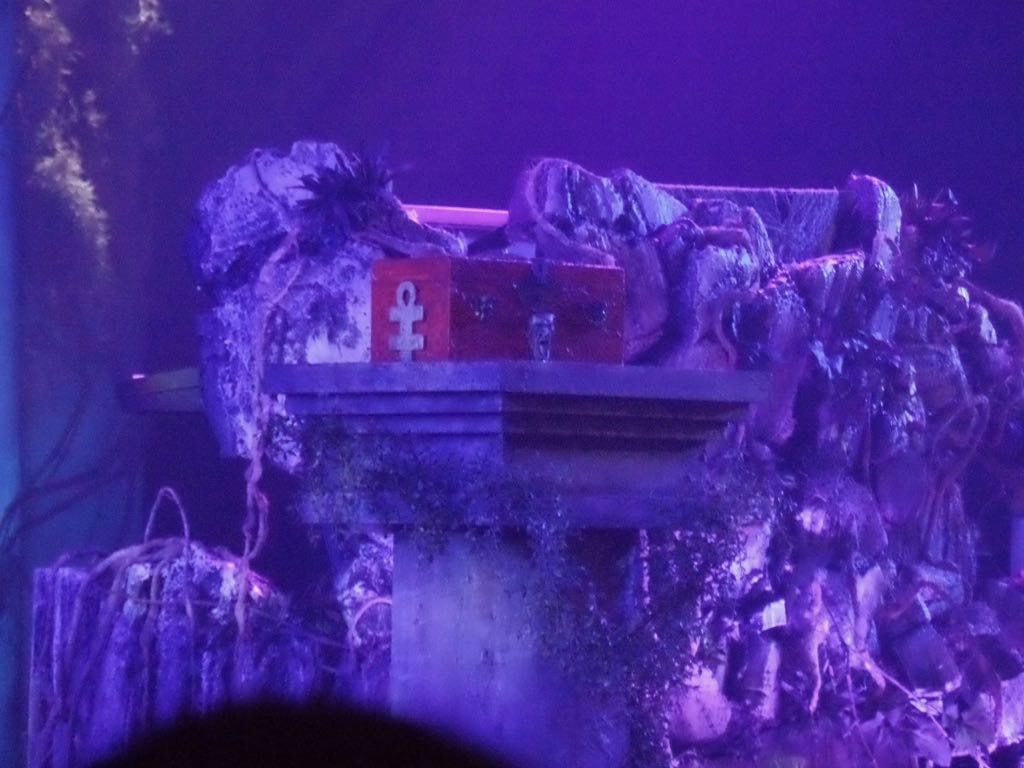 Mysterious treasure box and the pillar and fallen tree trunks and such. As the show went on video screens showed a paranormal investigator getting lost in the mystery of this box and pursuing it to Cedar Point, and this building, and banging on the door, at which point the lights failed in a supernatural explosion of energy. 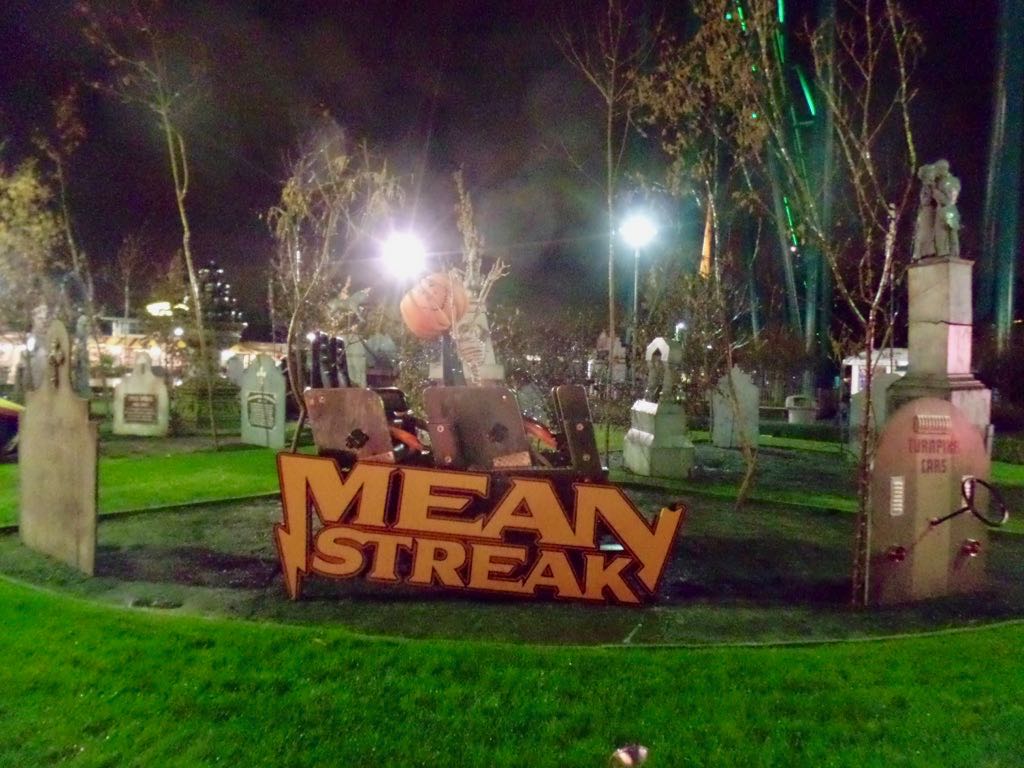 Rides graveyard. The sign for the former Mean Streak --- its successor hadn't yet opened --- along with a car from the train. To the right of it, the gravestone for Turnpike Cars, taken out a couple years ago for ValRavn construction.