I used to know this old scarecrow

It would be a fib to say we've been talking about getting curtains for the dining room since I moved in. It's only been since the house facing that side started getting lousy tenants. Ones who'd throw slop out the window, or leave garbage on the lawn in back. This has bothered me only slightly, since I mostly look away from that window. It bothers

bunny_hugger, as she faces that window and has to see, or be reminded of them, a lot. But the intensity of this has varied. When the previous tenants got less bad, like when the landlord put a storm window over the kitchen so it was physically impossible for them to toss out scraps, the urgency for it lessened. When the house got sold, and sat vacant for six months, the need all but evaporated.

It returned with the new tenants, who've left a heap of garbage from the house cleanout or moving-in in the backyard and don't show signs of throwing out enough of it to make a difference. So after years of dithering, this weekend, we committed to buying and installing curtains. The first attempt at this was a frustrating, indeed infuriating, series of discoveries at Bed, Bath, and Beyond, followed by Meijer's. We tried to find curtains short enough to match our 36-inch-tall dining room windows, and couldn't. And as the dining room windows that side are three windows, the outer two 20 inches wide and the inner 30 inches, we couldn't find screens narrow enough for the 20-inch windows. Also the shortest ones we could find were 60 inches tall, but that's something else to deal with.

So Sunday, after another round of pointing out measurements, and trying another Meijer's we found some 'short' curtains that are 36 inches tall. They're meant to be paired with valences, making us wonder how big windows are supposed to be in modern houses anyway. But we found some that were nice and lacey and matched the valences we already had, so bought three pairs and curtainrod and got them home. These proved to be too transparent for

bunny_hugger, as we could still see the heaps of trash in their backyard. So I went back to Meijer's and exchanged them for less matching, but more opaque, curtains.

Next challenge: hanging the curtain rod. We've got some very solid window frames. The first screw, done without a pilot hole, was probably not wisely done. I tried drilling pilot holes after that and only once got the drill bit caught in the wood. But, finally, we got the curtains hung. They're about three-quarters the way up the windows, so there's still light peeking through the top. It keeps catching me --- I notice the weird change out of the corner of my eye, as I sit at the dining room table --- but that's all right. We haven't worked out what we're going to do with the plants that no longer get the direct light from that corner, but we will. Nothing's ever a complete perfect solution without some other adjustments being needed.

Trivia: The 1924 election for judge of the eastern district of Jackson County, Missouri, was the only general election defeat of Harry S Truman. (The post was called ``judge'' but was an executive, not judicial, post; the eastern district was the part of the county not including Kansas City and its immediate environs.) Source: Two Americans: Truman, Eisenhower, and a Dangerous World, William Lee Miller.

PS: Now to a mere normal-size number of pictures of Halloweekends at Cedar Point from ... a year and a half ago. Mm. I maybe need a second account just to post these things. 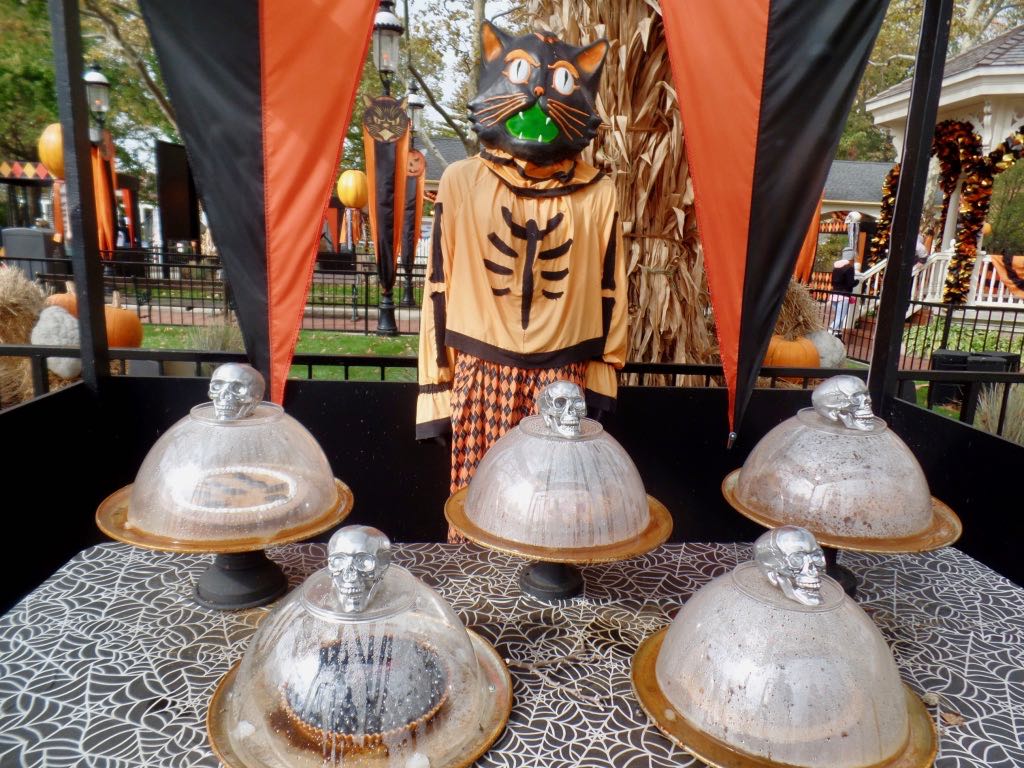 The County Fear's pie-judging contest which is either spoiled by the condensate that obscures what the pies were or is made by that because then you work harder to realize it's some ghostly haunted pies. Not sure what they were going for, or why it is so ... moist. 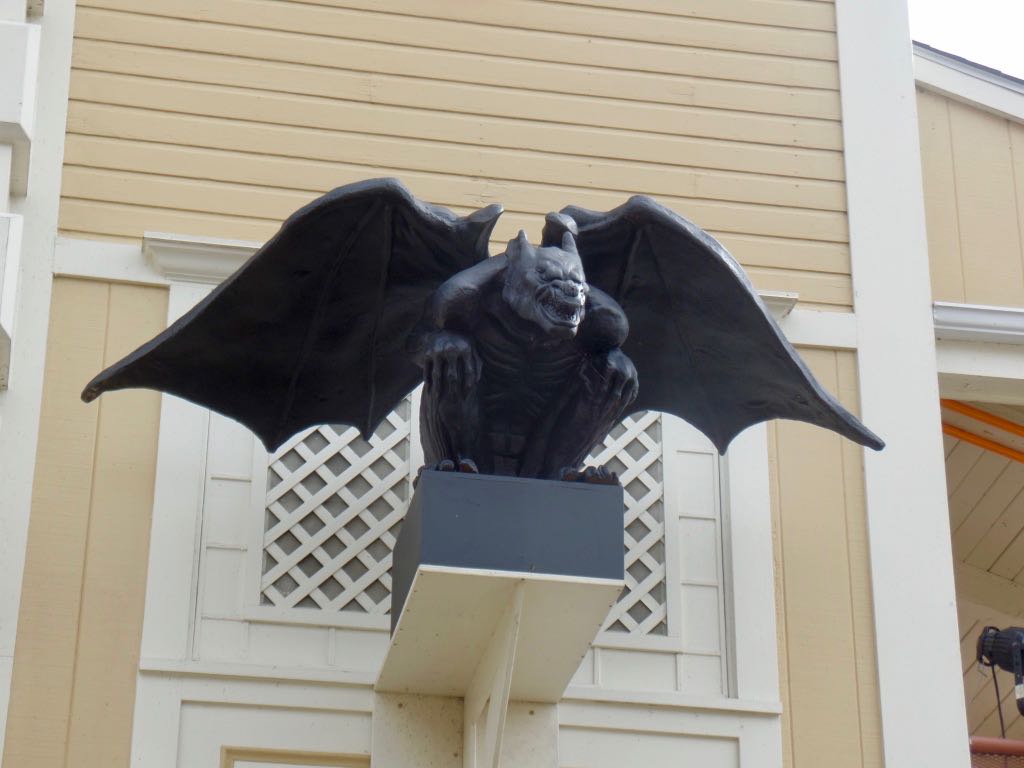 Gargoyle set up by the large building that's now, mostly, the bathrooms but at one time was also the receiving station for a skychair ride to the old-time-village area of the park. 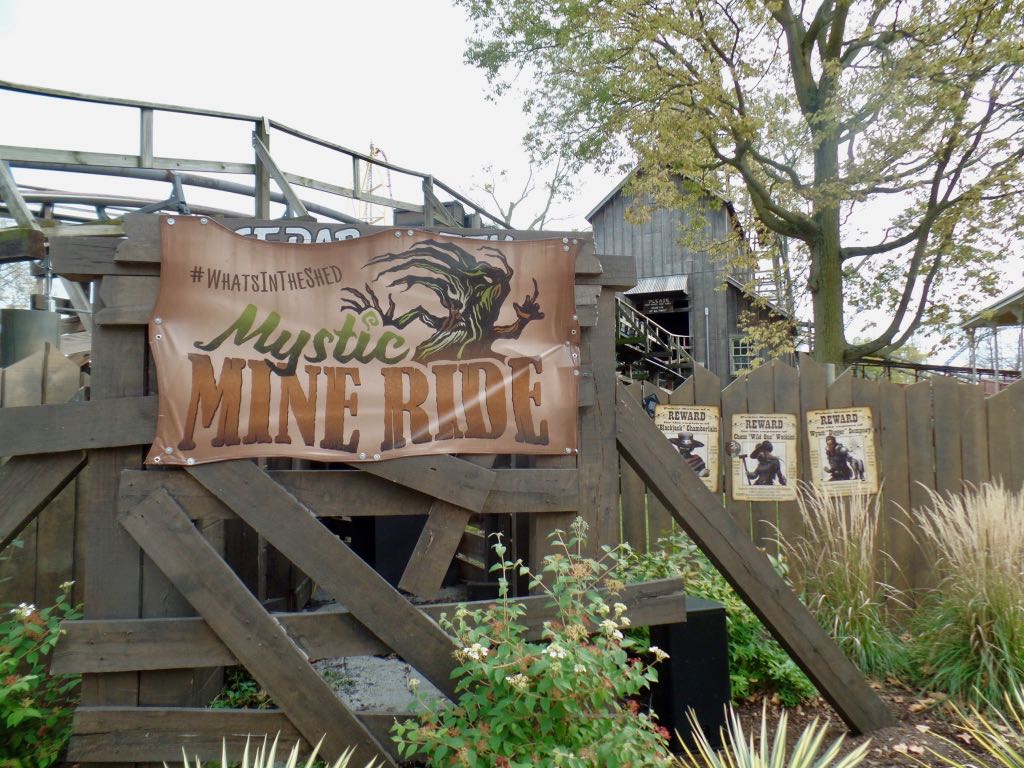 The advertising slogan for Kings Island's new-for-2017 Mystic Timbers roller coaster was ``What's in The Shed?''. The Shed, there, is a braking area where the roller coaster waits while the one in the finishes loading and dispatching passengers, but they've put some attractions in to give people something to watch while they're just sitting around. Cedar Point, sister park, dubbed the Mine Ride (adjacent to the County Fear area) as the ``Mystic Mine Ride'' and put up their own ``What's In The Shed'' logo to be a joke on this other amusement park that's on the opposite end of the state. The joke was surely well-appreciated by the people who knew what the heck it was and why it was even a joke.