The team below that gave the go, they had God's helping hand

Oh, and a little mystery around town. They've been putting up billboards for something called Lansing Ignite. From context, it's got to be some kind of sports team. What sport? I don't know. It doesn't say. They offer season tickets and that's about all there is to say. It's not a bad name. The Oldsmobile marque may be gone, and the General Motors plant might have moved to the suburbs, but Lansing is still a town that makes a lot of cars. They've gone over to Cadillacs, too, so Lansing makes cars the citizens of Lansing can't afford. This is what's known as a balanced local economy.

I assume it would be easy to figure out what sport it is by looking at their web site. Not sure, though. There've been a couple of models billboard over the winter and none of them have revealed much more than that there is a ball. Or at least a circular thing. Also a spark plug, done in that stylish anti-skeuomorphic design so it looks like an app's icon. Anyway looking it up is a bit more work than I feel like doing.

So then what? I can suppose that it's not a baseball team since we already have a reasonably popular minor-league baseball team. That we've seen circular logos makes football unlikely, even the Arena Football that a minor municipal region like Lansing might rate, if Arena Football is still organized. Minor league basketball, if there is such a thing, is also plausible. Soccer, maybe, which would fit the billboards appearing late last year and changing a little more often recently. Ice hockey seems possible but it also seems like they've missed the season for that.

Besides the Lugnuts lower-division single-A baseball team, Lansing supports a roller derby team. The Derby Vixens have been playing for ... I don't know. Years now. They've also got a Junior Vixens that I guess is the kids auxiliary. East Lansing also rates a roller derby team, the Mitten Mavens. I suppose it's possible we're getting another roller derby team in, but that seems like a stretch. Anyway they won't have a logo as furry-great as the Derby Vixens.

Trivia: One pilot worked on, but never completed, by Jay Ward studios in the 1970s was ``Ragnar the Chicken'', about a cowardly Viking too feeble to lift his singing sword; his nemesis would be Hanna the Barbarian. Source: The Moose that Roared: The Story of Jay Ward, Bill Scott, a Flying Squirrel, and a Talking Moose, Keith Scott.

PS: The end of the parade. 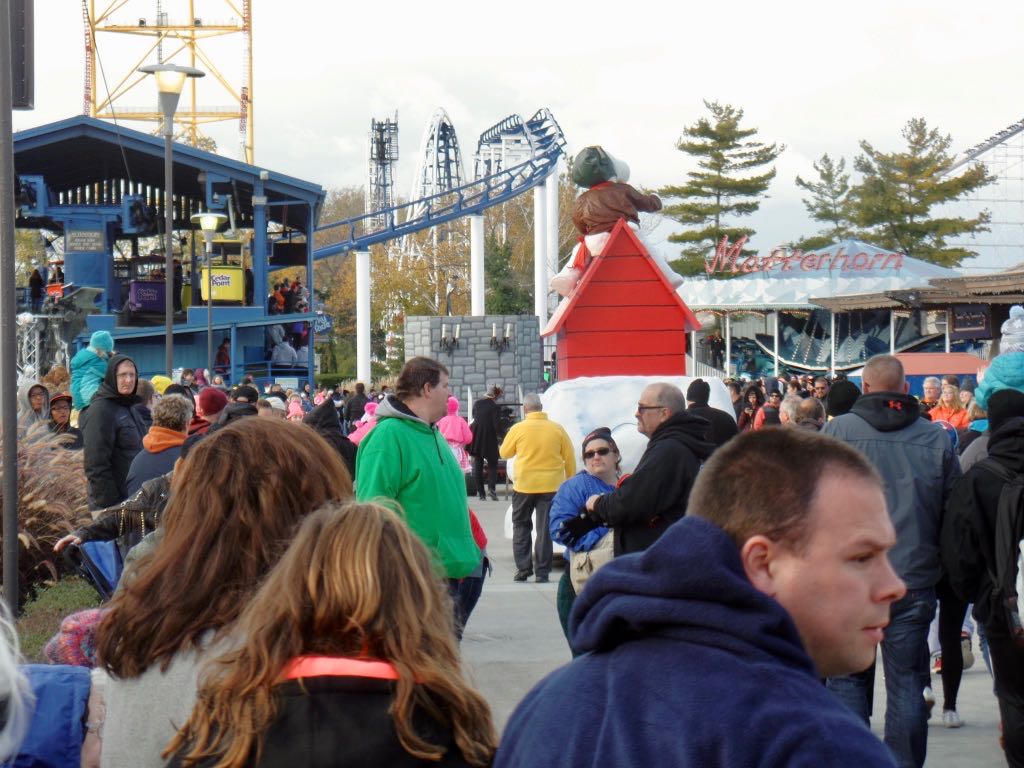 And the parade finishes with us, moving on as it does down the midway past Corkscrew and parts unknown to us. I believe the parade goes all the way to the back of the park near Gemini, but we're never too sure we've read the parade route correctly on the Halloweekends map so we always stick close to where we've seen it go the previous year. 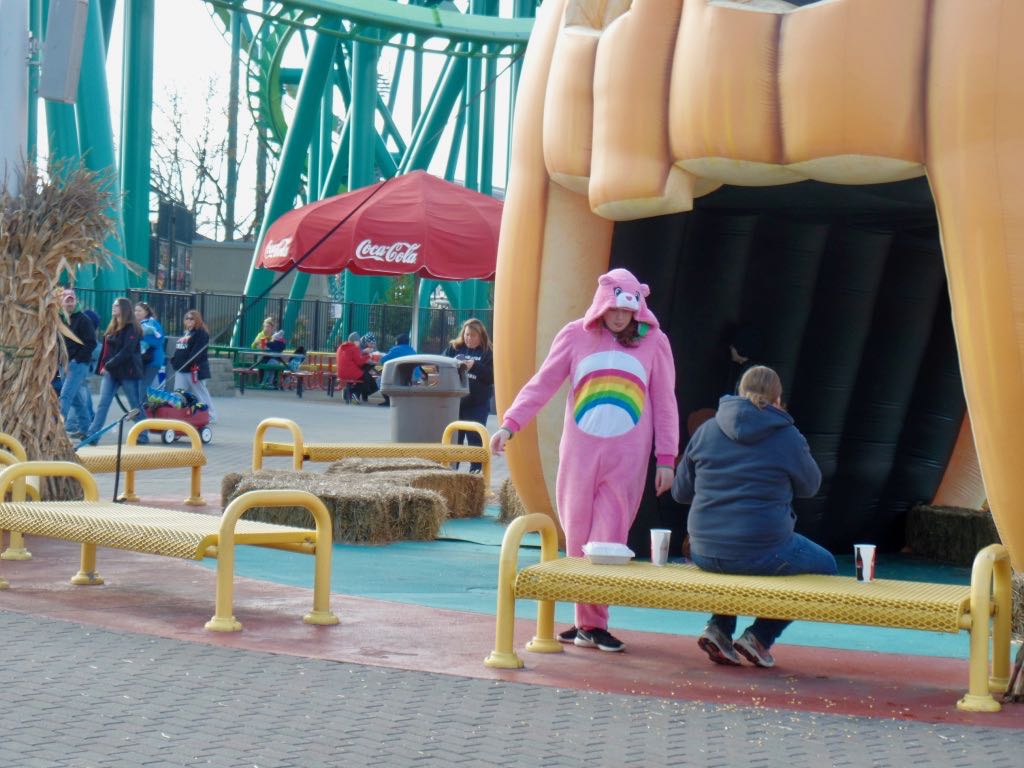 So it turns out you can just go to the park in your kigurumi, which is great. That should be pretty nice and warm. I'd be terrified of my wallet and camera falling out of the tiny pocket, though. 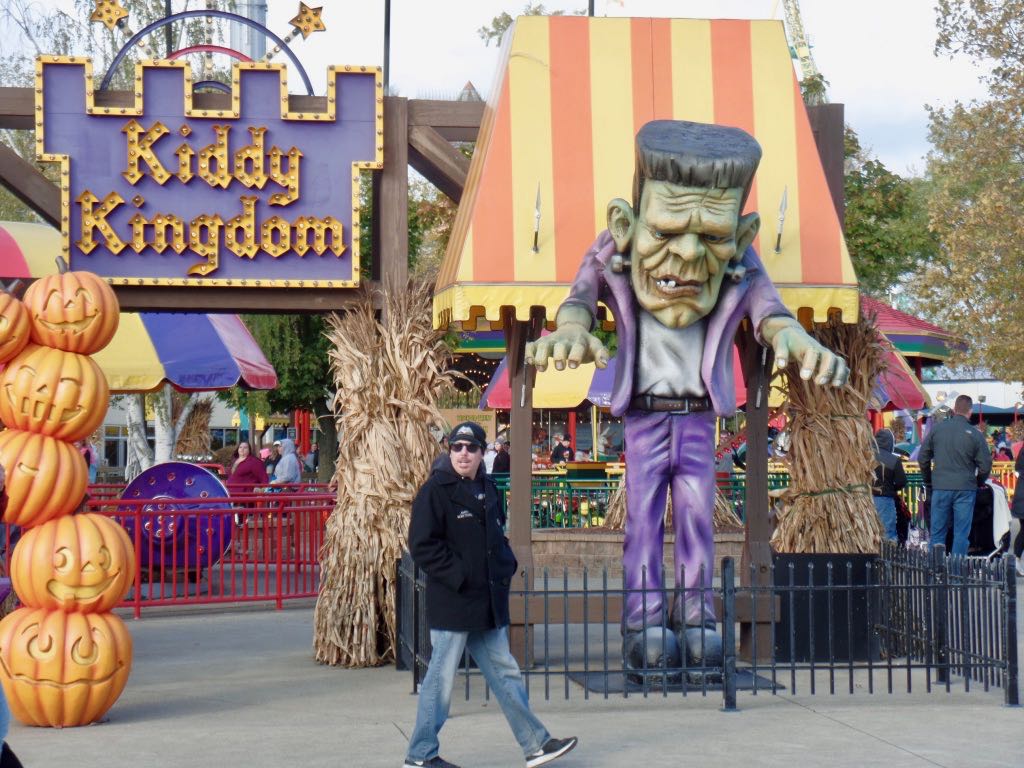 ``Huh ... wonder why all those people are shouting at me and pointing in my direction? Well, it can't be anything I'm doing.'' The Frankenstein sculpture here used to be part of a Halloweekends parade float, but it (and others) have been relegated to fixed display.