I lack the time to write anything today. Here's pictures from the 2017 Lansing Pinball League finals. This is not repeat not the one we were at until all hours last night. 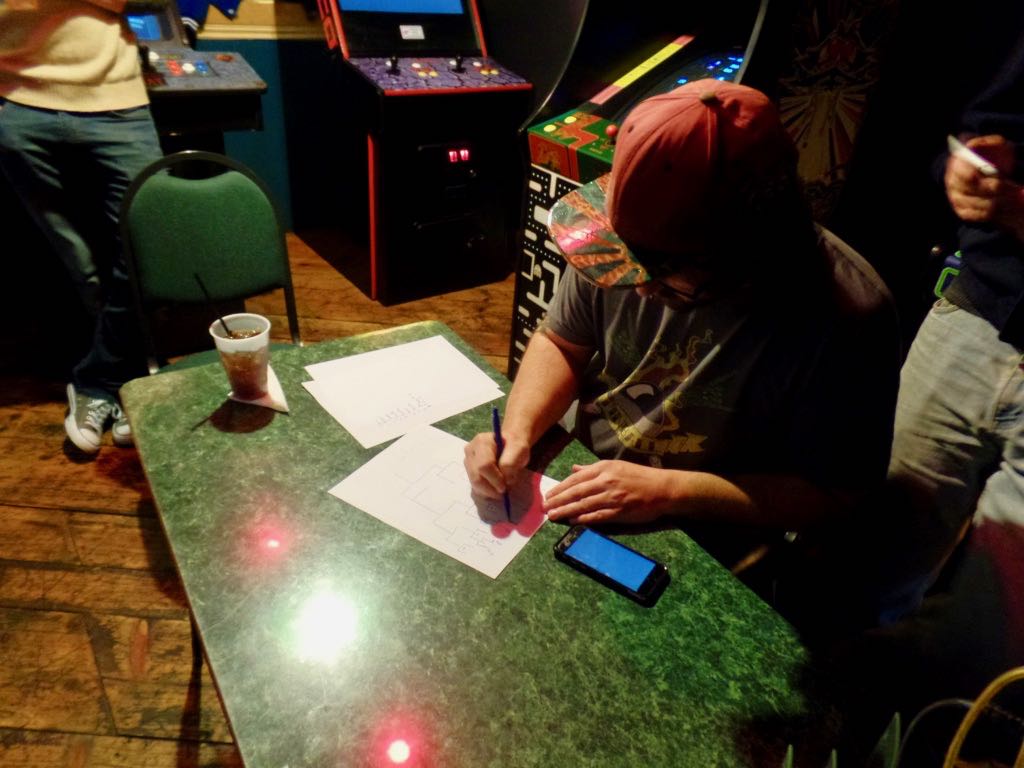 Organization! The tournament was double-elimination, so that you had to lose two rounds, each of them best-of-three, before you were out of the tournament. This involves a complicated bracket that you can get templates of online, and somehow, the number of people who show up is never in the range of brackets printed out and ready ahead of time. 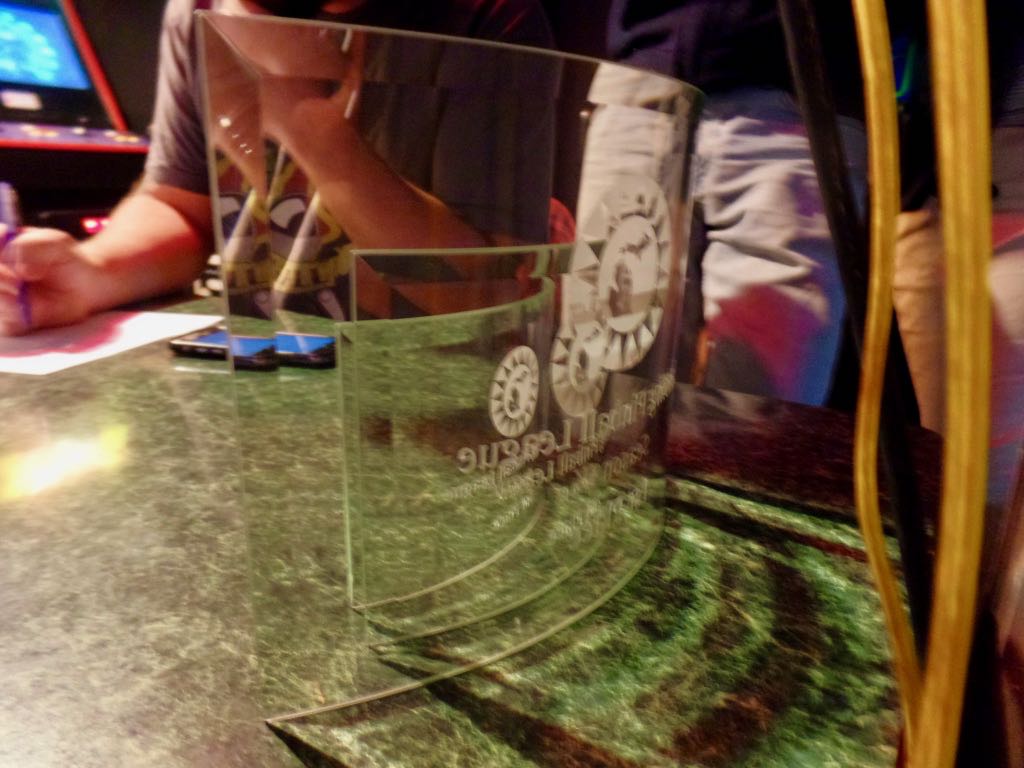 Why We Play: the three lovely glass etched trophies that are the signature of the Lansing Pinball League's finals. 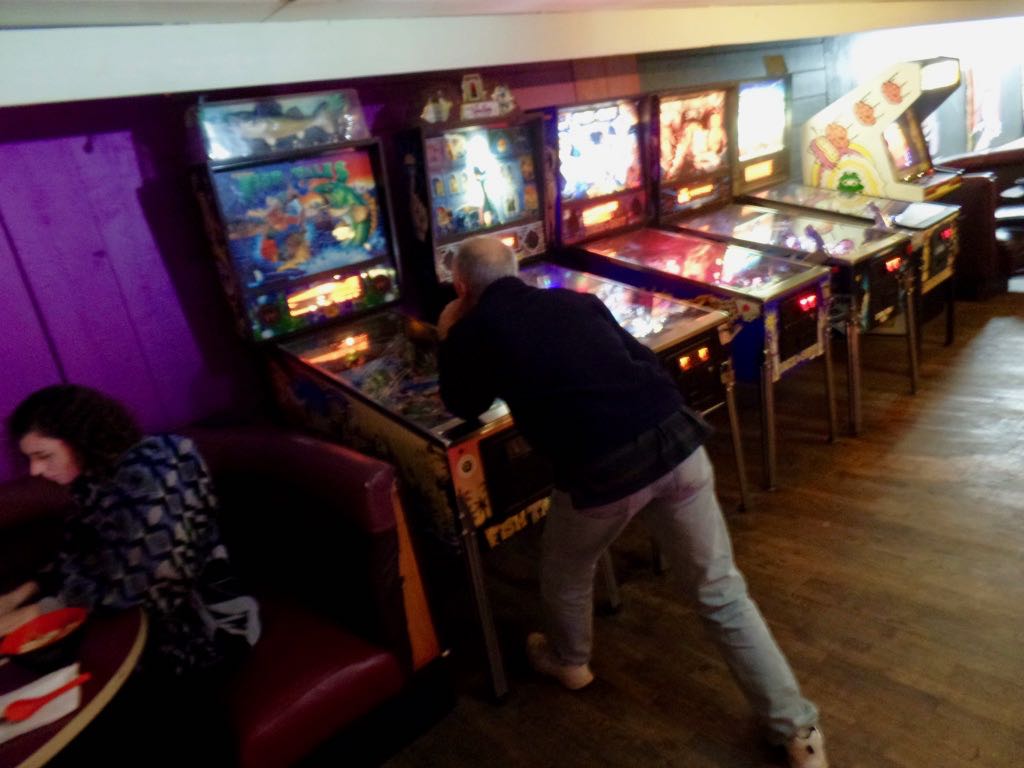 Somebody enjoying the video mode of Fish Tales, in which you shoot torpedoes at waterskiers. 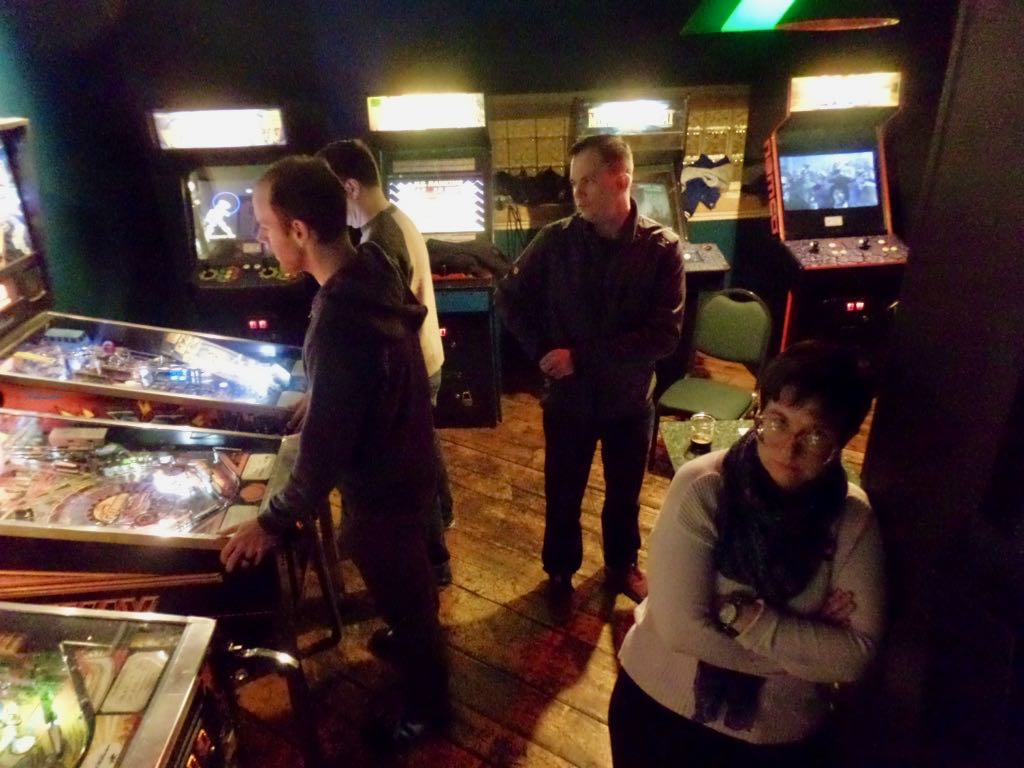 bunny_hugger expressing her feelings toward the person who beat her two games to three in the championship bracket. 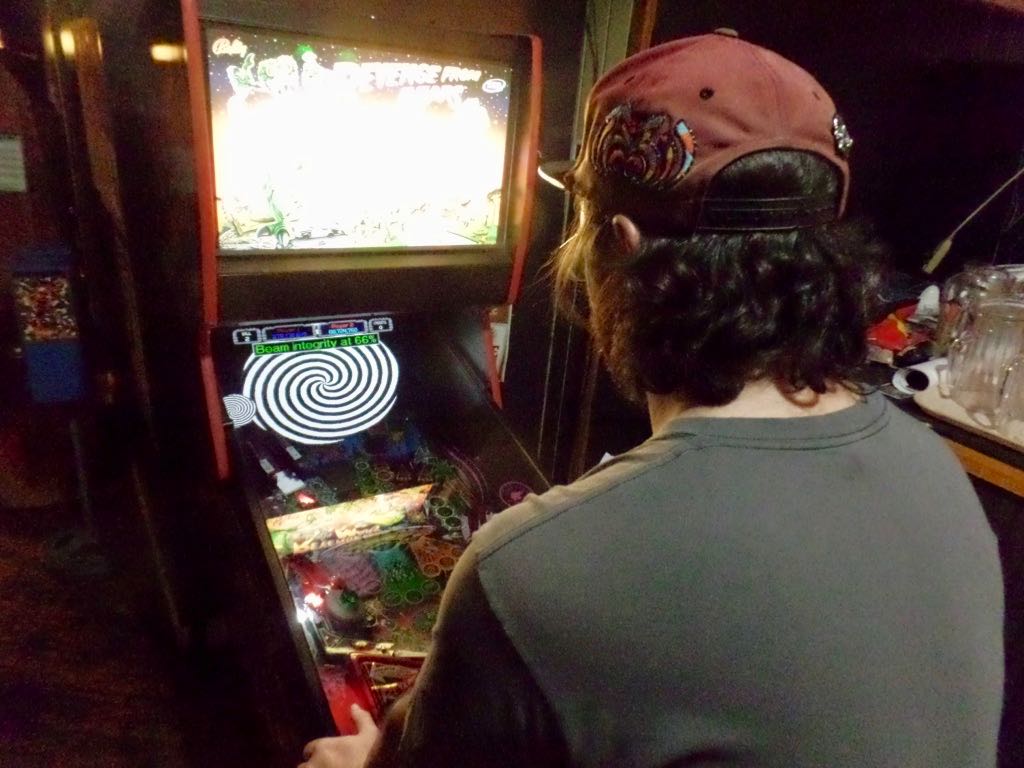 So, this is the part of Revenge From Mars where the game tries to hypnotize the player. 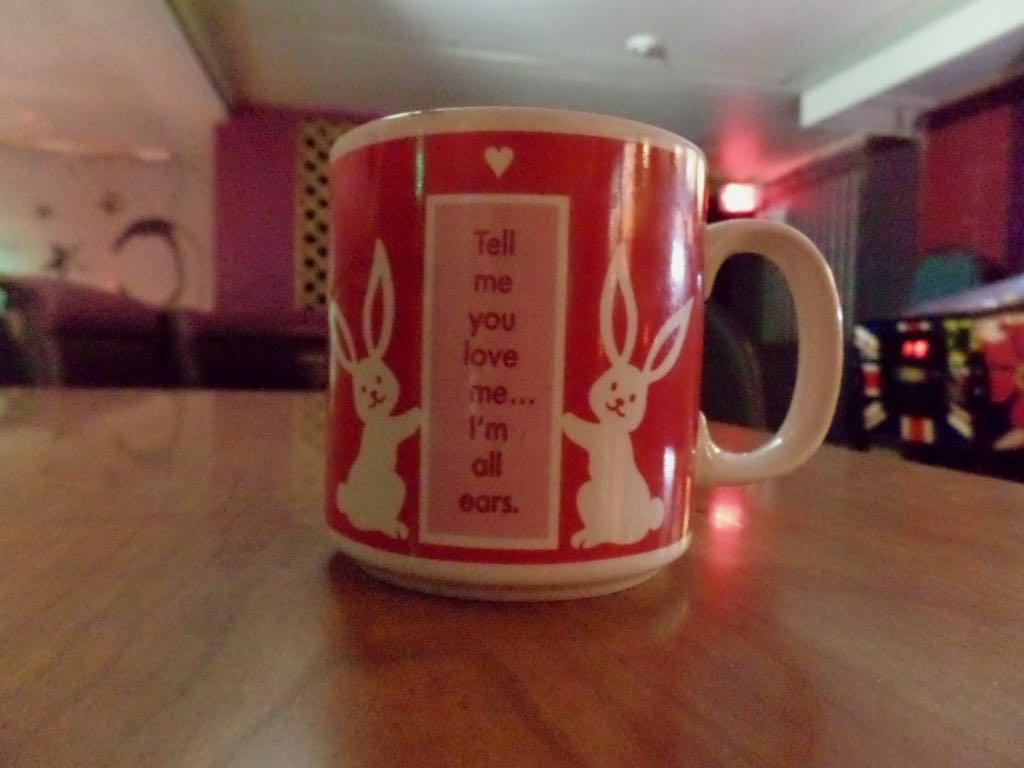 The venue has coffee that can best be described as ``existing'', and coffee and sweetener are maybe there, but at least the mugs are appealing to 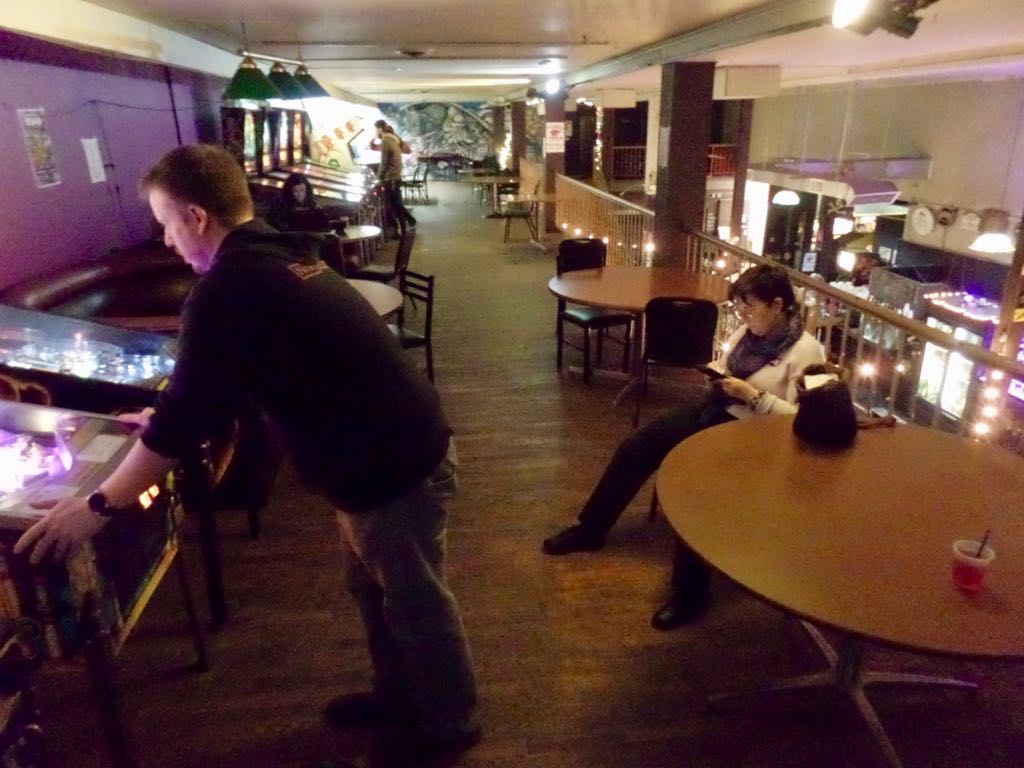 bunny_hugger takes a moment away from the high-stakes competition of the finalists in play. 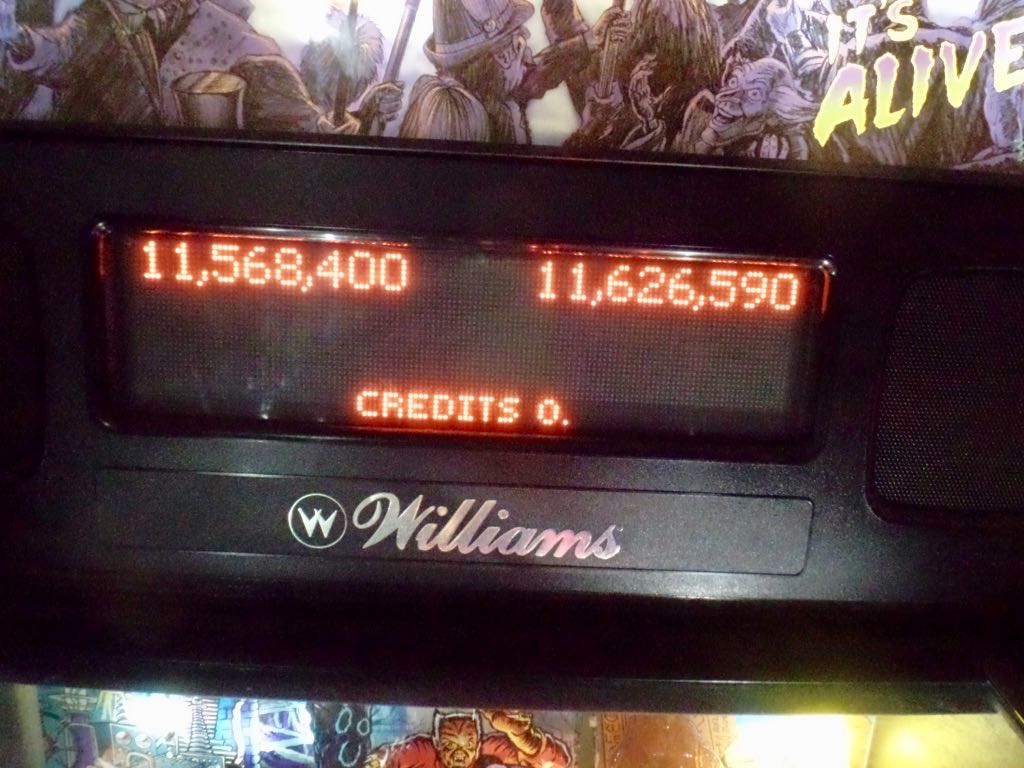 So, yes, this is not just a close game. But it's two of the best players in the league. And the game is Monster Bash, for which these are ... not ... really what either is capable of. Pinball, you know? 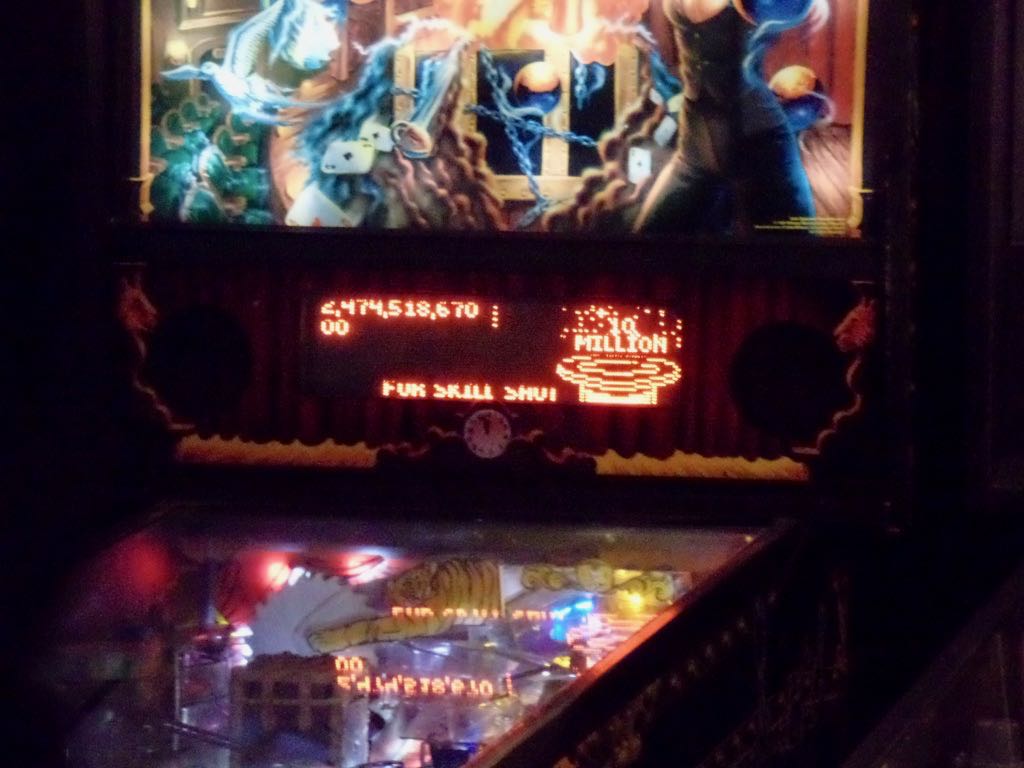 So, nearly 2.5 billion on one ball of Theatre of Magic is an exceptional game; I think it by itself would have put MWS on the high score table. That's more like these players can do. 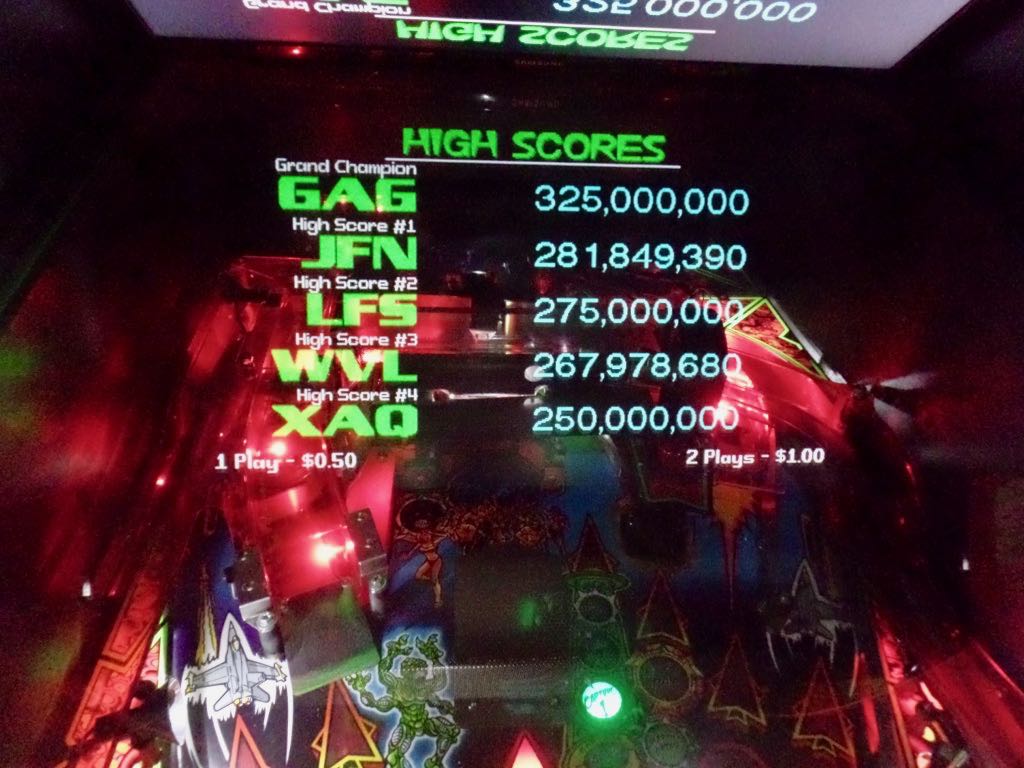 Yeah, so, in all the months Revenge From Mars was at the venue, nobody got near the high score table because the default scores (the ones that are nice round millions) were too high and the tilt was too sensitive and the ball save was, inexplicably, turned off. And then in the battle for third-versus-fourth place, both me and WVL broke onto the high score table. Pinball, you know? 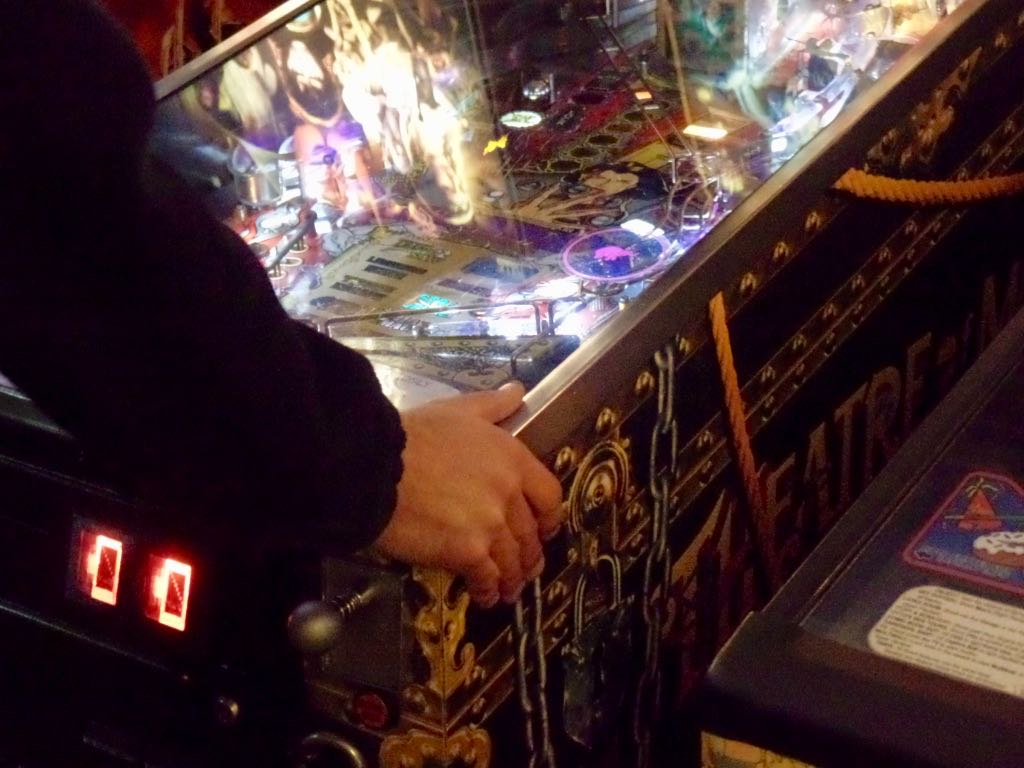 Action scene: MWS working on his lead in Theatre of Magic. (Or possibly another round of it, since there's a couple games they kept coming back to.) He would finish in second place.

Trivia: Future astronauts Ed White, Ted Freeman, James Irwin, and Jim McDivitt all attended the University of Michigan in 1957. Source: Moon Bound: Choosing and Preparing NASA's Lunar Astronauts, Colin Burgess. (I am not certain that they all attended simultaneously, though: White entered the school in September 1957. Irwin graduated in 1957 but I can't find whether it was in spring or fall.)

Currently Reading: Sally Ride: America's First Woman In Space, Lynn Sherr. Her astronaut application listed, under past criminal offenses, a speeding ticket and a 1972 citation for 'trespassing' that apparently is all anyone knows about that.