Dancing and prancing in Jingle Bell Square, in the frosty air

I need to better diversity the topics on my mathematics blog. That's not going to be something I do this week. Nor did I do it last week, as you maybe already saw on your RSS feed. If you missed me writing about comics last week, though, here's a chance to catch up:

And then in comics-reading news I have a report. What's Going On In Mark Trail? Why did Comics Kingdom screw up its web site? January - April 2019 in plot recaps. There's no good reason for Comics Kingdom to have screwed themselves up so. Web sites just do that when they realize people have been using them successfully for a healthy while. 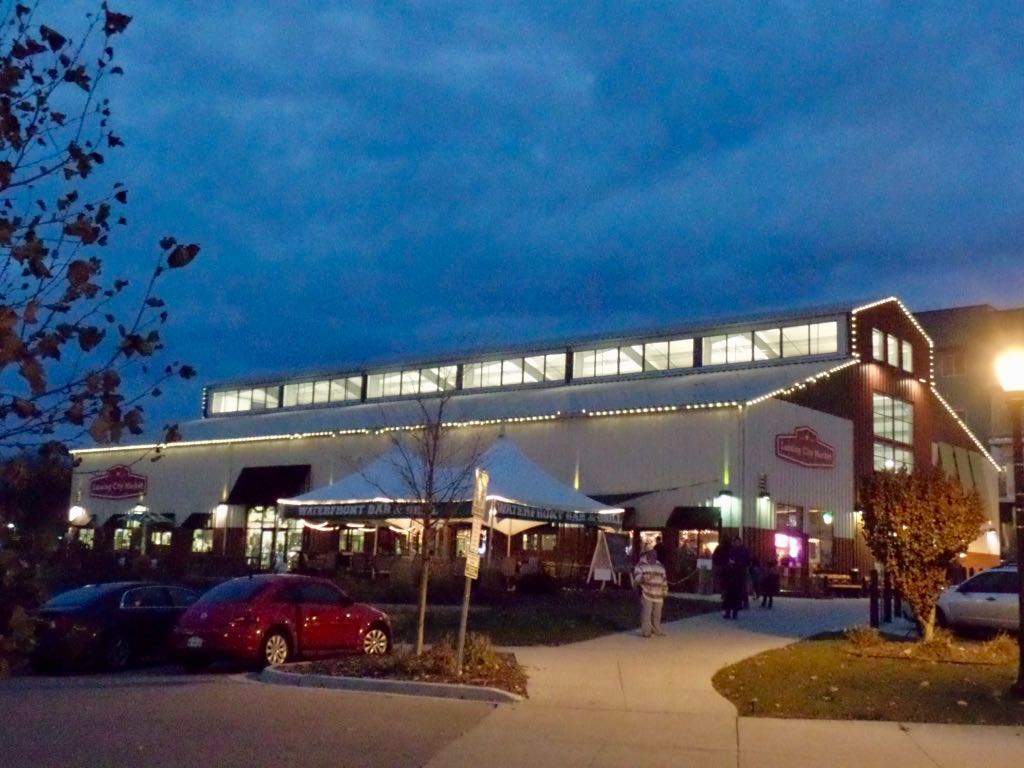 And an outdoor view of the City Market in the early evening light. The building is still there, of course, and so is the bar. It's just the rest of it that's gone fallow. 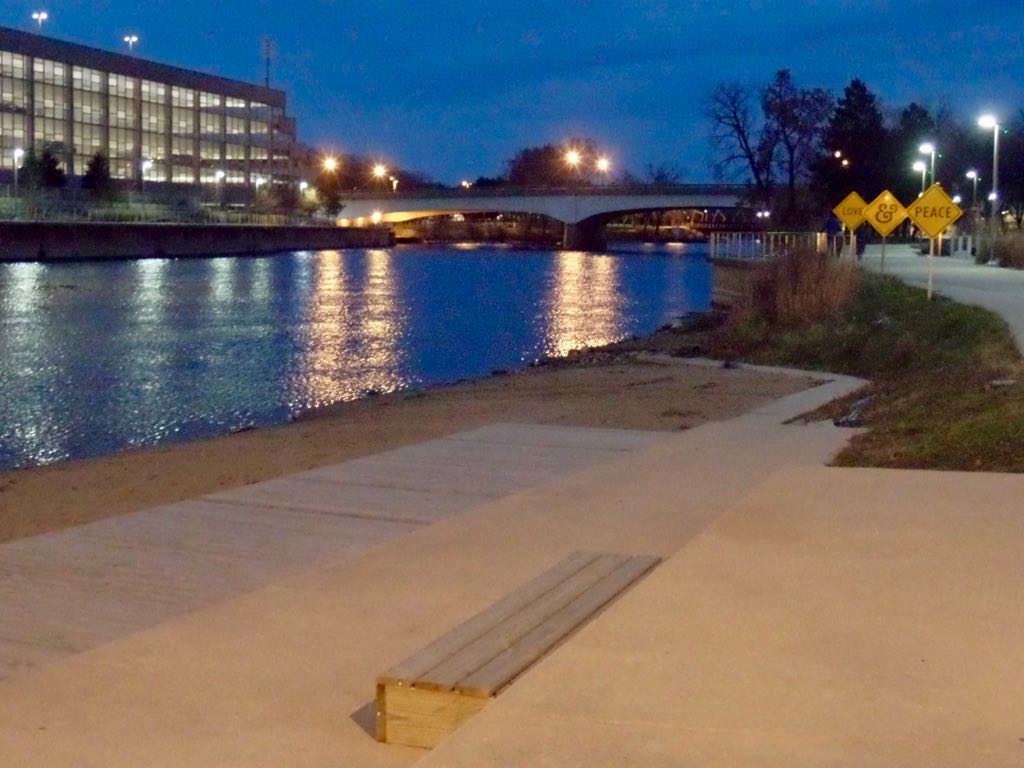 The Grand River wending its way through Lansing. The Peace And Love signs are along the river trail, which itself winds through a lot of the city. There's like three major rivers that converge in Lansing, which is of course why our water supply is an aquifer instead. 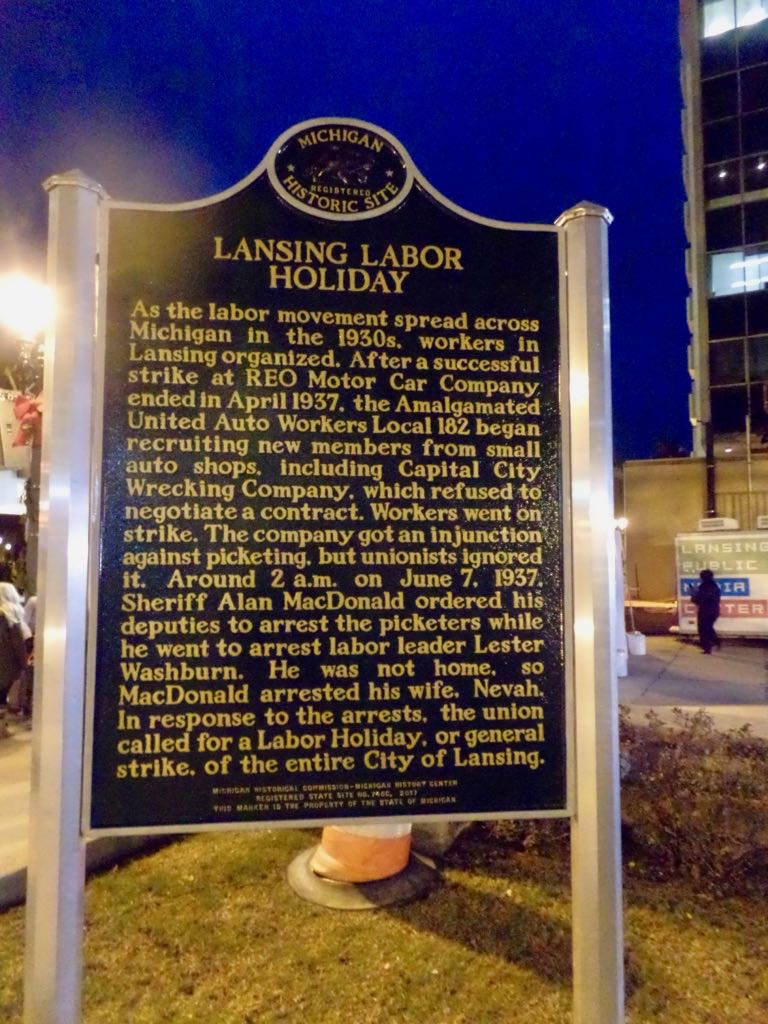 Historical marker near City Hall which I did not remember having seen in previous years. It commemorates the general strike of 1937, which needed all of one day to get Capital City Wrecking to negotiate with its workers. 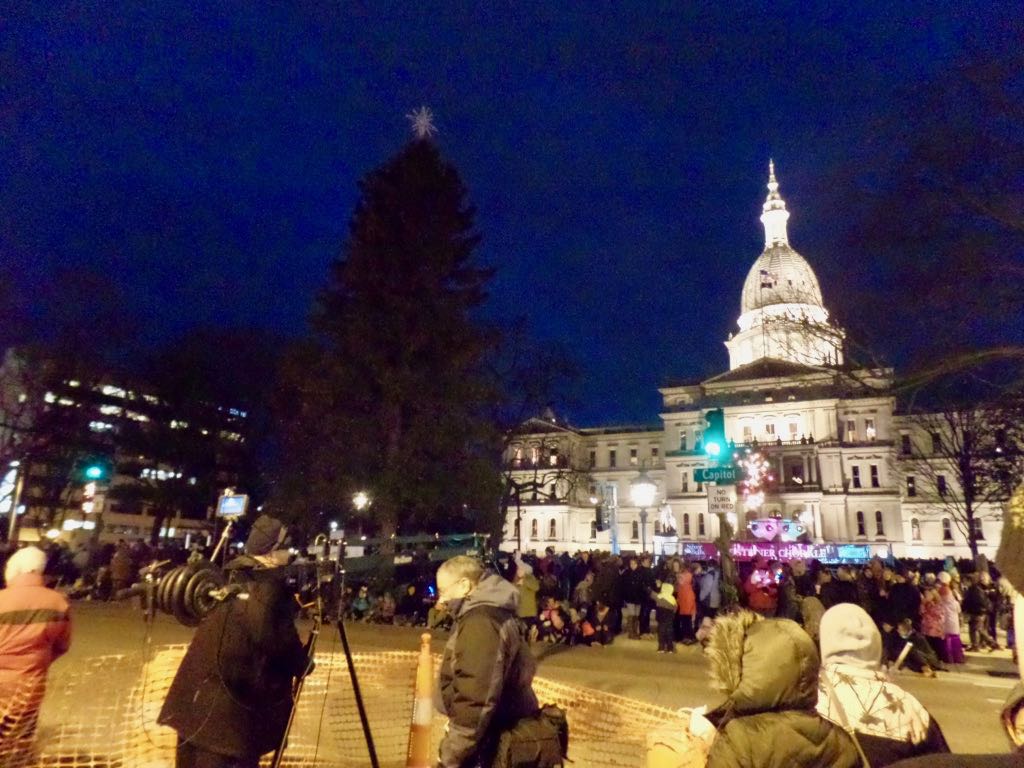 Our vantage point for the parade: as ever, just in front of the Capitol. The state tree's standing unlit, but has its topper. We're right behind the Fox affiliate's camera crew. 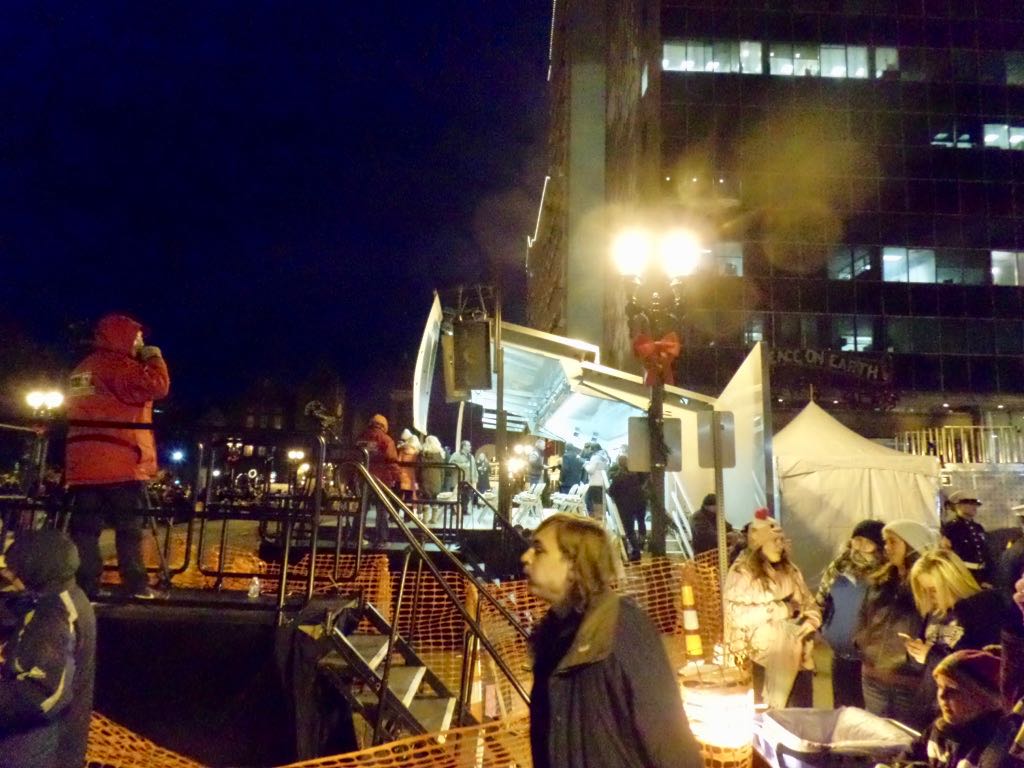 And off to our right: the reviewing stand. City Hall is past that. 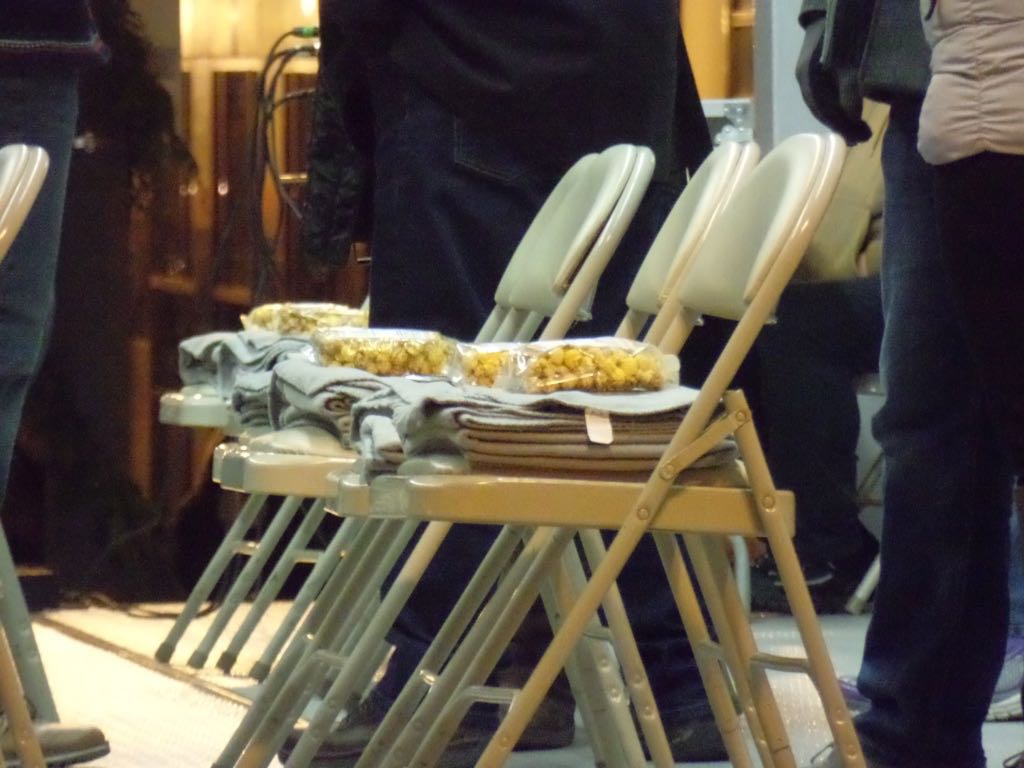 A little comfort for the VIPs in the reviewing stand: surely useful blankets and ... uh ... caramel corn? 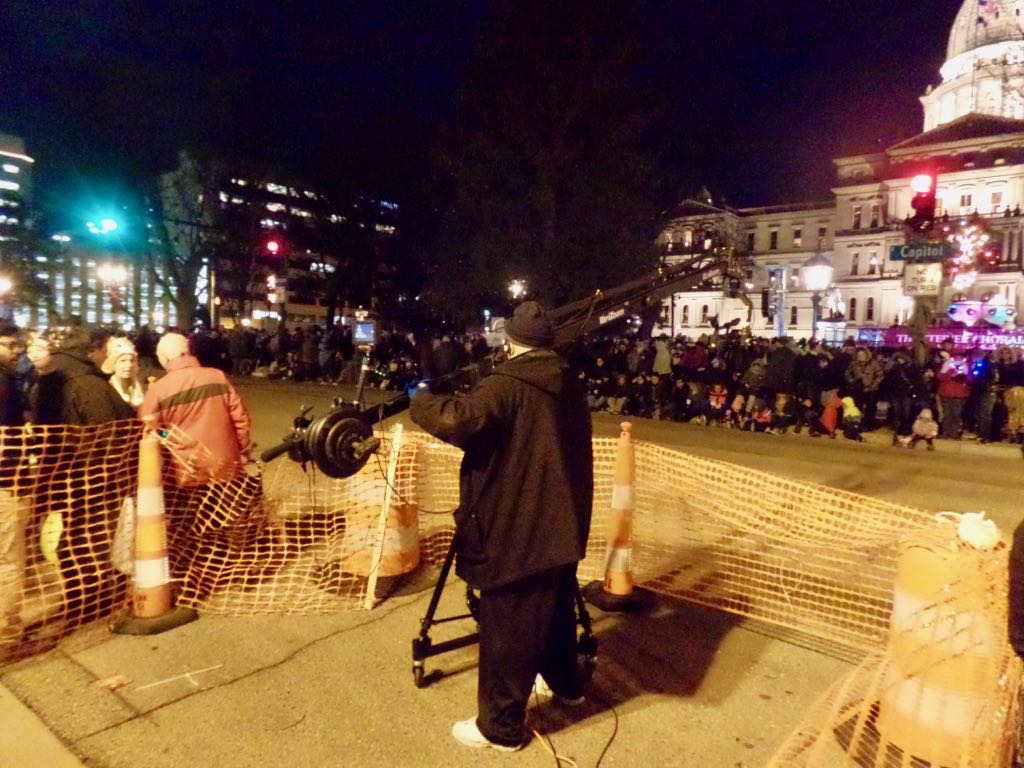 The guy working the camera on its extendible arm. He's almost an old friend of ours at this point. 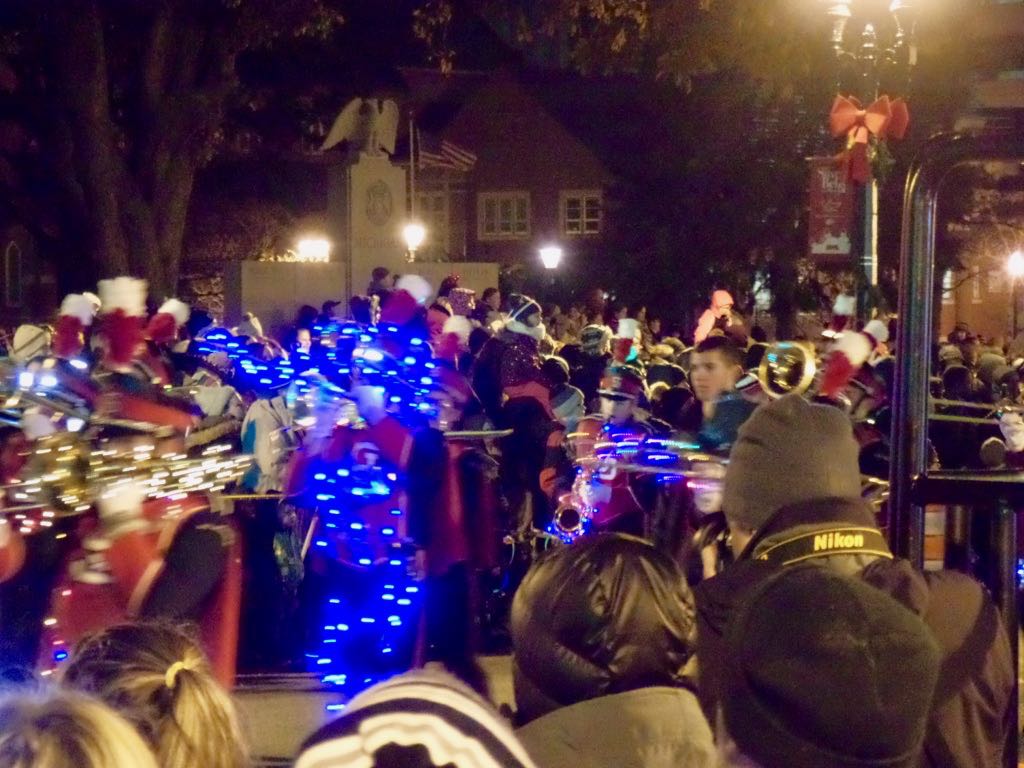 And the parade begins! The first of maybe ten marching bands comes out and is captured by transporter beam from the newly-refit starship Enterprise, readying for its encounter with Vejur. 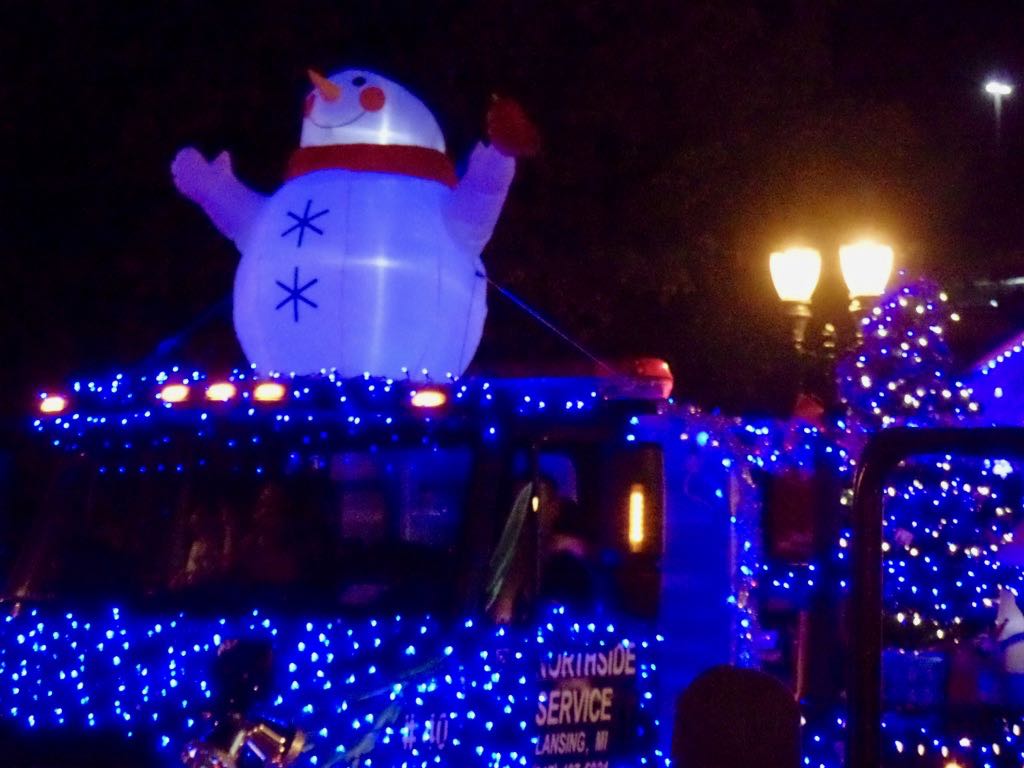 And one of the lighted parade floats. Northside Towing is surely not the only towing service in town, but it seems like it's the one that every parking lot sign says they'll call if you're parked illegally. I can't promise they'll snatch your car using the inflatable snowman truck. 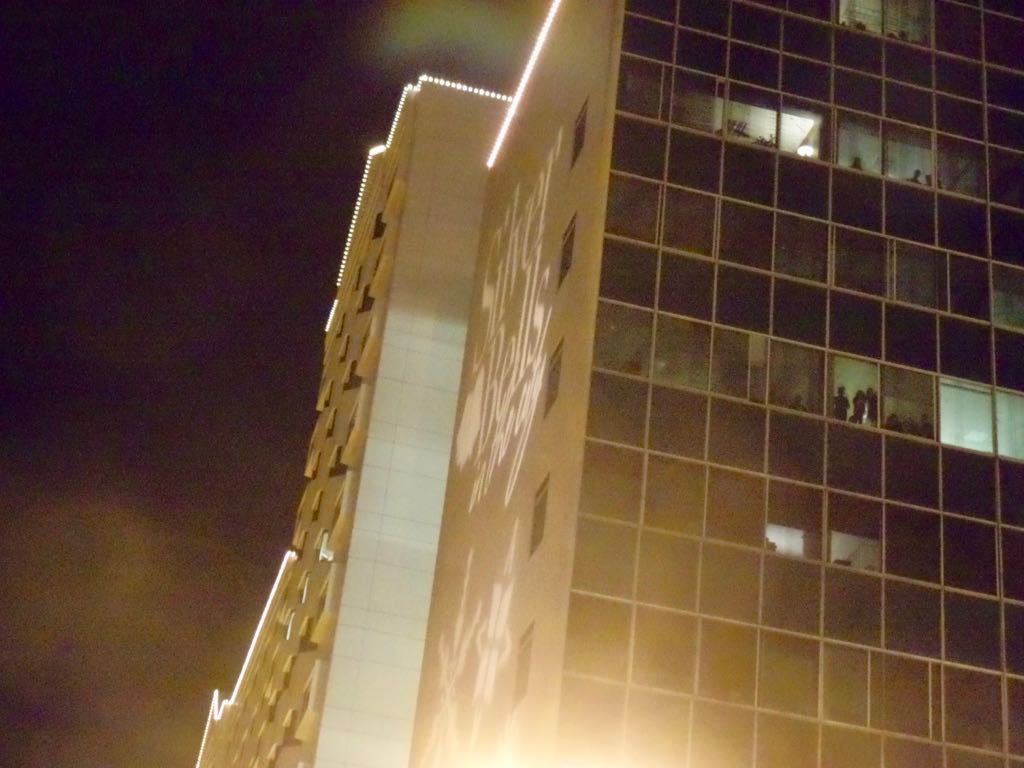 Meanwhile away from the parade, they're projecting logos and things onto the sides of mid-century modern architecture. 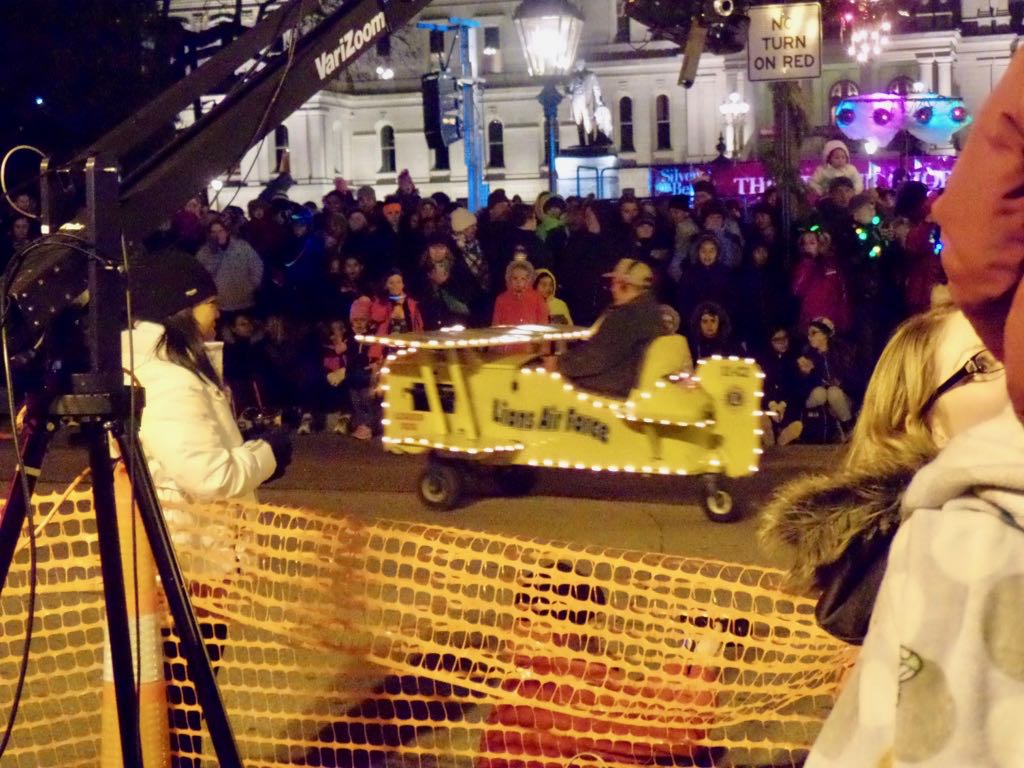 The Lions Air Force, one of a couple of 'planes' that putter around as part of their charity campaigns against eye disorders. We were so disappointed the planes weren't around for the 2018 parade. 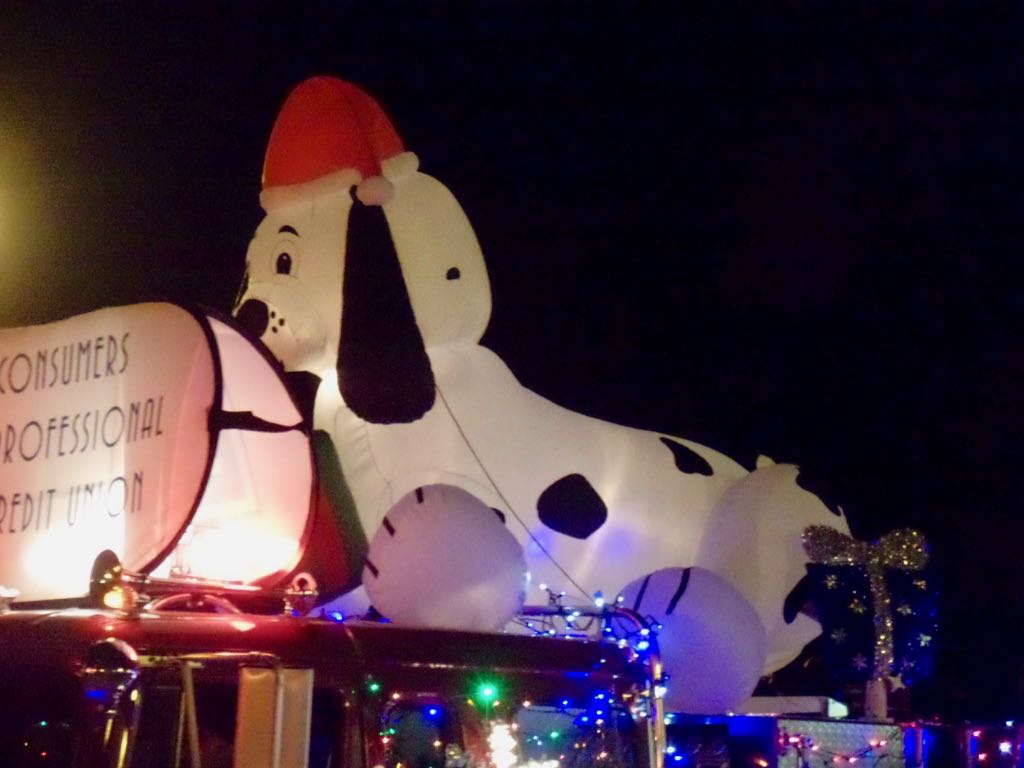 And the big inflatable dog that one of the credit unions in town wants us to connect to them.

Trivia: In summer 1915, watermelon rinds made up one-fifth of the garbage of Savannah, Georgia. Source: Down To Earth: Nature's Role in American History, Ted Steinberg.