14 people attended March Hare Madness. That's about what it's drawn in previous years. A couple stalwarts, like CST and KEC, weren't there. Maybe it started too early; we needed the playing time. DMC, for example, surely would have played except his work schedule prohibited it. Maybe it conflicted with the league in Kalamazoo; there's enough pinball in Michigan now that you can't pick a date that doesn't conflict with something. But a lot of the local players were there. And a few rarer folks showed up. JTV, whom we hadn't seen since the Bill's Basement tournament in January, was there, for example, though he was the only Grand Rapids player.

We'd expected this to be a tournament where we learned things. One thing that I learned slowly: since player groups were drawn randomly, and didn't reflect performance in the tournament so far, I could make them ahead of time. I didn't have to wait for results of a round to be in. I could shuffle the index cards for players and games. (Indeed, it strikes me now I could've done a half-dozen rounds at a time without serious mishap. Well, maybe somebody would have had to leave early.) But this would save precious minutes, once I thought to do it. We had three and a half hours to play, and wanted to get in as many rounds as possible. This is why we tossed out nearly all the games which league experience taught us go on forever.

We all got dealt two cards for showing up. And then had the chance to earn more cards. For simplicity's sake we set the 'bounty' to earn a new card as earning an extra ball. Nearly all games have this as option. On some tables it's all but guaranteed (The Beatles, Attack From Mars, Medieval Madness). On some it takes some doing but can be worked out (The Simpsons, Tales of the Arabian Nights, The Munsters). In principle you can set a goal per table, but we figured ``earn an extra ball'' was easy to set and remember, and it offered compensation for the tournament rule that you would not play extra balls.

Everyone was cautious about using cards, early on. I'm not sure anything was played round one. Round two, someone played the card that let them swipe one of my cards at random. They took the card I'd just earned, the one that cancels someone else's spell. Well, I was hoping they'd take a card I thought useless instead. Had I used the cancellation card I'd ... be in exactly the same fix, although they wouldn't have my spell-cancelling card. In the second round things got more aggressive. Two groups had the cover-the-score-screen card. One, GCB, was in my group on The Beatles.

Also in my group, JTV, who'd never played The Beatles before and who on ball one put up an incredibly good game. I don't know his score, but it was almost enough to secure a win already, and he was on pace to get to the A Hard Day's Night mini-wizard mode. And here I failed to use a card, since I could have, at the end of the first ball, stolen his place and score. But I felt confident about the game, and with reason; it's maybe my strongest table there. Despite a lousy first ball myself I came back and was barely short of winning after all. JTV didn't get A Hard Day's Night going, surely because he didn't know he was so close to it. If the screen weren't covered he'd have had a shot.

But you see where, already, I was using my cards lousy.

Trivia: The Federal Patent Act of 1790 set the cost of a patent as $3.70 plus the copying of invention's specifications at ten cents a sheet. The 14-year patent would be signed by the President of the United States, the Secretary of State, and the Attorney General. Source: Yankee Science in the Making: Science and Engineering in New England from Colonial Times to the Civil War, Dirk J Struik.

PS: Some more of the Silver Bells parade. 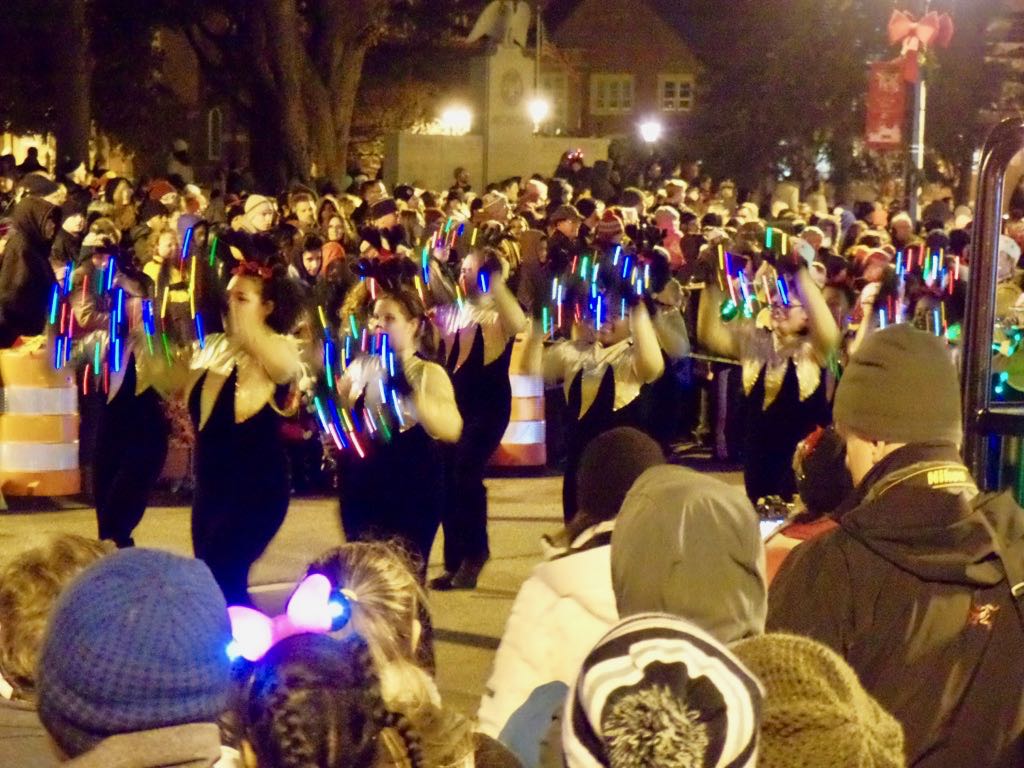 Another marching band, dazzling us by having small crowns of glow worms hovering before their chests. 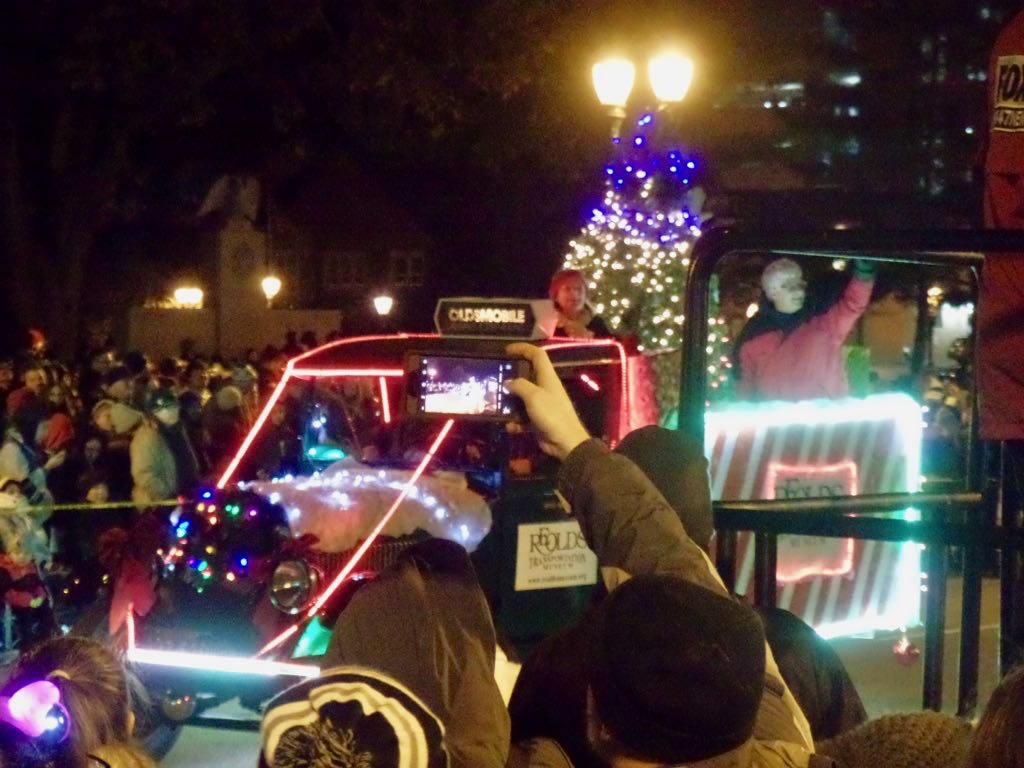 An actual Reo Speedwagon, part of the R E Olds museum we still haven't been to. 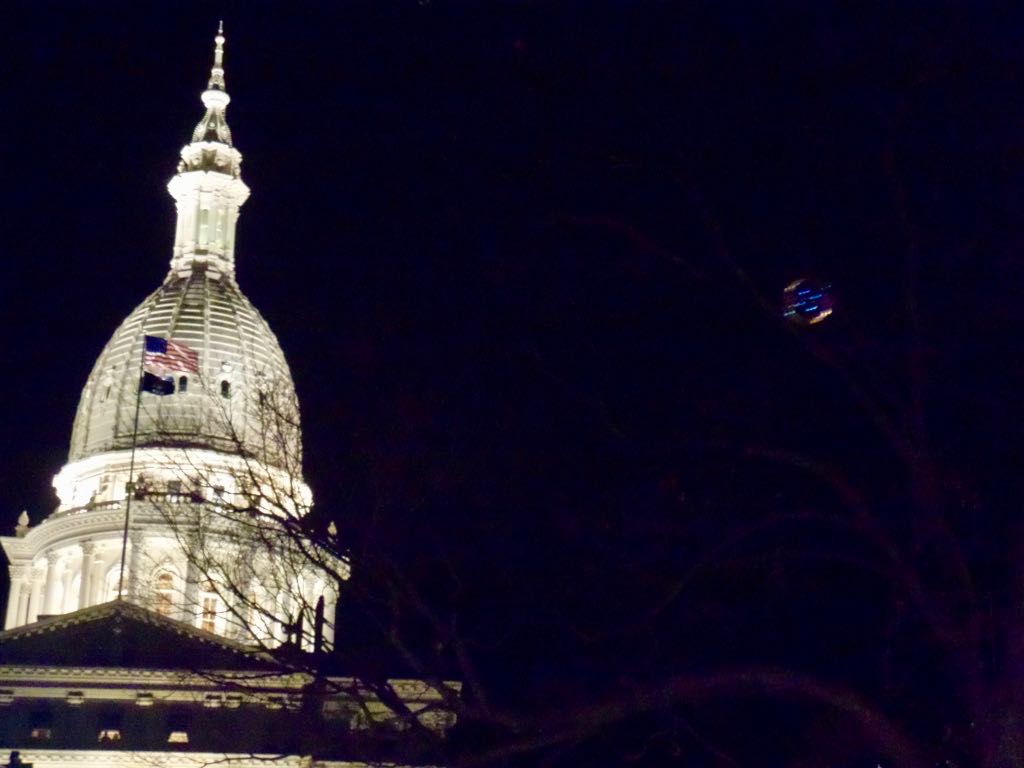