Put that baby spell on me

As the night wore on people got better about using their cards. Cards to swap one game for another. Cards to replace a player in their group with someone else. Cards that it turns out we mis-read. The swap one player, for example, specifically said the replacement player was drawn at random, not by card-player's choice. And there were a few cancellations too.

It got busier as the night went on and, probably, people realized if they didn't use their cards now they never would. In one round IAS used a card to kick me out of a group playing a table I really liked. The next round I was on Simpsons, along with

bunny_hugger and IAS, and realized I was running out of chances to use cards. IAS could beat me on Simpsons fairly easily, so I played my swap-a-player card on him, which he couldn't cancel. Our replacement: RED, who's at least as good as IAS. Hm.

Well, RED went and put up an intimidatingly good game on The Simpsons, racking up like twenty million points; this is a table where five million is usually a really solid score. I put up about seven million my first ball. And then I played the last card I had on hand: swapping positions with RED. This prompted

bunny_hugger to kick my shin, since now she'd have two RED-class scores to compete against. Well, fine. Anyway, I started to play and RED tossed down his card: one that compelled me to stop playing right now. Oh, very good. (If you get this card, you get a compensation ball, next game ... which is fine except that means if you've built up towards a big payoff, you have to start from scratch.) Although he really should have played a few seconds later, when I probably would have started a high-value mode that he could have spoiled. Well, I ended up in first here again, and RED built my decent start into a good-but-not-as-good second-place finish, and

bunny_hugger cursed me out for it all. And yes, this was the card I didn't use on JTV for the Beatles. I would say this worked out well for me, not because my net score would have been higher, but because it turned out to force RED to play that stop-playing card now, rather than in finals when it might have really messed me up.

When regular playing was done, to my amazement, I was in first place. I never qualify in first place on anything. I was in finals, although being first place wouldn't get me any advantage now; play order and games would be drawn at random too.

bunny_hugger was meanwhile in her favorite pinball situation ever: she was in a playoff to make it to finals. Four people (!) had tied for third place and she was among them. (Her absolute favorite pinball situation is to be in a tiebreaker with me.) The game came up Tales of the Arabian Nights, which she felt great on until she bricked the first ball, putting up a score of ``the game points and laughs at you''. And then JTV put up a 12-million-point ball, a score that's ordinarily good enough to win the game. She was despondent and I offered all the advice I could. That she should leave the building, shake off the lousy first ball, and come back in with a fresh mind. Which she should have, and which she did, but she didn't think it was helping.

Then RED played a card. It was the card to wipe out the first ball altogether and force everyone to replay the match.

A new round on Arabian Nights. A new start.

bunny_hugger stepped up to the game with the confidence of someone saved from the guillotine and ... bricked the first ball, putting up a score of ``the game laughs at you''. It was less dire than the first attempted first ball, but still bad. Still, her gloom was broken. And JTV did not repeat his killer first ball. She got her confidence together, and put up ultimately a score that won the group. And that, had she done it in the interrupted game, would likely have got her into finals anyway.

bunny_hugger and MAG, one of the Lansing pinball league's original players, who was away for life obligations for years and who's come back to disrupt its normal balances by being really good. Our first game is Elvis, on which I have an impossibly good ball, one that starts the simplest multiball, Jailhouse Rock, and just never ends. Jailhouse Rock, it turns out, is really worthwhile if you can get up to the super jackpots.

bunny_hugger is cursing me out for putting up 70 million points on my first ball. I'm just hoping desperately that nobody has another of those swipe-the-score cards. Nobody does, though, and we finish me first, RED second,

Next game. The Beatles, my ace in the hole. I don't just win this, I'm able to get an extra ball, for another card. We kept that going through the finals. The card is to swap one game for another. I say ``I'm able to get an extra ball'', although part of what's great about the Beatles is it's really easy to light extra ball. A bit harder to collect, but still. The four of us repeat our finish. And that's great for me: it's now impossible for me to do worse than second place.

Our last game: The Munsters. I don't want to play that. I don't have a reliable strategy on it, and RED does. I play my swap-the-game card. I want to go to the Beatles again. RED wants the Munsters. He has a cancel-the-played-card card. Nobody else has anything to play. So we go to a game he's strong on, and I'm not, and I believe it'll come down to whichever of us, RED or I, finishes ahead of the other. I have a fair game. He has a great one, managing in one shot to beat my entire score. But I do get an extra ball, and collect a card, for the tiebreaker I think we might have to play.

We don't need one. My second-place finish is enough to put me over RED's best score. I've won the tournament.

bunny_hugger has won 3rd place, just as she did at March Hare Madness last year.

It's, for me, a really good finish. For all that

bunny_hugger --- and other people --- esteem my skills, I don't usually win tournaments. I have like five in my entire playing history, and that includes little things like weekly Tuesday Night Smackdown tournaments at league, where we just play one game to see who brings home a cute little medal

And the Critical Hit format seems to be a success. People were enjoying it, and getting a better hang of it as the night went on. I don't know when to play it again. Surely next March Hare Madness. Maybe sooner. Still can't give a coherent reason why this is fine while our proposed play-with-oven-mitts-on, and other similar pinball gimmicks, is no good to the International Flipper Pinball Association.

Trivia: NASA's ten-day simulation of the Lunar Receiving Laboratory conducted in October 1968 identified 82 major and minor faults in the sample-receiving and -processing systems and equipment. Source: Where No Man Has Gone Before: A History of NASA's Apollo Lunar Expeditions, William David Compton. NASA SP-4214.

PS: Reading the Comics, April 5, 2019: The Slow Week Edition, featuring like 80 links to comic strips I don't actually talk about.

PS: And still more of the Silver Bells parade. 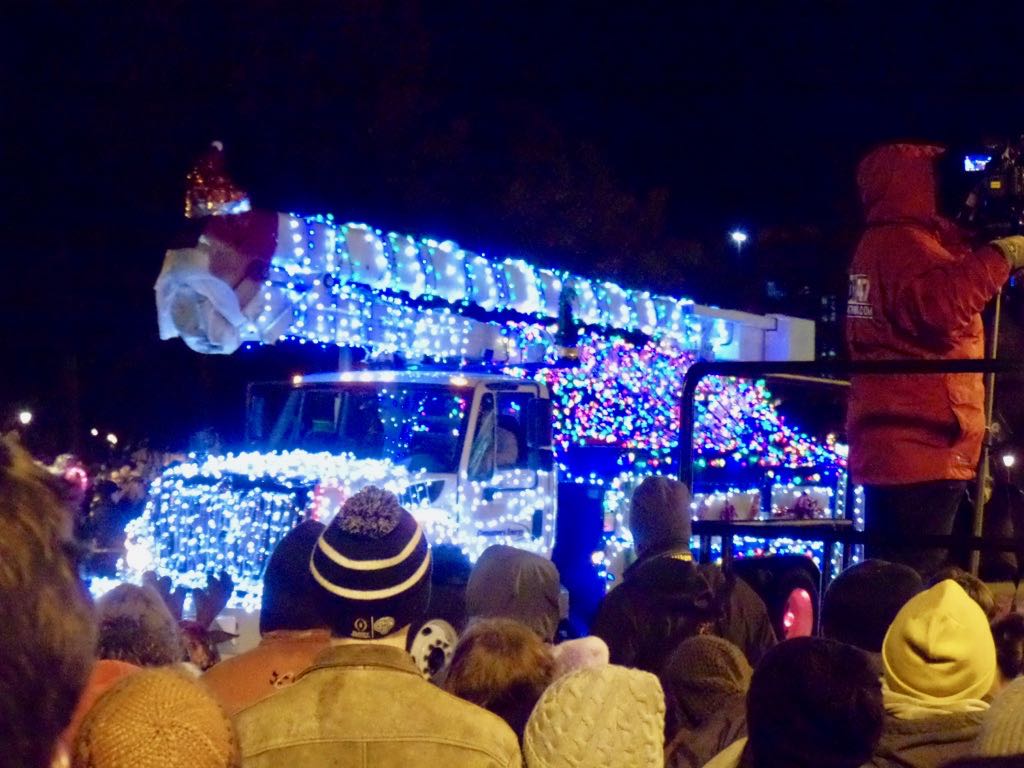 Cherry-picker for one of the local power companies. Meanwhile the camera guy is looking the completely wrong way for the parade. 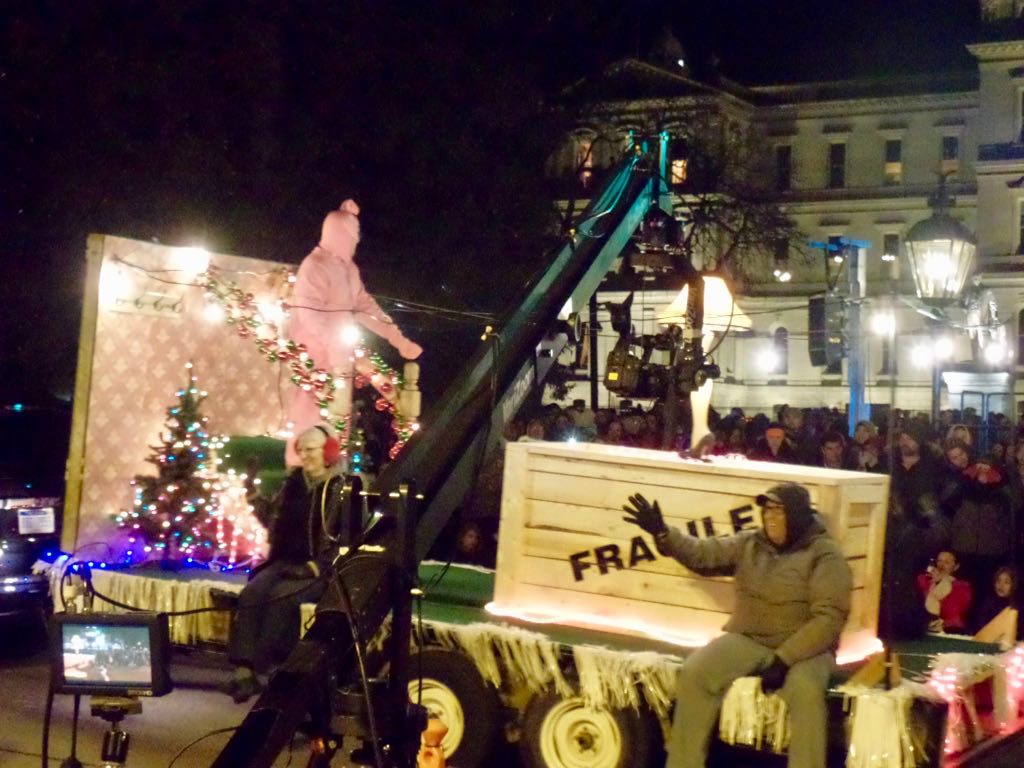 Someone or other put together A Christmas Story in float form. That is a lot of winter coat padding underneath the bunny pajamas there. 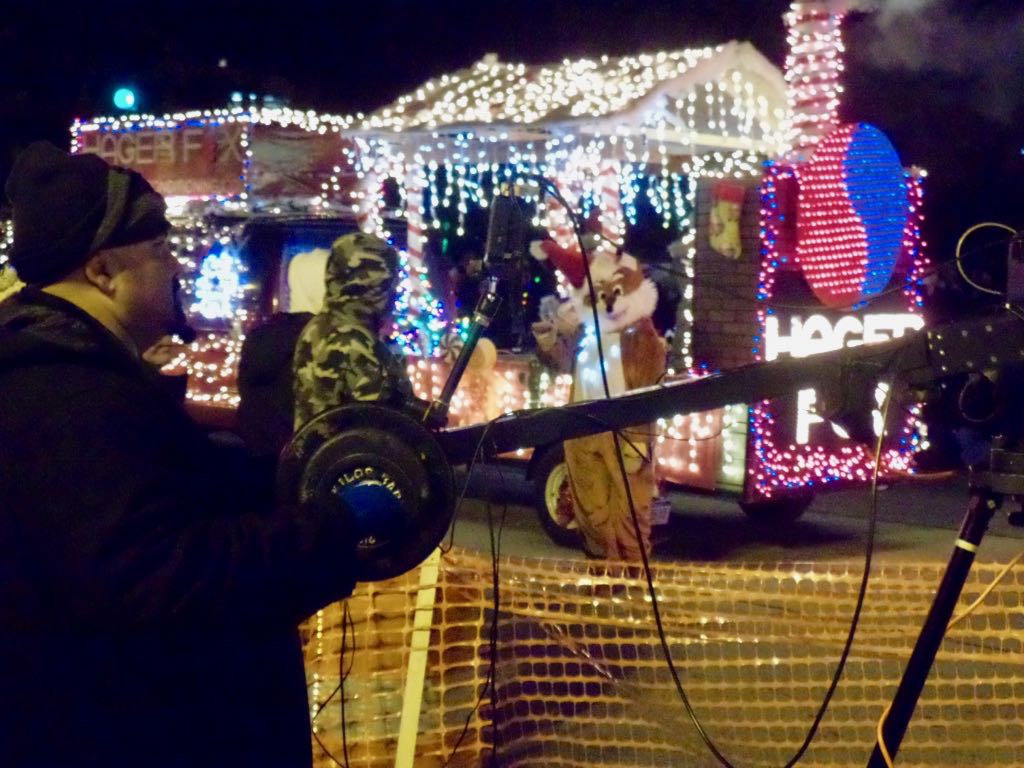 And the fox representing Hager Fox, a company that does heating and ventilation systems. They could probably use the help of some fursuiters at the parade, but it's good that they're trying anyway.