bunny_hugger had Friday off, so that Thursday was free to do recreational things. We've tried in off-pinball-league weeks to do Movie Night on Tuesdays, watching a DVD or something off the DVR. But the March Hare Madness tournament occupied that time. We might have watched something Thursday but, as I'd said, ``we can't have movie night Thursday, we're going to a movie.''

We went to the Sun Theatre, in Williamston, again. It looked less bedraggled than it had last month, when a lot of seats were roped off for roof leaks. The ceiling wasn't repaired, but there were fewer seats roped off. And there was a better crowd. Possibly Monday night, as we'd seen our last visit there, is just a really dead night.

Our movie: Wonder Park. We were kind of interested in this mostly because it promised to be a computer-animated cartoon about an amusement park. And we had no expectations beyond that, other than that maybe it won't be annoyingly dumb a movie.

And it was ... a better movie than we expected. The premise is this girl discovers the amusement park she and her mother had dreamed up actually exists, and is in danger of being destroyed, and she teams up with the lovable animal mascots to restore the park. That's all that we expected. What we didn't expect was that it would be pretty directly about grief, and fear, and sadness and despair. The girl's mother is off for ``treatment'' for her ``condition'' and the plot beats all make it sound like the mother died and the girl is trying to cope. I'd assumed the mother had died, off-screen, and was startled to hear a reference to her still being alive. The thing threatening the park is this Darkness, that gets fed pieces of the park which are never seen again.

There's a lot to like about the movie, and we liked it better than apparently every critic ever did. But we're easy touches for amusement park movies, and an amusement park movie with animal characters, that's pretty much aimed right at us. Particularly the first discovered rides, like a roller coaster with track overgrown in brush, are beautiful to see.

Is it good? Better than we expected, but we were expecting ``this will be a movie with a fantasy amusement park in it''. But there's just little bits that don't quite hang together right. Like, there's a big action scene at the start where the girl's made a roller coaster out of her house and some of the neighbors' fences and stuff like that. And, in order to give the start of the movie a big action scene, the roller coaster mostly works. That's fun enough. It establishes the fantastic premise that this is a girl with the patience and motor control to build complicated contraptions, which she'll need for later in the movie. And it gives a big dramatic exciting action scene for early in the film. But if you start out with a roller coaster car made of a kids' wheeled wagon, propelled by fire extinguisher jets, that works in the slightest, you're setting the realism level at pretty absurd. It makes the magical fantasy stuff later on less extreme. The girl's already been flying around her neighborhood; what's more about her flying around an imaginary neighborhood?

All right, maybe that's a necessary concession to make the movie start exciting. But there's a bunch of little unnecessary sloppy parts. For example, the movie is called Wonder Park, while the amusement park inside it is named Wonderland. Why the discrepancy? There are some real amusement parks named Wonderland --- the film's studio, Paramount, used to own one --- so maybe they felt some need to avoid that trademark. But then why not just name it Wonder Land inside the movie too? It feels like a script error nobody noticed until the recording sessions were over. There's, for another example, this bit where Greta, the wild boar, discovers that she's the glue that keeps the band of mascots together. Great, but ... it's not really something that was shown to be in doubt. They left in the resolution of a subplot they forgot to include. (There's some talk about how the gang all need the chimpanzee who's the core mascot, but I don't think it makes the connection to Greta having any particular needs.) And, like, another unforced error: at the end of the story the park is restored and everybody's happy, and the girl ... leaves. Yes, human characters always have to leave the fairyland to return to boring old reality; that's the way they work. But ... she doesn't want to even spend a couple hours going around the real physical manifestation of this supernatural amusement park that came from her and her mother's imaginations? Is that plausible? Why not a montage of her riding any of the things that the first scenes of the movie show her designing?

The movie has the production-trivia that its director was fired after an investigation into his ``inappropriate and unwanted conduct'' towards people on staff. Nobody ended up credited as the director, ultimately, so we can maybe excuse glitches on this. Maybe ultimately there wasn't anyone with a strong enough vision and authority to polish out the small problems.

But mostly I'm glad we saw it. The movie was more interesting than we expected or than it needed to be. It's got a bunch of characters fun to see. Boomer the Bear could only have been more precisely aimed at

bunny_hugger if he were acted by one of the Classic Doctor Whos, and it turns out in the United Kingdom version of the film he was voiced by Tom Baker. There's a fantasy sequence where the girl imagines her father struggling to live without him or her mother around; it's short, but fantastic, funny enough to watch on its own. It's only disappointing in that you can see where the movie might have been better.

Trivia: On the 11th of April, 1564, England and France signed the Treaty of Troyes, England ceding Calais to France for what has been, to date, the final time. Source: The Life Of Elizabeth I, Alison Weir.

PS: And here's some more parade! 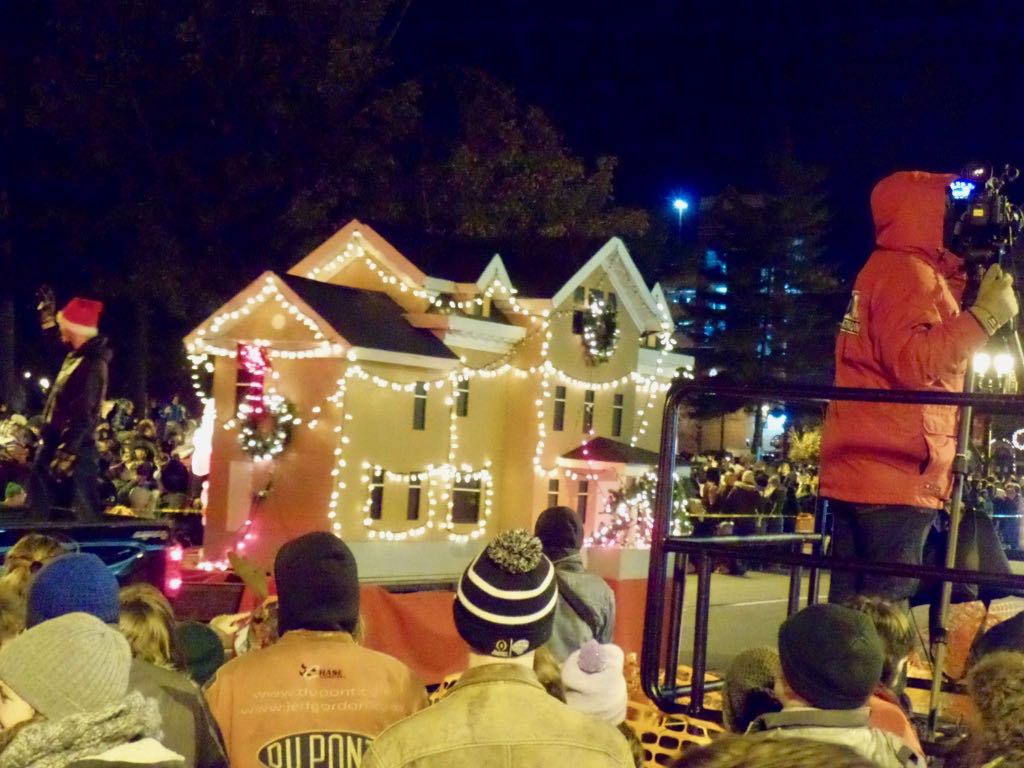 Another traditional float, this one of the Turner-Dodge House. It's one of the historic fine homes of Lansing and we might have had our wedding there except we'd have had to do too much event planning. The English Inn is much easier as

bunny_hugger was able to just go to them and say, ``I would like to buy a one (1) wedding please'' and that was that. 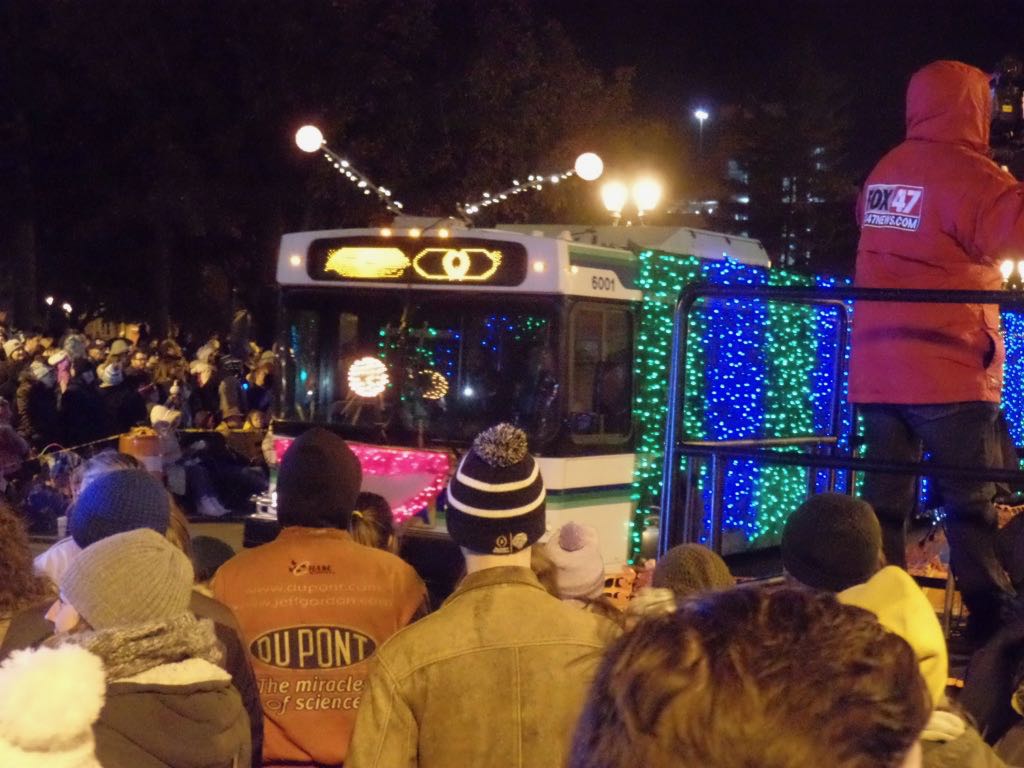 Another traditional and extremely popular float, the CATA-pillar. One of the bendy buses, being all flirtatious. 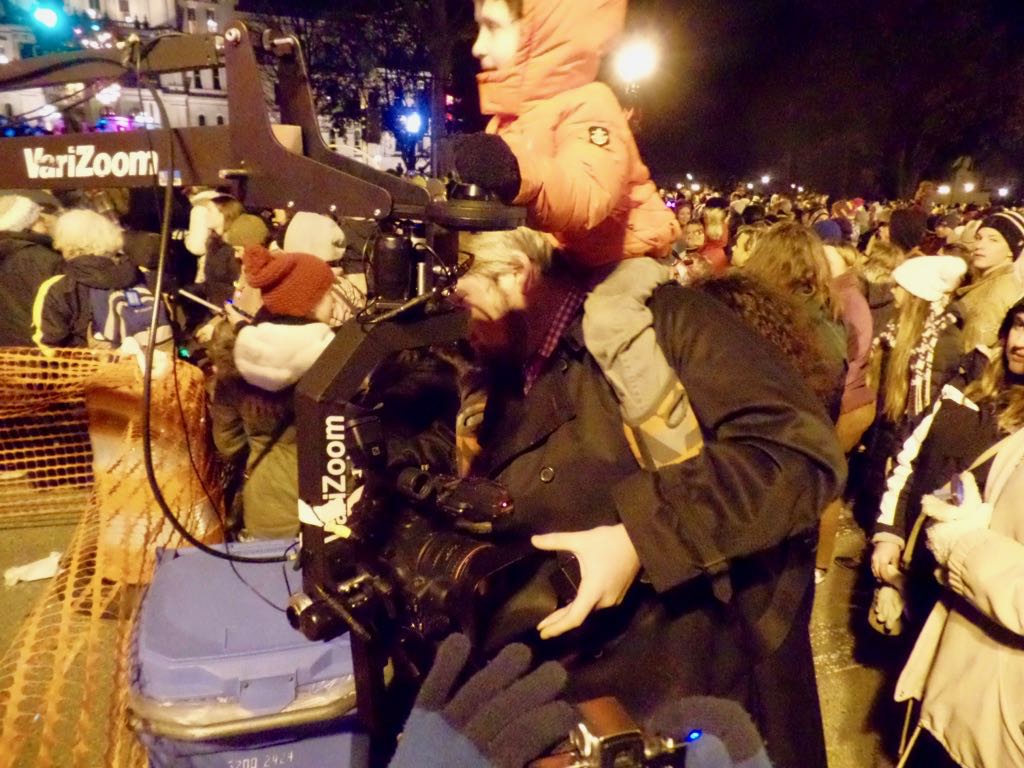 Hurry up! The camera was low on battery, so this friend of the camera guy had to take the very short commercial break between the end of parade and the start of the community sing to swap things out. WILL HE MAKE IT?