It was I confess an embarrassingly long time ago that we bought a new fire alarm. I forget why we needed a new one. I suppose the old must have broken in some obviously fatal way, but it was long enough ago I forget what the issue was. It wanted to be hung as high as possible, and reasonably enough. We have plaster ceilings. I'm scared to drill holes in them, partly for fear of doing lasting damage to a house that's 90 years old and that we see as caretakers for. Partly for fear of screwing up the plaster. So I put it on the side and resolved to drill the necessary holes sometime later when I had tools likely to do it with minimal risk of lasting harm.

Last week after far too long I finally did it. I got some screws specifically rated for drilling through drywall, and the hardware store people agreed that this should work fine, especially if you put a little bit of masking tape at the drill site to limit the chance any accidental cracks grow. While

bunny_hugger was at work, one day, I got up on the footstool and cursed out how I couldn't be sure I was holding the electric drill to drill vertically, and how the masking tape got spun off the wall by the drilling action. I could at least feel the confidence of how I had, at long last, done a thing. Well, the alarm keeps falling off the mounting that's what's actually drilled into the wall. I don't know why. But as long as we don't have to fiddle with the thing, that's all right.

Two days later while showering the alarm went off. I jumped out of the shower, and

bunny_hugger out of bed, and the thing fumbled out of the mounting. I did a dripping, towel-clad inspection of every room in the house just to be sure. No: the problem was the steam and hot air of the shower. There's disagreement on this on the Internet, but

bunny_hugger tells me there's a consensus fire alarms should be put five to ten feet away from the bathroom door and at the top of the stairs. These are mutually exclusive constraints in a house from 1928. That'll teach me for getting a thing done.

Or maybe not. We had resolved to take the fire alarm down for showering, and got lazy and forgot a couple days, and didn't get an alarm interrupting us, like, Wednesday. Also, really, what should fix things is repairing the ventilation fan in the bathroom. It broke, we trust of old age, a couple months ago and never got around to fixing it because it was winter, who wants less hot, moist air in the house then? But if we could fix that, then we'd probably put less strain in the hallway's atmosphere. Being able to open the bathroom window for summer would probably help too.

Still, our best hopes now are: we replace a ventilation fan, and we don't have cold enough nights we need to close the bathroom window. It still seems like a lesson to never do a thing, though.

Trivia: The Venerable Bede wrote of the confusions between the Celtic and Catholic computations for when Easter would fall, noting that in some years, such as 664, they differed to the point that ``Easter was sometimes kept twice in one yar, so that when the King had ended Lent and was keeping Easter, the Queen and her attendants were still fasting and keeping Palm Sunday''. Source: The Calendar: The 5000-Year Struggle to Align the Clock with the Heavens --- And What Happened to the Missing Ten Days, David Ewing Duncan. (If I am not misreading Duncan, this refers to King Oswiu and Queen Eanfl æd of Northumbria, but there were a bunch of kings in Britain at the time.)

PS: And now the last bits after the end of the fireworks and all that, from the Silver Bells In The City event, 2017. 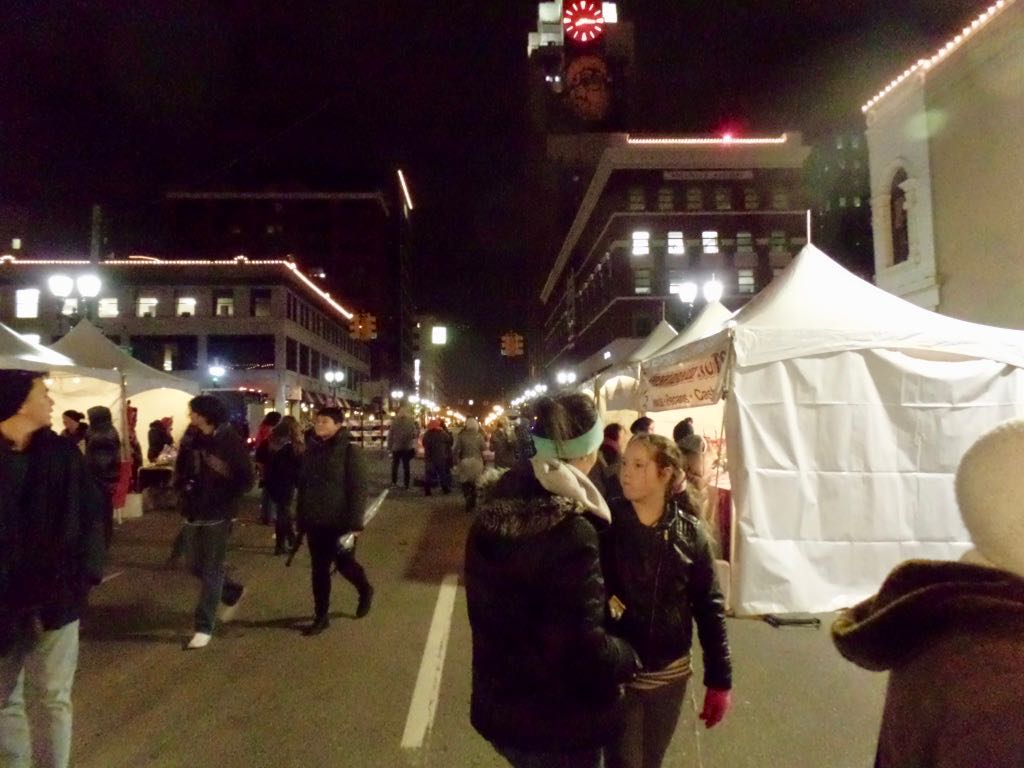 The Christmas Village, a bunch of little tents with vendors set up a couple blocks over from the parade and tree. This was, I think, the original part of Silver Bells, with the electric lights parade a later add-on and the state tree lighting coming even later than that. Do you see the ghostly image of Santa Claus looking down on everyone? 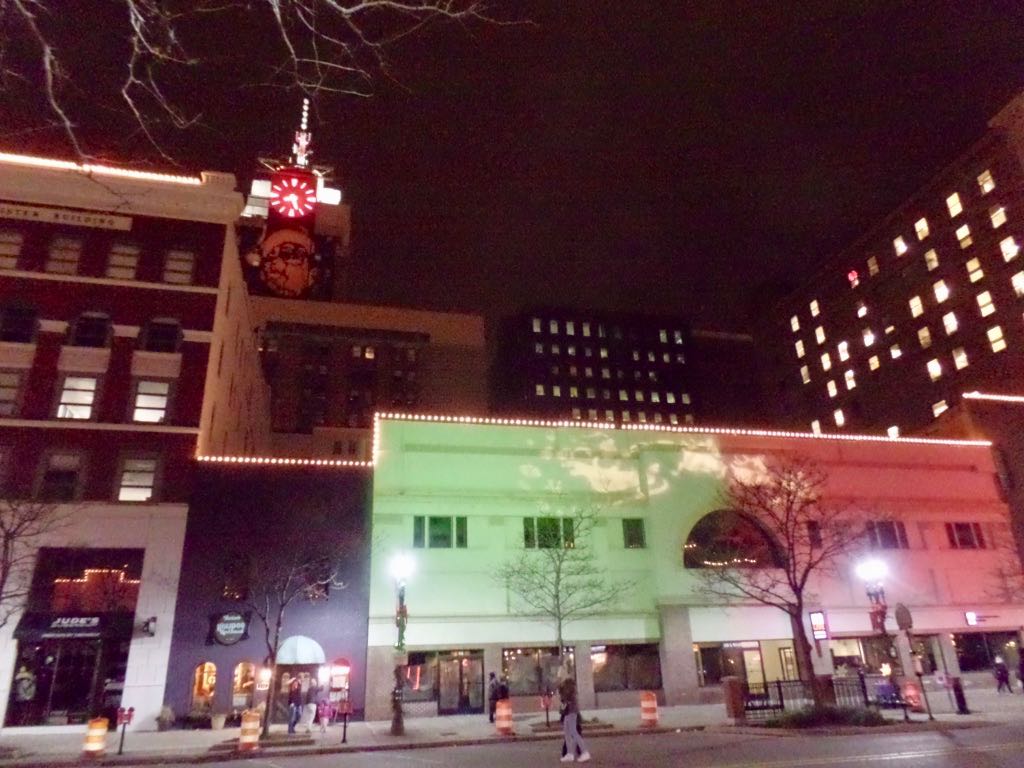 More of the cityscape, including lights projecting images. Green and red with a white Santa's sleigh on the lower buildings, for example, and the face of Santa up on Lansing's own skyscraper the Boji Tower, formerly the Olds Tower. The small, purple, brick building on the lower left is the Kewpie Restaurant. It's possibly Lansing's oldest restaurant, and it's one of the remnants of a long-dead chain of Kewpie Doll-themed restaurants, and it has what seems like a good claim to inventing the Olive Burger, a mid-Michigan hamburger variant, so there you go. 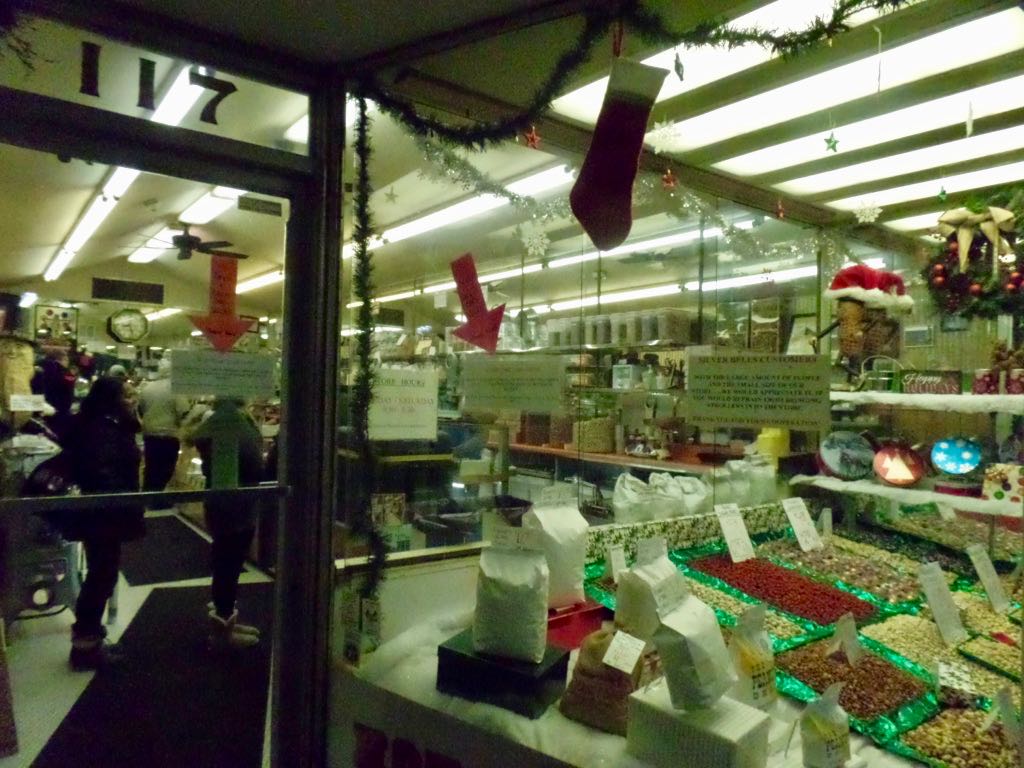 A quick snap inside The Peanut Shop, a former Planter's roastery that's still in operation. Not pictured: the army of squirrels who gather outside to cadge everything off shoppers.