bunny_hugger, so I'm getting it wrong. But, you know? It's basically fandom drama. It's all right to get parts of it wrong.

The center point here is the pinball league at Chesterfield. It's one we don't get to often. It's one we would love to get to. The place, in a bowling alley, has about fifty pinball games, almost all of them 80s and 90s games. We love the late-solid-state games and the golden age of late Williams games. The format's pretty good too. It's a strikes tournament, on randomly drawn games and groups of players, so if we have a good night we can play game after game after game. A good finish gets a huge payout in International Flipper Pinball Association ratings points. And there's a tournament every Monday. If it weren't for

bunny_hugger's work schedule we'd totally be there. But it's two hours away, and that when the traffic is good. We went last summer, at least during May and early June, but, of course, they take off most of the summer, when we'd be able to attend.

bunny_hugger had two weeks this semester when she would have been free to attend. But these were weeks they were holding finals, when we'd missed the whole 'seasons', so ... the best we could do is take the B Division trophy away from someone who had actually played. And if we didn't swipe a trophy like that, it would be because we'd gone all that way and had a bad night.

But the league is suffering growing pains. Until recently they had one incredibly serious player, AJG --- always a good bet for state champion --- who'd attend, at least until he had the twenty events that count for your state ranking. (After that, an event can only replace a lower-value event.) MWS often attends, but he's a less-high-ranked player. And of course

bunny_hugger and I are lower orders again. But the last few league nights, AJR --- who's been state champion twice, and is another steady bet --- started attending. He's no less a power player than AJG; indeed, he won the Stern Pro Circuit Tournament just last month. Also joining up: DAD and JMA. They're both in MWS's class. It's throwing off the rhythms and normal equilibrium of the group.

AJR seems to be a particular flash point. Possibly because he can clean AJG's clock, and the normal players of the league have trouble imagining that. (Most of them don't play in any league besides Chesterfield, so don't know the size of the competitive pinball scene.) Probably also because he's easy to notice. He's one of those players who wears gloves, which helps stand out. But he also wears a lamp, strapped to his forehead. It's not daft: many games are dark, or in dark venues, and many games strobe, and that's hard on eyes. A steady light source levels things out. But it also looks like, you know, showing up for a way more serious event than Chesterfield has traditionally supported.

Also this influx of high-ranking players is making nights drag on longer. Considering how when

bunny_hugger and I were there, and we'd have nights barely ending by the bowling alley's nominal 11:00 closing time that's hard to imagine. But if every night ends with AJG, AJR, JMA, and some poor mortal slugging it out through 40-minute rounds I can understand the mortal player getting fed up with it.

There's some talk about ways to cope with this. One that at least a couple people floated is stop having tournaments be International Flipper Pinball Association-sanctioned. That is, take the league out of the competitive-pinball world. And ... goodness. That would ... well, it would help us, because Chesterfield is this massive points mine for the players who can make it there, and there's nothing we can get to that compares. But we probably would stop, or nearly stop, going out there even in summers when we could. It's one thing to make a hard two-hour drive out there when, yes, you might play three games and be knocked out, but also might play three games and get 16.23 IFPA rating points. To make that drive when you might get knocked out in three games, and at best, be playing Judge Dredd at 12:55 am while the bowling alley staff watches you plaintively? That's harder to justify doing.

Which is all a shame. Chesterfield has besides the great venue the same sort of relaxed, laid-back, casual attitude that the Lansing league has. But the Lansing league is set up so it's worth rather fewer IFPA points, and so it doesn't have to risk ace players using it for a points mine. Still, we have been getting larger ourselves, and our league as it's structured will have serious problems if it gets to more than 20 players in one night. But we can improvise around that for one night. They have more difficult problems.

Trivia: Clouds typically release about a third of their moisture as rain. This can be increased if the clouds are seeded with particulates. Source: Molecules at an Exhibition: The Science of Everyday Life, John Emsley.

Oh, so, some pictures from the Super-Ball IX Zen tournament, in which pairs of people play matches. This was in November 2017, the last season that WVL, the league's founder, was running things; karmic justice would have him be one of the winners. 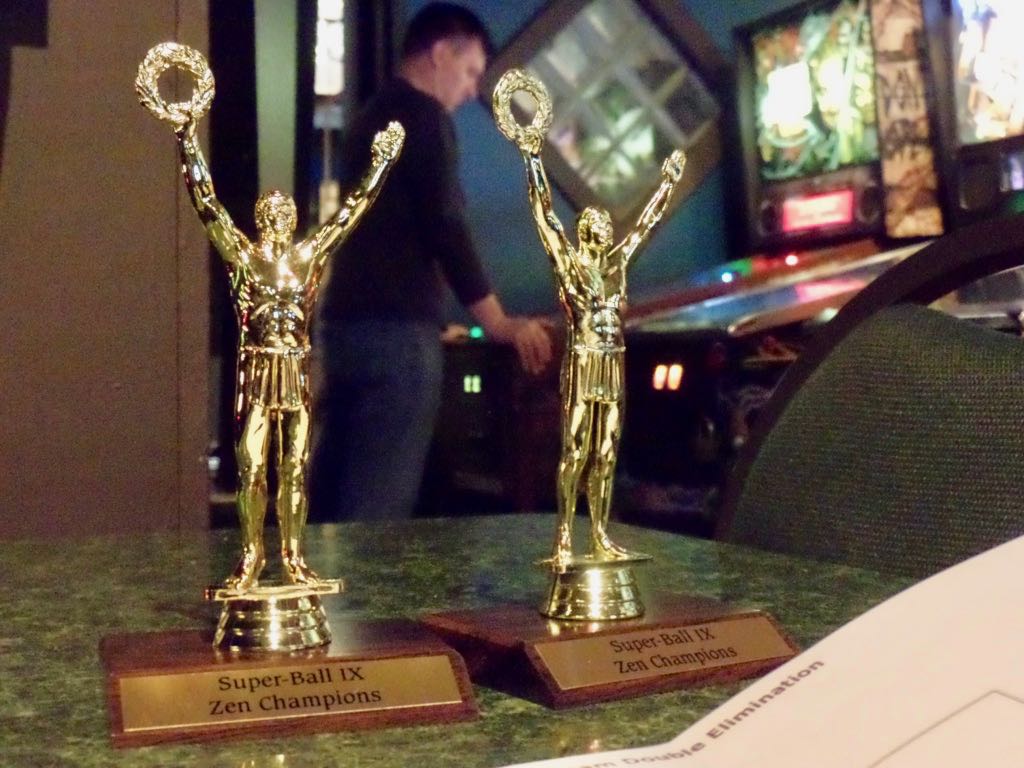 Why we play: the trophies for the winning team. WVL had gone to the trophy store and asked for the most over-the-top ridiculous trophies they had available, which is why we got Milo of Croton here. 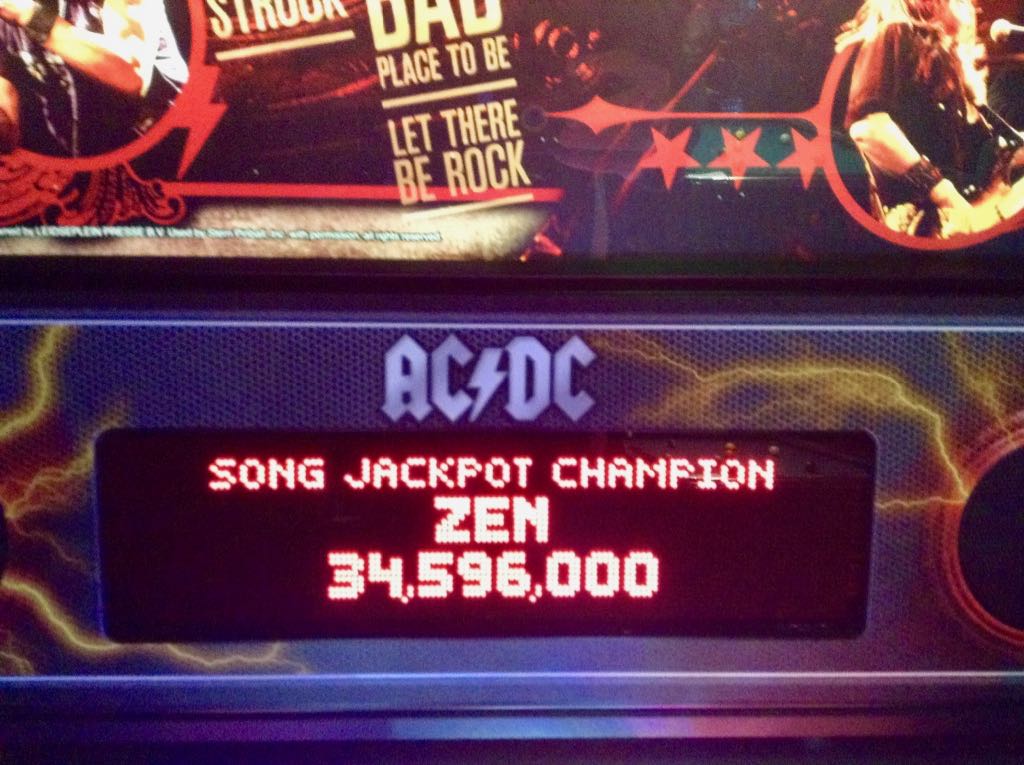 Playing with two people, one person each flipper, is not conducive to great play. But it can happen, if you have a pair that coordinates well and picks the right strategy. More than once it's happened that a team gets on the high score table, as for example here. So what to put on the high score table? People have to improvise. (I was not part of the group that did this; I'm lousy at AC/DC.) 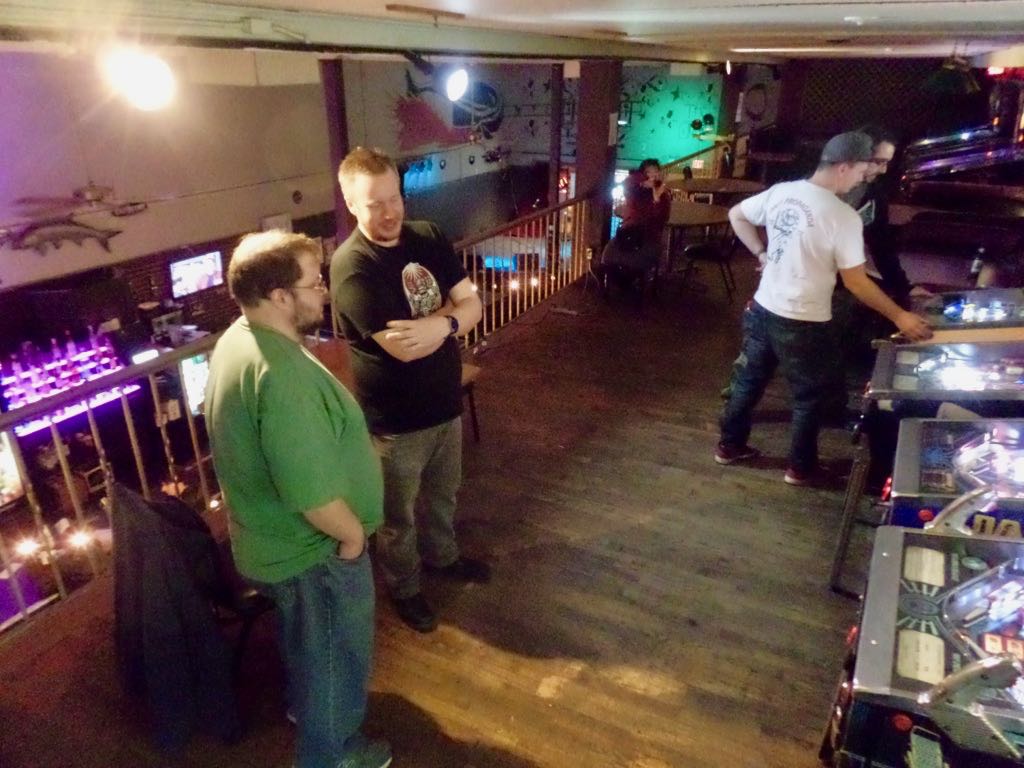 What a zen tournament looks like: one team on the table, one team talking over strategy,

bunny_hugger in the distance thinking whether she has enough pictures for the league web site report about this. 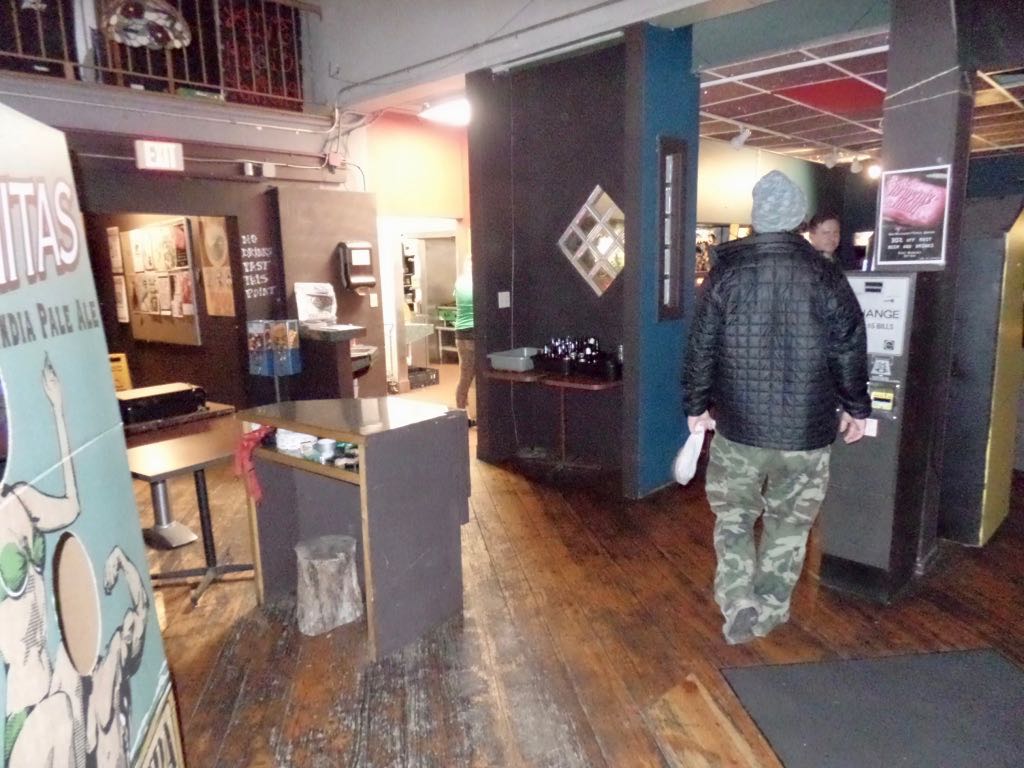 WVL, alas, was not on the winning team, but at least I have this 'The Babe Bows Out' shot of him leaving at the end of the night. He'd play in another season, before finally graduating and moving to ... I want to say Kalamazoo, for work. He's talked about coming in and playing when his schedule allows, but hasn't had the chance yet.