Please don't wake me, no, don't shake me

So, taxes are a thing which happened and which we've gotten sorted out. This year was another one where we got things under way later than we should have:

bunny_hugger launched into it in the evening hours before going to work, the day before the start of Motor City Fur[ry] Con, since why not add a bit more pressure and chaos to an over-busy week? We keep figuring to do this sooner in the year, and keep putting it off, because it's such an annoyance dealing with my two-state income-tax issues. So, you know, thanks, tax-prep industry, for forcing us to go through this.

bunny_hugger put our tax information together I realized: oh no. This could be really bad. Because we have for years consistently under-estimated how much should be withheld for New Jersey income taxes. It always seems like we're paying more than we ought to, but we can't find a thing we're calculating wrong, and the one time we brought this to a mall tax prep office they couldn't find something different to do either. And then I remembered how the fiasco of the Vichy tax shenanigans last year screwed up everybody's withholding. I got to worrying how much we might owe everybody, and this just as I got my personal savings up to a level I'm sort-of comfortable-ish with.

And, for once, the clouds parted. Entering all the forms was not so bad this year as in past years. And we did not end up owing money to everywhere. Indeed, for a wonder, we're getting refunds from the federal government, both Michigan and New Jersey, and the City of Lansing. That last one is baffling, since we didn't think our incomes changed that much 2017 to 2018. I said, jokingly, that the difference is we didn't have our big Pinburgh payouts bumping up our income this year. I'm not sure that it's wrong.

Nevertheless, I'm happy that, for once, I don't have to e-mail work to ask them to take an extra ten bucks a week out of my paycheck for New Jersey's needs. At least if we've got our withholding about dialed in for 2019. Goodness only knows.

Trivia: The United States calculating-machine industry produced about $20.2 million worth of accounting machines in 1944; a further $18.9 million in orders went unfilled. Source: Before The Computer: IBM, NCR, Burroughs, and Remington Rand and the Industry they Created, 1865 - 1956, James W Cortada.

PS: Now let's take a little look at a special pinball game, if I remember this right, which I do not necessarily. 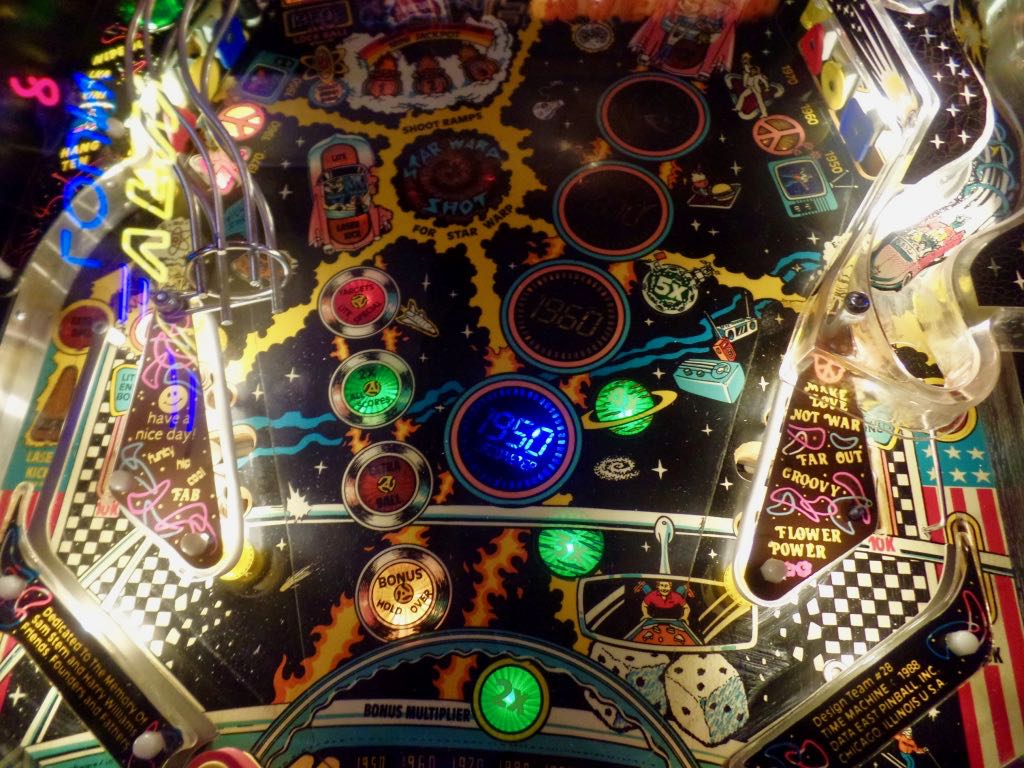 Lower playfield of Data East's 1988 game Time Machine, which is absolutely not an attempt to rip off Back To The Future. If I remember rightly this game has a special place in

bunny_hugger's heart as she occasionally tried to play the game in college, before she really understood pinball, and it was all right except that at one point the ball always got jammed and the game got stuck. In hindsight, she wonders if this might have been a ball locking, for multiball, and that if she had known to look in the shooter lane she might have gone on to ever finishing a full game. 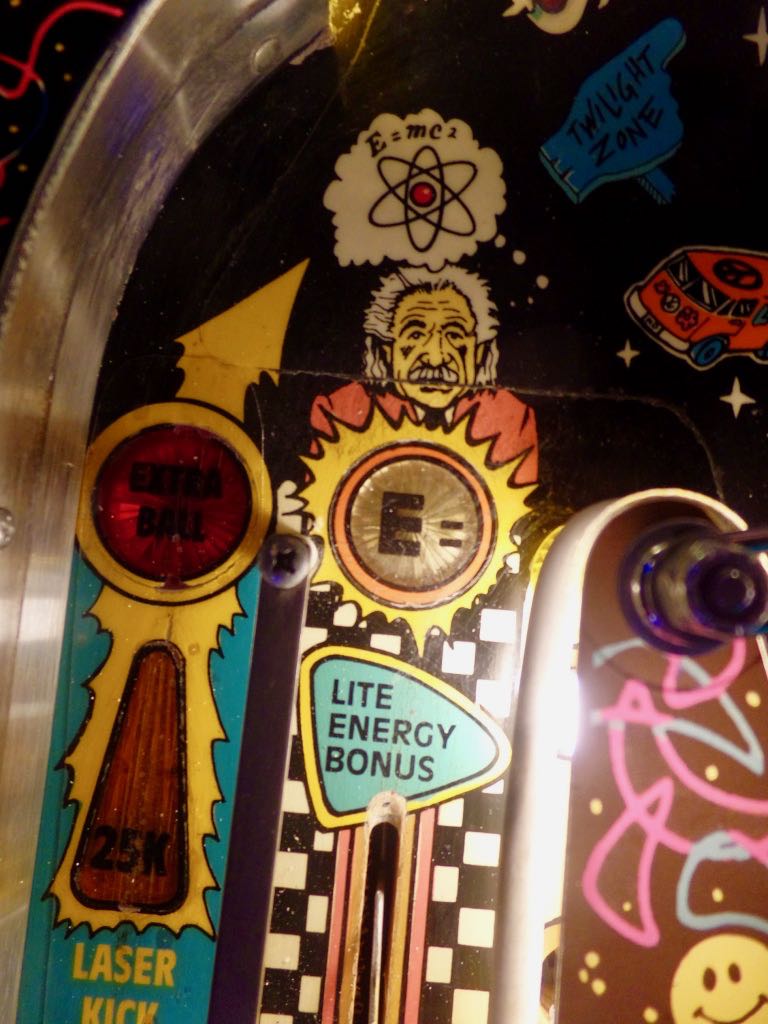 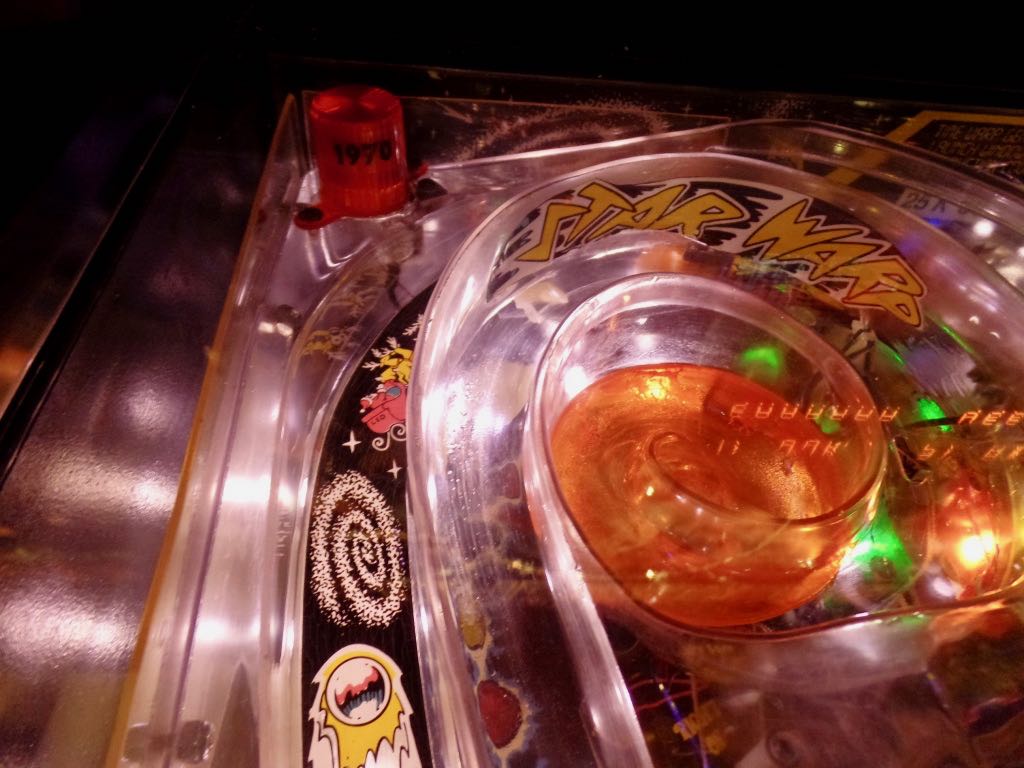 The ``Star Warp'' spiral at the upper left of Time Machine. Also lurking behind that: Santa Claus going into hyperspace. There were a lot of Santas Claus on pinball machines in the 80s.