Surely we said it was March the 10th

If we expected anything about Meridian-Baseline State Park it's that it would be empty. It's a tiny park near nothing but the intersection of county lines and 200-year-old surveying paths, and was opened to the public only four years. It was not empty. It wasn't packed, mind, but there were several groups of people. People resting in hammocks in the woods. People walking dogs. People curious what we were looking for, which we explained as ``frogs'', an excuse tolerable since there were 180 billion spring peepers there making a great noise which silenced when we talked, and which came back gradually as we stood silently still. People walking with their kids, who'd run a while and then fall down and cry. This would be a danger: it's bad form to leave a mysterious small package in a remote area while strangers are watching. Urban letterboxers have similar challenges.

Another thing we expected: that there would be a place to put a letterbox. We kind of knew going in that the north intersection point would be no good. Also there's a north and a south intersection point. Michigan's baseline latitude is broken, with the part east of the meridian --- the older line --- 935.88 feet north of the part west of the meridian. Nobody is sure why. But once you've laid out a baseline like this, there's no choice but to stick with it.

The land is marshy. This is because the lower peninsula is, geographically, a swamp that someone went and chopped all the trees down from. That someone is Americans, a project which started in 1837 and was complete by 1915. When the park was built in the 70s, both the north and south intersection points were marked with neat copper(?) discs inset in a small circular pyramid. Over the decades since the building and the opening, the land around the north point washed away, so it now sits like a flying saucer several feet above the swamp level. Part of opening the park was building a boardwalk from kind-of dry-ish ground to the concrete cylinders. There was no hope of placing anything there, although ``underneath the monument'' would be such a cool hiding spot, if a thing could be kept there. Also at some point somebody stole the north intersection's disc and it had to be replaced when the park opened. Yes, everybody wants to know who fenced a Meridian-Baseline Intersection Point monument.

Also why they didn't also nab the south intersection's marker. The ground for this one has not yet washed away. Nor has that disc been stolen. This would be the obvious candidate for a place to plant the letterbox. If there were a single good hiding place. In a forested area like this there's normally a bouquet of hiding places. Hollowed-out logs. Piles of rocks with a good little cavern among them. Fallen branches that form a concealed crater. And here? There was ... nothing.

There were a lot of constraints here, of course. We wanted someplace that didn't seem likely to flood. Someplace not on the main trail between the north and south points. Someplace that could conceal a sandwich-sized Tupperware-style container. Someplace that wasn't so far off the trail that people visiting it might form a social trail. Someplace that wasn't defended by too many thorny bushes. And we just kept on not finding viable places. We would go back to the car --- where I had rashly left the letterbox, when I thought the park was much smaller and nearer to the parking lot than it actually was --- and reinspect the north monument, out of the forlorn hope that maybe we had missed a spot and something in the marshlands would be not so terribly bad after all. Or that we might find a spot which maybe failed one of our criteria but was so good for the others that it was all okay.

But we did come out of this understanding why Meridian-Baseline State Park has a mere ``virtual'' geocache, in which you go to the spot and demonstrate you've been there (I think it was by counting the concrete pillars between the north and south baselines?) rather than by going to a specific location and getting a particular thing.

Oh yes, also. Michigan has a permit system to allow you to leave geocaches in state parks. This system was designed without awareness that letterboxes are a thing. And the system wants information, including precise GPS-datum coordinates, that we simply couldn't provide. This is why I am going to conceal the answer of whether we did find somewhere acceptable. I may not want it to be too easy for a state agent to find and dispose of our box, if it's there. Or to not face too directly the heartbreak of such a great location being unsupportable. Ask in confidential channels if you really want to know. 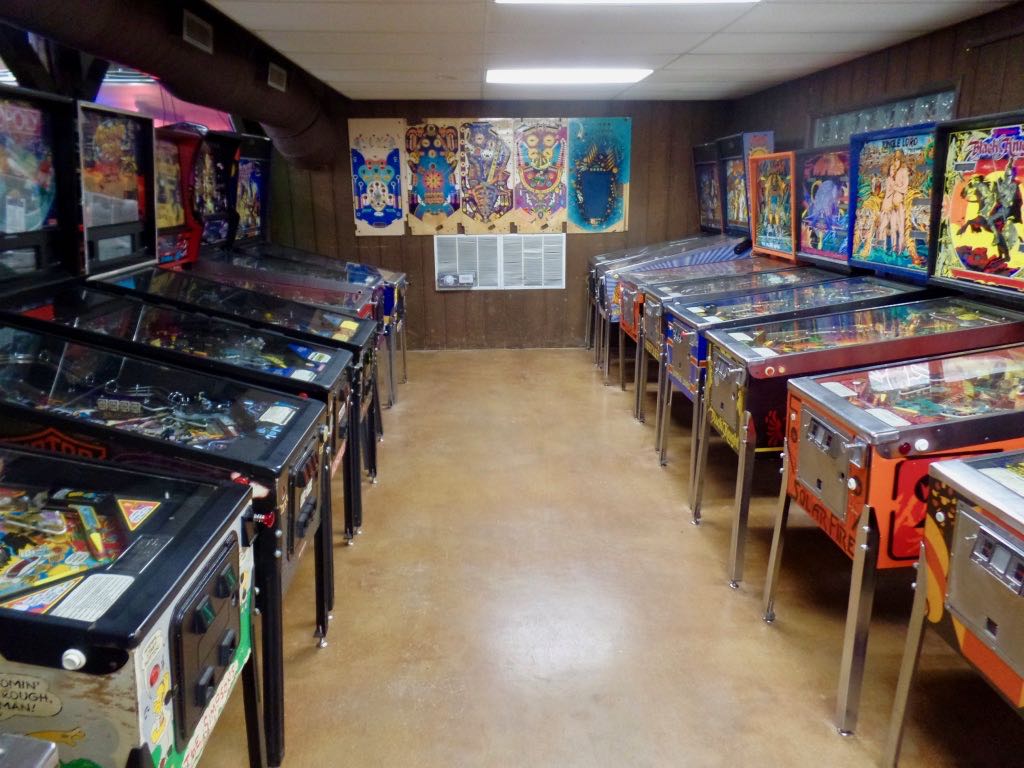 And then, like, twelve minutes after we got there the VFW closed for the night. Here's a row of solid-state games, a particular delight, mostly turned off. Notice there's pinball playfields hung as wall decorations, too. 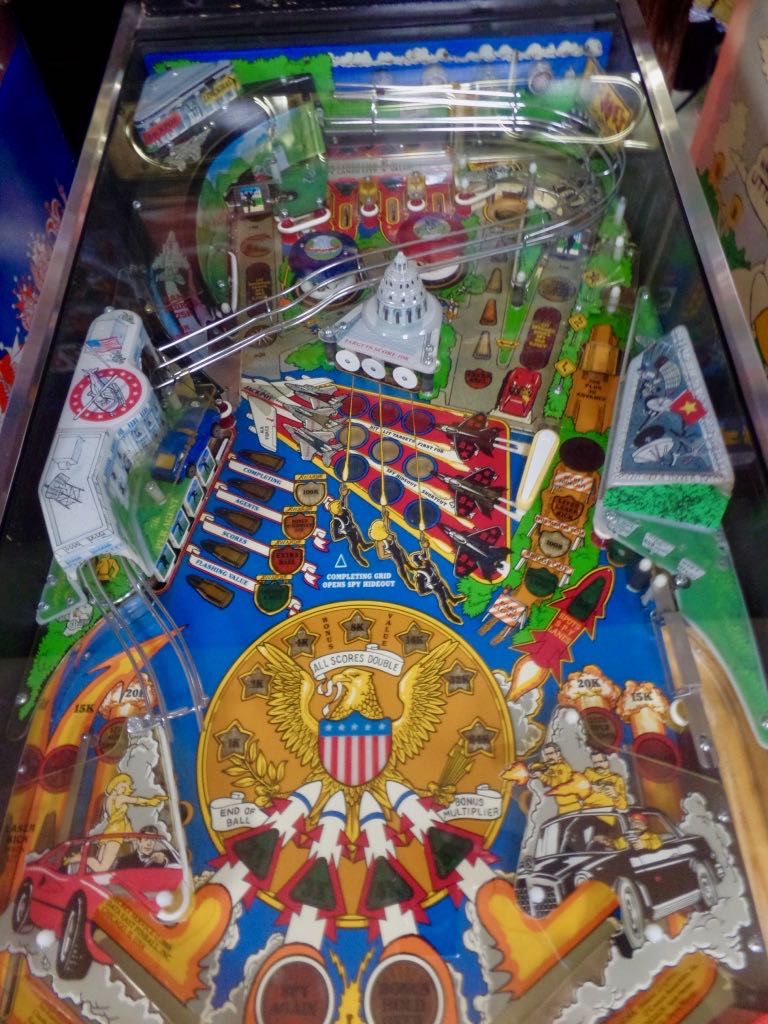 The playfield for Data East's Secret Service, one of the first pinball games I really got into as a young undergraduate. It's ... not a great game, since Data East never figured out how to make a rule set that had something like balanced scoring, but there's a bunch of fun shots, including the upper playfield flipper created by someone who thought he was Pat Lawlor or something. This is a correctly formed pinball joke so you shall now laugh. 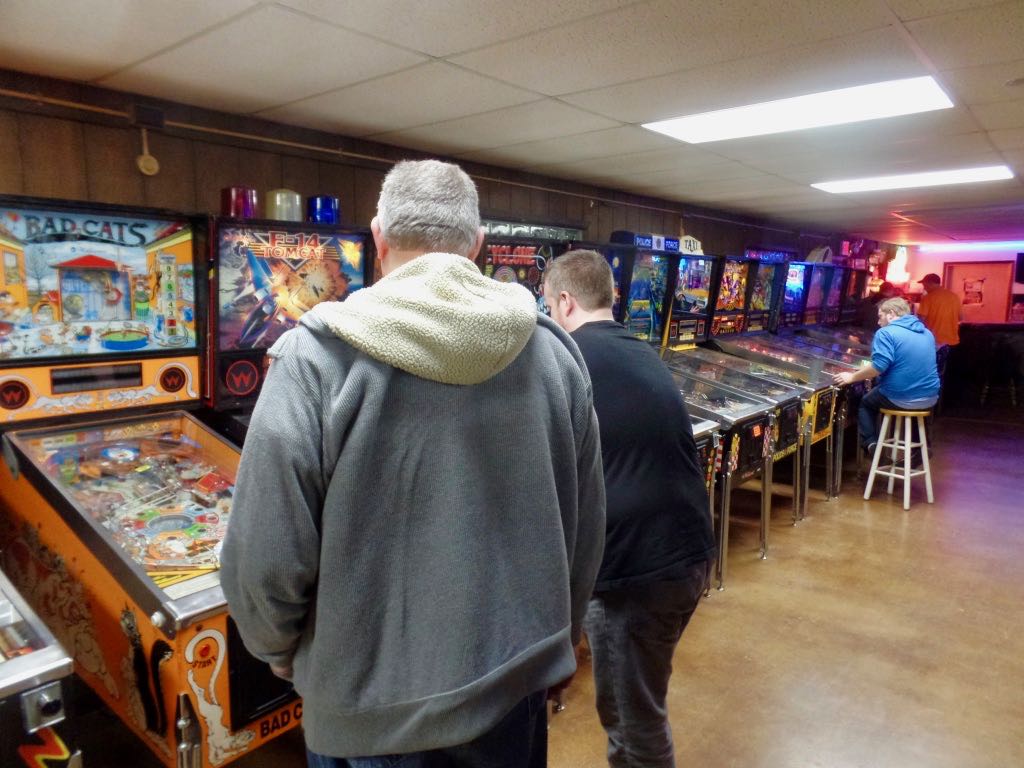 A couple of stragglers, caught still playing games at 10:00 when the night ended. Unfortunately for them, it's F-14 Tomcat.