But her biggest mistake is hanging over the fireplace

It's been, as the kids say, a heckin big week for us in nature around the house. This is why I'm skipping last weekend's events to reveal to you the astounding developments of Tuesday through Thursday.

So Tuesday morning I was walking into the dining room and noticed ... something ... out in our goldfish pond. Not goldfish. There are, if they survived the winter, eight goldfish there. But this was something on the surface. I looked out again, and went upstairs to get a view from the spare bedroom, and got my camera. There were ducks in the pond. Mallards, a male and female. Just sitting on the water, floating around, poking their heads into the water, sometimes dabbling. Sometimes just floating.

After a couple snaps I got to worrying: do they eat goldfish? That seemed unlikely but they might so I went upstairs to wake

bunny_hugger --- I've been rousing an hour or two before her most days, lately --- and gave her the news, which she responded to the way you might respond to someone who woke you about three-quarters of the way through your night's rest with breaking duck news. But she thought that it should probably be all right because she didn't think mallards would bother with goldfish and also how the heck did they even find our pond? There've been many creatures finding our pond, including some interesting birds, but those have been, like, Cape May Warblers. Not waterfowl. 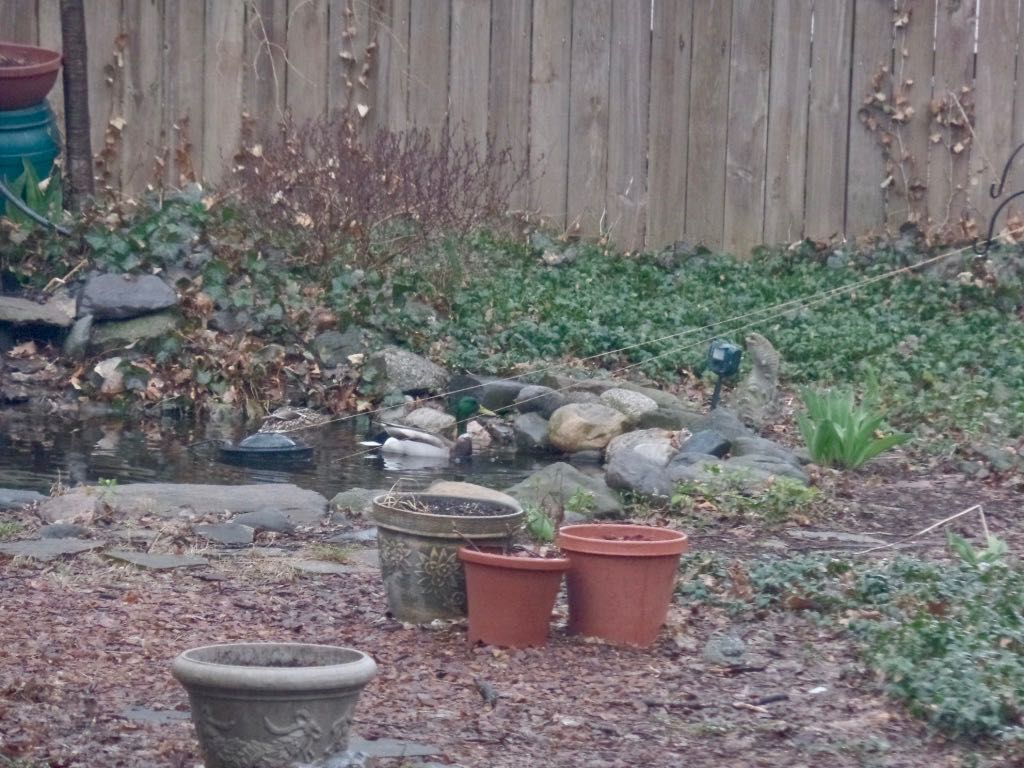 This is more or less the first thing I saw: the pair floating around and maybe getting annoyed by the pond heater. From upstairs I got to see the female dabbling, and also just how much of a smeary distortion there is in the window up there. It's an old house, show some respect. 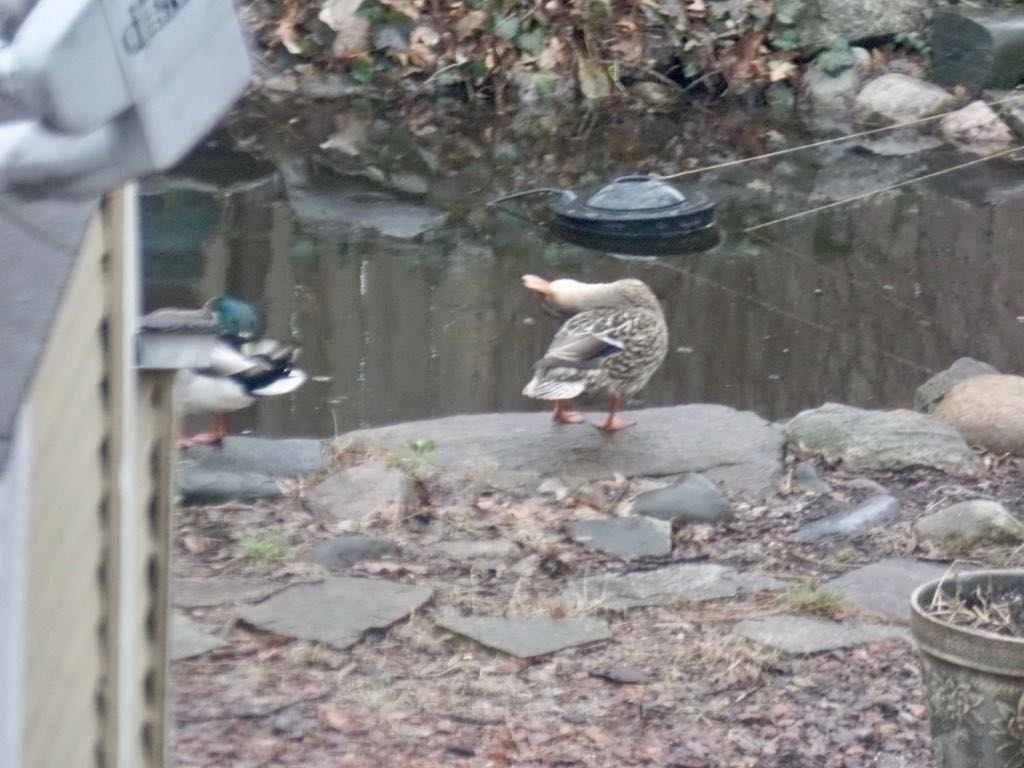 My best picture of either duck gargling.

The ducks spent maybe 45 minutes around the pond, after I noticed them. They spent like twenty minutes of that just standing by the edge of the pond, then jumped back in and did a little more swimming and dabbling and splashing about. And then they got up, tromped through the yard, and left. Which is their business, but which hurt

bunny_hugger as she'd only just gotten awake enough to go looking. She had assumed they'd spend the whole day there, or at least hours. 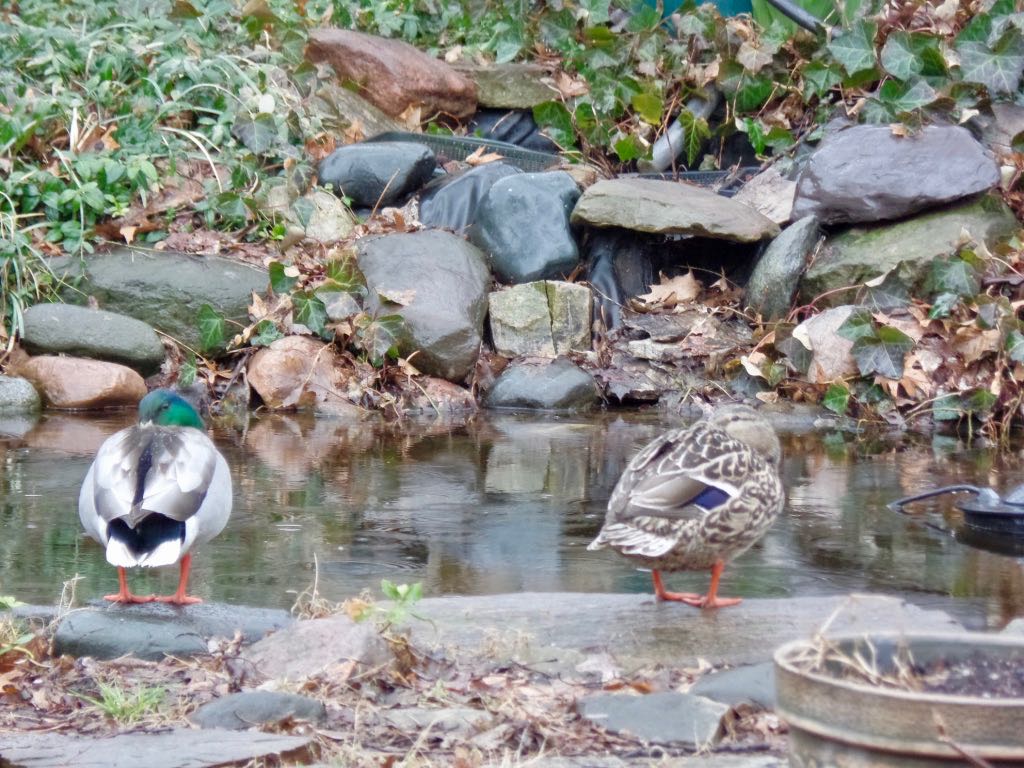 And then I ventured outside. I was maybe fifty feet from them, but, I buy my cameras for optical zoom. They spent a good while standing by the edge of hte pond like this. 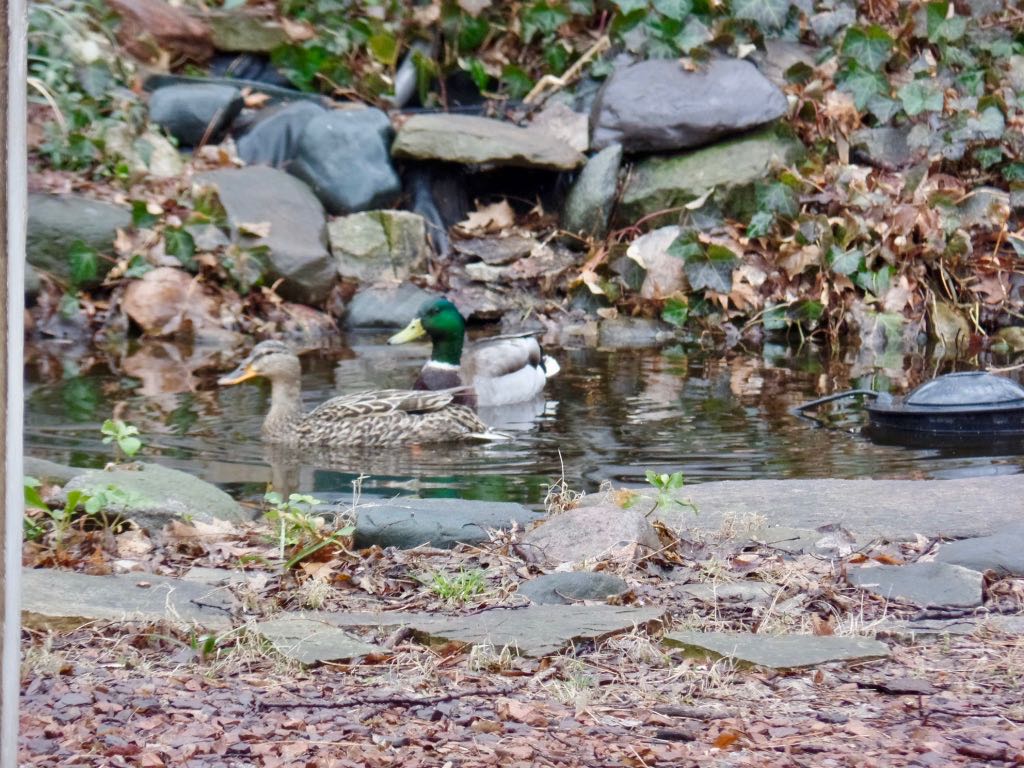 And here the pair are just floating around again, enjoying the waters. 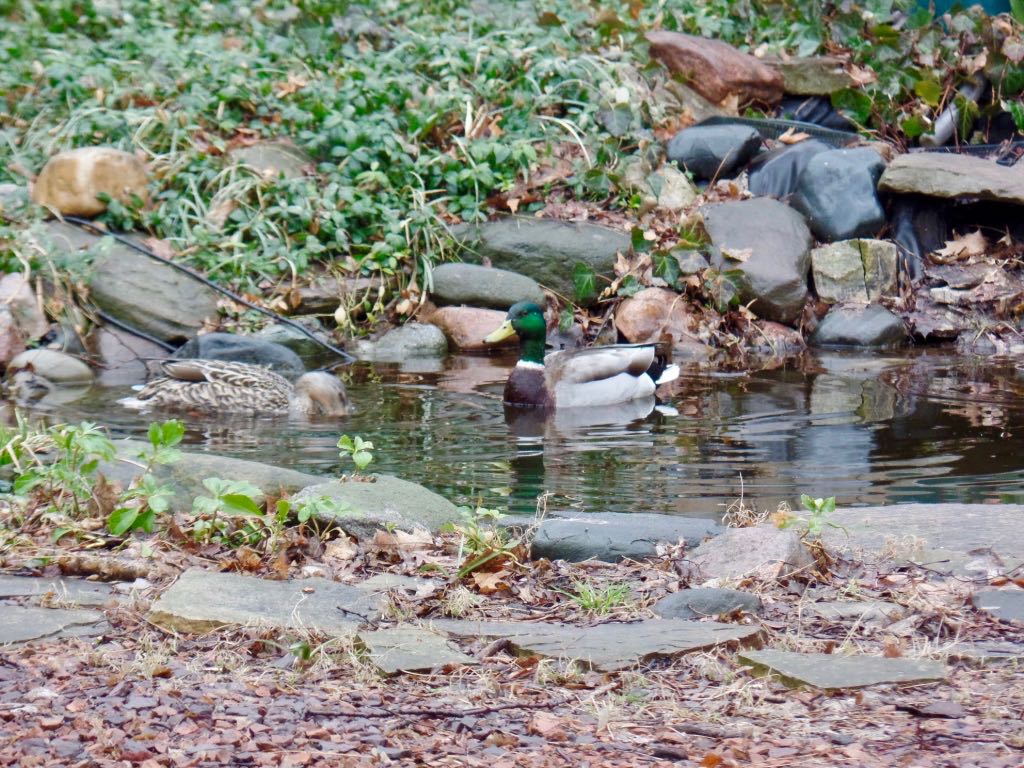 I didn't see the female dabbling any further, but she did poke her head underwater some. 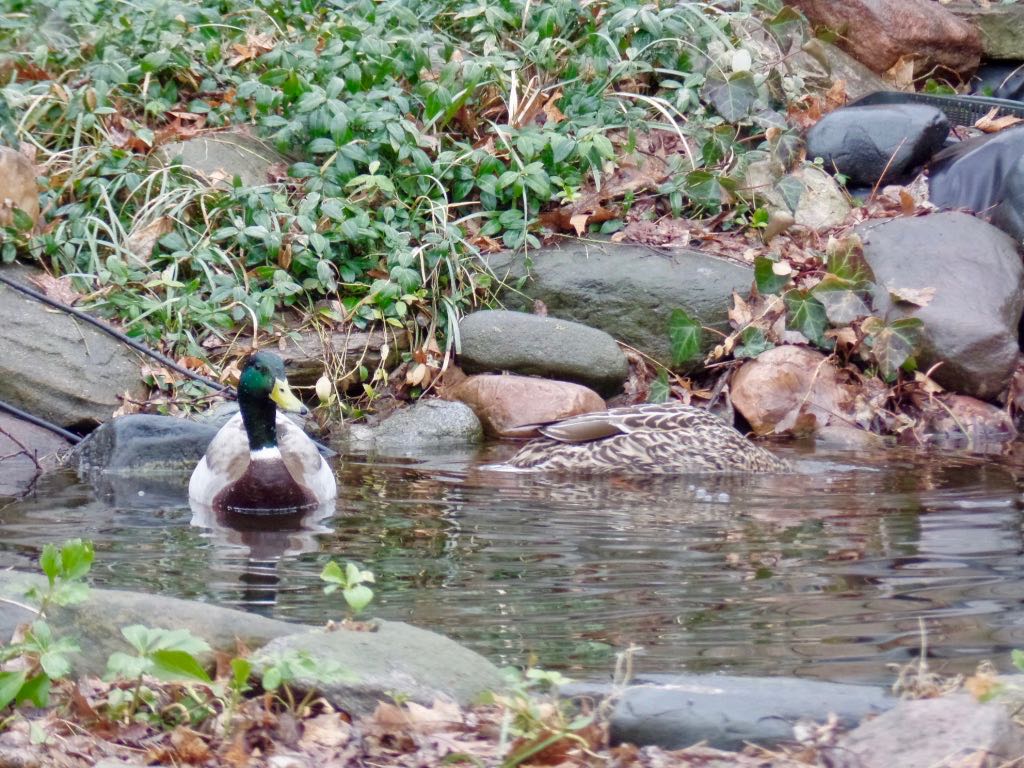 This is fairly near the water filter, a foot-cube plastic crate with rocks inside that's grown a lot of algae over the years.

Since then I've been looking out the window obsessively, naturally enough, for signs of seeing them again. No sign yet, but on Thursday the big plastic heater that was sitting in the center of the pond had been tipped over. That is, it was resting on its back. It's a very bouyant thing, and it was tethered by the power cord and by some twine hooking it to a post at the edge of the pond. It would take some big disturbing thing to knock it over. And it hadn't been upside-down Wednesday. (I've since taken the heater out because it's not getting cold enough to freeze the pond over anymore.) 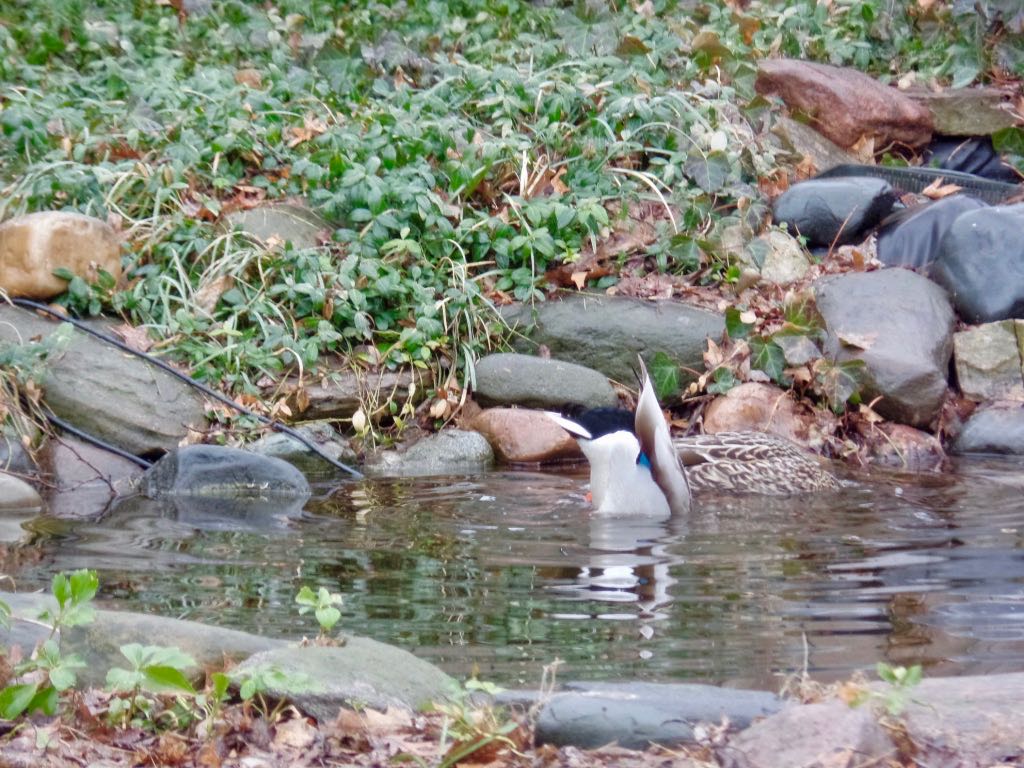 Now the male tipped over so often and so long you'd think he was designed to do that or something. 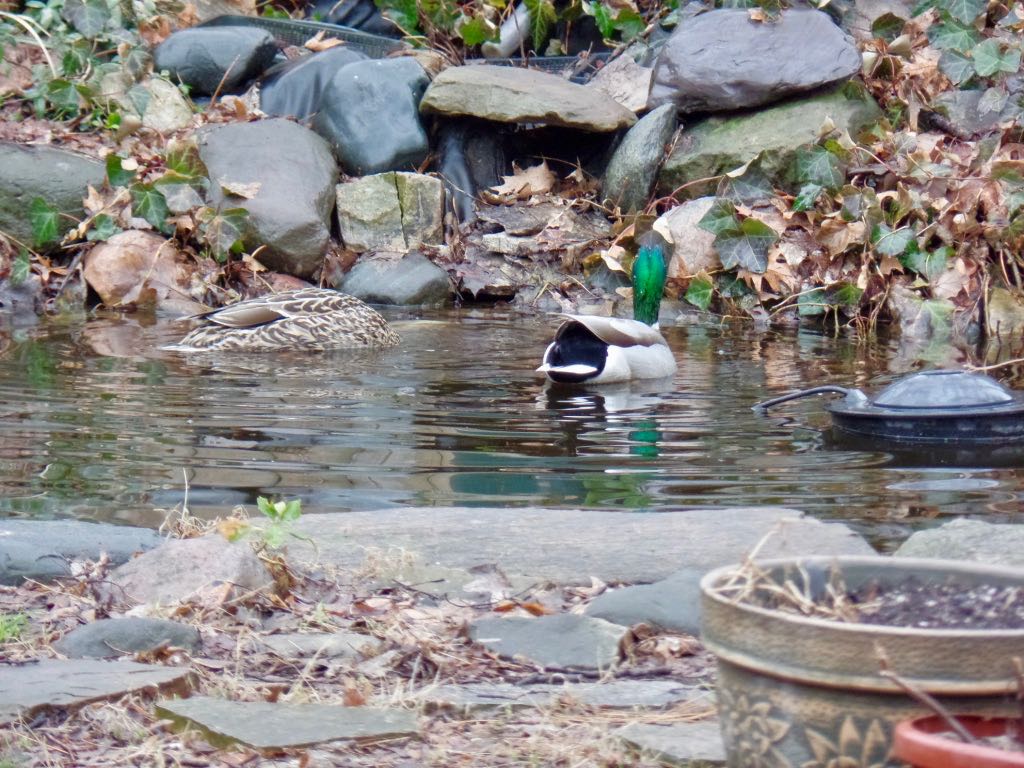 Ah ... say ... does the female there need any help? She's had her head underwater kind of a while now? 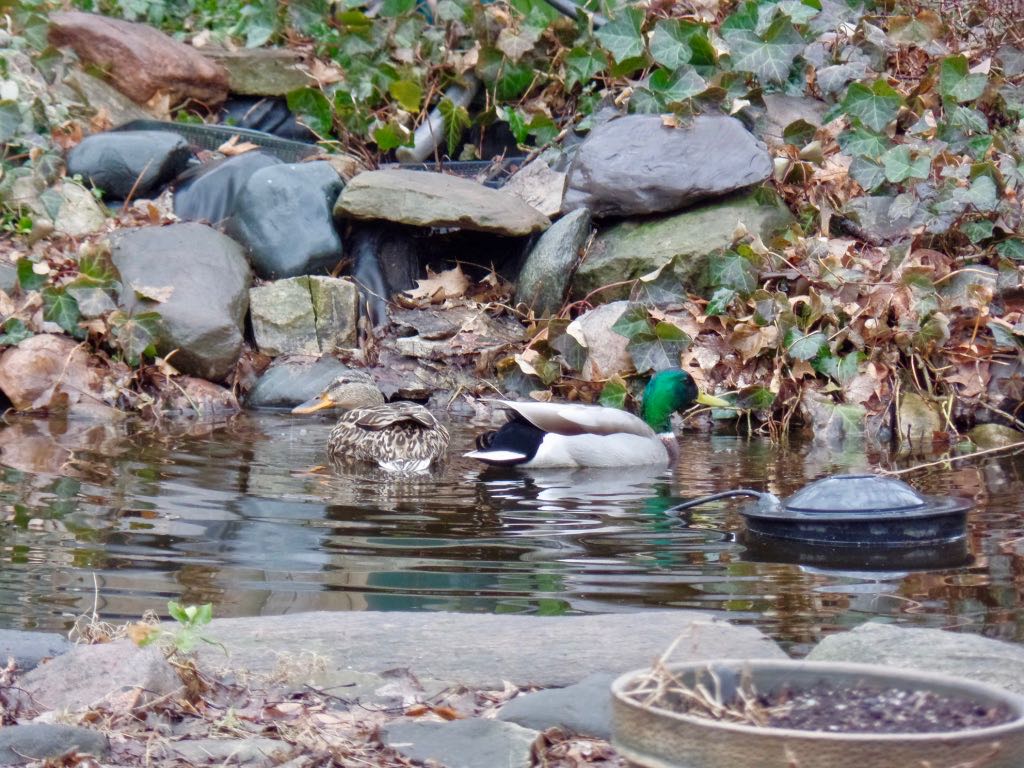 Also on Thursday I saw that at least one of the orange goldfish who'd weathered the winter was still out there, swimming fast and looking quite large. It registered no comment about the duck situation. 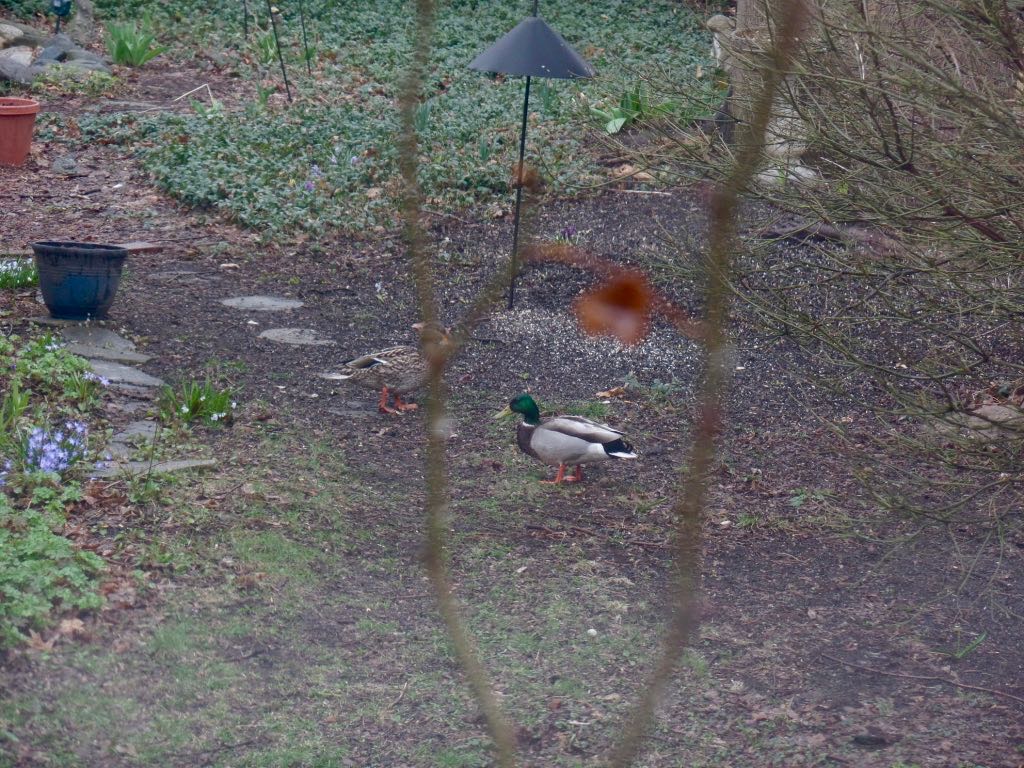 After a good 40 minutes or so they got out and walked across the backyard, inspecting the side garden and the flower bed. 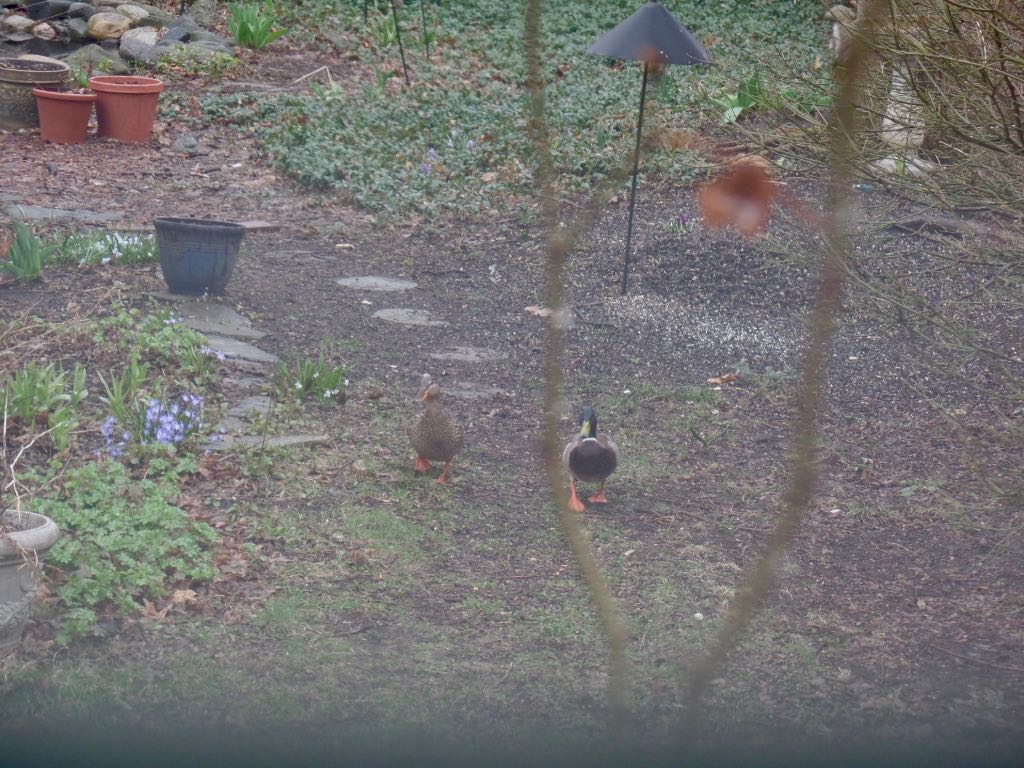