If you can't dance too

Our Motor City Fur[ry] Convention story begins this year the day before.

bunny_hugger's parents would take care of Sunshine. Ordinarily we'd bring her down before then, possibly me by myself the day before or the both of us together early the Friday morning of the con. But we already had an overburdened schedule, especially as

bunny_hugger is teaching Monday-Wednesday-Friday this semester and that's just been eating all her time and energy. But also

bunny_hugger's father wanted us to take stuff for the garage sale that he's a million times more enthusiastic about our holding than he is. So, her parents came over instead, the better to drop off a car's full of stuff. And to save us a good bit of driving time to bring our pet rabbit places that, really, she would rather not be bothered by going.

There were other motives too.

bunny_hugger's father wanted us to watch a movie. This was one he had given me, for Christmas, on DVD and which he was quietly anxious we hadn't watched yet. He'd seen it --- twice, it turns out --- and wanted very much for us to like it too. So we sat down with a couple bowls of popcorn from Horrock's, the local farmer's market, and watched.

The movie was Gifted. It's a couple years old. It's built on the struggle for custody for a prodigious mathematics talent, between her grandmother and her uncle. The child was orphaned when her mathematics-genius mother killed herself. Her geniusnessocity is proven by her being able to calculate arithmetic really fast, which I'm all right with. It's hard to demonstrate mathematical ability in a way that people in the audience will understand; speed of calculation, though? That's something everyone can understand. It's fair enough to get the point across economically.

The inciting incident is her uncle finally enrolling her in public school. That the child --- and grandmother, and deceased mother --- were all mathematical geniuses is surely what made

bunny_hugger's father figure I had to see this movie, and more, had to like it.

And in the main I did. It's a pleasant movie. There's solid acting in it. I think the strongest was a scene between the uncle and his estranged mother, where they talk about her new husband, who's had his midlife crisis at the advanced age of 70 and in a weird way, going off and buying a dude ranch; the mother points out, it'd be so much easier to explain if he just had an affair like normal people. It felt nice and lived-in, people who've had a long time arguing with each other talking over the stuff they can still shake their heads about.

The mathematics in it is legitimate enough, something

bunny_hugger's father wanted explained a couple times. This included a scene where a university professor, examining the child, puts up a calculus problem with a deliberate error in it, to see if the kid catches it. There is a handy Macguffin involved --- the dead mother having had, she believed, a major result in the study of the Navier-Stokes equations. These are differential equations that describe viscous fluids, and belive me, we need all the major results we can get in them.

bunny_hugger's father needed the reassurance several times over that yes, they were real things, although what they were, and what the breakthrough was, doesn't matter to the story. That there was this breakthrough accomplished made the mother's suicide more sensible to me, though. To know the moment that you've had your greatest accomplishment ever, and you have a half-century of life to remember that's in your past? I can understand not being able to face that.

So the movie is pleasant enough, but neither

bunny_hugger nor I loved it. (Also,

bunny_hugger was annoyed that the philosophy --- the uncle was a former Assistant Professor --- wasn't presented as well as the mathematics, so far as the mathematics was presented.) And I suspect her father was disappointed that we didn't love it.

Still, we got our rabbit taken care of for the convention weekend, and we had some pizza left over from dinner with them to give us an easy meal when the con was over, and we had easily minutes to spare to take care of things before, for her, class and, for me, getting my packing organized. And, along the way, her father saw the stray dog that's been prowling around the neighborhood and decided that he will adopt it, before I had even caught it.

Trivia: In 1959 more than 51 million passengers flew out of US airports. In the first two years of jet travel passenger figures nearly doubled. Source: Naked Airport: A Cultural History of the World's Most Revolutionary Structure, Alastair Gordon.

PS: the University of Michigan was relocating its Museum of Natural History. It had been in this one building, the Ruthven Museums Building, forever. But in December 2017 it would close, and

bunny_hugger wanted one last visit to this staple of school field trips and look with amazement at the old-fashioned dioramas with now-hilariously-out-of-date text. And, for me, a first visit. So here's that trip. 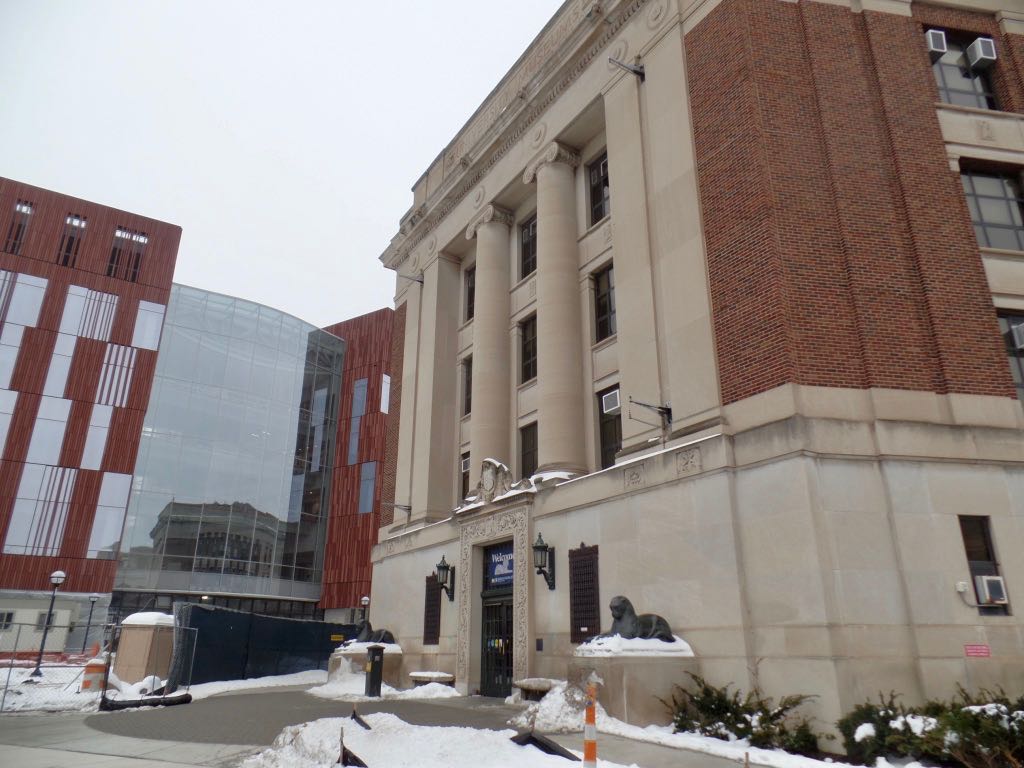 On the right, the Ruthven Museums Building, the lovely aged structure that's losing its Natural History Museum. All the U of M museums, at least the public faces, are being consolidated in, I think, that less-interesting building on the left. It should provide more space but I just bet they have stuff explained by computer screens instead. 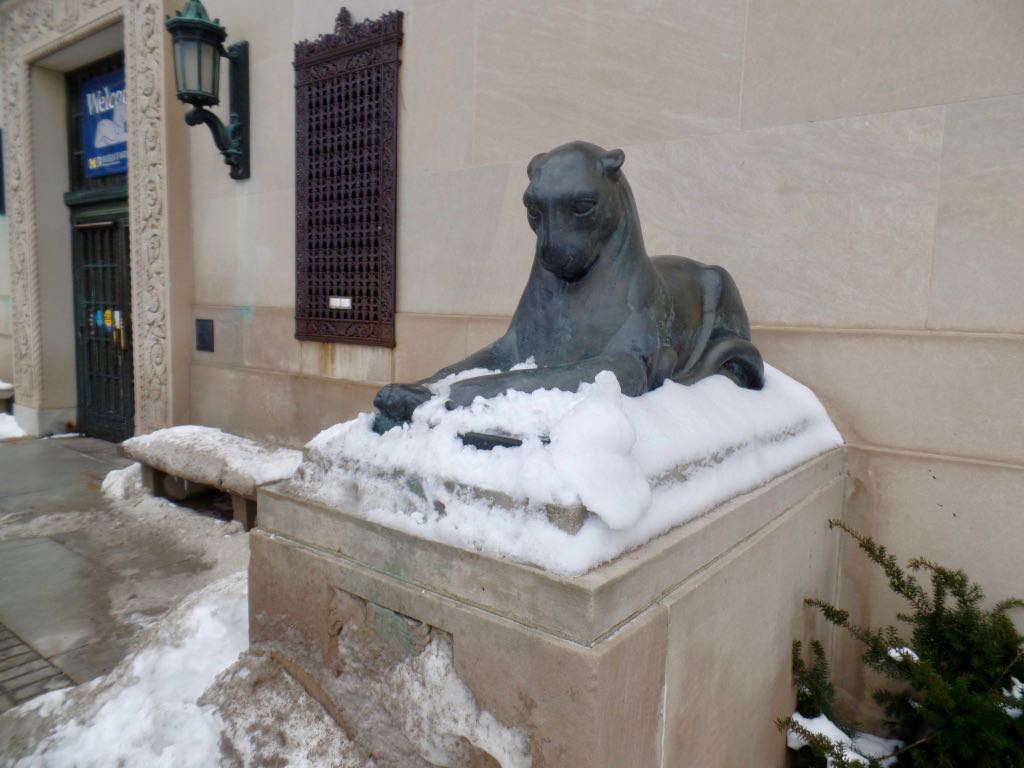 Puma sculptures. The museum's been flanked by two of these stylish cats since 1940 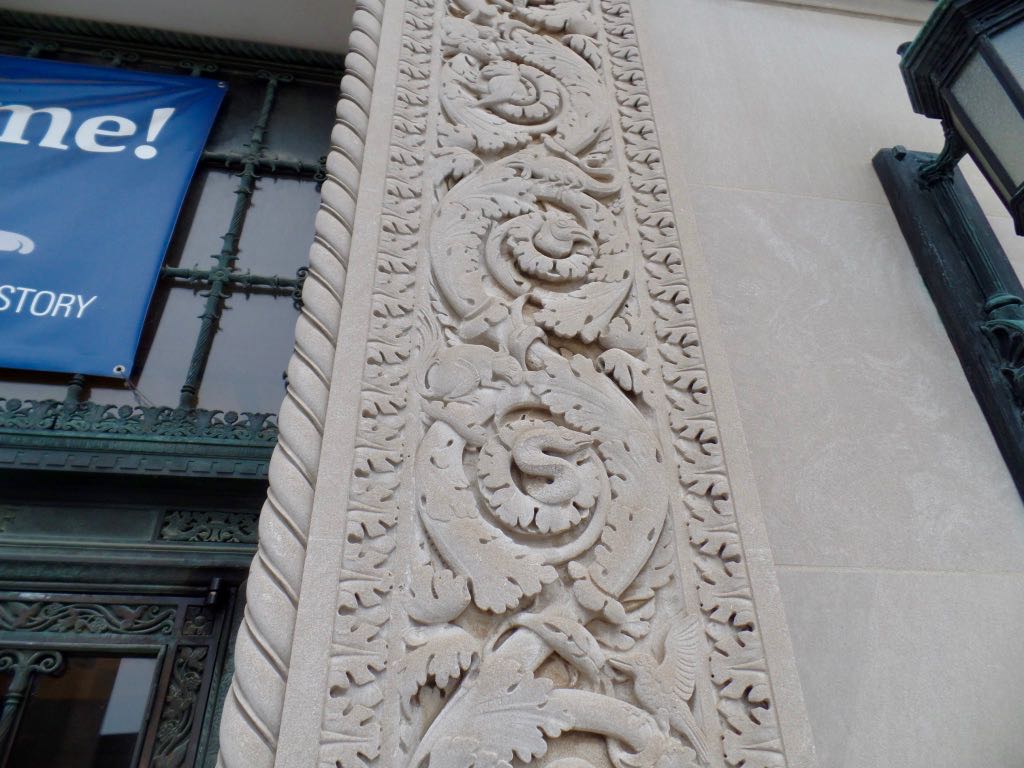 Some of the lovely intricate web-of-live stylings of the frame around the front door. It's the kind of architectural feature we just don't get to enjoy anymore.