I stopped an old man along the way

We have some traditions. One of them is our brief Convention Season, which the last several years has been Motor City Fur[ry] Con in Novi in April, and Anthrohio in Columbus in May. We've survived some changes in this, like Anthrohio taking on that name after shedding Morphicon, and moving to the end of May. But now we had to face a new change of tradition. Motor City Fur[ry] Con moved. Not in date, but in location.

And we missed the four-nanosecond window when con hotel rooms were open. But

bunny_hugger found a Candlewood Suites near the con hotel. It's part of the same loyalty card program, so, we're still getting points and building eventually towards a free Anthrohio stay. And the Candlewood Suites in Trenton, where I stay on the rare occasion they want me around, was great. So we got out my satellite navigator and did my best. I entered the wrong address: we ended up at a Comfort Suites. The Comfort Suites was listed as an alternate con hotel; Candlewood was not. It wasn't hard to get there, though, as the Candlewood was not a mile away from the con hotel, and we just had to cross the highway on the elevated bridge and use the surface streets to get there. Southfield has this Detroit-area specialty of highways built below the surface grade, but still open to the air, with one-way service roads lining the highway at surface grade. It's all logical, although it can be annoying to drive.

The Candlewood ... didn't make itself easy to love. We got a nice top-floor room, which promised at least we wouldn't have people above us running around all night. It smelled vaguely of smoke. Not bad enough that we wanted a different room, but bad enough we didn't want to be dinged for smoking in the room. So we reported it, and they didn't have us switch rooms, so we realized we knew a way to ditch the smoking-in-the-room charge here. But the faint smoke was a minor problem. There'd be other ones. Like, the elevator had this unsettling tendency to come to a stop an inch or so above or below the floor level and then, after the door was open, suddenly jolt up or down. Or, there were times we smelled people smoking pot. We get enough of that at home; we didn't need this either. The room air conditioner, too, was the subject of great debate: was it conditioning the air? And if so, in what way?

And then there was getting to the convention hotel. It was a great, easy, straight shot from the convention to our suite. On a one-way road. Getting back? The satellite navigator thought it wasn't long at all, and I suppose it wasn't. But it was going against the grain of one-way streets. My satellite navigator took us on a twisty path that included getting onto I-696 just long enough to get back off. And then along a surface street that included two traffic circles. This included one traffic circle where the directions were to take the first exit, while the map showed 'go straight ahead', while there was another exit on the right. This was for a shopping mall, though, and not a side street, and so my navigator --- with maps I had just updated that week --- pretended it didn't exist, leading to a tense debate between me and

bunny_hugger regarding whether we were already lost.

We would get better about getting back to the hotel. We would go back and forth to the Suites several times, and eventually I worked out a different path that wasn't baffling and difficult. Nevertheless, compared to the old hotel situation --- where we just crossed a busy but non-highway road --- this was markedly worse. We also kept having trouble finding decent parking. The new hotel has a big parking garage, although we didn't know that it was free parking. We found, eventually, space on the open, surface parking lots. It was just a good bit away from the hotel, but that was all right, at least until the wind started blowing. The hotel was not actually blown out of Southfield and into Novi over the weekend, but not for the weather's lack of trying.

Trivia: 1938's Short-Mayo Composite, the first commecrial airplane to cross the Atlantic, was a two-stage plane with a large flying boat that carried a smaller land plane. Source: Development of the Space Shuttle 1972 - 1981, T A Heppenheimer. 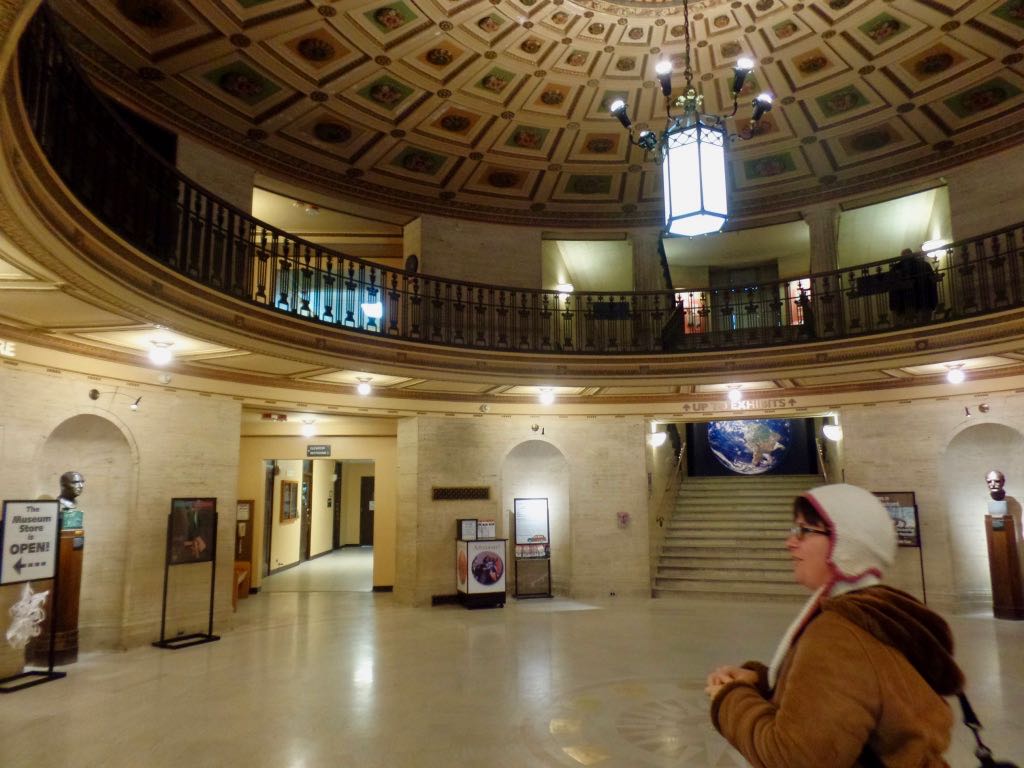 bunny_hugger stepping into the two-story rotunda entrance, with a nice view of the ceiling. 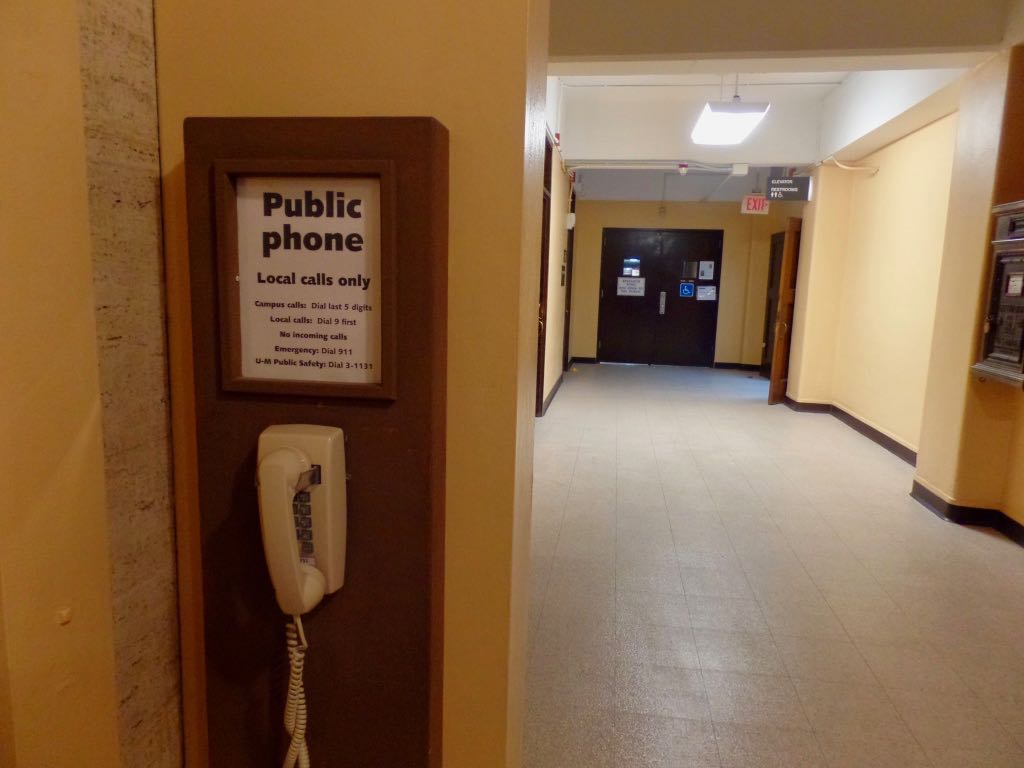 A public phone! And corded! With a cord that's gone and got all tangled up on itself! So you see this is a real historic museum and all that. 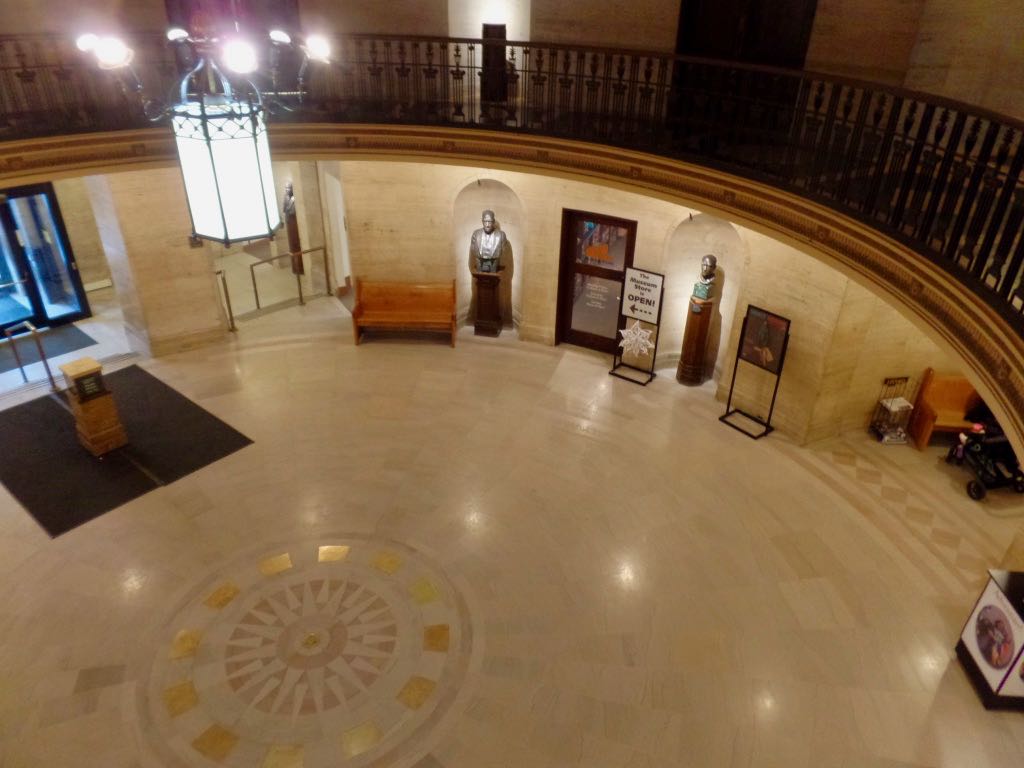 The entrance rotunda as seen from the second floor.